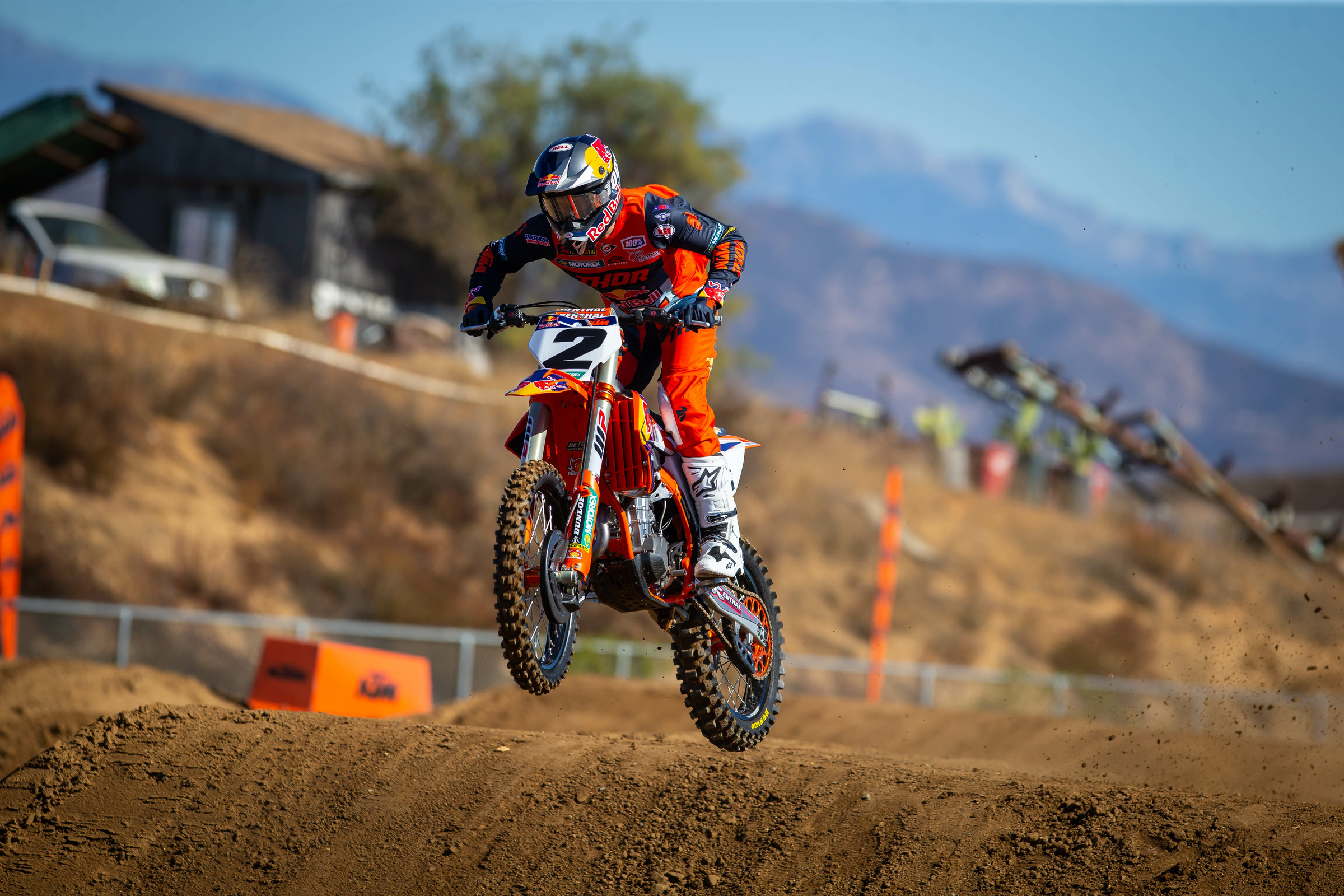 Red Bull KTM’s Cooper Webb has been away from the racing scene for a bit, as a back injury ended his 2020 Lucas Oil AMA Pro Motocross Championship campaign after just one round. Before that, he had a strong close to the Monster Energy AMA Supercross Championship in Salt Lake City, but Eli Tomac took away his #1 plate in that series.

Obviously, Webb wants to get that title back in 2021. We caught up to Cooper at the KTM Factory Team introduction last week at the team test track in California.

Is there any lesson you learned going into 2020 that you can apply to 2021? Or where you just sick and had problems that you couldn’t control? Are you looking at certain things you can do differently to get the year started right?
There was a lot more adversity next year, but you’re always learning. You’re always trying to get better. Competition is always getting better and there’s more guys. I feel like last year I really nailed the end of the season, and even before the Dallas [Arlington] crash I felt like things were clicking right before San Diego and stuff. I think last year I was sick so I started off a little slow. That’s something that we want to fix, we want to come into this year ready to go, especially with this schedule. It’s a lot of racing in a short amount of time, a lot like Salt Lake. So that will be important. It’s nice that we have the same bike. Right now I’m riding the same bike from Salt Lake. It’s nice to have something you’re familiar with so you can do your laps and not have to mess around with your bike.

Well that’s key. Everyone liked the Salt Lake format but that was late in the year when everyone had their bikes sorted out. Every year after Anaheim 1, someone struggles and they freak out, and then it’s back to the test track to try something new. But with three-straight races in Houston, you can’t do that!
No! And I think that’s the gnarly thing about this year. The first five races are within what, eight or nine days? Yeah, so you have to come in on it, you have to be ready, and you have to know what you’re on and what you like. I don’t even know if there’s tracks we can go to to do any riding during the week. It’s a lot different, but everyone is dealt the same cards. It’s still a 17-round series so it’s still long. I’m happy with that. I was afraid it would be a shorter series with all the crap going on, so it’s nice to get all the rounds in…hopefully.

Yeah, it’s funny. You don’t get any more insider info that anyone else. You’re just hoping for 17 rounds just like everyone else.
I was completely unplugged during the month of October. Ian [Harrison, team manager] called me and said, “Hey, they announced the schedule.” So I went and checked it out. That’s how I found out. No insider trading here!

Okay let’s talk about the back injury. You ended up missing all of outdoors after round one, but I don’t think you were looking for a break, because you did all the work leading up to the opener and you raced it. Then in August you gave us an update, and it sounded pretty bad.
Yeah, it was one of those things, I mean, I had just been just managing it since Dallas. We hurt it there and it was getting progressively worse. Preseason for outdoors, it was getting worse, but it would be bad on one day and then it would be fine the next day. It was one of those things, it was bad, but I just wanted to go race. I tweaked it again at Loretta’s and that was really all she wrote. We went and got an MRI the Monday after Loretta’s, and we said if the MRI was worse than it was before, we’d be done. Well, it was. Ended up with a torn nerve in my back and three herniated discs. I’ve never dealt with anything nerve or back related in the past. It was pretty frustrating, I’m used to dealing with broken bones where it’s, “Hey, six weeks and you’re ready to go.” This took me out of outdoors. I was really able to take some time off, I think it was 15 weeks off and 12 of those were physical therapy every day. I feel really good, though. I think it was a blessing in disguise. I learned a lot about my body, what I need to do to keep things moving and prevent these kinds of injuries. So 2020 was definitely a tough year. We still ended up second in the supercross title so that’s nice, but we’re looking for some redemption in ’21.

So you recently got married. Where you able to get a honeymoon in during all this stuff?
Yeah even with COVID[-19] we were able to go. Got married and had a honeymoon, had a nice relaxing week. Now we’re back into the racing mode.

So not going to be any slower now that you’re married?
[Laughs] No! Hey, the guys at the track today said I’m going faster. So we’ll see!