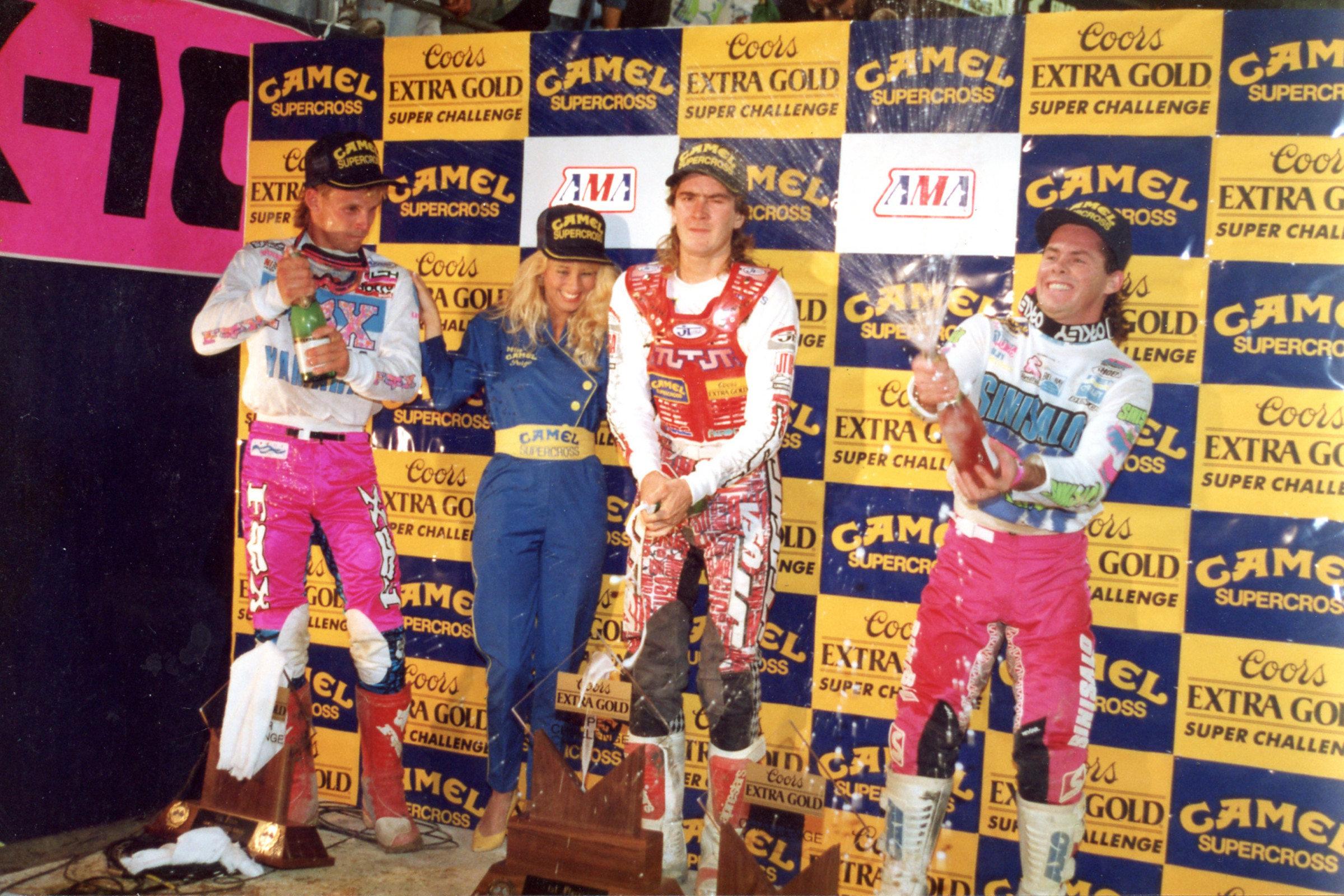 Our old friend Denny Stephenson, the 1990 125SX East Region Champion, has re-launched his old fantasy league under the name MotoXDream360.com. It’s a rider salary-based fantasy league, and it’s free to play. During the off-season, they’ll run a four-week series to keep everyone entertained using…old races from the 1990s? How’s that going to work?

Denny explains below. If you want to play for free, go to MotoXDream360.com to sign up, the early 1990s series starts Monday night.

Racer X: So Denny we’ve entered the off-season, and it sounds like you’ve cooked up something to keep them entertained.
Denny Stephenson: How this flashback stuff kind of happened, during the COVID[-19] break, we had nothing to follow—no sports, no racing, nothing—and I’m on a text thread with some friends of mine like Cody Gilmore, Checkerz Reisenberg from RaceTech and a bunch of other friends. We’ve played a pen-and-paper fantasy league for years, but now without racing we had nothing to play! I’ve played other fantasy sports, I’m in a salary league in football. I wanted to do a salary league in motocross, so during the COVID break, we decided to make one based on old races. Everyone asks, “Well how you run a fantasy league when you already know the outcome of the races?” Well, I’m glad to know everyone thinks I’m stupid enough to do that! We kept working on it and we have a way to make it work. What better way to watch some old races during the off-season?

So how does it actually work?
Well, I love the 1990s, as we all do. But we looked back at three specific seasons—1990, 1991, 1992—and we saw a lot of consistency over those three years. You had basically the same top ten in all three seasons. You know, Stanton, Bayle, Bradshaw, Chicken, Cooper, LaRocco, Kiedrowski, Wardy, Dubach, basically you had all of those guys in there in the top ten every year, and you didn’t have a totally dominant winner. You can’t pick a season with MC in it because he was so dominant. So we took the results from every race from 1990-1992 and entered it into our MotoXDream360.com database. Then the computer will pick races at random. That’s what makes it hard to win even if you know how those seasons turned out. You pick your riders for your team, but you don’t know what race the computer is going to pick, so you don’t know how your team will do.

There will be 12 races. We’ll run three races per week. Mondays we pick a race from 1990, Wednesday from 1991, Friday from 1992. All three races will create one round. We’ll do it for four weeks, so that’s 12 races and four rounds, four weeks. The computer will randomly pick a race. We also created salaries based on the total cumulative points for those three seasons. So we created a salary game based on old races, and I got a game that I’m in myself for once. It worked out really well!

Yeah that’s right. Denny Stephenson is in this! So you can’t just pick Stanton, Bayle, and Bradshaw and just call it good?
With the salary base, you get a $3 million dollar cap, and you have to pick eight riders. We have every rider who scored points in those races available. We found 75 riders that had scored points in those races. It’s so cool to see some of these old names in a fantasy database. But because of the salaries, you have to manage your money. You can’t pick the same riders for every weekend, too. You have to switch riders.

So you can pick an old team, watch the race, and get those same emotional highs and lows of fantasy?
Yeah, that’s why we don’t want to just post results, we’ll give you time to go back and watch. I will also post the old Cycle News race recaps so you can live through it that day. Just trying to enjoy this time between seasons. We remember how many great stories from this era. We had titles going down to the last race, it was good. Older guys like us maybe appreciate it and know it, but maybe we get some younger guys to look back.

By the way, this is a regular fantasy league once the season starts?
Absolutely. We’ll be ready when the season kicks off in Houston. You know, we’re the first to really do the salary league, which I’m really pumped on. I started MotoXDream fantasy back in the day, 20 years ago. Then I did so much with my friends here, again just texting back and forth and doing it pen and paper, my girlfriend was like, “Boy you really spend a lot of time on this!” So we decided to bring a league back. We had sold off Moto X Dream, then it was sold off again, and then PulpMX [Fantasy] took some of that concept, picking four riders, handicaps, and things like that. They’ve done a great job, so I thought, “I can’t just come back with the same thing.” So we have the same three of us that started MotoXDream back then, on a napkin, we got it back together and created this. Just a fun way to follow the sport. We actually launched it right before the nationals started this summer. We did a little three-race deal just after Lorettas and RedBud to kind of demo it, and it worked, so then we launched it for real for the final four rounds. It went well, we had a couple hundred members, we had some good giveaways. It’s all free. I just love the sport and anyway we can keep people entertained I want to do it.