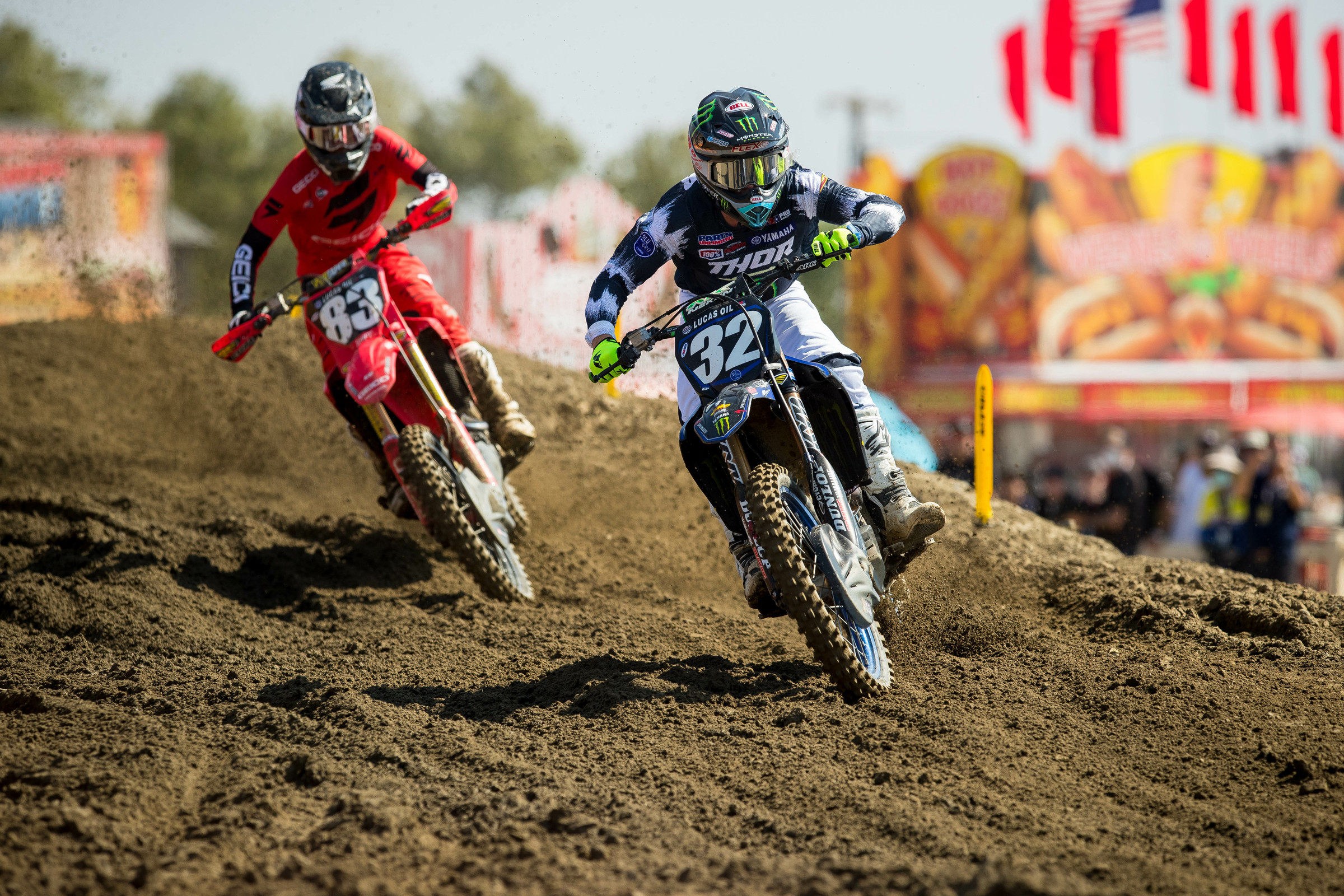 250 Words The Game is Changing

The GEICO Honda team is now gone, but they can be content knowing that in their time, they changed the game. As Factory Connection/Amsoil Honda, they reached into the amateur ranks and started signing riders and treating them like pros. Trey Canard and Justin Barcia then won big as amateurs, won quickly as pros, and soon the team became the hottest spot for top talent. The annual “who will end up on GEICO?” question permeated through the pits, and once that happens it gets easy. The good riders will come to you. That’s what has happened with Pro Circuit for years, it’s what’s happening with Monster Energy/Star Racing Yamaha today, and that’s what happened with GEICO for a while. The Tomac family ended up at Factory Connection Honda because the just knew that was the best team for them. When talent like that knocks on the door, you’ve already won.

So, imitation becomes the sincerest form of flattery. At one point it wasn’t just about what riders the Factory Connection Honda team had—it was about the riders the other teams didn’t have. FC Honda locked up so much talent that it became really hard for the other teams to beat them, especially in supercross. So, if you can’t beat ‘em, join ‘em. Eventually everyone was reaching into the amateurs. It was the smart play. Once you have a good kid, he rarely leaves the brand. Get them early, groom them, reap the rewards.

The Canard/Barcia/Tomac revolution happened about a dozen years ago. In the intervening decade, every major team has built a huge amateur effort off of the side of the pro team. This made sense on paper. But then a problem emerged. There might be one Canard, one Barcia, and one Tomac per year in the amateur ranks. Maybe there are two. But once five or six manufacturers are all signing kids, the math no longer works. It’s not possible to have six can’t-miss 16-year-olds racing at the same time. Think about it this way: three years of six prospects would result in 18 riders. Five years of six prospects would result in 30 riders. That means there’s not even enough room for all of these prospects to even make a single supercross main, and that’s not even including the fast riders outside of that five-year window, like veterans who stick around, or riders who come over from outside the U.S.

When you invest in that many prospects, they’re not all gonna hit.

We can all think of hotshot ams that came to the pros with factory rides and didn’t succeed. It’s become commonplace. But this process continued, because in this sport we don’t measure the misses that way. They don’t see prospect not panning out as a miss. The real miss is the prospect you could have had that someone else got.

Look, there was a time in this sport where very few riders could win races. Kawasaki Team Green snapped up Ricky Carmichael and James Stewart. They were amazing and won everything. These two are literally 1-2 at the top of the all-time AMA combined supercross/motocross career wins list. They raced in the same era and came up through the same pathway, with Kawasaki Team Green. If you didn’t get one of those two guys, you were probably facing zero chance at winning races, save for the small miracle that was Chad Reed, the only other rider in the world with the talent to battle RC and Stew on a supercross track. If you didn’t have one of those three, you were out of the running. That’s a grim reality to face.

So, those pathways become ingrained. If you take the “you can only win if you get an incredible super talent like RC or Stew” road you end up going nuts looking for the next big thing. Teams did this, and the Factory Connection Honda approach helped reinforce that. Or, you can take the “maybe we find a one-in-a-million foreign guy like Chad Reed” approach, which teams did over and over with countless Australians and French riders (they’re good at supercross) but never with Chad-Reed level results.

Anyway, that’s the model staring everyone in the face. Take it further. Roger De Coster saw something in Ryan Dungey. Dungey then basically spent his entire career riding for De Coster, even straddling two different brands! Kawasaki signed a young Ryan Villopoto and reaped all the rewards. This was the data staring everyone in the face. You sign an amateur early and if he pans out you win for life. Or you strike gold with a foreign rider. There is no other way.

Or, should we say, there was no other way.

It’s getting harder to scout which rider is amazing, too. The sport has grown more sophisticated and professional. In RC and Stew’s day, they basically went racing with mom and dad. Their talent stood out. Today, nearly every rider is groomed in a much different way than those guys—but in the same way as each other. They ride at some sort of full-time riding and training facility. Coaches and trainers are around. They will have factory equipment. This evens the playing field. Everyone is riding and training every day on great equipment. That makes for close competition and harder-to-predict racing. Carmichael himself told me he thinks supercross is harder to predict now (compared to his day, when the winner would be him, Stew, Chad, maybe Kevin Windham and no one else) because of the training facility. Everyone has a similar program now. Everyone knows how to train. Everyone does the same thing. Heck, a lot of the riders ride together every day! Of course, they’re going to be closer on the track on Saturday night.

That’s led to exciting racing and more winners than the RC/Stew/Reed days. Cool. But if you’re a team trying to decide which young kid to invest in, good luck. They’re all so close.

That’s not even the biggest change though. The biggest change is that those kids don’t always stay with the same brand. Kawasaki could have had Stew and RV for as long as they wanted (Carmichael did choose to leave Kawasaki but that was a strange era with a switch to four-strokes coming. And he did plenty of winning for Kawasaki first. When he finally broke Jeremy McGrath’s incredible stranglehold on supercross, he did it on a KX250). Dungey would never leave Roger. But that’s changed. Barcia was the ultimate Honda prospect. He lasted just two years on Honda’s 450 team before becoming a Yamaha guy much more than a Honda guy. Tomac left, also, and now he’s a Kawasaki guy. Ken Roczen has been all over the place. Same for Cooper Webb. Zach Osborne? How do you plan for or replicate that? Jason Anderson has been loyal to the Rockstar Energy racing crew but only because they were loyal to him—he had some rough early days when no one was predicting future supercross championships. Even today, Kawasaki has the amateur-to-450 program humming with Adam Cianciarulo, who was as can’t-miss as it could get. And yet he still almost missed! When talent struggles, there’s a chance they need a fresh start. They become available as free agents. Or they never get it back together and win.

I’ve been talking to a lot of team people about this. They know the amateur game is harder to scout than before. They know they’re spending more money than before. They also know as bikes keep getting faster it’s harder to know what minicycle hero will pan out on 250Fs and 450s. Because of this, they know talent could struggle with the transition. They would like to see these riders races more, in longer, tougher races, so they have a better idea of what they have. Because the transition to pro racing is so tough, they know some of the riders with talent won’t make it. Then know talent could break loose in search of a fresh start, a change of scenery or a different bike.

From what I’ve seen and heard, I believe fewer teams are going to spend the huge money on amateurs. The process might get more selective, and you might see more squads laying in wait, hoping to sign someone in search of a fresh start. Like RJ Hampshire or Shane McElrath this year. They were available. They started the year as title contenders. They won for their new teams. Osborne’s crazy case gives everyone hope. Justin Cooper’s rags-to-riches tale shows there’s talent lying in wait.

Now, I will take this entire story and drill down to the sharpest point. I believe there are just two riders left that still follow that old RC/Stew/Reed model. First, you have the one-in-a-million foreigner in Jett Lawrence, who proves it took 20 years to find the next Chad Reed.

The other guy? Austin Forkner. He’s the last vestige. Team Green kid, rolls through minibikes, amateurs, successful as a pro almost immediately. When Jett won at Pala, he was the first 17-year-old to win an AMA National since…Austin Forkner in 2016. Jett finished fourth in 250 Class points this year. Forkner finished fourth in 250 Class points his rookie year. When Forkner was ripping off weekly wins in the 250SX East Region last year, he was right on schedule. He was going to have some big 250 years followed by a trip to the 450 class for Monster Energy Kawasaki. If he kept on winning, he would validate the old model: lock him up early, get him in the pros, and no one can stop you.

Oops. He hurt his knee in Nashville, and everything changed. Now it’s Forkner’s old rival, Chase Sexton, who is the hottest prospect of that age group.

Forkner still has it. He came back this year not quite as strong as Dylan Ferrandis, but he mounted a late rally, even catching and passing Ferrandis for a Salt Lake City win. Catching and passing Ferrandis in 2020 is legit. Forkner tried to dig out the 250SX West title, but he crashed again at the final round. He’s now missed two-straight outdoor seasons. Can’t miss hasn’t quite hit.

There’s still time. If Forkner gets it back on track in 2021, and Lawrence reaches the expected heights, these two alone could preserve the old model: you have to get Forkner-level talent early, or you have to roll the dice and get the one-in-a-million foreigner that is a quick study in supercross. Forkner is the last hold out, and he’s teetering right now. Teams are already seeing a different path than the old one. Where will the next generation of 450 stars come from? They might come from same old places, but the path to the top might look much different.