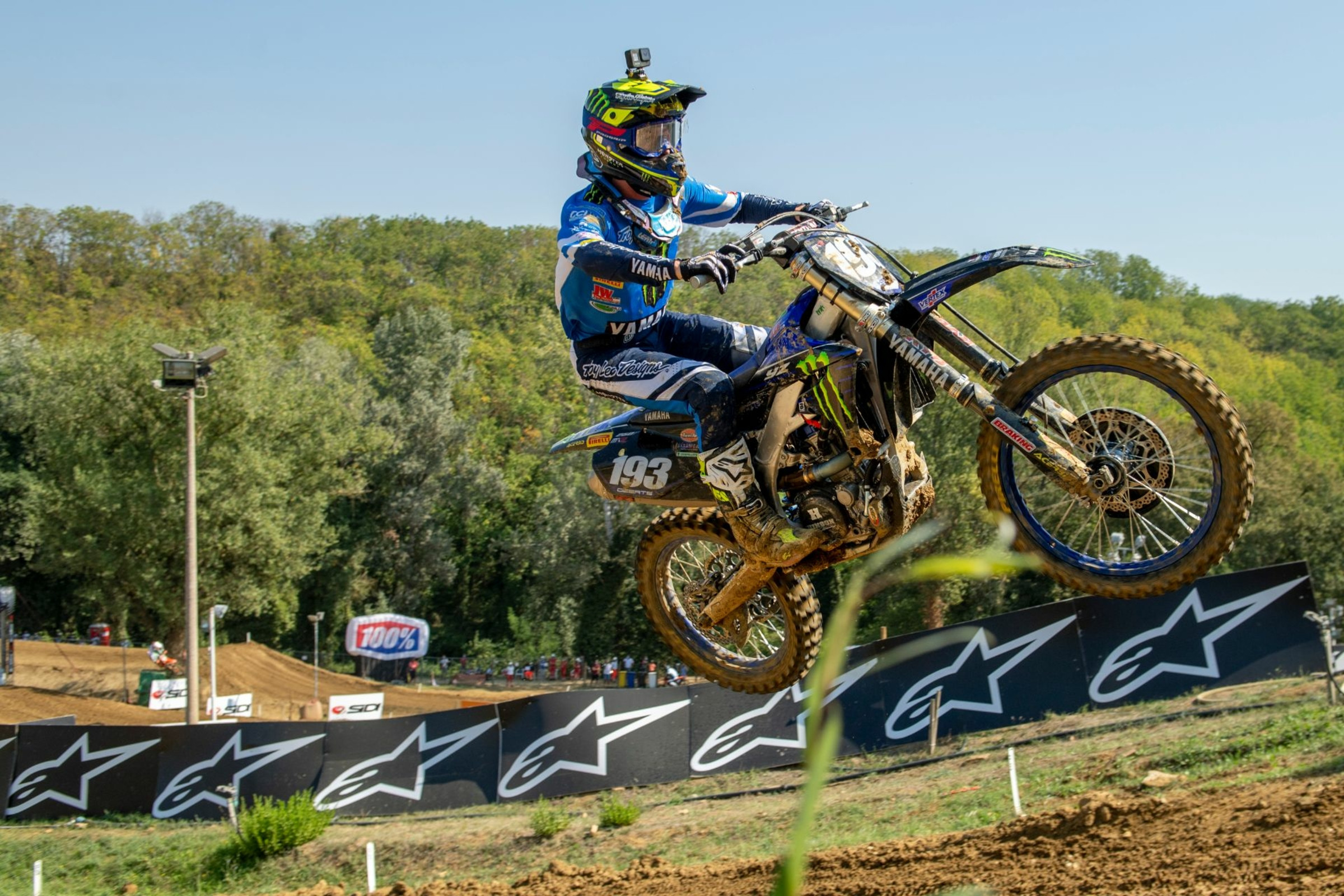 With a little visual aid help from the FIM Motocross World Championship Wikipedia page, it becomes quite evident that KTM has ruled the MX2/125cc Word Championship with an iron throttle fist. Going back to 2008 when Tyla Rattray inherited the title from Yamaha’s Antonio Cairoli (yes, Toni won the small bore title on a Yamaha in ’07), KTM has lost hold of the FIM Motocross World Championship crown on only one occasion and that was in 2015 when Tim Gajser snatched it away with the help of his Honda.

But that was then and this is now, and with the 2020 MX2 Motocross World Championship now slowly winding down to its conclusion, the motocross community is looking to Jago Geerts and the Monster Energy Kemea Yamaha MX2 Team to see if the one-two punch can high-center the Orange Brigade. A winner of eight MX2 motos thus far this year, Geerts is 21 points adrift of Red Bull KTM’s Tom Vialle in what has come down to a two man fight for the MX2 World Title.

That fight will continue this forthcoming week when the globetrotting FIM Motocross World Championship puts stakes in the sandy ground of the Mantova circuit for the MXGP of Lombardia, the MXGP of Citta de Mantova and the MXGP of Europe. Hosted by the Moto Club Mantovano and the “Citta di Mantova” International Circuit in Mincio Natural Park, the triple-header Grand Prix will be a high stakes affair for both the orange and the blue. Interestingly, and adding to the drama, late last week, word came out of Belgium that Geerts had hit the sand at the Olmen circuit and had tweaked something is his left shoulder. With the MXGP of Lombardia only a few days out and wanting to know the latest, we rang up Geerts and started firing questions at him.

First and foremost, how’s your shoulder?
Yeah, it’s getting better and better every day. I’m going to physio a lot and it feels pretty good right now.

What exactly happened?
I was training on Saturday and had a really big crash. For the first few minutes afterwards, I wasn’t really feeling that good. The pain in the shoulder came to me and we knew it wasn’t right, so we immediately went to the hospital and then we were able to see that I had a little crack in my shoulder blade; it wasn’t the shoulder blade itself, but in that area.

How do you feel now? Has the shoulder loosened up? Do you feel better?
Yeah, it’s a lot better than it was in the beginning, so I think it will be okay for this weekend.

Were you able to ride or train at all during the week?
I rode my bicycle today and I didn’t have much pain, so that’s a positive. For sure riding the motorcycle will put way more pressure on the shoulder than just riding a bicycle, but it’s already a good beginning and I feel pretty good.

You guys are about to head to the Mantova circuit in Italy for what will be the ninth, 10th and 11th rounds of the World Championship. What do you make of that circuit?
I’ve ridden there a couple times already. It’s a pretty small and tight track. The surface is pretty good, it’s a little bit sandy, it’s a nice track with a lot of jumps and most of the time it is good to race on. I think it will be good to do three races there and they can change the layout pretty easily, so I think it will be really nice.

How has it been to be back at the races in the last month? You and I spoke last month immediately after the MXGP community went to racing beginning with the MXGP of Latvia at the Kegums circuit and it was very evident that you were thrilled to be back racing.
It's really nice that we can be at the races again. It was a feeling I really missed as we were away from racing for a long time. The last couple months of the lockdown were really boring so it’s nice that we can ride and race again.

Thus far in 2020 you have won eight motos and been up on the podium in four others. How do you feel about your racing in ’20?
Yeah, I’m really happy with how the season has gone so far. Now with the injury that I have it will be a little bit difficult, but after a couple of weeks I think it will be okay and I’ll be back at my normal level again. For sure my goal is to do good at Mantova and to take some good points for the championship.

You’re only 21 points down to Tom Vialle in what has been boiled down to a two man fight for the MX2 World Championship. You can still win it, can’t you?
Yeah, it’s still pretty tight. Like you said, I’m only 21 points behind Vialle and there are still 10 races to go and the World Championship is still wide open, and I will fight to the last race for it.

Going back to an interview you and I did together last month, you mentioned, “Before the season started, for sure Tom was my main competitor. At the first two rounds we were already competitive with one another. The last three rounds at Latvia were really close between us, so I think it will be him and I fighting for the title for the rest of the season.” True to your words, it’s between you and him now. Do you guys know each other at all?
Yes, we’ve already raced together for a couple of years in the 85cc class. Yes, we raced together, and I’ve known him ever since. For sure last year he made a big step when he went up to the factory team of KTM and we were always battling together.

KTM and its motorcycles have won 11 of 12 125cc/250cc MX2 World Championships. The last time Yamaha won it was with Antonio Cairoli in 2007. A long time coming, eh?
Yes, it’s been a long time since another brand other than KTM has won the title, so for sure I will do everything for it and to try and win it. Tom and I are pretty close for it and I will do everything to win it and I hope it can happen this year. Yamaha and the team I race for is really good. The team owner and team manager are great. Marnicq Bervoets is the team manager and I’ve known him a long time as my dad was his mechanic when he was riding for Suzuki. It’s nice to have a good combination with the people and with the team and I feel really good in the team. The team is really professional, and the bike is good and for me everything is really nice.

Going back to Rene Baeten in 1957, the nation of Belgium has won 52 FIM Motocross World Championships: 24 500cc, 18 250cc and 10 125cc FIM gold medals. All that withstanding, a Belgian rider has not won a title since Steve Ramon got the job done in 2008. Has the national sporting media in Belgium picked up on your title fight?
Yeah, there is more and more media attention coming and that’s really good because we need it in Belgium. There are not so many practice tracks around anymore. It’s good that we also have Liam Everts coming up now. Hopefully, we can get some more good results and some more attention from the Belgian media and the Belgian government.

I remember watching Stefan Everts and Marnicq Bervoets race against each other at places like Foxhill and Valkenswaard. How do you like working with Marnicq?
Yeah, we get along very good and of course he has a lot of experience so he can help me on track and off track and it’s a really nice advantage and he’s actually a very good friend of mine.

I think it’s awesome that your dad Herman was once Bervoets’ mechanic. Does your dad attend all of your races?
Yes, he comes out to all the races with me.

Does he like it?
Yeah, for sure he likes it. Motocross is his life it’s nice that he, Marnicq, and me are all together. We can laugh and have a good time with each other.

Do you know what you’ll be doing in 2021 yet?
Yes. It will be announced very soon. I’m really happy about it. I think it’s a good step in the right direction.