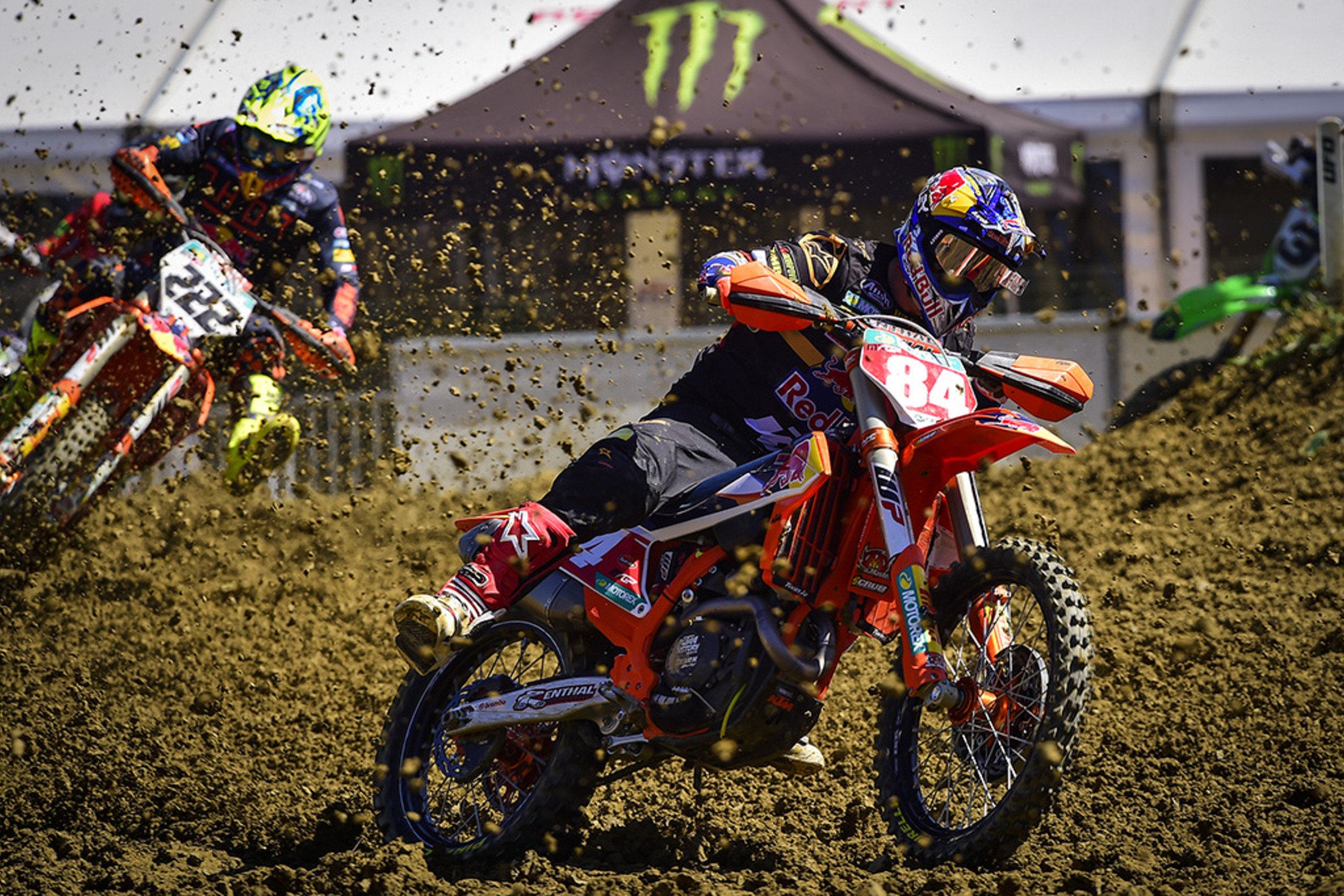 GP Report 5 Takeaways From The MXGP of Italy

The FIM Motocross World Championship Grand Prix reformed in Italy for the first of a three-race run in a short time in Faenza. GP scribe Adam Wheeler provides the key observations from the race.

The compact and confined Monte Coralli circuit in Faenza had been distant from MXGP since 2012. The Italian round of the FIM World Championship has bounced around three other venues in the last eight years but has avoided a return to the hilly hard-pack a short distance from the eastern Adriatic coastline. At full capacity MXGP would struggle to fit into the complex. However, in these delicate COVID-19-affected times, Faenza was a fitting and willing capsule for the sport and the second ‘triple header’ to stage rounds six, seven and eight in the space of seven days.

Full credit to Infront Motor Racing and the club for the track preparation that produced soft terrain where possible (minimizing the blue-groove), hefty ruts and a degree of line choice. They were precise with watering as dust was kept to a minimum without soaking the surface to a slick and perilous extent. Watering has been one of the criticisms of MXGP track prep in recent years, particularly by the MX2 class riders who tackle the first moto of the day and also after the brief afternoon break, but their work was noteworthy on this occasion. For a winding track that adhered to FIM regulations of 1690m it also produced a near-two minute lap-time. It was endlessly curving but had at least three or four sections where the 450s could open up.

All four motos followed a similar pattern: the riders spent the first half of the distance pacing themselves and trying to avoid mistakes (HRC’s Tim Gajser, Monster Energy Yamaha’s Gautier Paulin and Arnaud Tonus, Monster Energy Kawasaki’s Romain Febvre, Red Bull KTM’s Jorge Prado were all fallers at some stage) before turning up the heat in the second phase of the races. Lap-times were similar and starts determined the front-runners. “The speed of the top ten is unbelievably fast,” said winner Jeffrey Herlings; the Red Bull KTM man earning his fourth overall from the six so far. “Everybody is so close to each other and the starts really were key. It doesn’t matter who you are, if you don’t make the starts then it’s very tough to come back.”

One disadvantage to grouping Grands Prix close together is the tangible feeling that an injury or setback at the first of three events would prove extra costly for the quick-following second and third instalments. The MXGP paddock hope to have as many races as possible while dealing with the pandemic this summer and autumn but ironically the frequency presents a very different playing field of endurance for the championship picture. Get just one round wrong and a lot of ground is quickly lost. Bike problems, physical problems or off-key races have already cast the likes of Gajser, GasGas’ Glenn Coldenhoff and Rockstar Energy Husqvarna’s Arminas Jasikonis distant from the 2020 title pursuit.

Back in 2012 a tearful 17-year old Herlings toasted his first MX2 world championship and his 15th Grand Prix triumph at Faenza. The same day Tony Cairoli walked the top of the premier class podium. Accelerate eight years on and Herlings dealt with fast-starting but raw teammate Jorge Prado and a robust and spectacular Monster Energy Yamaha’s Jeremy Seewer to post the first 1-1 of the season and reach a career total of 90 victories. Cairoli was 3rd overall despite fearing for his weak right knee that saw him three-four seconds away from the pace in Free Practice.

Herlings’ claims about the competitiveness of the top ten of MXGP are valid: the sheer amount of podium experience testifies to the fact. But the Dutchman was impressively measured and finally imperious in his stalking of Prado and defiance of Seewer. Cairoli, Febvre and Gajser were also in close company. His milestone of 90 means he levels with Cairoli as the second-best Grand Prix rider of all time and has a further three years to reach Stefan Everts’ seemingly unscalable total of 101.

Cairoli’s 168th trophy since 2004 (and third of 2020) had the added benefit of lifting him above the forlorn Gajser in the championship standings. The Slovenian rued his starts and has yet to find the same sheen of invincibility that assisted him so finely on the older spec CRF450R in 2019. Cairoli is 60 points adrift of Herlings and was vocal in his dislike of Monte Coralli. “I’m happy with 3rd because this kind of track is not really one of my favorites,” he said. “I like to race in Italy of course but I like softer ground better. We have to do another two races here, so I hope to improve.”

Herlings’ nearest rival on Wednesday and again this coming Sunday could be an error-free Prado or a desperate Seewer. The Swiss is getting closer than ever to his first premier class success in his third term in the category. He was less than two seconds from the KTM rear wheel in the second moto. The slightest slip from Herlings would have allowed the Yamaha man to confirm that elusive celebration. “This was the third time I was just 1-2 seconds off a win,” he said. “Twice it would have been a GP win also, so I’m getting really close. Of course I want it. There are plenty more chances and even this week and these days. I will keep pushing.”

Seewer is a very rare breed. Not only has the 26-year old lined up for every Grand Prix since he moved out of the European Championship in 2015, but he has also improved his championship position every single season and has progressed continually since stepping onto a 450 in 2018. He obtained podium results in his second season in 2019 and was runner-up in the world and now he is regularly touching that maiden overall.

“It will be an exciting week,” offered Herlings.

SM Action M.C. Migliori’s Maxime Renaux is the latest in the set of France’s embarrassment of motocross riches to come to the fore. The 20 year old in his a second year into Grand Prix, the former 125 Junior World Champion has dealt with two lost seasons of injury but is now showing his mettle. Renaux was the name on most factory team’s radars in the middle of the decade as a talented teenager, and his close bond with Yamaha is bound to pay a dividend with a factory seat for 2021. In Faenza Renaux combined starts with sharp focus to disrupt the Vialle-Geerts MX2 dispute. He is the first rider outside of the Monster Energy Yamaha wielding Belgian and Red Bull KTM steering Frenchman to claim a Grand Prix in 2020.

Vialle tossed away the lead with a front-end slide in the first moto and Geerts gladly accepted the 25 points ahead of Renaux. Geerts will be looking for maximum haul on the Italian hard-pack that remains on the ‘20 calendar (Arco di Trento in November will be slick and stony) while knowing his sand acumen for the ‘triples’ in Mantova and Lommel will carry an advantage. Vialle responded to his mistake by hounding Renaux all the way to the flag in the second moto with just 0.3 of a second the difference.

Vialle and Geerts are split by 3 points in the title chase and have been greedy with 11 moto wins between them until Renaux was the first to crash the party. Already appearing on the MX2 podium twice until now, the Faenza result could see the full flowering of the Frenchman as a GP force. He’ll join Vialle and Mathys Boisrame as the next Tricolore teen to make his presence felt on the results sheets.

MXGP maintained their tight protocol for access to the Grand Prix with the safety and social distancing guidelines once again in the paddock. Monte Coralli featured EMX125 and EMX2T competitors so there was already a bigger attendance compared to Latvia in August when the FIM World Championship awoke under the cloak of COVID-19.

The necessity for testing 72 hours before the Grand Prix and then 24 hours within arrival in Italy or at the circuit was the same as for Kegums, but the process with the independent clinic on-site enlisted for the purpose was haphazard. Results were turned around far slower than those provided by stations in Latvia, and the case of Marchetti Racing Team KTM’s Brian Bogers illustrated the knock-on effect of an errant PCR testing. According to the team, the former Motocross of Nations podiumee and HRC rider was informed that his Coronavirus test had turned up positive on the morning of race day. According to their protocol Infront Motor Racing had to issue a statement saying the Dutchman was unfit to race. The team – with no other confirmed cases in their roster and with Bogers’ partner and family all classifying negative – wanted a second test and the initial sample re-examined. Bogers was forced to sit out the first MXGP moto, erroneously it turns out, as he was finally allowed to the line in last position for the second race when his initial test was found to be incorrectly verified.

Marchetti were justifiably frustrated. The affair highlighted the folly of the system without a more efficient turnaround period. 12-24 hours is simply too long for a one-day race event (even if Marchetti were at least able to save half of the Grand Prix). No disrespect to Bogers but if a similar incident occurs with a championship contender then MXGP will face a more difficult situation. As with many elements of daily life in the shadow of the pandemic the ‘Plan B’ is not always so clear or so easy.

Thomas Covington’s starts were x-rated in Italy. The #64 was among the last bikes around the opening turns in both motos and the handicap meant the Yamaha man and MXGP rookie was again frustrated in his search for points. “I’m usually a good starter but we struggled today. We are trying some different things with the clutch and trying to get comfortable coming out of the gate with all the power I’ve got, so we’ll change a few things for the next round,” the 24-year old said.

“The difference of where I am [running] and the top fifteen is not that big,” he added. “If I can start better then I can run that pace. Starting from last is so much harder to catch back up. I’m making progress…but slowly!”

Covington and Gebben Yamaha teammate Calvin Vlaanderen are rookies in the premier class for 2020. Vlaanderen, the Dutchman/South African, has fought his way into the top twenty but Covington has had to learn and recover from his illness at the same time. “It has been tougher than I expected,” he admitted to life in MXGP. “There have been a lot of new things: bike, team, 450. It has been a lot to take-on in a short amount of time but I just have to stay committed. I feel I am 100% healthy now and I’m training like I used to. I’m not lacking in that respect. It is now more about speed and getting comfortable. I have to focus on making progress.”