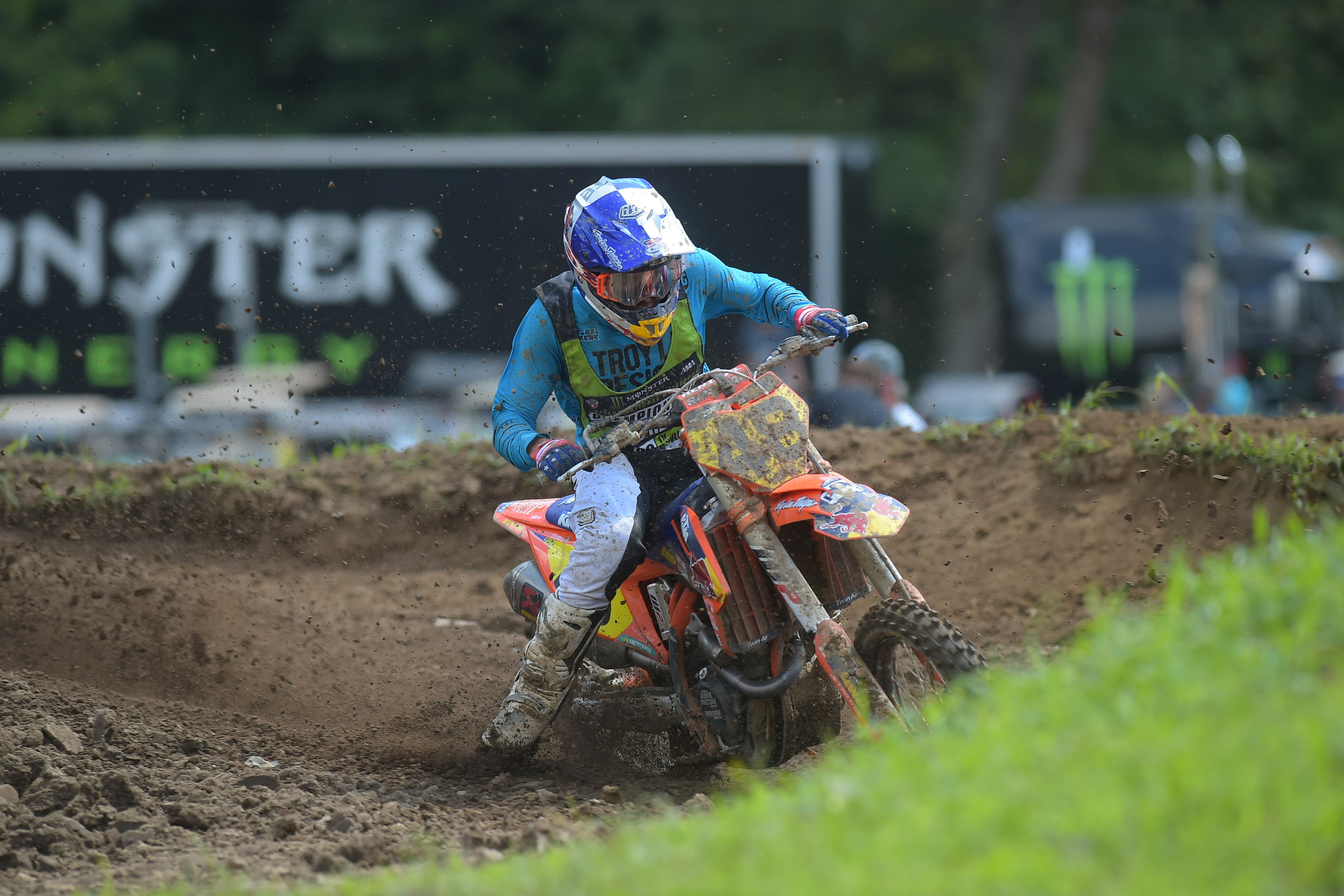 Things We Learned at the Ranch Thursday

With the 2020 Monster Energy AMA Amateur National Motocross Championship at Loretta Lynn's underway, we’re going to provide you a written recap highlight the best action from each day’s motos. Here’s what we learned on Thursday's racing at the Ranch.

Shakeup, Breakup in B

The 250 B class is the most stacked of the week, and the intensity and pressure led to chaos in the second moto. But, what a race. Wow. Monster Energy Kawasaki Team Green’s Jett Reynolds took a distant third in moto one, but later had a breakthrough moto win in Schoolboy 2. Riding on that confidence, he was out front early in 250 B moto two, with first-moto winner Matt LeBlanc behind him. Reynolds, pushing the pace, starting making mistakes, and LeBlanc got to him, made the pass and began to pull away. Then Reynolds came back! He retook the lead and kept pushing, until it finally caught up with him in the Ten Commandments. Reynolds endoed trying to triple and flipped hard into the dirt. His race was done after that hard crash, but he was lucky to escape without any broken bones.

This left LeBlanc in the lead again on his Monster Energy/Star Racing Yamaha, but out of nowhere, Troy Lee Designs/Red Bull KTM’s Nate Thrasher was on a charge. Thrasher had bad gate picks in his first motos this week and didn’t get a chance to show his speed at the front, but this time he was on a rail and caught and passed LeBlanc to take the lead and the win.

“I had bad gates picks so I just had to come through in the first motos,” said Thrasher, who also missed Loretta’s last year with injury and is reestablishing himself now. “I know I train with the best trainer in the world and ride with the best riders in the world [at Baker’s Factory]. I do 30+ twos so I know I have the endurance.”

Thrasher and Nick Romano had a crash on the last lap of the first moto which pretty much ruins their championship hopes, and Reynolds is out of contention in this one now, also. So LeBlanc is playing it smart. He played it cool behind Reynolds, and when Thrasher caught him, he let him go.

“I saw him [Jett Reynolds] making a lot of mistakes, kinda riding over his head so I just checked up a little bit,” said LeBlanc. “After I saw him go down, I just kinda backed it down a bit, I know I have a big points lead.”

Levi Kitchen has done it yet again. In his second 450 B Limited class on Thursday, Kitchen finished 39.257 seconds ahead of second-place finisher Luke Kalaitzian (Honda). Kitchen has really been one of the most fun riders to watch this week as he’s been on an absolute tare in each and every moto. But, aside from the first 250 B Limited moto of the week, Kitchen has gotten a good start and hasn’t been contested much. Just for fun, let's take a look at his winnings again: his 140 second gap to second in his four moto wins means his average win is by 35 seconds. Well done, chef Levi.

In contrast to riders like Leblanc, Thrasher, Reynolds, Romano, and Chance Hymas banging off of each other to win in 250 B, some other big names are having their way in other divisions. Ryder Difrancesco has won all three of his Supermini motos, Max Vohland has won all of four his motos in 125cc (12-17) B/C and Schoolboy 1 (12-17) B/C, Haiden Deegan has won all four of his Mini Sr motos on the 85cc bike, and Kitchen has won all four of his motos in 250 B Limited and 450 B Limited. We’re looking forward to the day these boys end up in the B and A class log jam on big bikes like this year’s stacked B group is doing. For now, they’re racking up the gold medals, confidence and reputation out front.

The three-moto format at Loretta’s is designed to throw riders a variety of starts, track conditions and situations, however Stilez Robertson had to deal with a really strange level of adversity even based on those usual standards. On the start, it appeared the two-card flipped early, and a starting official was still standing on the line in front of Robertson just seconds before the gate was dropping. At the last second, Robertson, who won the first moto, jammed his bike into gear and tried to rev and dump the clutch, but he was buried off the start. Somehow, he snaked through the first few corners and made passes, and emerged sixth by the end of the first lap.

Up front, Mason Gonzalez grabbed his usual good start and another Stacyc Holeshot Award. Robertson put in a huge charge from second to catch Gonzales, but ran out of time before he could threaten a pass. This puts Gonzales and Robertson tied with 1-2 and 2-1 scores going into the final moto of the coveted Open Pro Sport class.

KTM and Husqvarna launched their new electric bikes into the mainstream when the gate dropped—silently—on the first ever Mini E (4-6) motos at Loretta’s. The electric minis bikes were new but the riders were familiar, because Jaydin Smart and Kade Nightingale, who also battled for moto wins on Cobra 50s, battled for the moto wins on the electrics, too. On Wednesday, Nightingale went into the history books as the first-ever moto winner on an electric bike at Loretta’s, and then backed it up with the win on Thursday in another hard-fought battle with Smart. Then, at the end of the day, they were back battling on Cobra two-stroke 50s, but Smart got the edge. Gas or electric, Nightingale and Smart keep on battling, and winning. As for the sport, the electric thing is going to take some getting used to. You can literally hear the parents cheering the names of the kids as the race is going on! But, the bikes proved they are capable. Smart and Nightingale both said they run faster lap times on their two-stroke 50s, but the electrics proved they’re capable. Plus, the lack of intimidation, maintenance, and easy adjustability mean the electric bikes are especially well suited to newer riders. Hard Loretta’s motos with the fastest six-year-olds in the nation push these bikes to the limits, but there’s now a place in the sport for battery-powered machines, and young talent like this will probably be the ones to bring them further through the ranks.