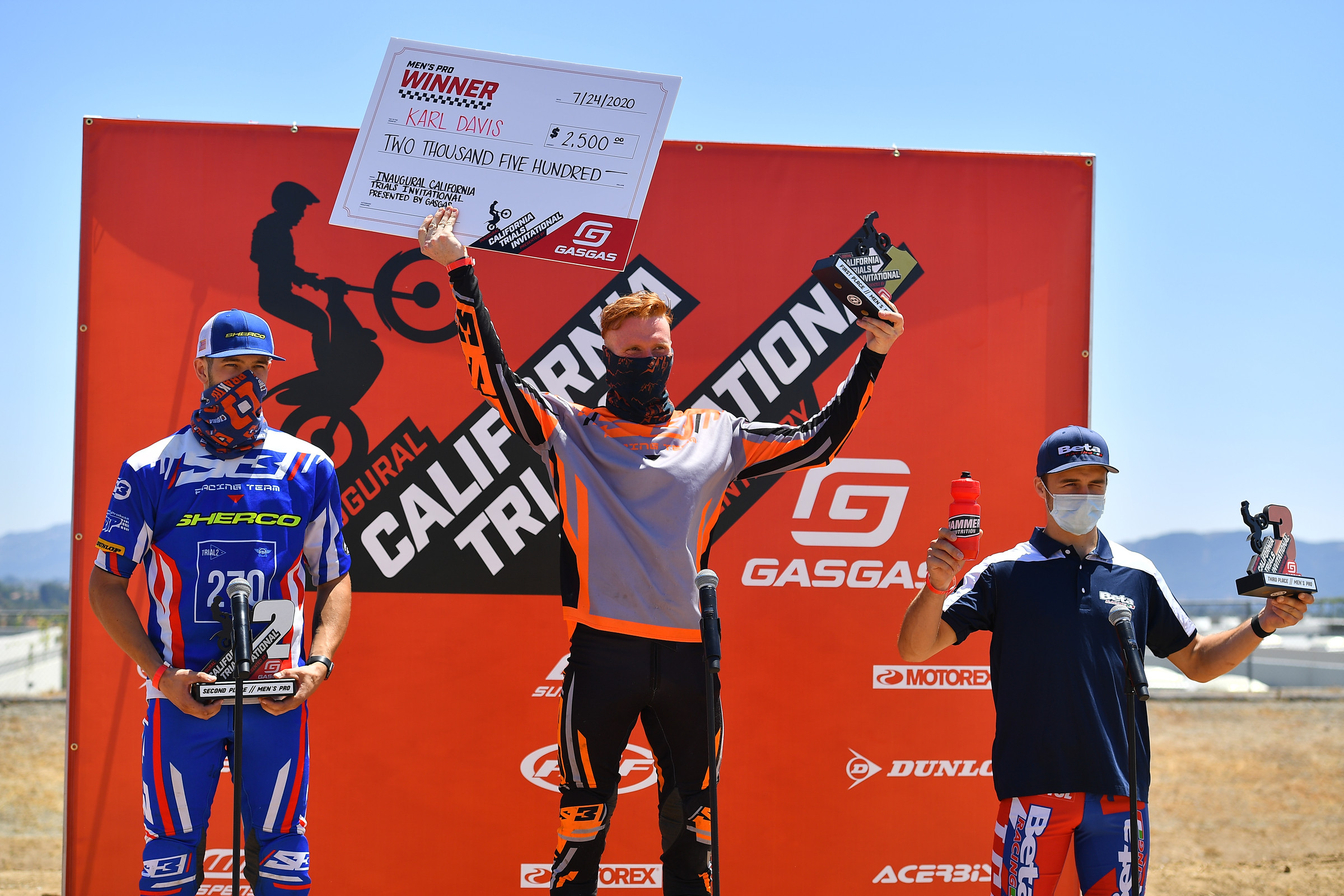 Of all the competition impacted by COVID-19 this year, you might be surprised to hear that trials has perhaps felt it the most. The entire 2020 NATC Championship is now cancelled. Meanwhile, popular trials brand Gas Gas has a new owner in KTM, and the brand was hoping to push the sport. Without any events to push, the KTM group decided to do host its own event, building a trials course in the back of its RD Field supercross test track and inviting the top men’s and women’s riders in America, regardless of bike brand, to do battle.

The men’s winner was Karl Davis Jr. What’s trials like? We asked him.

Racer X: We have our winner here. Coming in, was the goal to win, or is did you just want to be part of this and just see what it’s like?
Karl Davis Jr.: Definitely wanted to win. Actually, since it’s the only event of the year, I was almost hyper-focused and super nervous. Like, this is it. This is our one event that we have, or that’s scheduled right now. I wanted to win this. I wanted to do well. I played it smart at the beginning of the day. I didn’t want to qualify first. I didn’t want to qualify last. I wanted right in the middle of the pack, just to watch riders ride because the sections are going to get so chewed out in the first lap, which I think is what made my first lap so good. I had a really awesome first lap, and once I had that gap I just played smart. I wanted to keep a gap between me and Alex [Meyers]. He was riding really well. I tried to keep at least five points between us and just play smart. I was thinking about every move and what I needed to do just to stay ahead and keep that march going.

At an event like this, when you have a bit of a crowd around, does it add more pressure? Do you feel that?
This event was a little strange. Usually the crowd is not too big of a deal. I got to work on the Marvel Universe Live stunt show and perform in front of thousands of people every night, so having eyes on me is not hard. But I think just the effort behind this kind of adds pressure. Just how the event was done. It was done so well and there was so much promotion behind it. It’s for a sport that I really care about. This is big for trials. I want to do really well. So that’s where I think the pressure came from for me. It was awesome.

Took the W yesterday the the first ever California Trials Invitational! It was hard fought, had @alex_niederer21 keeping me honest all day and then @joshroper4 came in with an insane last lap to really put the pressure on. A huge thanks @geoffaaron @gasgasusa and to everyone involved in making this event happen and make it flow so easily. Looking forward to the next one! @factoryonemototrials @shercousa_official @s3parts.official @ryp_usa @motulusa @ridedunlop

As far as your riding and your prep coming into this, are you on the Marvel tour even now, or have you been back as a trials competitor lately?
We were on a world tour and then when the COVID hit, that all got shut down. We were supposed to go to Australia and Asia for the end of the year. So a few months ago I kind of hit the road and I’ve just been kind of promoting trials and riding and my schools, doing local clubs and events. Kind of traveling around the States. I’ve been in the Northwest for a while. I’m just riding local trials, trying to keep the sport going and keep people interested and trying to promote my own riding schools that I’m doing. All I want to do is just ride trials!

So if Marvel Live had been going, you wouldn’t have been able to do this?
Yeah. I would not have been able to do this. Unfortunately, we had to shut down all live entertainment. But I’m really excited to be back in trials. Now that I’m back into it 100 percent it’s reignited the spirit in me. I love it. I’ve always loved it. I have a few more years left of this and I want to do it and I want to do it right and just enjoy it. I think as a kid growing up riding, you don’t appreciate it as much, but now that I’ve taken a step back, and I’m back into it, I can really, truly enjoy every moment of it. I’ve been extremely happy.

This went on for a while. Fatigue is a factor. Talk about the training and prep that you have to do. Is it just riding, or do you do other things?
Yeah, definitely with how long and tough the sections are, you’re pushing. It’s a minute and a half full-on sprint. But as far as cross-training goes, I do a lot of cycling, a lot of mountain biking. I add cross fit into my regiment just to keep weights. You’ve got to be explosive. I think being explosive with weights and functional movements really helps with trials.

I’d say more so than most other motorcycle racing, the explosiveness.
Yeah. Those explosive lifts, those cleans, and jerks, and snatches, they got a long way in trials, I think. I feel a lot better when I’m doing those religiously off the bike.

What’s it mean for the sport of trials to get media out here and have an event like this? It has to be like, “Yes, finally!”
Yes. That’s exactly how I feel. That’s why I’m so happy to be a part of this. It’s like, finally, something I put my whole life into is getting a little bit of recognition and hopefully it keeps growing and building. Hopefully these kind of events bring international riders over here where the talent is really high and helps us raise our level and get the next generation of our riders up there. It would be sweet to see American world championships and to have more events like this in the States where we have international presentation and just push the sport of trials in America.

What kind of gypsy life do you run? Are you living out of a van when you do these schools?
Yeah. [Laughs] I’m pretty much living the gypsy life, out of the van. I’m living van life right now with my girlfriend. We’ve loving it. It’s nice and easy. Not a high income in trials, but we’re making it work and having a great time just riding.