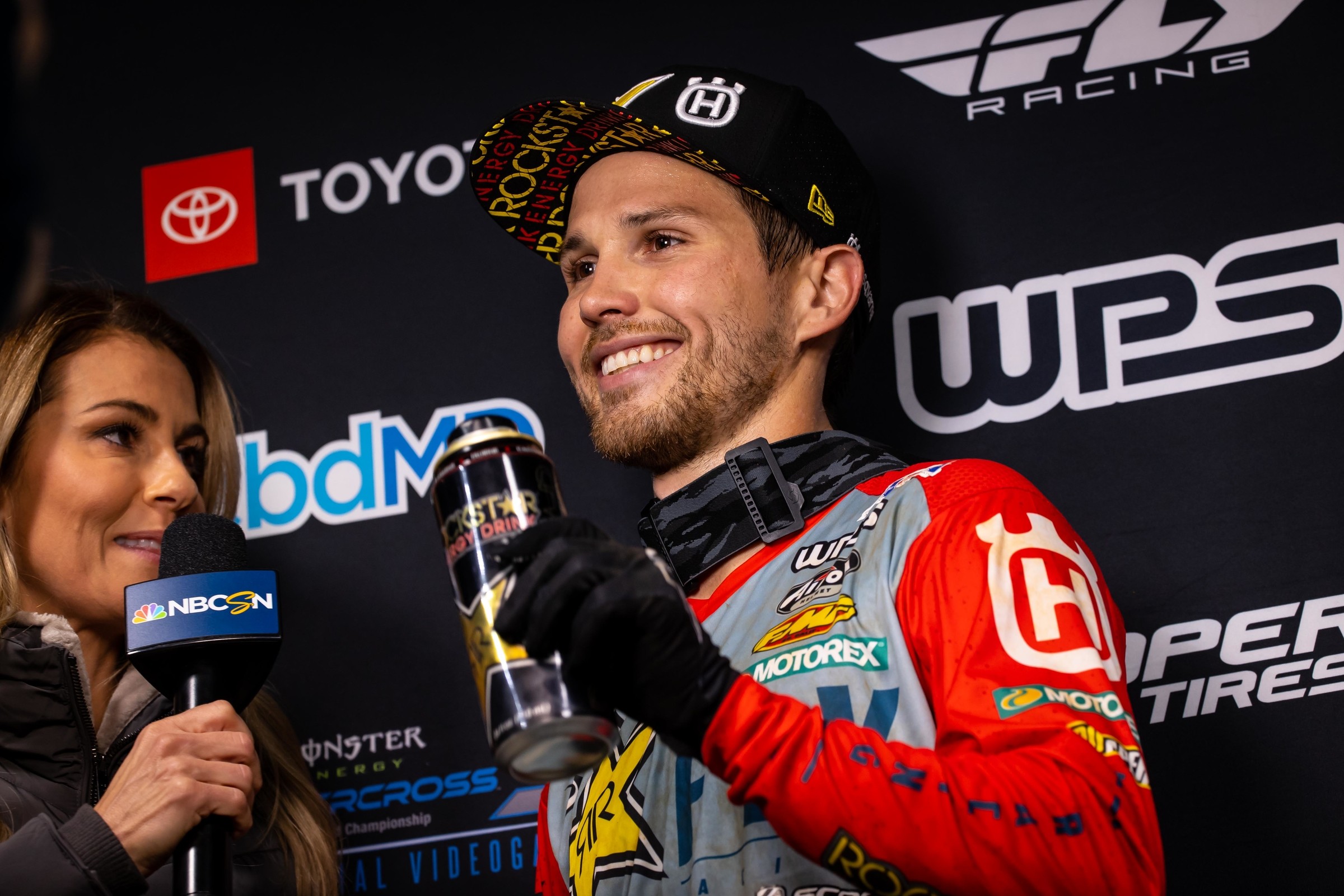 Nobody was happy when normal racing operations came to a screeching, awkward, and expensive halt, but for some it wasn’t without a silver lining. For RJ Hampshire, who’d been dealing with a burdensome knee injury, the unscheduled break was an opportunity to get his knee fixed without missing any supercross races. After all, at that point it was thought supercross would resume in the fall, but after going under the knife, Hampshire learned the season would indeed be resurrected in Salt Lake City much sooner than expected. That spelled the end of Hampshire’s 2020 supercross run, something the Rockstar Energy Husqvarna Factory Racing rider wasn’t exactly thrilled about, to say the least. Fortunately Hampshire has been able to recover remarkably fast and will officially be ready for the start of the Lucas Oil AMA Pro Motocross Championship in July. We spoke with him to learn more about how he was able to bounce back so quickly.

Racer X: First things first. How’s the knee coming along?
RJ Hampshire: The knee is solid. I believe tomorrow is 13 weeks from surgery and I started riding three weeks ago. Today is my third week. It’s kind of unreal, just the mental side of things. I was like, “Look, I’ve got to be ready.” At first we thought we were going racing on the Fourth of July, and that’s what I was set on. I was pretty beat up and hurt from missing supercross, I literally had surgery to be ready for supercross. To miss that, man, I was butt hurt pretty bad, so I wasn’t going to miss any more of my races. We hired a guy pretty much full-time back here in Florida to take care of my therapy and after ten weeks I was back on the bike. Honestly I feel pretty much back to normal now.

It seems like you riders almost have superhuman healing powers. I don’t know how you do this. Is it just me or is ACL healing time is getting shorter and shorter these days?
Man, I was so worried. Everyone was telling me like five or six months and I’m like, “Dude, look. That’s not possible for me.” Literally the day after surgery they told me to get that motion back. I got home and went straight into therapy, and by week three I started running. It wasn’t pretty, but I had to do what I had to do. Each time it got better and better too. It probably wasn’t the greatest idea to do that, but it was in my head that I had to be ready for July 4, and I had to do whatever I could. Yeah, some things I probably shouldn’t have done, but my body never really told me no. So I just kept at it and now, 13 weeks down, I’m motoing. I pounded out 30s today.

That’s really incredible. People really don’t understand how crazy that is, I don’t think. Did you have a cadaver ligament put in?
Mine was my patella. They go in and cut the patella. The surgery is no joke, and to be where I’m at is kind of unreal.

I had my ACL repaired about ten years ago and I literally wasn’t even allowed to put weight on it for two weeks.
Yeah, you hear all these stories. Yeah, did all the right things to be back, but there’s a big mental side of it. I could mentally heal myself faster. If you tell yourself you’re going to do something your body is going to start to believe it. It sounds crazy, but I feel like that’s probably what happened.

On the therapy side, was their anything new or high-tech that you used to heal yourself quickly?
Nothing, I did it all naturally. I didn’t even use cryotherapy or a hyperbaric chamber. I did it all naturally. Ice and therapy, really. My guy crushed it, I can’t take credit for that. We were four days a week and in and out of the gym. Once I got my stability back we could start pushing weight, and my muscles came back pretty fast. I think that’s why I bounced back so fast. I never really let my muscles deteriorate, I never let them lose what they were used to. A lot of guys struggle getting back, your body can’t really adapt to what’s going. It all shuts down and you lose your quad, your hammy, all of that. I got back at it so early I didn’t lose as much. Of course you lose some of it, but dude, it’s unreal. My left is a little bit weaker than my right, but you can’t really tell. I’m hitting my left-handed corners the same as my right now.

You’ve got a baby now too, so it wasn’t like you were just coasting when you weren’t working.
I was home a lot more than I would have been had I been riding, so I got to spend so much time with her. Those ten weeks I was doing therapy a lot, but I was still home more, so it had its perks. But you wouldn’t even have wanted to talk to me when I found out I was going to miss supercross. It wasn’t pretty.

Speaking of that, of course you weren’t happy about missing supercross, but you have to be pumped to have a good knee coming into motocross. I spoke to you a couple months ago and you said the knee was pretty gnarly.
I am excited for that. Those first four supercross races were painful, but I was set on making it through. I could have put up with it and when the outdoors came up, I could make that decision then. Right after supercross ended I rode my first day of outdoors and it was like, “Okay, outdoors is not going to happen for me.” Right away we made the decision to get the surgery done because supercross wasn’t supposed to be happening until later in the year. But I’m healthy now, and instead of ruining two seasons this injury will just ruin 2020.

And it didn’t even ruin all of 2020!
Man, I did a lot in the off-season, and put up with a lot of pain in the first four rounds. To have that put on you, to be put in that position to make that decision, I don’t ever want to be in that situation again. Realistically, with this team, I could have been out there battling for wins with the knee. The team did agree with me also, but I feel like I let them down for not finishing out the season. That’s exactly why I’ve been out there hammering it, and why I have some extra fire coming into the outdoors.

Yeah, and the way the championship played out between Shane McElrath and Chase Sexton, it could have been different with you out there.
You never know. Everyone got hurt, and it was pretty much Shane and Chase. Chase got those two red flags, that helped him out huge. You never know what would have happened if I was out there, but realistically, Chase never had a bad round so even if I won all of them I don’t think I would have won it. So I could look at it that way and realize it probably wouldn’t have happened, but it’s still going to be in the back of my mind for a while. It’s a tough deal. I got my surgery to be ready for when they said supercross was going to come back, and it didn’t happen. I knew there was a risk of it, and now I think there’s a bigger plan. Who knows what will happen with outdoors or supercross next year? At the end of this it will all make sense.

How’s the prep for the nationals? Are you riding hard or just trying to get the feeling back?
Dude, I’m all out. My first week was a little bit rough, not really trusting my knee, and I didn’t really do any 30s, but last week we were hammering it, doing everything I could. The only issue is I haven’t really had any time to do any outdoor testing with this bike. As soon as I got on the bike we went straight into supercross testing, so until I just came back, I’d had maybe three days of outdoors on this bike. So now we’re making decisions as we go. This bike has a completely different feel for me, coming from what I was on before this. We figured it out for supercross, what I ended up on was unreal, and now we’re trying to get me comfortable enough to be battling for wins. I don’t think I’m off from where I need to be. I’m good to go, I’ve been pounding out 30s. The first couple might be a little bit rough. I’m not saying I can’t get it done, I just might have to suffer a little more than normal.

I don’t have any more questions, did we miss anything?
I don’t think so, I think we’re pretty solid. I haven’t really done any interviews or anything since the end of supercross. I haven’t even really said I was going to race outdoors. I don’t think anyone believed I could make it happen.

I definitely did not think you could. I’m not going to lie. When the team was saying you’d be back for the nationals I was like, maybe the second half.
That’s why I didn’t want to say it for sure. I didn’t want to hit my knee funny or something and end up being out longer. I didn’t want that on my shoulders, but I’m confident now my knee is good to go. I’ve dabbed it 50 times, probably 30 times just today. I feel normal on the bike and I feel like my speed is already back up there. Now it’s just time to get used to the heat again.