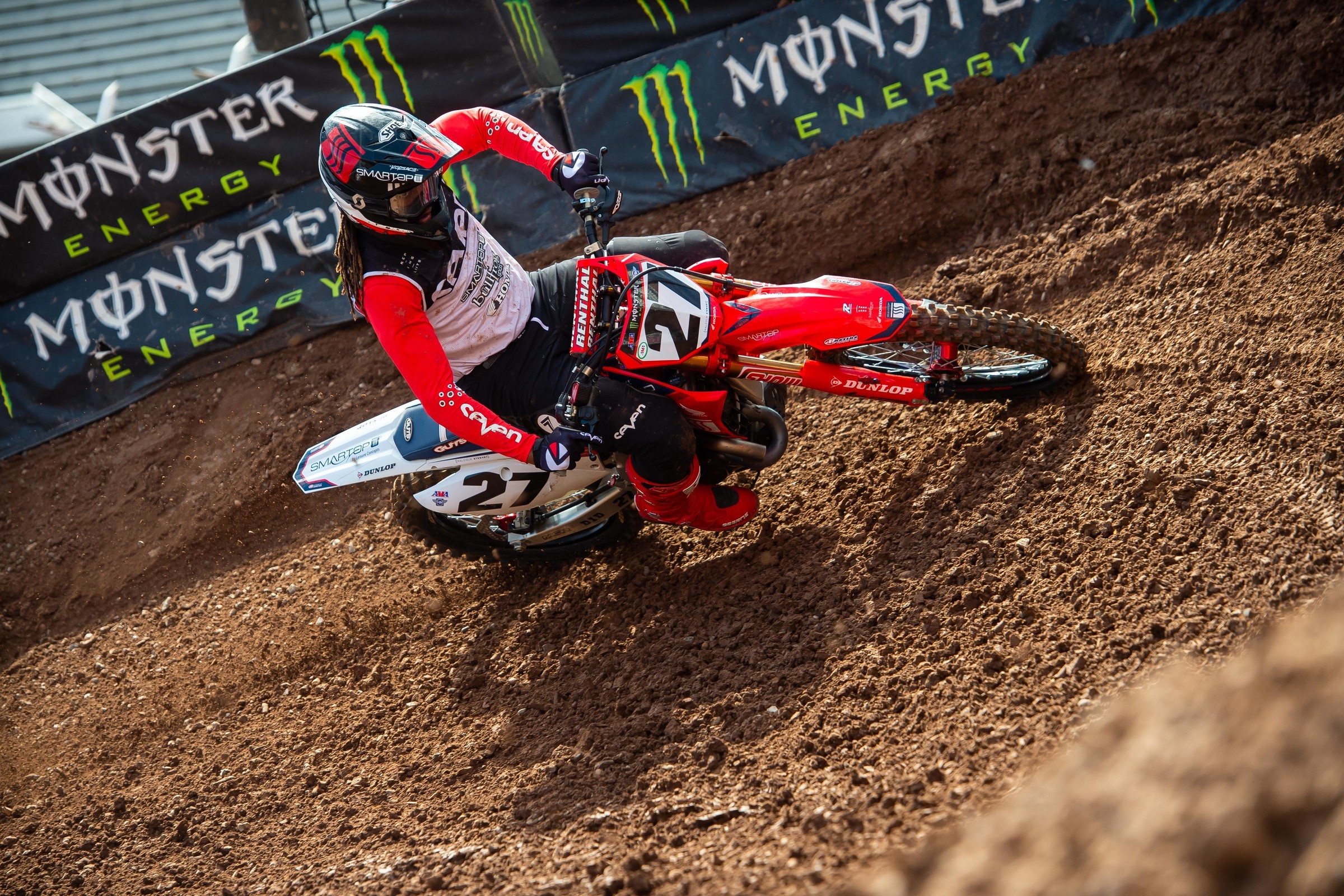 450 Words Under and Over the Radar

Ahead of him were factory riders with big salaries, championship goals, and outsized expectations: Osborne, Eli Tomac, Cooper Webb, Ken Roczen, Jason Anderson, and Justin Barcia. Behind him? A lot of big names and talent. It's a remarkable climb for Stewart, who has managed to be both over and under analyzed throughout his career. Hey, everyone knows Malcolm. Because he’s James Stewart’s brother, he had built-in fame. Hey, everybody loves Malcolm. His riding style is so spectacular and explosive—oh, those runs through the whoops!—Mookie Fever became a real thing. Plus, he’s a loveable, likeble, out-going guy.

But this is the rare situation in racing, which is still a results-based business, where a rider is known more for who he is than for where he actually finishes. People love Malcolm. Can they rattle off his stats? Do they notice where he finishes?

Malcolm actually did round himself into championship-level material with the 2016 205SX East Region crown, but his potential still didn’t peak the interests of teams anyway. He’s had to battle for 450 rides while he found his own footing and confidence, with him discovering a better worth ethic at each step. It’s finally come together now. Last year, the SmarTop/Bullfrog Spas/MotoConcepts Honda team grabbed Malcolm, and Tony Alessi began honing this diamond in the rough. Fitness improved, confidence went up, and suddenly there was Mookie at the sharp end of the field—until he got hurt. But even then, speed was never really a question. This year he added the hardest part, the longevity. Next up? Hard to say. How elite can Malcolm be?

That’s the judgment no one has made with accuracy. Tomac and Roczen types were winning at all levels all the time. They’re easy picks. As a young rider, Malcolm Stewart was known more as just “James Stewart’s brother” than he was for his own results on the track. He was good, but not outstanding. It was only made worse since he practically advertised that he wasn’t as serious about racing as others. Once that reputation is out there, it’s hard to change it. Hard to believe someone as famous as James Stewart’s brother as an unknown commodity, but that’s the truth. Malcolm didn’t win piles of amateur races, and he didn’t explode onto the pro scene. But Malcolm, back then, didn’t have the desire that he has now.  The new Malcolm has put in the work, is seeing the results, and growing in confidence. The new Malcolm is about to have different standards. How far can he go? Can he get 450 podiums? Wins? Can he fight for a championship? It’s flipping quite quickly.

Right now, he’s reached the loneliest position in racing. He was just off the podium at the races and just outside the top five in points. For some, that would be a shame, but for Malcolm Stewart, it might be perfect. By the way, Malcolm and the SmarTop/Bullfrog Spas/MotoConcepts Honda team doesn’t race the Lucas Oil AMA Pro Motocross Championship, but that’s okay, because he’s already accomplished what he needed to do this season. The goal last year was to get a solid ride and team from the outset of the season—2019 was the first year Malcolm actually started the season on a 450 team—and show his speed. He did that. The goal this year, as he repeated over and over, was to complete all 17 races. He not only did that, he got stronger as the season went on, including his best 450SX career finish in the final race. He created a base while staying away from the pressure. If he can combine everything he’s learned in 2021, he will be even better, but it will ratchet up the expectations and pressure. For a long time, Malcolm has been on the radar for the fans, but under the radar in the results sheet. Now he’s on the verge of getting a lot more attention for his racing. How far can it go? No one quite knows, but it’s going to be fun to watch.