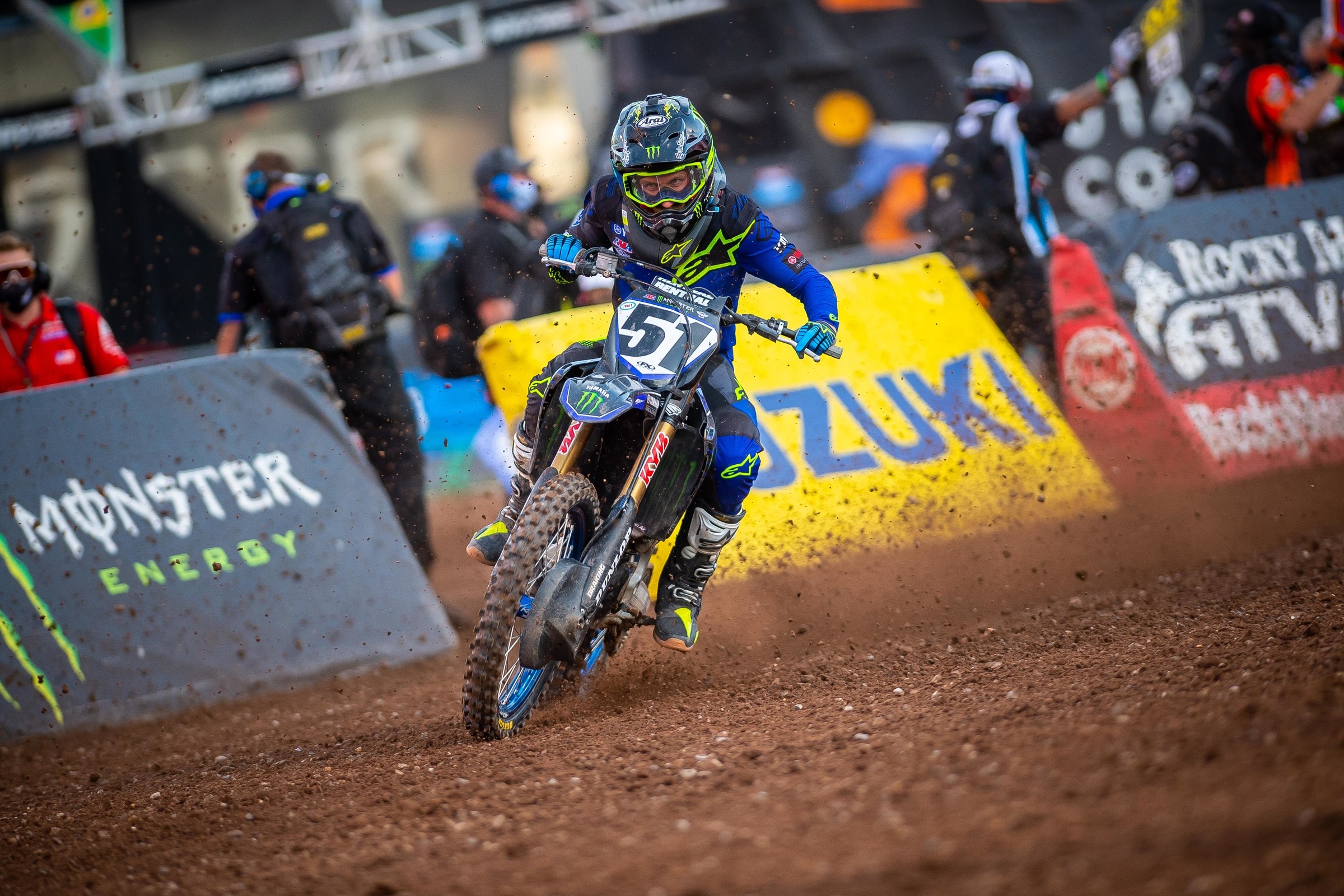 The championship math in the 450SX Class right now is pretty simple; if Eli Tomacwins the race on Wednesday night he becomes the 2020 Monster Energy AMA Supercross Champion. The Monster Energy Kawasaki rider holds a 24-point lead over Ken Roczen, and a 25-point lead over Cooper Webb, so the three-point boost he’d receive for a win would increase his lead to more than 26 points, the maximum number of earnable points per race, with just one race remaining. If he can avoid the problems on the start he’s had at the last two races, it just might be curtains at round 16. –Aaron Hansel

Ken Roczen is having a better supercross season than he’s had in a long time. In fact, with four wins so far the Honda HRC rider is just one win away from matching his season high of five set back in 2016. Unfortunately health issues like the shingles virus and asthma, especially at altitude, have resulted in a few very un-Roczen-like rides. He looked amazing on Sunday night though when he caught and passed Cooper Webb and took off to claim the checkers. Even Webb looked a little puzzled that Roczen didn’t fade halfway through the race, something he’s done the last several races prior. If Sunday's Roczen shows up on Wednesday, he could tie his win record from 2016 and set the stage for it to be broken at the finale. -Hansel

While these final rounds of 2020 have been rough for some riders, Malcolm Stewart has been very good since the series planted itself in Utah for the remainder of the season. The SmarTop/Bullfrog Spas/MotoConcepts Honda rider was fifth on Sunday, matching his previous season best, which also took place just two races prior. Yes, he DNF’d a week ago, but that was due to a broken footpeg. Stewart’s in the groove right now, and now that he’s got his first top five, could be potentially score his first career podium? –Hansel

The 250SX East Region returns this Wednesday, and as far as the title goes there are only two relevant riders—Chase Sexton and Shane McElrath. After winning the last race, Sexton sits three points up. That leaves McElrath in a near must-win situation. Sure, he’ll still have a chance at the championship even if he goes into the East/West Showdown six points down, but going in tied, or even a couple points up, is much more preferable. If McElrath is able to even the score tonight, the stage will be set for a seriously wild and intense finale. –Hansel

It isn’t every day a pair of rookies find themselves battling to finish the season in the top five, but that’s exactly want’s happening right now in the 250SX East Region with Jalek Swoll and Jo Shimoda; Swoll holds fifth by just two points over Shimoda. If you want to place bets on who will end up ahead based on results from Salt Lake City, you’d have to go with Swoll. The Rockstar Energy Husqvarna Factory Racing rider has gone 7-7-6 versus Shimoda’s 21-8-11. It’s worthy of mentioning the 21st from Shimoda was due to a mechanical problem. Either way, they’ll both probably make it into the top five since Jeremy Martin, who’s ahead of Swoll by 14 points, is out for the rest of the season to avoid pointing out of the 250SX class. If they really rally, they could catch the out-with-injury Garrett Marchbanks, who is third, 28 points ahead of Swoll. The real question is, which rider will take top rookie honors? -Hansel

No Dog In the Fight

With Tomac in position to clinch, how will that impact other riders on the track? Even Roczen’s teammate Justin Brayton doesn’t want to be known as a guy who tilted things one way or another. “It’s for sure on everyone’s mind, you don’t want to get in the middle of it and you want to let those guys just duke it out,” said Brayton. “To be quite honest, their pace has been so high since we’ve gotten here that, yeah, we’d all love to be in the mix but none of us really have been. If you’re in the middle of it, you kinda’ want to let them fight it out. We’ve all got our goals and aspirations, maybe it’s top ten or top five or whatever it is. You want to fight for it, but if you’re not on their pace, I don’t think any of us would just fully fight for it and get into a block passing match with the guys that are fighting for the title.” –Jason Weigandt

Benny on the Jets

Benny Bloss at the top of the qualifying board? Benny Bloss winning a 450SX heat race? What is going on here? Don’t ask Benny himself. “Man, I don’t know!” he said. “I just feel really comfortable on the bike.” Benny’s 13th in Wednesday’s 450 main doesn’t seem impressive, as he has actually been 13th in four of the five races in Salt Lake City. However, his main was ruined by a pileup that left his bike damaged (as Benny says, he went to pass Vince Friese and Friese went straight into him). If Benny stays up the whole way, how far forward can he go in the main? –Weigandt

Out of the Element

Let’s be honest. The Salt Lake City run has not been great for Monster Energy Yamaha men Justin Barcia and Aaron Plessinger. Barcia was close to Cooper Webb in points coming into the rounds but is now 63 points out of that spot. “We’re trying everything,” said Plessinger. “I’ve changed my bike setup three or four times since we’ve been here. I think right now the Yamaha just works better when there are ruts and there’s traction, and right now we’re in the worst setting for us right now, this is hard and slippery. We’re just trying to learn and figure out what the bike wants. Trying to get up there!” Time is running out on a Yamaha breakthrough. Can one of the teammates finally at least hit the top five? –Weigandt

Between all the Salt Lake City track builds, the previous race and this one for tonight are the most similar. More than half of this track will be the same as Sunday night. How might that impact the action? Riders already know what the first turn offers. They know the start. They know the whoops. They know the hard, slippery dirt will make it hard to wick it up and make up time. But subtle changes in angles and dirt can make a similar track seem much different. They know a lot about Salt Lake City by now. Can they learn more? –Weigandt

Salt Lake City momentum ground to a halt for Martin Davalos and Jason Anderson on Sunday night. Davalos crashed a bunch, including while leading his heat race and again while up front in the main. Anderson got taken down on the first lap and was then caught in a huge pileup later. Both of these guys are going fast but didn’t have results to show for it at the last race. They have motivation to improve, as Anderson was up to fourth in points but dropped back to fifth, and then Davalos has admitted he doesn’t have a deal for next year yet but would love to keep on racing. Expect these dudes to be in the mix come Wednesday. –Weigandt