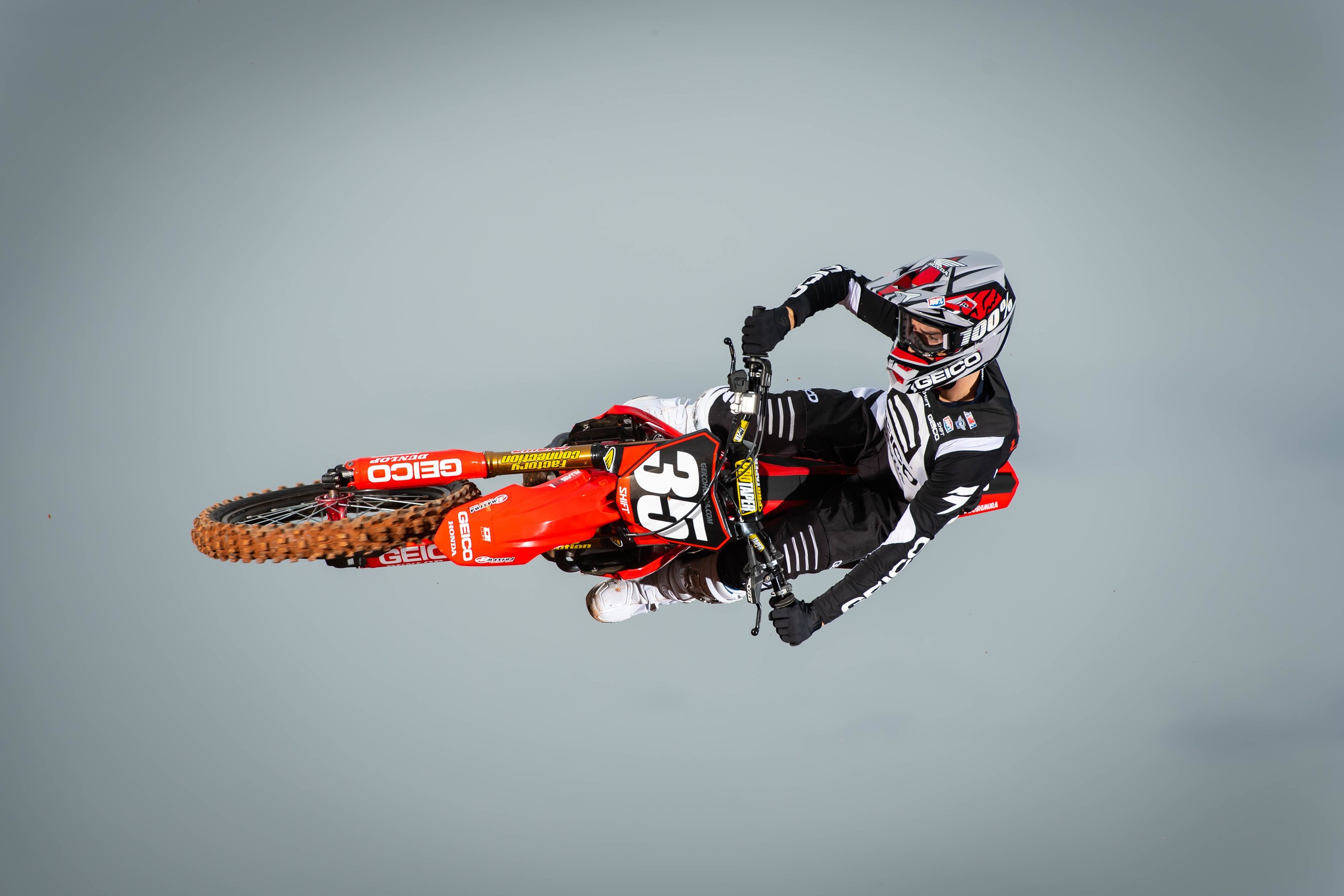 “It’s a feeling that gets old sometimes, but right now it’s never been sweeter,” says GEICO Honda’s Hunter Lawrence. Finally, finally, the Australian gets to make his debut in Monster Energy AMA Supercross, after missing last season—and what should have been this season—with injury. If the normal supercross schedule had held, Lawrence, coming off a shoulder injury, could have crammed in a few late rounds, but with the Lucas Oil AMA Pro Motocross Championship right around the corner, he most likely would have skipped those. Now with a full extra few months of riding and prep, there’s no reason to wait any longer.

Unfortunately, this might not last long. Hunter gets to race in the 250SX West Region this Wednesday and Sunday, but unless he gets into the top-20 in points, he won’t be eligible to race the East/West Showdown on June 21. So, his supercross foray could be done in less than a week. Top 20 will be tough, with Logan Karnow and Cameron Mcadoo tied for that spot with 27 points apiece leading into tonight’s race.

Meanwhile, 250SX East gets four guaranteed races. Why put Hunter in West? It came down to staffing requirements under social distancing. Teams are only allowed 10 workers in a group, and with three East riders already (Chase Sexton, Jeremy Martin, Jo Shimoda), there was no way GEICO Honda could cram in a mechanic for Hunter with the East group. In West, he’s part of a three-rider squad, with Christian Craig and….oh yeah, his (younger) brother, Jett.

“I was asked the other day: If Jett’s in the lead in the last turn and I have to pass him for the win, would you take him out? Absolutely! I would clean him out, and he would do the same to me!” said Hunter, sliding into the brotherly trash-talk that’s already become a trademark. “It will be cool. I’m not going there really focused on anyone, I’m just going for myself. I’m just trying to get race experience. There’s guys going for a title in this asterisk-marked 2020 season, but it’s not like I have anything like that to worry about. All I can do is try to score as many points as I can. Hey, if I don’t make it, no stress, I still get in two more races than I was going to get.

“I’m happy with how I feel, I’m training with Jett and stuff, and I can’t wait to go racing to see where I stack up,” he says. “We’re still basically training partners, and that’s really good because he’s obviously at a really high level right now in supercross. For the first time, even though he’s the younger brother, I can use him to my benefit. It’s been good to go through this sorta mini pre-season with him.”

The brother thing will be the headline with these boys for now—only their own path in a pro career will determine if they eventually break out and have their own, other rivals, and they become just two different riders on the track. For now, they’re linked.

It’s a little odd, though, to consider the younger Lawrence, still just 16, as the more experienced rider of the family, but he at least has three supercross starts under his belt. Hunter is coming in to learn. Missing all this supercross time, while already generating some strong outdoor results (wins during his Grand Prix days, and at Motocross of Nations, as well as two moto wins last year in the U.S.) might make it easy to brand Hunter as an “outdoor guy.” Is he out to prove something here?

“Dude, I don’t care,” says Lawrence. “I’m self-confident and secure that I’m a good supercross rider. It’s just unfortunate. Jett’s probably crashed more times than I have riding supercross, it just so happens that in those times when I did crash, I got injured. I’ve only crashed four times in two years of supercross training, but I was hurt three times in those crashes. Just a bit unfortunate really. I don’t know.”

To take some silver lining out of this long road, Hunter tries to see his entire journey as character building. If you talk to Hunter, you get the sense that he’s wise beyond his years. He can soak up info, he can stay humble, he can learn from those that came before him.

“Yeah, my dad and I have called it the ‘Lawrence way,’ and it’s just the hard way,” he says. “It’s been a struggle, for sure, getting here, but hopefully we might  have more success in the future. You learn to take nothing for granted. If a track isn’t watered heaps, or whatever, I always look back and say ‘Well, it’s better than some of the tracks I rode in Europe!’ I’m talking the South of France, or the middle of nowhere, where the track hasn’t been prepped for, I don’t know, three years? Dude, there’s beyond stories and stories of those times, so we’re pumped to be in America and just embracing it.”

Specifically, the Lawrence’s are following the American blueprint, with homes in Florida, but places to stay in California, either with trainer Johnny O’Mara or agent Lucas Mirtl. The steady hand of Johnny O’Mara is a huge help for the boys, but they still have fun with it.

“No, no! We give the old boy some sauce now on the mountain bike,” says Lawrence. “We’re able to push his buttons quite a bit on the bikes. I’m kidding. Jonny has so much focus, there’s never ego or grudge matches on the bicycle, he’s extremely professional.”

Hunter has his own Florida place 10 minutes from the rest of the family, including Jett. So, the brothers no longer live together.

“No, mate! I’d kill him by now!” he says, the trash talk coming back. “Everyone thought that, but we live in separate houses finally, and thank goodness because I couldn’t deal with that TikTok and all that garbage going on all day!”

Now, the Lawrence brothers are back together, staying at an Airbnb in Utah. They will take to the same track, checking off the next significant step in their racing journey. For Hunter, much of it starts tonight, but this race is really just another mile post on the long road to get here in the first place.