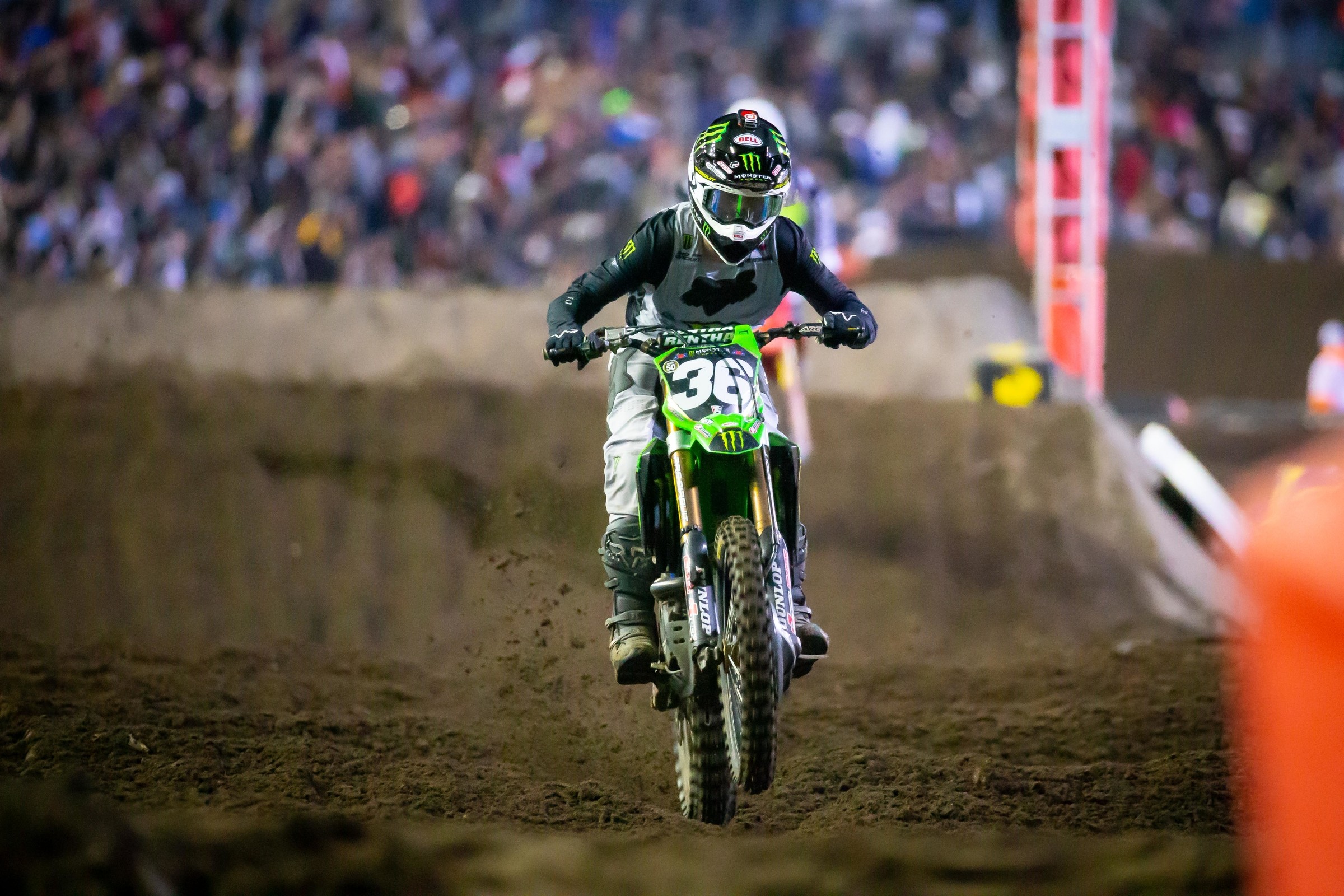 Don’t remember where we were in 250SX East action after racing stalled out following Daytona? Don’t worry, we’ve got you covered. Chase Sexton, who’s won two of four races, leads the championship by ten points over Shane McElrath, who won the East Region opener. RJ Hampshire is currently third in points, but won’t be racing due to a recent surgery to repair knee damage. Garrett Marchbanks holds fourth, and had a breakout ride when he won convincingly in Daytona. He’s 19 points out of the lead. There are five 250SX East rounds remaining, which is plenty of time for the guys to make moves on Sexton, but it won’t be easy—the GEICO Honda rider looked incredible in the first half of the season. Spicing things up is the return of McElrath’s teammate, Colt Nichols, who hasn’t raced this year due to a shoulder injury. For more on Nichols, read our interview with him from earlier this week. Check back to RacerXOnline.com soon for a full refresher on the 250SX East Region. –Aaron Hansel

Things couldn’t have been much tighter up front in the 450SX Class when the season temporarily stopped. Following Atlanta, both Eli Tomac and Ken Roczen were tied for the lead. Tomac won the following week in Daytona, and as a result sits just three points ahead of Roczen. Tomac has five wins, Roczen has three, Cooper Webb has one, and Justin Barcia has won. Webb and Barcia sit third and fourth, but they’re facing a 29 and 31-point deficits, respectively. It’s anyone’s guess what will happen between Tomac and Roczen, but Webb and Barcia are going to need some help if they want a shot at the title. In fact, even if either of them won every single remaining race it still wouldn’t be enough guarantee the championship. But, you never know what might happen when the gate drops! –Hansel

Adam Cianciarulo hasn’t won a race yet this season, but he’s been close several times. The Monster Energy Kawasaki pilot battled hard for the win with Barcia at the season opener, has finished second twice, and has led 37 laps. He’s also been incredibly dominant during qualifying. A broken collarbone, suffered in Arlington, put his season on hold, but he’s back at it and ready to pick up where he left off. Will the rookie get his first 450SX win when the season resumes on Sunday? –Hansel

The temporary suspension of racing had a huge effect on everyone, but it came at a particularly unfortunate time for Garrett Marchbanks, who’d just scored his first professional win at Daytona. He did it in style too—taking the holeshot and leading every single lap. The Monster Energy/Pro Circuit Kawasaki rider wasn’t able to ride any momentum into the next round, however, because the next round never came. It’s happening this Sunday though, and for Marchbanks, who’s from nearby Coalville, Utah, it's the perfect opportunity to show his win in Daytona wasn’t just a fluke. –Hansel

There have been races in the past where attendance was pretty low, but we’re entering uncharted territory this weekend with no fans allowed in Rice-Eccles Stadium. Racing is always special, but what will it be like without the energy of the crowd? Will there still be electricity in the air? Will some riders have trouble summoning intensity without the added boost of screaming fans? What will the opening ceremonies be like? It’s going to be massively different without racing’s most important ingredient, but we won’t know just how different it'll be until this Sunday. -Hansel

Yeah, there may still be seven rounds of the championship left, but Eli Tomac and Ken Roczen has been all anyone wanted to talk about during the break. Their close fight at the last round in Daytona in which Tomac won by a mere seven-tenths of a second left everyone wanting more heading into the next week at Indianapolis. Of course, we never got that continuation but now they both come in fully fresh off the long break and ready to continue their championship fight. Whether another player like Cooper Webb can sneak back into the picture remains to be seen, but this Tomac/Roczen dynamic is shaping up to be one of the better title fights in supercross history. -Kellen Brauer

Like Hansel said above, the appearance of this race will be unlike anything we’ve seen before without any fans in the stands. But what will be really peculiar is how teams and riders deal with the tight protocols. We’ve heard there will be a few practices but none of them will be for qualifying purposes as everyone makes the night show. On top of that, teams are limited to very few personnel and cannot interact with other teams around them. Riders will have to go to the line themselves which will also look strange. How will they get their start devices engaged? Who will warm up their bike while they stretch? Little things like that could throw a rider out of focus from the normal routines and will be strange to see how they react to it all. -Brauer

Will Justin Hill be able to do his shadow boxing move prior to the start of the races? Go to the 0:26 mark in the video below if you don't remember those sweet moves.

It has been a looooong time off of racing for these guys and it’s not exactly like it was just another offseason. There wasn’t a boot camp or week of grinding out testing on the bike or anything like that. So, in one sense, everyone should have the cobwebs shaken off the bike and off themselves given that they have actually already raced this year, but that might not be exactly the case. This race could potentially look like an opener even where we see riders at a loss for bike settings and the intensity of racing again being a reality check for some who might be a bit off in the fitness department. It’s not A1, it's SLC1! -Brauer

Not only are we not racing with fans, but we’re also having a full-blown day race for this first round. Start time for the racing is 1:00 p.m. local time so racing will be done well before the sun goes down and will occur at the hottest point of the day. This has the potential to really dry out the track, as JT alluded to in his column on Thursday, and create a very slick surface. Riders will contend with a bit of heat that isn’t normal to supercross racing and have a rather technical track to deal with which could shake things up from the first gate drop. -Brauer

A few years back, the idea of a “chase” for the championship was being floated around to spice up the championship down the stretch. The 2017 season and all its’ drama seemed to dissipate those rumors, but now we don’t even need sanctioning body intervention to get said chase. The 250SX East Region has five rounds left of their championship and points are still fairly close. The 450SX class has seven rounds left and again, the points are close. Everyone is rested, a championship is in sight, and we know who the players will be. Let the “playoffs” begin! -Brauer