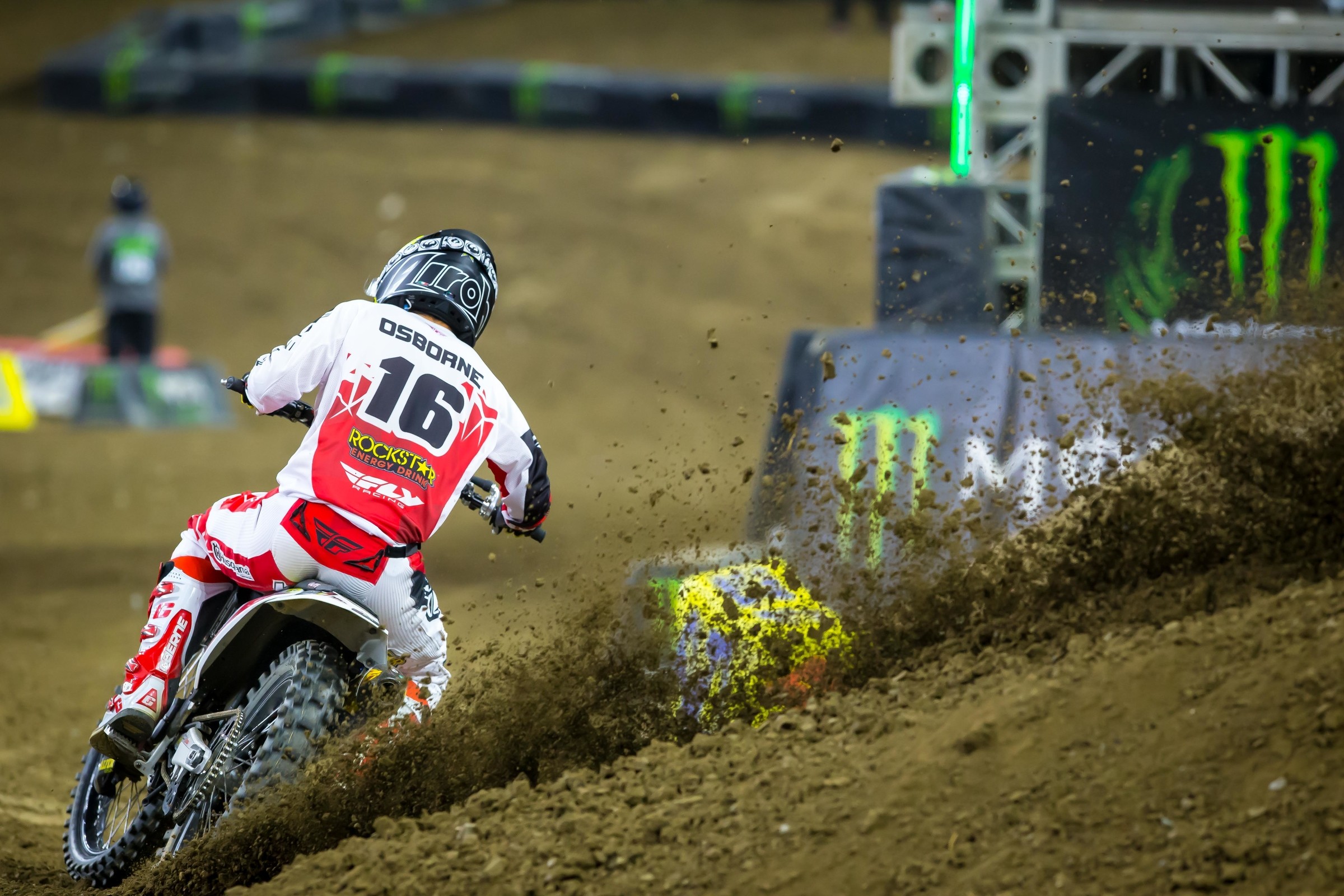 Saturday Rockstar for a Day

This story, from the Detroit Supercross at Ford Field, appeared in the July 2017 issue of Racer X Illustrated.

Zach Osborne has seen it all in his 11-year pro career, from Europe’s Grand Prix circuit to off-road races like the ISDE and plenty of supercross tracks. So it’s surprising that at 10:30 on Saturday morning at Detroit’s Ford Field, his Rockstar Energy Husqvarna teammates Jason Anderson and Dean Wilson are walking the track while Osborne is hiding.

“He doesn’t really like to walk the track,” his wife, Brittney, says. “It scares him.”

“If I walked up to the face of the finish-line jump, I’d say, ‘No way anyone can jump this,’” says Osborne, currently the 250SX Eastern Region points leader. So instead of walking, he starts talking to people. Talking, talking, more talking. This Rockstar Energy Racing Husqvarna team is never short on words, and we’re here to listen.

It’s a packed weekend for the team—the only factory outfit with riders in both classes. None of the riders have motor homes, and while the team usually works with two semis, one has been dispatched to Texas for the James Stewart Amateur Spring Classic at Freestone County Raceway. Plus, the pits are tight due to Ford Field’s downtown confines, so teams can’t even open their awnings. Over the next 12 hours, a mashup of personalities and personal highs and lows will weave in and out of this one rig, and the team will share the experience together—and with me.

Team owner Bobby Hewitt and Anderson, who has been with the team for his entire seven-year pro career, lead the dynamic. Hewitt looks for serious answers to problems, but Anderson is never serious, and this cat-and-mouse game keeps the truck focused on improvement but also loose and fun. After track walk, Hewitt starts talking about lines and jump combos. Anderson and Osborne dig in immediately.

They make fun, but they also listen. Team technician “Scuba” Steve Westfall pokes his head in after working on equipment in the back and asks Brittney if she can film Anderson in 450 practice. She says yes, and everyone grabs their cameras and heads to the factory filming room on the stadium’s seventh floor. Mechanics Dave Feeney (Osborne), Dan “Mohead” Castloo (Wilson), and Chris Laredo (Anderson) load up for practice.

The team has an early advantage in practice: they all rode press day on Friday. So Osborne, without walking the track, goes to the top of the 250 charts. Anderson also puts his #21 on top early in the 450s. Back at the truck, Hewitt tells Anderson to work on the whoops and Wilson the 180 corners; he also shares some start techniques. Everyone agrees that Osborne looks good, but there’s a big discussion about a wall jump. Is it possible to jump the wall?

“Dude, you do that and they’ll have to peel you off the roof of the stadium,” Anderson warns.

The riders hang in the lounge, watch film, and talk continual trash on each other—especially when a video catches someone over-jumping something. Aldon Baker, trainer for Anderson and Osborne, and then Tyla Rattray, who works with Wilson, pop in and add to the fun.

“Hey, Tyla, I finally found someone that looks worse in supercross than you,” Anderson says. “I was watching nineties supercross videos, and Greg Albertyn. . . . Wow, what’s in the water down there in South America?” (He means South Africa.)

Osborne then realizes that both he and Anderson raced Rattray in 250SX West in 2012, and after two races, Rattray held the points lead.

“Yeah, that’s right, I hung the red plate on both you boys,” Rattray laughs.

Talk shifts to this season’s pitched 250SX East fight. Osborne leads, but last week featured some controversy between him and Monster Energy/Pro Circuit Kawasaki riders Joey Savatgy and Adam Cianciarulo. Hewitt was already mad that the FIM’s John Gallagher had a meeting between practices the previous week after his run-ins with Cianciarulo. Osborne says nothing rattles him anyway.

“What those guys don’t realize is, I don’t care,” he shrugs. “Nothing gets in my head because I’ve been down at the bottom. I’ve been at a gas station in Germany out of money, not sure how I was even going to call home. It’s all a matter of perspective.”

Fly Racing’s Max Steffens pops in to talk to Osborne about a photo shoot that was held at Blake Baggett’s track. Osborne apologizes for only doing one short session, then heading back to Baker’s for his regular work. Steffens says that with Zach in title contention, he can do whatever he wants. Dunlop’s Brian Fleck comes in to talk tires, and team tech Westfall goes over some suspension settings. Then it’s time for more practice.

“Hey, did you ever live in Morgantown, West Virginia?” asks Feeney, Osborne’s mechanic, before we head out. We start exchanging stories.

“Man, was that town fun,” Feeney says of the home of this magazine (and host town for the High Point National). “Found a place that let you fill up your beer cup for 99 cents. And it was any cup you wanted! You could bring in a Big Gulp, and it was 99 cents!”

Osborne is second, Wilson third, and Anderson says he’s “sucking right now” after getting 12th. Scuba makes some suspension suggestions. Luckily, all-time qualifying master Christophe Pourcel is visiting for the weekend after dropping out of supercross with neck issues.

"Hey, remember when you were first on the team and we weren’t good friends yet?” Anderson asks Pourcel. “I would ask you for your practice secrets and you would just say ‘I got lucky.’"

"Hey, I can't give you all of the secrets," says Pourcel, who then chimes in with helpful suggestions.

Usually, when I talk to riders, I basically hear about starts, starts, and starts. Now I get to hear the good stuff.

“Zach, you need to get a little further onto that table there, because you’re landing and the suspension is unloading,” Hewitt says.

Talk drifts to Christian Craig’s huge bump on Alex Martin in practice. The 250 class is getting chippy, which is nothing new.

Anderson turns to Wilson. "Hey, it was pretty funny when we had heat our year," he says—their year being 2014, when they were up front in the 250s. “You were yelling at me every week.”

“No, I wasn’t!” says Wilson in his thick Scottish accent. “You were just pissing me off that one time in Phoenix. You would go out first, and then you were just brake-checking everyone.”

On the other end of the rig, Rockstar Energy’s James Hanson and Dragon Goggle’s Kenny Adams work in tandem, silently, tending to needs but never getting in the way. Then they slip out for lunch while the mechanics dig into catered Chipotle and Osborne and Wilson lie down on the floor, trying to take a nap . . . or meditate or something. Anderson asks Pourcel’s wife, Sam, if she can get him some food.

“Hey, Weigandt, this is a great way to save money,” Anderson says. “Instead of having a girlfriend and flying her to the races, you just ask someone else’s chick to do it.”

Scuba’s rear shock change helps Anderson immensely in the final session. He rides much better. Baker comes in smiling: “There it is buddy! There it is!”

“I feel fired up again,” Anderson says. “Not like I didn’t want to be here the last few races, but now I really can’t wait to get out here and try to kill it.”

Wilson is bummed he couldn’t avoid traffic and make a clean lap, and Osborne is losing time in segment two of the track.

Hewitt busts out the videos again. Yamalube/Star Yamaha’s Dylan Ferrandis is fastest in that session.

“Dude, you should have seen how good Ferrandis looked on that lap,” Anderson says. But now the group is joking that Ferrandis, who is French, might be Spanish, and they start calling him “Ferrandez.”

“Ferrandez killed the sand section, then two-wheel drifted into the lip, perfect downside somehow, then greased before the finish,” Anderson adds. “It was so sick.”

They start talking about style, and Osborne mentions training at Eli Tomac’s place, where he was required to do laps without a rear brake or clutch. Anderson says he wishes he’d done work like that when he was younger, because all he did was log motos.

“That's pretty amazing, because you have such sick corner style,” Wilson digs. “I really have to work on it."

“Better than Zach,” Anderson responds. “He normally rides like a Chihuahua on cocaine.”

About an hour before the night show, Osborne receives news that racer Cody Gragg and his father, Chris, have died in a motor home crash on the way to a GNCC in Georgia. Osborne knows the family well, and the news hits hard.

Outside, Wilson’s mechanic, Mohead, is scrambling around. Someone has stolen his backpack, complete with his wallet and passport.

The truck is silenced, finally, after 450 heat two, when Anderson block-passes Wilson in the final corner to steal the last transfer spot.

Wilson is mad but doesn’t want to ruin the vibe. He heads up to the top of the rig, where the riders change, and sits silently with his girlfriend, Sarah; Anderson hangs in the lounge. He avoids conflict by just letting the emotions evaporate before saying anything. By the end of the night, they’re fine.

Wilson makes the main through his semi. The main events are next.

Osborne’s 250 title bid quickly turns to disaster. TLD KTM’s Jordon Smith cuts across from the outside and ignites a huge pileup—and also busts spokes from Zach’s front wheel. Osborne has to go to the mechanics’ area for a change and is two laps down before completing his first lap. He can only salvage 19th and loses the points lead to Savatgy.

Because the rest of the team has to stay out for the 450 main, Osborne retreats to the team truck alone, until Brittney finally makes her way down from filming.

“After what happened to our friends Chris and Cody, we’re thinking about how things are a lot more important than a dirt bike race,” she tells me.

Zach keeps his emotions in check.

“I told you earlier, it’s all about perspective, Weege,” he says. “I’ve been on the top and the bottom. You have to see the big picture and not get caught up in one thing.”

Zach and Brittney settle in to watch the 450 main on the TV in the lounge. In it, Anderson finally gets a good start—his first all season. He wastes it, though, crashing in the slippery dirt after the finish line. He’ll fight his way back to sixth, passing Wilson again along the way. Wilson tells me he’s okay with it all, though he wants more. But his original goal this season was to get top-tens and stay healthy after so many injury-plagued seasons. So he tries to stay happy.

Anderson is also happy, because he feels like he’s riding better. By the end of the night, Wilson and Osborne are long gone, but Anderson is still there as the mechanics strap in the bikes and finish packing the rig. Anderson keeps talking and talking.

“To be honest, I just talk a lot when I’m nervous,” he admits. He fits right in with the Rockstar Energy Husqvarna Factory Racing crew, because this whole team talks a lot.