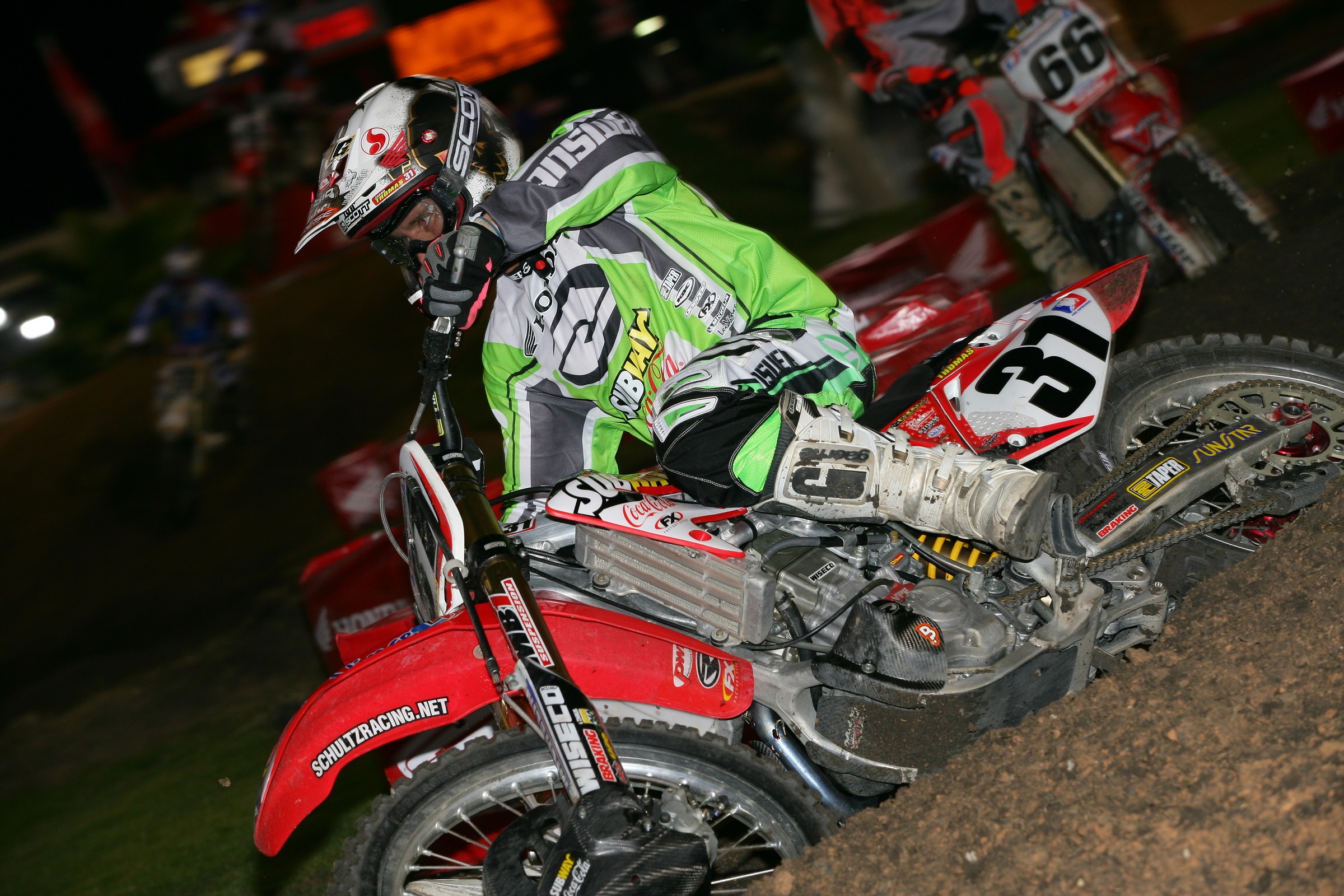 With the 2020 Detroit Supercross canceled, we’re focusing on other key races that took place inside the Great Lakes State. Our own Jason Thomas raced professionally in AMA Supercross from 1997 through 2012, making 131 premier-class main events.

He shares some stories from within the ranks from Michigan.

Last weekend would have been the Detroit round of the 2020 Monster Energy AMA Supercross Championship. Detroit is a unique round with its downtown location disallowing a pit area. For the fans, I have likened it to the “lock-in” that many skating rinks would have during the summer. In those lock-ins, parents would drop kids off and they were able to hang out all night, skating the night away, but they were also not allowed to leave the building. Detroit reminds me of that because once I go inside Ford Field at 8 a.m. Saturday morning, I don’t leave again until nearly midnight. It doesn’t look like we will partake in the 2020 Detroit lock-in but this race, whether Detroit or the former Michigan round in Pontiac, created a lot of memories for me.

In 2004, we were racing at the Pontiac Silverdome, north of Detroit. Pontiac was the then home of the Detroit Lions and predecessor of Ford Field. Ricky Carmichael was on the sidelines that season. He had knee surgery in December, forcing him to miss the first championship season of his career. It was also the last year of his Honda contract. Remember, at the time, Carmichael was the three-time defending supercross champ and had never lost an outdoor title. His knee injury had been a nagging problem and having been through that myself, the constant dislocation while riding is not much fun to cope with. From my perspective, Ricky re-signing at Honda was a no brainer. Honda was on the cutting edge of four-stroke design and had deep pockets to keep 24-year-old Carmichael well-funded. It was almost a foregone conclusion that he would stay at Honda and lead big red to more titles. So, as we headed to Pontiac on April 1, 2004, news broke that shook the entire sport. Or did it? April 1 is also known as April Fools’ Day. Pranks, hoaxes, and common lies are spread in a hope of tricking your fellow man on April Fools’ Day. So, when word spread that Ricky Carmichael was leaving the most successful factory team in history, Team Honda, for Roger De Coster’s factory Suzuki squad, it was almost beyond belief. I remember the first words out of my mouth being “Haha, yeah right.” It was just inconceivable in my mind. Suzuki was not necessarily synonymous with winning at that time. They had spent big money on Travis Pastrana and Kevin Windham in recent years but hadn’t gotten the 250 results they were looking for. This move sent shockwaves throughout the racing world-at-large, and we were all there in Pontiac to talk about it.

Details started to come out. Not only would Carmichael switch to Suzuki for 2005, 2006, and 2007 seasons, his salary demolished any deals that came before this. Rumor had it that Suzuki had taken Carmichael’s total Honda payout in 2003, including salary, race bonuses, and championship bonuses, and guaranteed it for the next two years, with a third-year option. He would then be able to rack up more win and championship bonus money on top of that enormous starting point! That guaranteed number was supposedly north of $4,000,000, putting his yearly earnings at Suzuki at a number approaching $7,000,000. It was a blockbuster deal that completely changed the landscape of American racing. The GOAT was leaving Honda and going to, at the time, unproven Suzuki.

I don’t even remember how I did that weekend. I want to say I finished 13th maybe? All I know for sure is that while I was on the starting line for the main event, I was more interested in discussing Carmichael and his Suzuki switch than I was in my own race. I'm not kidding! I remember asking other riders if that was for real or this was an incredibly well executed April Fools’ joke. They looked at me like I was the April Fool because we were literally on the line for a supercross main event. Maybe that’s why I am still writing about this stuff today, I was more interested in talking about racing than actually doing it.

Two thousand five was the last year of racing in the Pontiac venue. My memory of that weekend wasn’t even as much about the race as it was the circumstances around it. Everything was pretty normal on Friday morning, practice went off and I headed back to the nearby hotel to relax and shower before dinner. Unfortunately, power went out for the entire area that afternoon. With nothing to do, I was just lounging when news broke that all hotels would be evicting their customers for the night. Power would not be coming back on so we all had to leave. As you can imagine, everyone was sent into red alert trying to find somewhere to stay. Riders, mechanics, and fans alike were all sent scattering across eastern Michigan on Friday night. I ended up sleeping on a roll-away in Nick Wey’s room, an hour away in Detroit (thanks Nyk). The main conversation on Saturday wasn’t even about the race, it was more about where people ended up sleeping and how their night went.

The final memory I have to share was from the 2008 season. I was best friends with Chad Reed and he was well on his way to his second Monster Energy Supercross Championship. That is, until he crashed his brains out in practice that afternoon. His 450 bogged on a step-on/step-off and he did a front flip. That left him broken and in a hospital while the rest of us were relaxing in anticipation of the night’s racing. Being close with him, I was desperately trying to get info as to his condition. I knew he would try to race, because he might be the most hard-headed human on earth. How could he, though? His shoulder blade was broken and he was coughing up blood. Back then, there was a provisional qualifying position held for any rider inside the top ten in points. That meant that Reed would just need to start the heat and LCQ races to have a guaranteed spot for the points paying main event. Even then, would he be able to ride at all? He had a 27-point lead over Kevin Windham but that could be nearly erased in one missed night of racing.

As opening ceremonies approached, Chad made it back to Ford Field but looked rough. I could see the pain in his face and wondered how this would go. He did the necessary starts, rolling around a lap or two to earn his provisional position for the main event. As we headed down for the final race, he told me he was going to try to ride all 20 laps. Knowing his situation for the title and also knowing that he would have the very last gate pick, I offered him my gate. Larry Brooks (Chad’s team owner/manager) jumped in immediately to remind us that we could be protested for that. Honda was looking for any opening to get Kevin Windham into the championship lead. As a Honda supported rider myself, it was probably a bad idea to begin with but I knew Chad would need all the help he could get.

During the main event, I never saw Chad but knew he was behind me somewhere. I could see his mechanic, Oscar Wirdeman, preparing the pit board as I went by each lap. I was racing around in tenth position and remember worrying about Chad’s points more than my own result (again, maybe I was too interested in other rider's races than my own). After the race, it was like we both won the main event. I got a top-ten and Chad somehow managed 12th-place with a broken shoulder. He left Detroit with a 16-point lead, far better than many guessed when he was at the hospital on Saturday afternoon. More importantly, I didn’t let Chad beat me in that main event. Had he beaten me coming straight out of triage, I don’t know that I would have survived the barrage of insults and jokes. I may have never ridden harder than that main event, knowing what was at stake. For one night, I was better than Chad Reed and  broken shoulder, abdominal contusions, and blood vomit. That’s a career highlight I can hang my hat on.