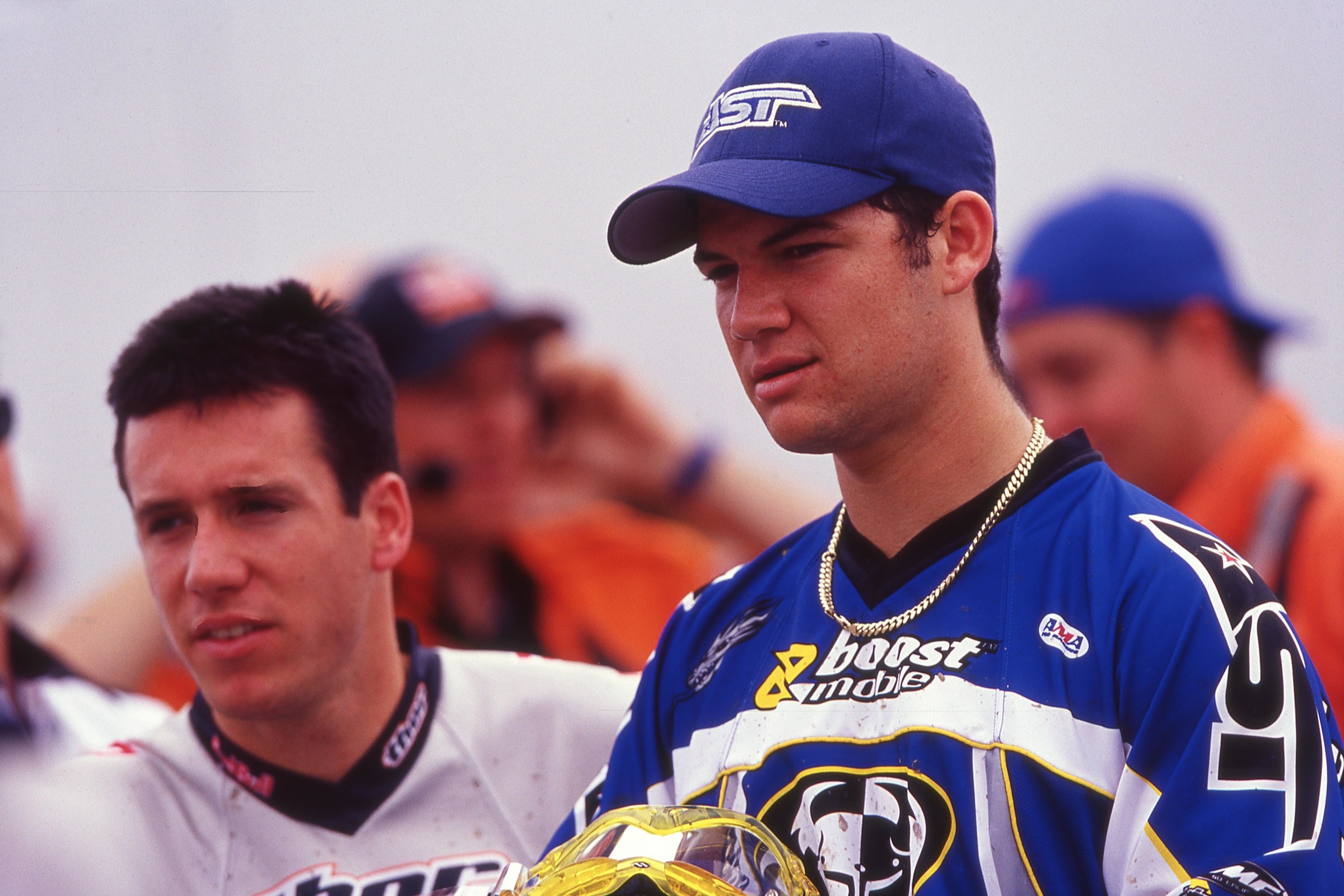 A lot has changed between since the 2002 Indianapolis Supercross ran back on February 9 of that year, and when the 2020 version was set to run last Saturday night, March 14, before, well, you know…

The stadium the race was held in, the RCA Dome, is now gone, replaced by Lucas Oil Stadium. The series—AMA/EA Sports Supercross—is now called Monster Energy AMA Supercross, an FIM World Championship. The class we’re featuring—the 125cc class—is now 250SX. The event had then-rare next-day coverage on ABC’s Wide World of Sports. Even the promoter, Clear Channel Entertainment, has gone through several name and ownership changes, and had the 2020 Indianapolis Supercross run, it would have been produced by Feld Entertainment.

The one thing that would have been the same is that Chad Reed was signed up for both the 2002 version and the 2020 version—he’s the only rider that was out there 18 years ago that’s still out there. Back in 2002 he was a teenaged newcomer from Australia, riding for the late Phil Alderton’s Yamaha of Troy team, the vaunted “Fifth Dragon” of AMA Supercross. (To Phil’s mind, the first four dragons were the Japanese OEM teams—Honda, Kawasaki, Yamaha, and Suzuki—as KTM was just finally beginning to blossom in supercross, and Husqvarna, by then made in Italy rather than Sweden, was trying to become relevant again with sport-bike icon Eraldo Ferracci at the helm).

Alderton had hired Reed from the Grand Prix circuit, where the Australian had first emigrated in order to make a name for himself, then get a good ride in America. He rode for Jan De Groot’s Kawasaki team, and was good enough to win the 2001 Belgian 250cc Grand Prix over that country’s superstar, Stefan Everts. But Reed’s goal growing up was to someday be the AMA Supercross Champion, not the FIM World Champion, and he jumped at the offer of Alderton and Yamaha to do a year in the AMA’s 125cc class, albeit on a YZ250F. He would move up to the Yamaha factory 250cc team in 2003, but he never really wanted to ride the small-bike class at all.

Alderton has tried this “international hire” route before with great success, bringing on French rider Stephane Roncada and Costa Rica’s Ernesto Fonseca, and both delivering an AMA 125cc Supercross title (two in Ernesto’s case), but this was the first time he had hired an Australian. Reed showed immediate skill on stadium tracks when he rode the first three West Coast rounds in the 250cc class and finished 6-5-8, respectively. Indianapolis would be his first race as a 125cc East Region rider, though it should be noted that way back in 1999 Reed rode the San Diego 125SX on a Suzuki RM125 and finished a modest 17th place.

Despite the fact that the 125 East Region was packed with veteran talent, as well as future 125SX Champions like Grant Langston, another Grand Prix import, and Branden Jesseman, Reed was everyone’s pre-race favorite, given his 250cc results from early January.

And here’s something for you, Steve Matthes: Coincidentally, the race had what was likely the oldest extended podiums ever for the 125cc class. The winner, Reed, at 19 years old, was easily the youngest among them. Second-place rider Mike Brown (Pro Circuit Kawasaki) was 29 years old. Third-place Buddy Antunez (Blimpie Suzuki), already a five-time National Arenacross Champion, was 28 years old. Fourth-place Larry Ward (Moto-XXX Yamaha) was 31 years old. And oldest of all? Fifth-place John Dowd (Cernics.com KTM) was 36 years old! Cue a Matthes rant on 125/250F supercross rules.

The race started with one of those cliché racing moments: Kelly Smith noticed on the sighting lap that his front tire was going flat, so the race was held up while his mechanic frantically changed it right on the starting line. At that point TV commentator David Bailey looked at his partner, Terry Gannon, and said, “Betcha he gets the holeshot.” And of course Bailey was right—Smith grabbed the Powerade Holeshot to start the main event!

But Brown, the reigning 125cc AMA National Motocross Champion, immediately moved to the front, and for ten laps he would lead Reed. Bailey observed early in the race that Reed, who had never raced a 250 four-stroke before, “appears to be getting more comfortable with this 250F four-stroke machine by the lap—he’s going to keep getting faster and faster throughout this main.”

Along the way he had one close call, coming together with Langston in the whoops. Reed held on but Langston went down hard and was knocked out of the race. (And before he left the stadium floor he did take a moment to have a word with the third member of ABC’s broadcast team, a nervous young cub reporter—me!)

Watch the video below at the 11:30 mark to watch the incident and 13:20 is when Langston joins me for a quick word during the broadcast:

As you watch Reed track Brown, and through the 20/20 prism of hindsight, it’s obvious to see how much more comfortable and gifted he is on a supercross track at this point of his career than the versatile veteran Brown ever was. It’s almost obvious that one of these two stellar motorcycle racers—both future AMA Motorcycle Museum Hall of Famers—would go on to win multiple AMA Supercross Championships and dozens of main event wins, and the other is Mike Brown!

Twelve laps in, Chad would finally work his way past Brownie over a triple-jump (right when they threw it down to me for an update) and the race seemed settled. But then a red cross flag came out on a double-jump that Reed didn’t seem to see, and he doubled the jump while everyone else behind him singled it. (Ironically, the red cross flags were for the other Australian in the race, Amsoil/Dr. Martens Honda’s Michael Byrne, who had a very big and scary crash. Byrne is now the team manager for Rocky Mountain ATV/MC-KTM-WPS, and that Honda team he was on in 2002 is now known as GEICO Honda.)

Check out these issues of Cycle News on the 2002 Indianapolis Supercross:

“I’ve dreamed of coming to America to do this my entire life,” Reed told Cycle News reporter Dave Deringer afterwards. “I’ve been racing a 250 since I was 12, and didn’t really give the 125cc class a lot of thought, but it’s what the team wants me to do. I actually enjoyed riding the 250cc more, but I expected to win tonight.”

When asked if his 125 SX win was bigger than the Grand Prix he won the year before in Belgium, he replied, “Winning the Grand Prix last year, it was good, but I never dreamed of nor ever really wanted to go to Europe; it was just how it worked out. This has been everything for me. This definitely means more to me.”

Watch our latest Race eXamination, which highlights the racing in both classes at the 2002 Indianapolis Supercross.

Reed not only gave American fans a quick lesson in his supercross skills and talent, he further introduced the outspoken personality that has become his trademark. In his podium interview, instead of merely soaking in the 125cc victory, he mentioned how, “it’s not the 250 class.” Reed had goals much higher than winning 125cc races. For some fans, that came across as cocky.

“I know I got beat up for it,” Reed told us this week. “At no point was I cocky. I just really felt that that (250 class) was the class that I belonged in. I went straight from amateur to that class. I never raced 125 professional. I was already a two-time Australian supercross champion. My first year in Europe I was second in the world championship in the 250 class. I felt like I was more than qualified to be in that class. I honestly think had I have raced that championship (in the premiere class) in 2002, I would have been finished top three in the championship. I really believe that, but I didn’t. We’re talking Lites class!”

In winning the Indy ’02 125SX race, Reed found his first place of many in the supercross record books—he became the first Australian ever to win in this series. And 18 years later, he remains the only Aussie ever to win in this series. He’s also the only rider ever to compete in AMA Supercross in four different decades (‘90s, ‘00s, ‘10s, ‘20s) and he’s started more 450 SX main events than anyone ever.

Not bad for a kid from Kurri Kurri, Australia.