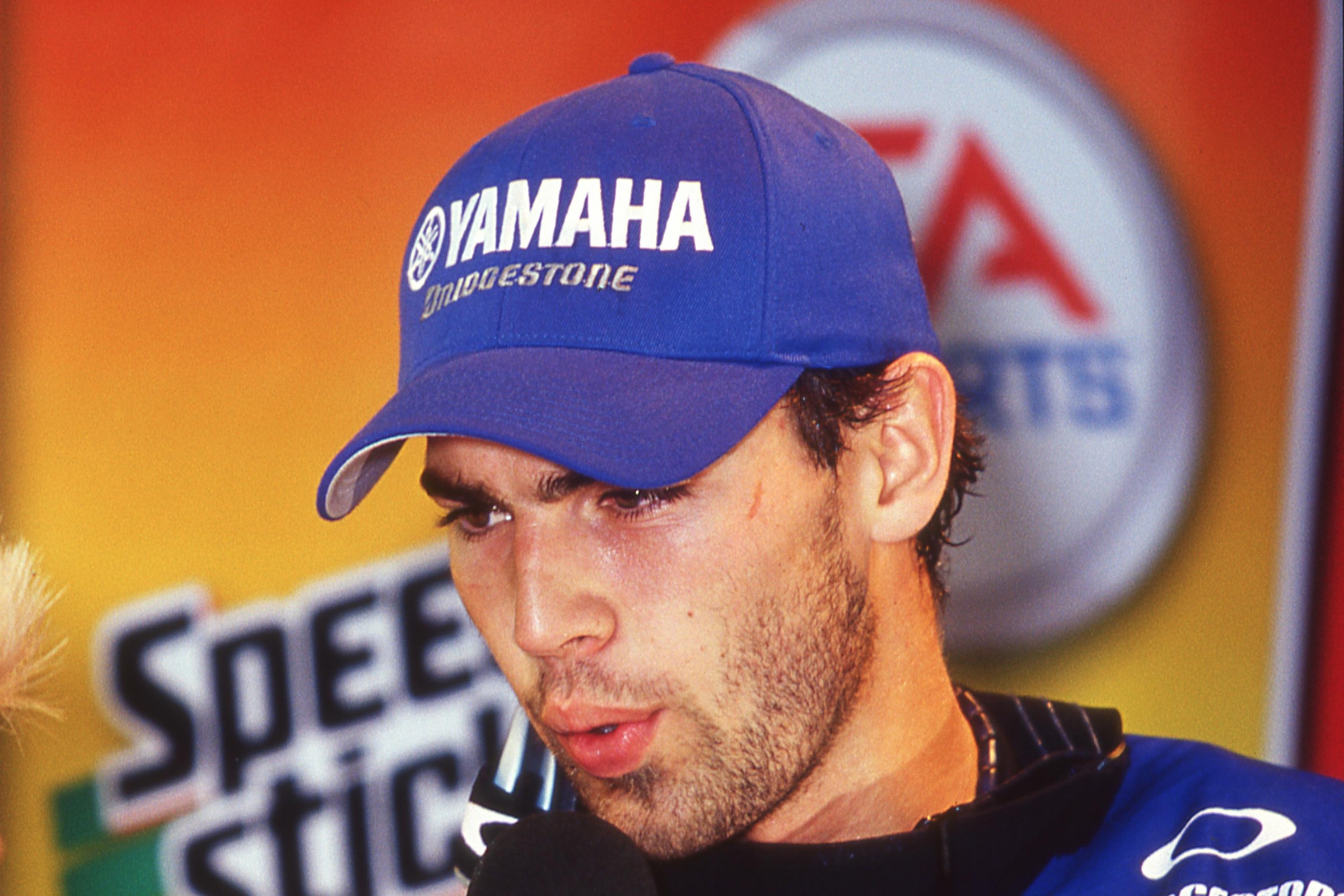 The 2002 EA Sports Supercross series coulda, woulda, shoulda turned out magical for Yamaha’s David Vuillemin. He won Anaheim 1 while defending champion Ricky Carmichael crashed out on his Honda, and seven-time champion Jeremy McGrath struggled. Vuillemin won round two at San Diego.Things seemed to be looking good for the Frenchman approaching the halfway point of the series. In Indianapolis on a cold night, DV12 put in a great ride to get past Suzuki’s Travis Pastrana and Carmichael and grab the win. It was one of the biggest wins of his career, and also, it would turn out to be the last race supercross race win of his career, also.

Racer X Online: First up, the 2002 series for you was really good up until the injury. Indy was one of the races that was great. But before that, coming into ’02 you felt pretty confident?
David Vuillemin: Yeah. I had a good winter to prepare with a new coach. I worked with Jacky Vimond the off-season. Two-thousand and one was tough with some injuries. No supercross podiums. Broken collarbone, broken ribs… It was tough. Changed everything around for ’02. Worked hard and the usual. Bike was good. Worked hard. Good winter. I was ready to go when it came A1.

So you won A1 that year.
Yeah. I won A1 and San Diego to start. Then I don’t remember the rest, but I think out of 16 races I podiumed 14 times or 13 times. It was good all the way until obviously I got hurt during this photo shoot. Actually Indy ’02 is my last ever supercross win.

Note: Before the Daytona Supercross, Vuillemin went out with MX Racer Magazine for a photo shoot and got off wrong taking on a jump, knocking himself out and hurting his shoulder in the process.

What do you remember about that Indianapolis race?
I remember the track being a little tough, rutted. There was a rhythm section that was sketch before the finish. I wasn’t even doing any triples in it, I remember. I stopped doing it because it was too sketchy. But I wasn’t losing time, obviously. The track was rutted. Kind of tight in some spots. The whoops got a big rut in the middle that you had to get out of to be good. Ricky stayed in it for long and then was swapping around a lot. I was just going outside the rut. It was pretty good. I think I started first, and I got passed by Ricky and Travis [Pastrana] right away. I never liked to lead races from the beginning. A lot of times I’d rather be in the hunt than being in the front so I can see. I had confidence in my fitness, so I could go the whole moto. I was kind of like studying basically the guys in front. Mainly Ricky because I really didn’t think Travis was going to be there for the long run.

Obviously at that point, the goal was to win the championship, not to win every race. If we were in the position to win, we would win. But it was good to stay consistent in front, on the podium every weekend. So I was kind of studying the guys. Obviously Travis missed the rut and then Ricky hit him and he crashed. Travis was out of the race. I think it was pretty much midway through. I don’t really remember exactly, but it had to be like halfway. Then I was behind Ricky. I felt like I was pretty comfortable behind. The pace was not crazy fast. I was comfortable and trying to find lines. If you watch the race, not the highlights, but if you watch the race and the whole 20 laps, when I get to Ricky you can see that I’m trying a few… There’s a couple passes that I knew I could make it stick at one point. But you got to take into consideration that you’re racing Ricky Carmichael. At that time, he wasn’t the GOAT, but he was the best guy. The guy in the best shape and the guy that really wanted to win and to get out of his comfort zone to go even faster. So I didn’t want to pass him too early. I didn’t want him to try to pass me back later on. So, it was a gamble.

After you crossed the starting line in front of the mechanics, I was doing that little inside, and he was going outside and doubled right away in the rhythm section. I was doing the little step-up, and then rolling the first one. Every time I was catching him. I said, I can maybe go fast in here. Also where I passed him later after the finish line, I had a good line where I could downside the tunnel, the bridge, and he had a tough time being very precise. He would over-jump it or he would clip it and he would go wide. I saw that a couple times before I passed him. I actually set it up. I’m like, maybe I can pass him here too. I got a little surprised because that marquee showed last lap. I was like, dude, I only have two spots to pass now. I waited too long. I need to get on it. So the first spot I could pass him is after the finish, and the second spot was after the mechanics. So there was only those two things. So I was like, I got to try both. If the first one doesn’t work, then I’m going to have to do the other one. On the white flag, I jumped downside to the inside really nice, and then just took the inside before going under the bridge. That was actually a nice, clean pass. As a strategy, that is what I like to teach Dylan [Ferrandis] is the race strategy. The strategy actually worked really well. But I kind of waited a little too long. I could have done it a couple laps before. One of the races I remember that I was doing pretty much the same thing was in Dallas the same year. It actually didn’t work. I was better than him, and I almost passed him at one point. I let off because I didn’t want to lead that many laps in front of him. There was a switchback, like a 90 right across the starting line, and then a 90 left with a dragon’s back just before. I was doing that section really well. I could have passed him twice, and I didn’t. Then he picked it up, and I was never in position to pass him again and he won the race. Sometimes strategies like this don’t always work, but in Indy it actually did.

Do you remember the booing? Did you say anything to him on the podium about the booing for what the fans thought was knocking down Pastrana?
That was really bad. I remember hearing it. It was crazy. It was like a wave of boos everywhere he was on the track. It was crazy because I was never a fan favorite, but that night I was one of them because when I passed him everybody was cheering, everybody was happy because I passed the guy that took out the big fan favorite.

He didn’t even take him out, though. That’s what’s funny.
No, he just passed him.

Obviously we all know how 2002 went. You had almost the points race lead. Couldn’t bring it home because of the crash and the injury. You think about that much often? I’m guessing you don’t, but do you think about what could have been?
No. I think it would have been better obviously to fight for the championship healthy. Obviously, Ricky from 2000 outdoor season when he finished the championship he never lost one. So it’s tough for me to say I would have beat him that year, because nobody else did. So why me? But I was in a good position. I had a 20-point lead, so almost a race. Didn’t race Daytona. He won, and then I had a deficit. I broke my shoulder blade, so after that you can’t really compare because I wasn’t 100 percent. But I think for my legacy it would have been better to be champion. I think historically there’s a few supercross champions that I think I’m better than them as a rider. But I’m not in the record books. Maybe that would change the views of the people that if I was champion that I would be a little different, maybe more respected. Today in 2020 and being a champion in 2002 or not wouldn’t change my life one bit. That would have been cool to have because for a guy that raced supercross, this is the ultimate goal to be champion. I got second twice. One time behind [Jeremy] McGrath, one time behind Carmichael.

So those are not bad riders to get second to. But as a personal thing, I would have liked to see if I was capable of going all the way. Not for the title, not for the money, but to see if I could have finished off the eight races, because I was leading after the eighth race. I think that was Atlanta. Then I didn’t race Daytona. I would have liked just as a personal thing to see if I could have done it. I worked hard and I think the bike was good. I was well-prepared. But we’ll never know.