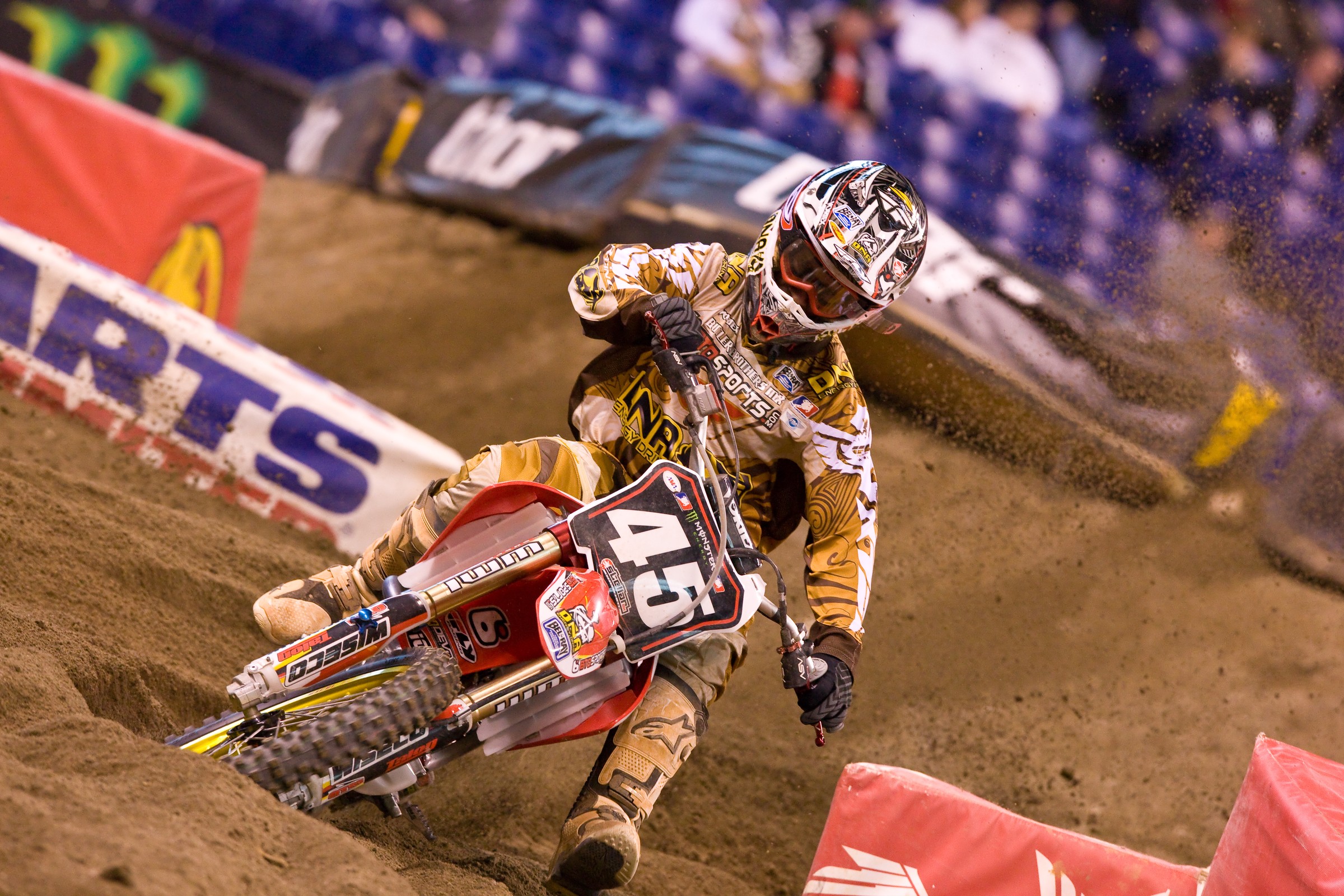 With the 2020 Indianapolis Supercross canceled, we’re focusing on other key races that took place inside the city. Our own Jason Thomas raced professionally in AMA Supercross from 1997 through 2012, making 131 premier-class main events.

He shares some stories from within the ranks at Indy.

Indianapolis will always hold a special place in my heart. It was the site of my first ever professional supercross race. The year was 1997 and I was still in high school. I flew out Thursday night while my dad drove up to Indy with the bikes and equipment. While I didn’t ride all that well and failed to make the main event, it was a huge learning experience and gave me memories I still have today. I can remember how incredibly rutty the track was, much ruttier than tracks in 2020. The most vivid memory I have was how chaotic the qualifying races were, though. The talent level of competition was so much higher than I had faced before, and their intensity was on a completely different level, too. These were professional racers competing for their livelihood. I remember thinking on my way home “I need to get a lot better... and quickly.”

Two years later, I would turn in my best ever 125SX finish at Indy. I was on the Excel Motorsports Yamaha team alongside Josh Demuth. The team was based 45 minutes south of Indy so it was a very important weekend to perform. We both rode press day, giving us a little insight as to what would come on Saturday. Things just came easy that day for both of us. Josh would end up getting a podium (third) and I would chase him to the checkers in sixth. As Josh and I were high fiving over our own main event, my training partner and best friend Timmy Ferry went out and grabbed his first 250 main event podium at Indy, too! It was a great night for all of us although I think Josh might have enjoyed it more than I did. He went to an after-party late Saturday night and didn’t surface again until Monday night. There’s literally no telling where he was or what he did, but that was Josh Demuth in a nutshell. I will give him credit, though, because on Tuesday morning, we went for a six-mile run like nothing had happened.

Another Indy that sticks out would be 2004. I was on the Subway/Coca Cola Honda team and had a decent season going. I remember riding the main event and not riding all that well. I was putting my laps in, trying to catch the pack in front of me as the leaders came to put me a lap down. Mike LaRocco was winning with Chad Reed on the charge. I could hear the crowd going crazy and knew they were approaching. When being lapped, rule #1 is to make predictable moves so the leaders can correctly choose where to pass you. Swerving out of the way seems instinctual but it’s a very bad idea. You have a 50/50 chance of swerving right into the leader’s path. If you stay the course and slow slightly, the leader blows by without much issue. That’s how I approached this particular race, also. As LaRocco went by, I just tried to do what Reed would predict. Unfortunately, the track had become very one-lined and I was in that preferred line. Reed had a difficult time immediately getting by me and that allowed LaRocco to maintain his lead to the finish line. I am sure Reed was angry but that’s how these things go sometimes. I can attest that the Indy fans were not upset, they loved every second of hometown boy LaRocco’s win. Ironically enough, Reed and I would later become very close. I wonder how I would have tried to maneuver differently had I been friends with Reed at that time? I don’t know if I could have done anything differently but I think I would have been more tuned in to the lead battle as they approached. If you ever go back and watch that race on YouTube, you’ll see me indirectly involved in a race for the lead that I had no business being a part of.

Indy 2008 was a fun weekend. I was riding well that year and loved the track. That particular track had been designed by Chad Reed technically but in reality, his team manager Larry Brooks did most of the work. It was creative and had big jump combinations. It separated riders due to its technical nature, allowing passes and innovative thought. I ended up 13th in the main event after piling into Josh Summey as he crashed in front of me. Still, I remember riding well all day and night. It was a cool track and a concept I wish we saw more of (rider input on design). As a funny side note, that night’s winner was indeed Chad Reed. He was the eventual champ that year but more impressive, his ability to party all night and then win the next night was the stuff of legends. He would drink with fans until the bars closed Friday, then entertain them with a win on Saturday. I often wonder how dominant he would have been had he actually applied himself that year, but he won the title anyway. I spent every day riding and training and he sat at home poolside, then he would lap me on Saturdays. Crazy, right?

Two years later in 2010, I found myself needing to go to the LCQ. I wasn’t thrilled about it as there is no more pressure filled event in racing than an LCQ. To make matters worse, Ryan Villopoto had crashed in his heat race and would now also line up for one of the two qualifying spots (they take four these days). I grabbed the holeshot and led the early laps without too much drama. I kept looking around wondering when RV would arrive. I finally spotted him, moving up quickly. He passed Weston Peick, who had been running second, and caught me fairly quickly. If you watch this event on television, you’ll see me point to my left over the triple as RV approached. With a gap to Peick, I wanted RV to make a clean pass and avoid losing time. The last thing I needed was to try to race RV, us slow down and allow Peick to get to my rear wheel. I also knew that holding off the points leader was very unlikely, if not impossible, and delaying the inevitable would only open the door to a block pass or worse, slowing my lap time and giving Peick the opportunity he was desperately chasing. By signaling RV to go inside and past me, I wouldn’t lose any time and could then chase RV and his much quicker pace. I practiced with RV quite a bit in those days, so I knew he would be careful on his way by, ensuring that both of us would have an easy last couple of laps. I can remember that LCQ like it was yesterday. It’s almost unbelievable that it was 10 years ago. Racing memories never die.