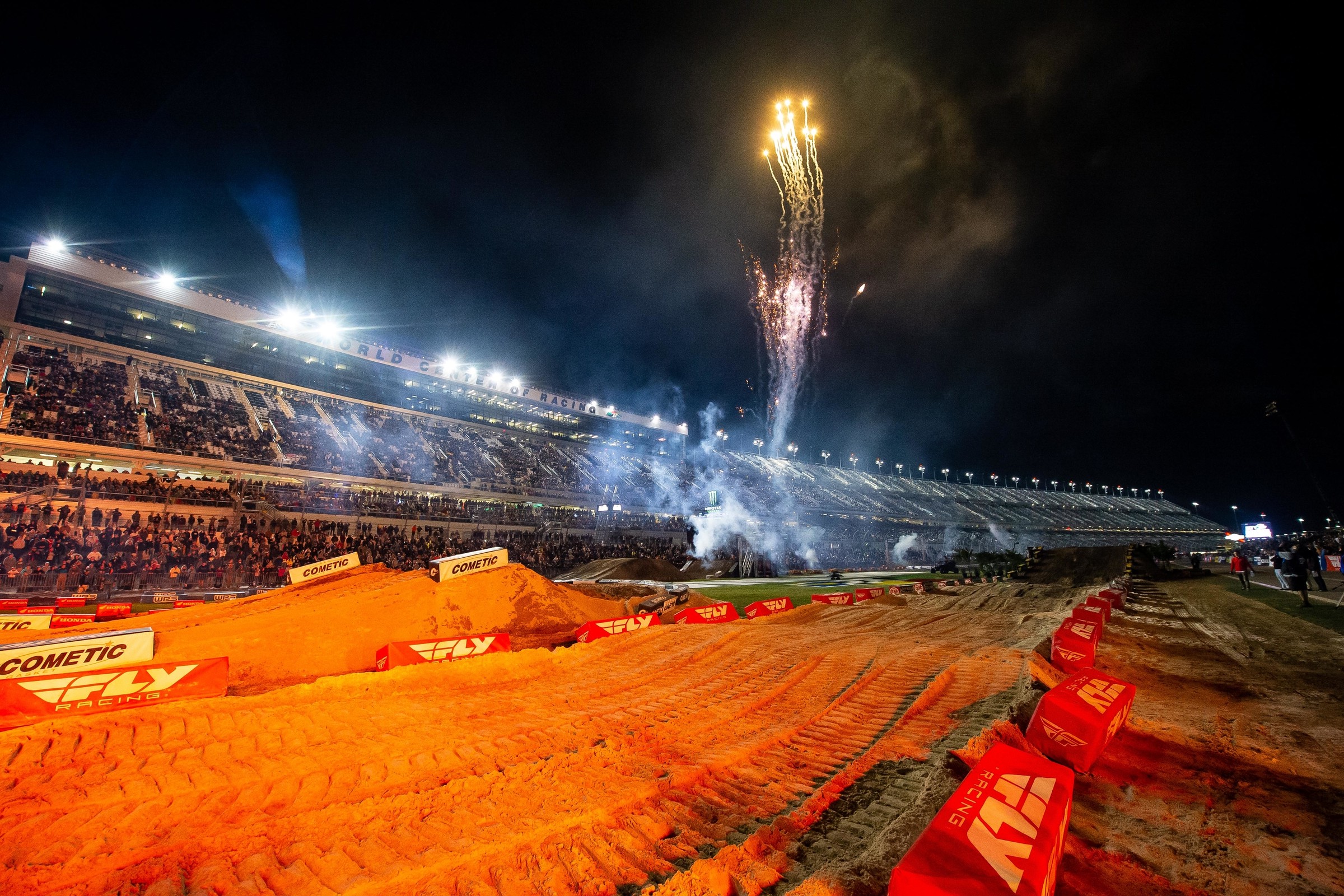 Once again, we fired off some questions to former pro Jason Thomas to get his insights from the Daytona Supercross.

In both of the 250 heat races, the first run through the whoops were complete carnage. They fixed it before the first 450 heat but what did you see that caused issues in the 250 Class?

Riders get three practices in the afternoon to learn the track and also qualify their way into the night’s racing. In each of those sessions, the track changes and the whoops, most notably, deteriorate. For the heat races at every event, whether Daytona or Anaheim, the track crew rebuilds the whoops. The most important aspect, however, is that they are almost always easier than they were originally built. Remember, riders are not allowed to walk the track again before the night’s racing nor do they get a viewing lap before the racing starts. They have to blindly trust the track crew that the jumps will be built in the same manner as they were a few hours before. When that doesn’t happen, you see chaos. As we saw Saturday, the whoops were much steeper than they had been all day long. I sat across from this section for the entire day and night, giving me a great vantage point to watch this unfold.

When the gate dropped for the heat races, riders expected a smaller, more forgiving whoops section than those that laid in wait. Without a chance to see them prior to the race, the more difficult whoops caught them by surprise and the result was huge crashes in both 250 heat races.

I believe this was an unfortunate, avoidable misstep. Track crews have to be ultra-careful with post practice track changes/wrinkles. A similar scenario nearly cost Grant Langston a 250 East Coast title in 2005. The Orlando SX that season had a very difficult triple out of the first corner. It necessitated a serious seat bounce to clear, the take-off being smaller than the landing. As Langston rounded the corner to attempt for the first full lap, he was unaware that the height of the first take-off had been lowered. He was committed to the triple but with the jump face change, it was now impossible to get up and over on his 250. He crashed hard; a victim of the track rebuild uncertainty.

It should be mentioned that the Dirt Wurx crew does a fantastic job with consistency on this week in and week out. It is always a variable that I keep an eye on, riders putting full trust in the track crew. I have to think this was a Daytona specific situation and an unfortunate one at that.

How brutal was this track, especially by the end of the night when the points were on the line? And what did you think of the first turn(s)?

Daytona always gets crazy rough by the end of the night. The sand base is no match for the four-stroke power being laid down. This specific track had more grass and sand than in recent years (50th anniversary throwback) and got rougher accordingly. I didn’t think it was all that bad in most sections, though. Many of the faster sections had lines with virtually no bumps at all. The trickiest parts were the slower chicane sections as many riders chose the same line and it formed deep, rough ruts. Go back and watch Daytona from say, 2000, and you’ll see a much rougher track altogether.

The first turn ended up being okay after all. I was skeptical but was also open minded. The never ending left definitely favored the inside but as long as we don’t see repetitive pileups, I am okay with new ideas.

Where did that ride from Garrett Marchbanks come from?!

I wish I had a good answer for you! We definitely saw a better Marchbanks at Tampa than at any time in 2019 (muddy San Diego doesn’t count). Still, I don’t think anyone saw this breakout Daytona ride coming. He was on fire all day and night, winning both his heat and the main event from start to finish. I am not sure if we can expect this same level once we head back inside the typical supercross confines, but his performance can’t be overstated. He rode like a wily veteran, mistake free and lightning fast.

Chase Sexton was charging hard towards Marchbanks but was never able to apply pressure to him. What were you seeing from Marchbanks that allowed him to hold off Sexton?

Sexton was trying but Marchbanks never really gave him any opportunity. For Sexton to pass him, he was going to have to go pass him with more speed. Marchbanks didn’t make the critical mistake that often plagues younger riders under the brightest of spotlights. He put in consistent laps and kept Sexton a few seconds back. Had Sexton actually closed to the back wheel of Marchbanks, that dynamic could have possibly changed. That was the most important factor to me, Sexton never got close enough to exert real pressure. Marchbanks was able to focus on his own riding instead of wondering where Sexton was behind him.

We saw riders using the split/option lane throughout the night. What did you think of this section?

I don’t think it worked. Yes, Eli Tomac was able to utilize the less optimal line and triple out of the corner. Eli Tomac is also a Daytona superhuman. For the 250SX riders especially, the outside line (on the exit) was a huge disadvantage. The 250SX class almost exclusively used one option and turned the track into a follow-the-leader trail. Like the whoop carnage earlier mentioned, I attribute this lack of adjustment to the different track crew. At races like Tampa, we saw the Dirt Wurx guys change the split lane section several times, hoping to find the perfect combination. I would have liked to see these sections tinkered with to even them out, building a better racetrack by the time the lights came on.

How the heck was Eli Tomac able to not only catch but pass Ken Roczen?!

Eli has this ability to go into another dimension when he finds his rhythm. We have seen this same level at Daytona in the past but also at Seattle and Salt Lake City in 2017. He is able to turn lap times that make the best riders in the world look lethargic. Tomac’s 1:10 lap times in the second half of the main event were nothing short of spectacular. He was getting in and out of the corners so unbelievably fast. When he is in that mode, there is no hesitation. His riding is purely instinctual and amazing to watch.

If Eli Tomac hadn't passed Justin Barcia when Barcia made a mistake, allowing Tomac an easy getaway, do you think Barcia could have engaged in another ET-Bam Bam battle that would have completely changed the results?

I think he would have tried but it’s hard to say how effective it would have been. When Barcia made the mistake, Tomac hadn’t really engaged the next level speed that he found later in the main event. It’s always a concern with Barcia and Tomac as we saw the same scenario at San Diego, for example. Barcia’s best weapon against Tomac is to fluster him and get him off his game. If it’s lap time for lap time, I don’t like Barcia’s chances on most days. If he can get into Eli’s head, though, he can muddy the waters and give himself a better chance.

Tomac’s rattled off five wins now this year. Is this title already Tomac’s and we don’t know it yet? And is he still your title pick?

No, I don’t think that’s fair at all. Tomac and Roczen have been back and forth all season. Tomac was more dominant in 2017 than he is now, and we all know how that turned out. He is my title pick but I think this is going to be a dogfight all the way to Utah.

Well, as we suspected, Pierce Brown struck back at Daytona after disappointing his team owners in Atlanta. That’s how fantasy goes, usually, a wild ebb and flow from week to week. I was hoping that Nick Gaines would continue to pay off after his strong showing in Atlanta was the whoop section caught him out, ending his night in spectacular fashion. Lorenzo Locurcio finally made good on a brutally tough 2020 campaign. He had not made a main event yet, but the Daytona sand was the perfect remedy for his ailing results.

The biggest disappointments were John Short, Kevin Moranz, and the aforementioned Nick Gaines. Their qualifying catastrophes crushed the hopes and dreams of their team owners. Conversely, John Short provides a great opportunity for huge points in Indianapolis this weekend. I don’t expect to see Gaines out there but that’s how fantasy works, timing is everything. It’s a brutal game with no way to predict when the swings will come your way.

For the 450s, Benny Bloss made his glorious return to the Rocky Mountain/WPS/KTM team, putting in his best result of the season along the way. His 38 points tied Henry Miller for the highest 450 scorer. Chad Reed utilized his legendary Daytona skills to rack up 36 points while Ryan Sipes put his KTM 350 SX-F into the main event, too, putting up a 34-point tally.

The most painful pick was undoubtedly Blake Baggett. His 4 points agonized the 51.9% of teams that chose him. I was in that same cage of pain leaving Atlanta, needing solid points and gaining poo to show for it. If he’s healthy for Indy, he will be an auto-pick. This fantasy game is a roller coaster of emotion. Good weeks and bad weeks are the bane of my existence. Atlanta’s fantasy disaster nearly killed me but I am back and ready for more. Bring on Indy!