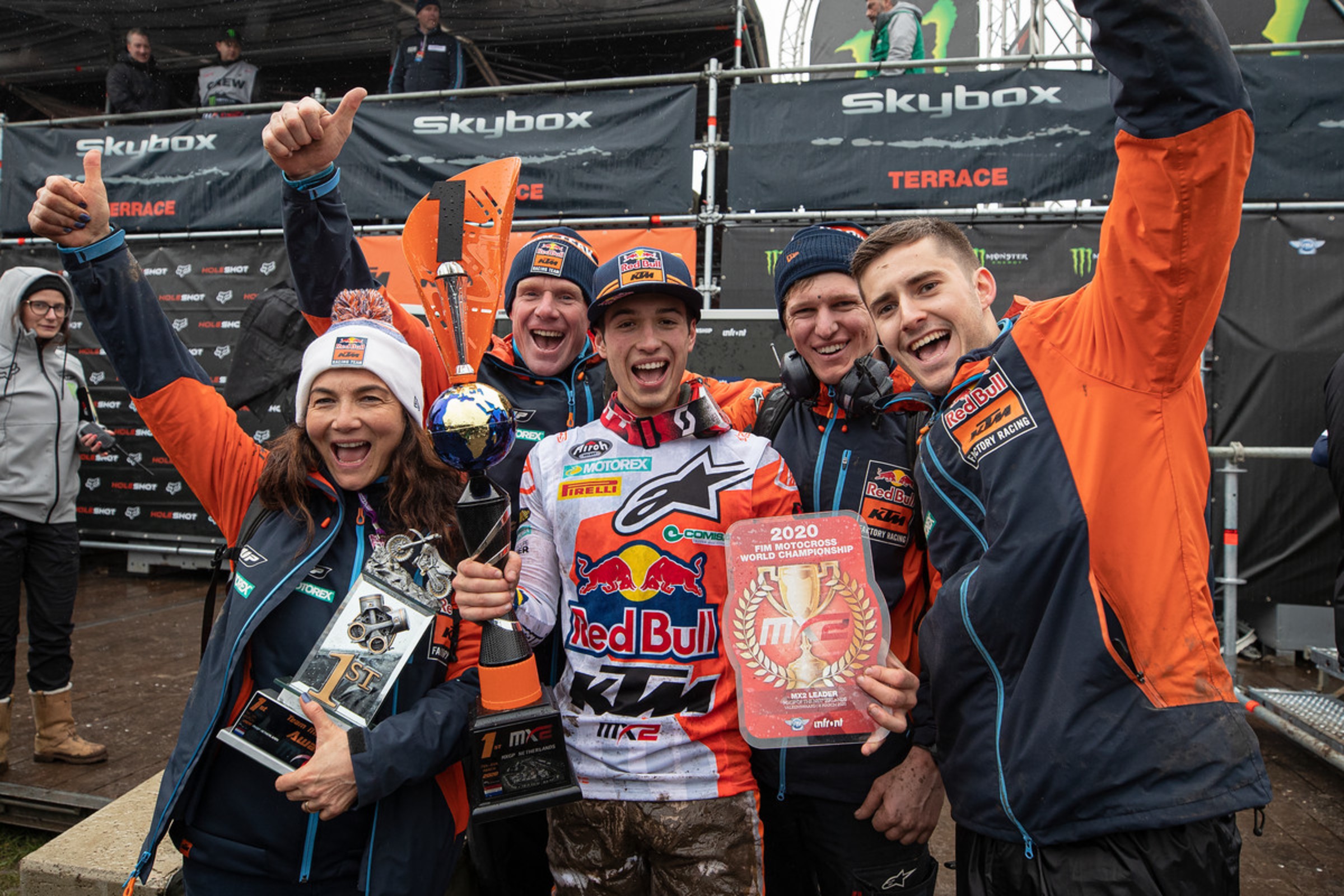 GP Report 3 Things Learned at the MXGP of the Netherlands

MXGP is still finding some of the grimmest aspects of European winter weather only days after the cold and stormy air of the British Grand Prix last week. Those brave souls that defied a chilly and rainy forecast at the Eurocircuit in Valkenswaard for the Dutch round and the second chapter of the 2020 season were rewarded with another Jeffrey Herlings home success, (his ninth from ten appearances in the last eleven years at the venue) and some unpredictable scenes as the world championship plight of attrition began early.

1. Orange glow as the duel progresses

Red Bull KTM ran out winners of both classes for the first time this season. While Herlings edged out the 2019 FIM Motocross World Champion Tim Gajser again (2-1 to the Slovenian’s 1-2) for his second Grand Prix win in a row and the 88th in total, Tom Vialle was celebrating just the second overall of his career in MX2.

For once Austrian superiority on the results sheets hid some of the full story. Gajser was particularly impressive in the sand. The Honda HRC man felt the downside of competing with a full prototype machine on Saturday when the CRF450RW apparently developed an electrical fault in the qualification heat and he went to the start gate almost last for the two motos. That he was able to get away from the soaking metal grill and through the bottleneck kink at Valkenswaard—one of the most exhilarating but also perilous opening sections on the calendar—said a lot for his prowess. Herlings had looked off-song until race day. Rockstar Energy Husqvarna Racing’s Arminas Jasikonis achieved the rare feat of being able to challenge Herlings’ speed and might in the sand on Saturday, when the terrain was drier, faster, and Herlings was complaining of arm-pump and a miscue with suspension settings. In the first moto on Sunday, Gajser was too pacey for the Dutchman who eased his KTM through the miserable conditions; again exercising his low-risk philosophy and approach to the season by deciding to chop the Grand Prix into halves and re-focus his efforts into the second outing, which he won at a canter.

Gajser was a clear second and Jasikonis came home third for his second career podium. The young Lithuanian is a curious case. He clearly has the physicality and commitment to trouble the front-runners at Grand Prix level but has been held back by his decision-making. He barely featured at Matterley Basin last week due to crashes and mistakes, but this showing was much improved by the rider that will need to deliver more in his second year in the IceOne set-up.

In MX2, Tom Vialle, the holeshot winner in both motos, was surrounded by Yamahas on the podium. Frenchman Maxime Renaux having banished a nervy Matterley appearance and Jago Geerts continuing to mix brilliance with baffling moments. The Belgian’s first moto win at Valkenswaard was a peerless display of fearless riding but he was lucky to stand up from a crash at the start of the second race and then begin an inspiring trawl through the pack to reach seventh by the chequered flag and make the overall ‘box’ with third. The feat was not enough to prevent the red plate transferring from the Monster Energy YZ250F to the front of Vialle’s KTM 250 SX-F for the first time in the Vialle’s career. Geerts also frustrated Rockstar Energy Husqvarna’s Jed Beaton; the Australian again denied a piece of silverware for the second Sunday in a row by the slimmest of margins. A worthy mention for rookie teenage German Simon Laengenfelder for taking the GasGas to fifth in the second moto and 2020 championship favourite, Thomas Kjer Olsen, continues to race back to fitness: the Dane’s seventh overall behind the British duo of Ben Watson and Conrad Mewse keeping him within distance of the top of the standings.

Famously called ‘an all-weather track’ the Eurocircuit was a daunting prospect thanks to the rainfall as Valkenswaard once again hosted the ‘Dutch’ round of MXGP (a label given to the temporary course at the TT Circuit Assen between 2015-2018). The climate caused the terrain to churn into a relentless onslaught of holes, bumps and ruts that was unforgiving to some of the most capable sand riders.

The Eurocircuit sand is a fascinating beast. In fine weather the surface can be almost hard-packed and fast but with help from mother nature can turn into a prospect that can rival Lommel for severity and demand.

Through either the track or their approach or own personal battles, MXGP is already starting to see wear-and-tear on some of the protagonists. Monster Energy Kawasaki’s Romain Febvre was a non-starter due to his knee injury, HRC’s Mitch Evans suffered a right shoulder dislocation on Saturday, Monster Energy Yamaha’s Arnaud Tonus is nursing a thumb problem. In 2020, the premier class counts on at least twenty riders in the gate with Grand Prix winning experience: how many can last past the halfway stage while at a reasonable rate of competitiveness?

The fortunate ones in Holland dodged some near misses. Glenn Coldenhoff (seventh overall) crashed in a collision in the first moto and again at the start of the second when Jorge Prado’s mistake instigated a pile-up and the Dutchman had two limbs trapped in the rear wheel of Clement Desalle’s Monster Energy Kawasaki. Prado himself was able to pick-up and ride to ninth, which was a better classification than his MXGP debut at Matterley Basin, still less than three months since he snapped his left femur.

“I’m grateful I’m alive, let’s say,” the Spaniard smiled afterwards, “and because I crashed on the side of my bad leg. It has been weak, so with another big impact it would have been worse.”

Gautier Paulin (eighth), a winner at Valkenswaard for two years in a row with two different brands, was another one scraping the sand from his glove palms while Rockstar Energy Husqvarna’s Pauls Jonass tumbled in both outings as did German rookie Henry Jacobi.

Others fell-foul of technical issues: Monster Energy Yamaha’s Jeremy Seewer having front brake issues and getting caught in the Prado melee and the less said about the Yamaha Gebben Van Venrooy situation then the better with both Alessandro Lupino and Calvin Vlaanderen abandoning motos and Thomas Covington still not near a state of race readiness.

While others struggled, some excelled. Jeremy Van Horebeek was the picture of steadiness on the SR Motoblouz Honda for fifth overall and Tony Cairoli—a seven-time winner at Valkenswaard since his first Grand Prix at the venue in 2004—nursed his weak right knee to fourth. “I wasn’t comfortable, and it wasn’t the best for a track where you need to attack. In the end we have to be happy even if this is not the result that we normally want,” the Red Bull KTM man said. Jasikonis kickstarted his season but in contrast to the vast resources of the IceOne set-up, Shaun Simpson guided his privateer SS24 KTM MXGP machine to fourth in the second race. The Scot won his first career moto at Valkenswaard in 2009 and all his three GP victories have come in the sand, but to run top-five speed against the might of the factories was utterly creditable. In fact, Simpson should have taken two fourth positions. A careless slip while chasing Prado in the first moto put the Brit out of the points and 10th in the overall classification.

MXGP is still in a weird stabilising phase. After the nerves and uncertainty of Matterley Basin the championship ventured into some of the most extreme conditions they’ll find throughout the rest of the eighteen-round calendar that, after April, enters a stride of three Grands Prix every month. There is still some inconsistency with form. In MX2, F&H Kawasaki’s Mikkel Haarup was a brilliant debut podium finisher in the UK but dropped to 15th overall in Holland. Red Bull KTM’s Rene Hofer was close to winning a moto in England but several mistakes in the second race (having secured a very decent fourth at the first attempt) meant the Austrian dangled in ninth. In the premier class, Jasikonis’ rise was unexpected and equalled for impact by Seewer’s adversity and plummet down the rankings to 19th.

The slither of upheaval extended off the track with the mire of travel restrictions impacting so many sports due to the spread of the COVID-19 virus. As expected, the Grand Prix of Trentino in northern Italy—round four—was postponed to July, and allegedly meetings took place in Holland with Infront Moto Racing to decide the fate of the Argentinean round due to occur in two weeks-time. At the time of writing the teams are still planning to freight the bikes and travel to Patagonia but the landscape seems to shift on a daily basis. Who’d be a sports promoter?! Compared to other world championships like MotoGP, WorldSBK and even F1 which have heavy Italian presence (and where the worst of the virus has struck outside of Asia, forcing the country to take drastic quarantine measures) MXGP is more northern-European centric. Even the Cairoli/Prado Rome-based faction of Red Bull KTM can be based from their Lommel workshop to facilitate travel to following fixtures.

If Argentina does fall then MXGP will join the rest of international sports to briefly stutter, which means a very busy summer ahead.