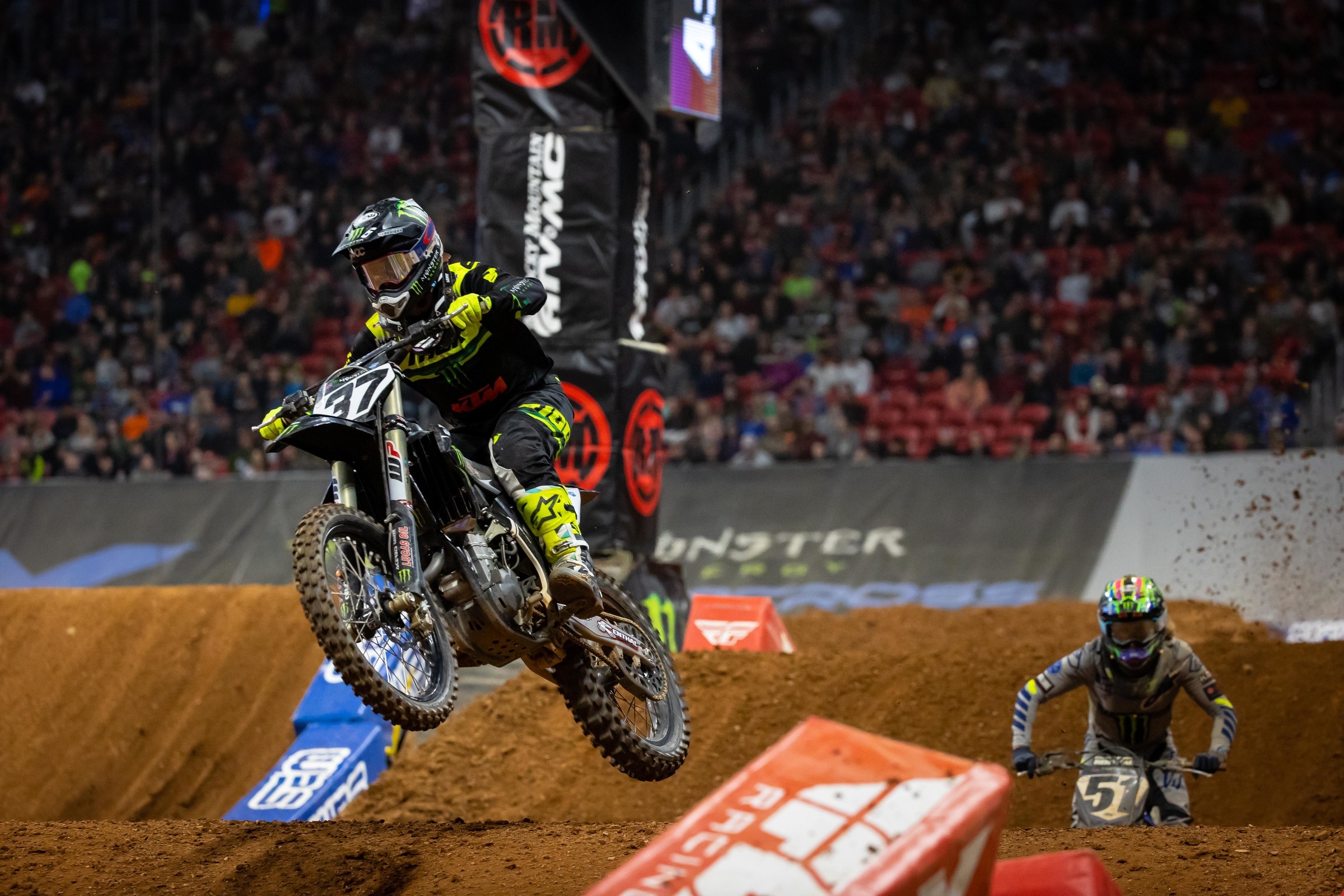 Martin Davalos checked off a lot of boxes Saturday night at the Atlanta supercross. He had his first solid performance in his new 450 supercross career, running second for most of the race. Justin Barcia got him late, but Marty still held a podium spot with a lap to go—the only problem is that Cooper Webb and Eli Tomac were all over him! With a few turns left, a determined Webb and Tomac busted the door down and pushed Marty back to fifth. That made it a great ride and a great night, but not quite the result he wanted after running top-three on every lap but the last one.

He accomplished a little more, too. A few weeks ago, Davalos and Justin Barcia got into a screaming match and near fight after a riding incident on…. press day! As Davalos walked into the Atlanta press conference, Barcia was walking out, so the two decided to hash it out and bury the beef right in front of everyone.

DMXS Radio’s David Izer and our Jason Weigandt talked to Davalos after the press conference.

Racer X: It’s good to clear the air with Barcia?
Martin Davalos: Yeah. He’s a great racer. He’s won a lot of races. He’s in the fight for the championship and you’ve got to respect that. But at the end of the day, I worry about myself. There’s so many good guys. It’s just impossible to name them. Tonight was a great night for me. I’m a little disappointed obviously because I was so close to the podium position. But man, from where I started, not much time on the bike, switching from Kawi to KTM. I think it’s been a huge step in the right direction. I think that we’ve developed a lot of speed and more comfort on the bike. I’ve struggled a lot with my starts throughout the season and tonight I proved myself. Good start puts you in a good position and opens up great opportunities. Today I think there was a lot of carnage behind me, but those nights you’ve got to take advantage of.

You know that I interviewed you your first podium here. What year was that?
It was in 2006, and it would have been my rookie season in Atlanta in 2006 on 250. If I would have podiumed, it would have been the same thing. It would have been full circle. It would have been so amazing. That would have been incredible. But like I said, obviously I’m upset because we all work so hard. Third place would have been incredible. But at the end of the day, I didn’t wash the front end. I was able to keep it on two wheels. I’ve wanted to be up there for so long. Last weekend I crashed every single main event, but I showed a lot of speed. Today just came to the race, we sat down. Let’s just stay on two wheels. Let’s just ride strong on the bike. I think those guys have a little more fitness, more experience to run. I used to do fifteen laps. Now we’re doing 25 laps. So it’s a huge, huge thing that you can only get that experience when you do it at a race pace. You cannot simulate that at home.

You’ve always been a positive, glass half full guy. It’s helped your career last this long. Like you said, you didn’t make a mistake, it was more like there was all that speed coming behind you. It was like a wave of riders coming behind you. But there’s a lot of positives from tonight.
Definitely a lot of positives. I struggled a lot at the beginning of the day with the bike. I was not feeling comfortable. The track was a little awkward. A lot of 90 degree turns. I didn’t feel like I had a good flow. Team Tedder and WP, we sat down. We changed a lot of things. They got me a lot comfortable. The start really helped a lot. The sand section was kind of tricky too. A lot of roost. You were taking a lot of roost every single lap. But I’ve always been positive throughout my career. There’s been a lot of negative talk about me on the 250 class, but it’s been something that at the end of the day we all want to make a living. This year I’ve been wanting to move up to the 450 for the past five years. This year the opportunity came up. I didn’t want to retire without this. I’m so proud. My son, five months old, came to watch me for the first time in Atlanta. I had my whole family here. I’m super, super pumped.

All the negativity you’ve heard, but you’re still racing dirt bikes for a living and here you are fighting for podiums in the premier class.
Yeah. At the end of the day, I think that’s what fans thrive off. It happens in other sports. I think us as athletes, it makes us better to turn it into a positive. A lot of people, you have fans or people don’t like you. The only thing I can do is just worry about myself, worry about my outcome, what I want to do in life, and the rest I think it will play itself.

You spent a lot of the race kind of by yourself there in second. There wasn’t much pressure for a while. What runs through your mind at that point? I’m sure you were thinking someone eventually was going to get here and challenge you. What do you think about to try to stay focused?
I didn’t look back because I’ve learned throughout my whole years don’t look back. [I was trying to] Look at Kenny. Kenny was at another level. I think it would have been hard to catch him even if those guys started with him. He was just riding so good. The way I’m looking at this race is trying to stay near him a little bit and not think about what was going on behind me. Whatever you can do to stay close to Kenny. Obviously he got [way from] me. I was by myself. I had some pressure from some Honda guys, and I don't know who else. But I felt like they weren't really coming at me, showing the wheel. I just told myself ride strong, ride this pace. If they’re going to come, they’re going to be pushing it a little more than me. So I think I was smart. I think the track was really difficult. It was hard to charge and be aggressive. There was a lot of carnage behind me. So obviously a good start really definitely helped me.

Everybody is saying how the track was slick in some spots, soft in others. It was a track where the mistake could have come very easily. The sand section got super rough. There was a huge bump coming out of the sand. It was really slick into the triple. So there was a lot of opportunities for a lot of mistakes. I’m sure a lot of the riders said by the mechanics’ area was super slick. You’re finding traction but then you’re trying to set up your bike a little softer to get more traction but then you’re running into a lot of G-outs and ruts in the transitions. It was definitely a challenging track. A lot of 90’s [degree turns] and coming out of the tunnel was really awkward too. We just made it work. I think the best nights is when you overcome the struggle throughout the whole day. I feel like we did that today.

Obviously you’re doing twenty-minute motos at home, I’m sure, but how different did you feel physically or even mentally fifteen minutes into the race compared to a moto at home?
It’s totally different. I think it’s more mentally. There’s so much going on and there’s so much pressure. I think I looked at the clock with three minutes to go, and my mechanic told me two laps to go, three laps to go. I think it’s just mentally a little more exhausting. Over there you’re just kind of more in the zone, a little more relaxed. Here you just have so much pressure coming from everywhere. You know that somebody is going to come at you. So I think physically to be honest with you, I did tighten up a little bit but physically heart-rate wise I think I was really good. We’ve put a really good off-season. We did the race in Geneva. That helped me a lot. I think getting a little more comfortable with the bike and I think starts. This class being so deep with so many champions, if you don’t get in the top five out there trying to battle with them, it’s hard to catch up.

The last lap I feel you did everything right. You managed to get inside before the tunnel. I thought Cooper was going to get you there. You managed to hold him off through that sweeping first turn. You even went inside in the turn he passed you, but he still managed to get you. I feel like you did it right.
I did it right, just Cooper is very good! He’s done it to a lot of people. He’s a very smart rider, very clever. I protected my line and he just took advantage of his cleverness. I think it was a great pass. He stuffed me and Eli kind of got by me. Three laps to go I had a lapper that didn’t jump that rhythm section and I had to go double, double, double. I think that’s my three-tenths of half a second that I needed to really seal the deal. But at the end of the day, I’m bummed. I’m disappointed. That would have been a huge, huge accomplishment for my career. But I’m very proud of how far we’ve come.

Compared to even just last week, you’ve got to be walking out of here happy.
Yeah, definitely. I’m walking out of here stoked. Team Tedder and everybody, they work hard and they believe in me. That’s why they’ve given me the opportunity. I was super pumped. Everybody’s happy in the team. Obviously everybody would have wished that I would have podiumed. That would have been a huge thing. But at the end of the day, going from 15th, 11th, 16th, to 5th, the goal tonight is just get in the top ten and we came back with a 5th.