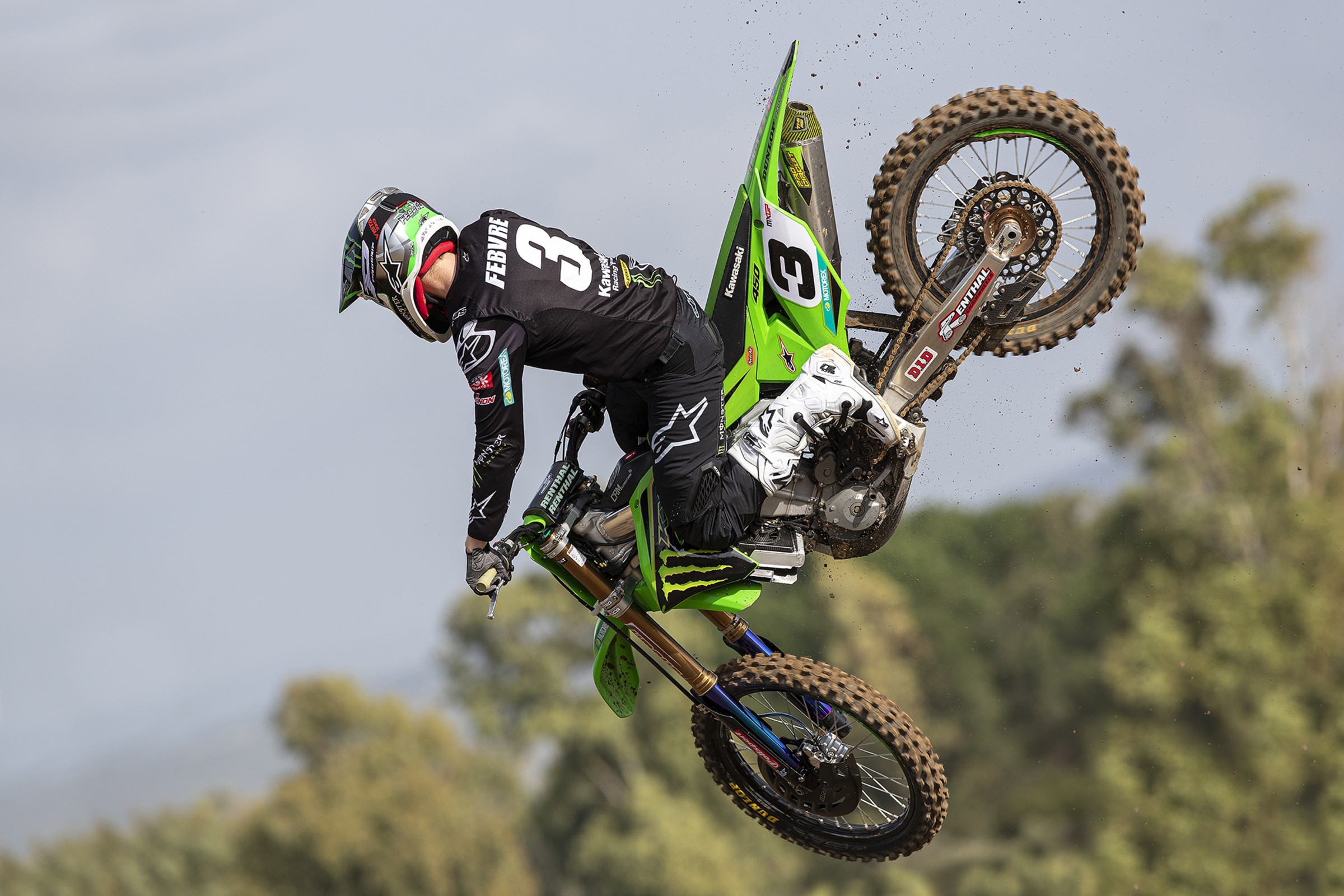 This weekend in Great Britain, the 2020 FIM World Motocross Championship will drop its first gate of the season. With all the silly season talk behind us, we thought it would be a good idea to preview where the big names are amongst the big teams in the paddock for both classes this year. Sunday will mark the first of a 20-round championship that will visit 17 different countries and wrap up in late September. Let’s take a look at who will be heading to the line for the 2020 season.

Tim Gajser comes into this year looking to defend his second MXGP world title, but oddly may not be favored. Gajser raced the Monster Energy Cup last October and has been quietly putting in the work to be prepared for the return of a healthy Jeffrey Herlings and Antonio Cairoli. He (as well as teammate Mitchell Evans) will pilot a brand-new Honda CRF450RW that will not be in production until next year.

Evans was a standout in MX2 last year before being injured mid-season. The Factory Honda squad moved on from Brian Bogers in the offseason and picked up the young Australian after just one year in MX2. Evans has already impressed in some preseason races but will be making his 450 debut this weekend.

Herlings missed a ton of 2019 with injury but still managed to win four motos in just nine gate drops taken. The 2018 champion is widely regarded as the favorite coming in but will need to stay away from injury which has been tough for him over the years. This morning, the team announced an agreement that will keep Herlings on the team through the 2023 MXGP season.

The nine-time world champion is back at it again for his 12th season in the MXGP class. The 34-year-old Italian seemed to be aging like fine wine until a crash in Latvia ended his season with a shoulder injury. Cairoli has long sought-after tying Stefan Everts record of 10 world titles and will give it another go this year.

Somehow, some way, Prado will be lining up for his MXGP class debut this weekend just over two months removed from a broken femur. The two-time MX2 World Champion will have a lot of hype behind him this season but will start slow as he’s only just got back on the bike a few weeks ago.

Seewer had a terrific season last year but finished over 200 points behind Gajser and never won a GP, much less a moto. He’ll be looking to finally stand on the top step this season while also pursuing the world title.

The veteran Frenchman had an up and down 2019 in what was his first year with the Wilvo Yamaha team. Now that the team has become the full factory effort, Paulin will be working to find his winning pace from a few years ago.

Tonus hit the podium five weeks in a round in the middle of last year but trailed off a bit towards the end. He’s completely turned his career around since going back to Europe and will look for that elusive first career win this season.

The 2015 World Champion was injured at the opener last year but would come back halfway through the season and even score a victory in Czechia. He has now left Yamaha after five years with the team and joins the French-based Kawasaki team while also switching to a new number. No, that’s not Eli Tomac out there people.

Desalle was injured in Russia last year and missed the remainder of the season. He’ll be looking to get through the year healthy.

Coldenhoff entered 2019 injured but then put together the best year of his career. He finished on the podium five consecutive times and won two GP’s to finish off the season before winning his class and the overall at the 2019 Motocross of Nations. He stays with the same team but the rebranded Factory GasGas outfit brings extra resources to the team.

Monticelli stays with the team for a second year. The Italian has hot and cold strings but may be boosted by being part of a factory effort this season.

The likeable Lithuanian stands 6’5” and man-handles a bike around like Ken De Dycker. Jasikonis was very consistent in 2019 but only recorded a season-best moto finish of third.

The 2017 MX2 World Champion had an up and down rookie year last year. He’s shown that he has potential to be a player in this class and will look to make that the trend for the entire season.

The Jerryman nearly retired from racing in 2018 when his Yamaha contract ended but he has revitalized his career with the small French team.

Once the fastest Swiss rider in the world, Guillod only raced the MXGP of Germany last year. He’s back on the gate to give it a full go this year.

It's an MXGP debut weekend for the South African… err… Dutchman. Vlaanderen is a proven winner in MX2 and left 2019 on a high with the Motocross of Nations title.

Covington returns to the GP scene after a forgettable year in the USA. He’ll look to reinvent his career while making his MXGP class debut simultaneously.

Lupino stays with Gebben but obviously switches brands with the team as well. He'll be a consistent points scorer this season.

Lieber moves on from Factory Kawasaki and joins Jacky Martens new Honda team. Lieber was a consistent top-ten guy before getting injured halfway through last year.

Strijbos will race with the KSRTMX Hens team this year.

Simpson put together his own effort: SS24 KTM MXGP.

Jacobi signed with the Yamaha SM Action/McMiglior J1Racing team in November and will debut in the MXGP class this weekend.

Bogers competed with Honda HRC in 2019 but will compete with the Marchetti Racing Team KTM in 2020.

Sterry signed with the JD Gunnex KTM Racing team and will make his MXGP class debut this weekend.

Vialle is now the lead man on the MX2 KTM squad, and with that comes the expectation of championship. He was impressive in his rookie season last year, but the team will lean heavily on him this year to produce. He enters as one of the favorites for the title.

Hofer spent most of last year racing the EMX250 class where finished fourth. Now he moves to the factory KTM squad in MX2 and will be asked to do much the same as what Vialle accomplished a year ago.

With Prado gone, Olsen moves to the number one spot in the power rankings. The Dane has more wins in this class than anyone else on the gate but has been inconsistent at times over the years. He should be the clear favorite on paper, but we'll see once the gate drops.

Beaton spend a lot of last year dealing with nagging injuries that kept him from his full potential. He’s looked good in preseason races and seems to be coming into the season with much more steam than last year.

Expected to contend for a title this year but still has yet to win a GP. We’ll see how fast he knocks that first win out of the way.

Watson spent the second half of the year injured. He made a brief comeback late in the year before being injured again and pulling him out of the rest of the year. He too will be looking for his first career win this year and to be a title contender.

Haarup jumped back and forth between MX2 and EMX250 last year while also jugging being healthy or injured. He leaves Rockstar Energy Husqvarna to give MX2 a full go with Kawasaki.

There is a lot of hype around this young Dutchman, and for good reason. In just his fourth career MX2 moto late last year, he finished third behind the Factory KTM duo of Prado and Vialle. Look for him to turn some heads this year.

Boisrame had a bit of an issue putting two motos together for most of last year but began to figure it out late in the season. He’ll try to continue that upward trend into 2020.

Once a Suzuki prodigy, Vaessen had a so-so 2019 going before injury pulled him from the series with six rounds to go.

Mewse only raced four GP’s last year before pulling out with injury.

Rubini narrowly missed out on the EMX250 crown last year and moves up to MX2 full time this season.

Ostlund returns to the MX2 class for what will be his final year of eligibility.

The outgoing Mitchell Evans from the team brings in another young Australian who will make his debut this weekend.

Another young Australian making his debut this weekend.

The 125 champion will be jumping right into the MX2 ranks this season to give it a go.

He rode great in the few MX2 rides he did last year. And he has a sweet mustache.

Harrison will compete with Bud Racing Kawasaki in 2020.

Todd raced the early rounds of the 2019 Lucas Oil AMA Pro Motocross Championship and will give the MX2 class a go in 2020 with the DRT Kawasaki team.

Horgmo will compete with Marchetti Racing Team KTM in 2020.

Renaux will return to the Yamaha SM Action/McMiglior J1Racing team in 2020.