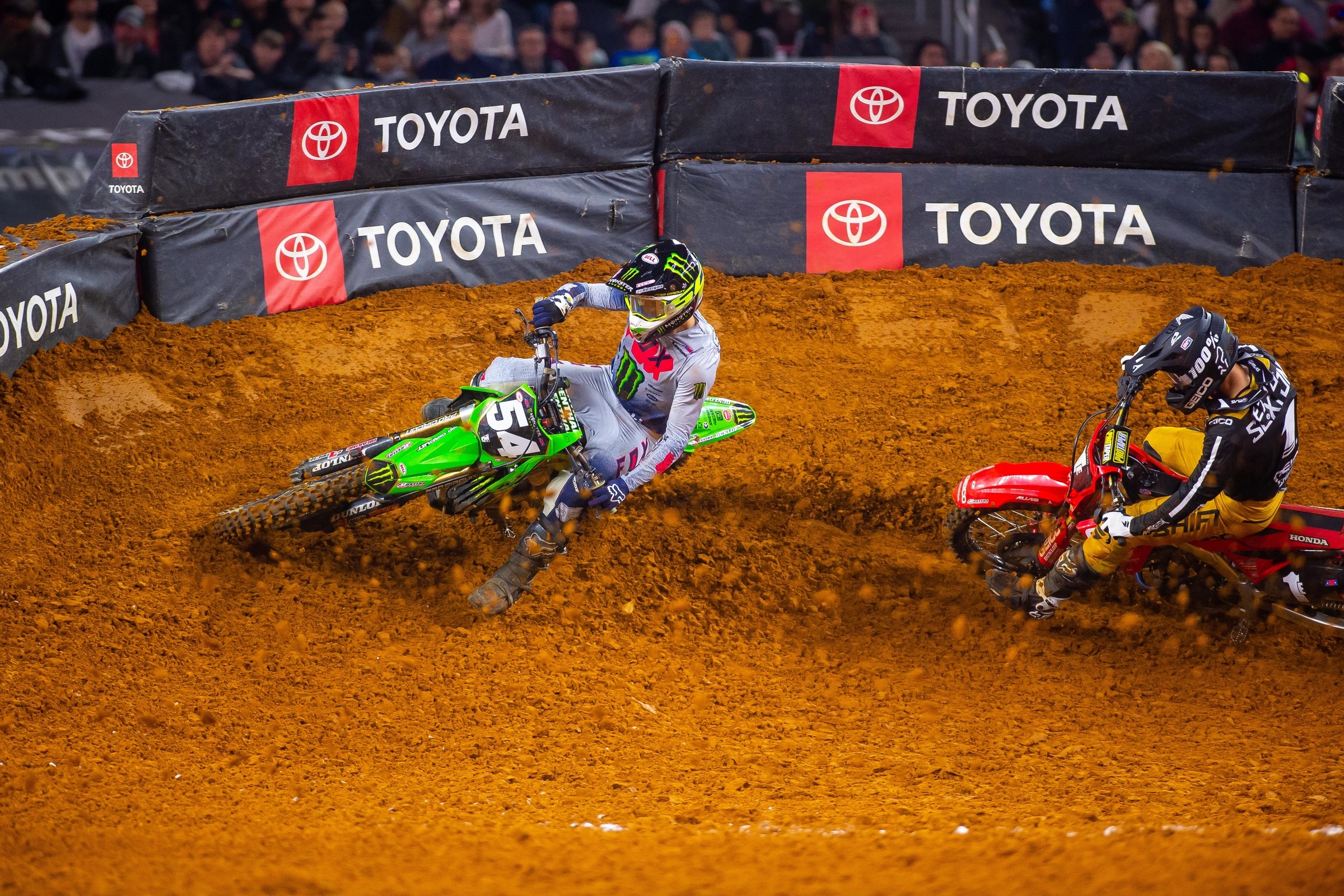 The good news for Justin Barcia is that after the last few races there’s little doubt left of his ability to charge hard through the current pack. The bad news is, he’s been forced to do just that, as his starts simply haven’t been good. That doesn’t bode well for his prospect of winning again this season, as running up front is just about impossible if you don’t get a good start. If Barcia can get a good start in Atlanta it’ll be interesting to see how it plays out. If he can’t, expect him to be battling through the pack yet again. –Aaron Hansel

With a win and a runner-up earned by both Shane McElrath and Chase Sexton in the first two rounds, the two are deadlocked at 49 points each heading into Atlanta. That means both riders will be sporting the red backgrounds this Saturday night, but only one will have it afterward. Which one of these riders will be closer to the championship after Atlanta in what is almost certainly the final year in the 250SX Class for both? –Hansel

If you’re Joey Crown, you’ve got to be pumped on how the year is going so far. The 250SX East rider was eighth at the opener and improved to seventh overall last week in Arlington, and now sits sixth in points. That’s not too shabby for anyone, but before 2020 Crown had never even qualified for a supercross main event at all. That’s a huge leap forward! Crown’s obviously found something that’s working for him—we’ll see if it keeps working in Atlanta. –Hansel

If you’re the type who gets excited over rookie debuts, then you won’t want to miss the action in Atlanta this weekend. Troy Lee Designs/Red Bull KTM’s Pierce Brown will be making his professional supercross debut this Saturday after a shoulder injury suffered in December resulted in Brown missing the first two 250SX East rounds. We’ll see how Brown does when the gate drops on his professional SX career in Atlanta. –Hansel

It’s been said defending a title can be even harder than winning the first one, and so far for Cooper Webb that’s been true in 2020. Things got a lot tougher last week too when Webb crashed hard, flipped, and landed square on his back on the unforgiving concrete floor. That was it for Webb on the night, but fortunately he was able to escape without any serious injuries. Don’t think he won’t be feeling the pain this weekend though—Webb took an absolute beating in Arlington. With Tomac on a roll and in possession of the red plate, Webb is going to have to ride through some serious pain in Atlanta if he wants to keep his championship hopes alive. –Hansel

There is another sand section smack dab in the middle of a supercross track this weekend in Atlanta, and like the 2017 Atlanta track, it’s in a spot that most riders will dread; right after a wall jump. This combo is basically asking for riders to be eating sand from riders ahead of them checking up to downside the back of the wall and landing wide open to absolutely blast whoever is behind them. It won’t be something that will hinder the guys too much, but it will be an annoying piece that we’re sure to hear riders voicing their dislike for come late Saturday night. –Kellen Brauer

It’s In the Past

Jordon Smith fell four times in last week’s Triple Crown in Arlington, Texas. The Monster Energy/Pro Circuit Kawasaki rider now sits 21 points back of the championship lead after just two rounds. Smith has contended for this title before and is likely frustrated with the way his season has started. As the veteran rider under the tent over there, he’d like to erase a weekend full of unfortunate circumstances and show that he still has a fighting chance to make a run for this title. Look for him to be extra frisky in Atlanta from the first green flag in free practice until the final checkered flag in the main event. –Brauer

Honda HRC’s Justin Brayton found himself in the soil far too often a week ago, a situation we’re not accustomed to from the savvy veteran. Looking back to 2018, Brayton took a race win at the Triple Crown in Atlanta before winning his first career supercross main event at Daytona the next week. Although it’s a regular format race this year, these next two races could bring an extra boost of confidence for JB just when he needs it. Look for a more measured performance for the Iowan this week, especially now that he needn’t worry about his daughter competing in a Stacyc race right in the middle of two main events. –Brauer

We won’t be seeing red just because we’re invading the home of the Atlanta Falcons, but rather we’ll be seeing red on the track as well. Even though the series moved about 700 feet to the south when the Georgia Dome was demolished and the new Mercedes-Benz Stadium opened, the dirt did not change. That classic Georgia red clay will still be what the track is mostly built with this week and it can present a unique challenge. The dirt will break down but stay sticky in a sense, which can cause some unique ruts and bumps to form. The track layout does not appear to be overly technical, but there still could be some minor settings adjustments for these guys to be completely dialed in come the night show. –Brauer

Every year, it feels like the build up for the supercross season lasts forever and then suddenly we’re in Atlanta wondering where eight rounds went, right? Either way, this round marks the true halfway point of the season as we’ll only have eight rounds of the championship left after this ninth round this weekend. Though some may say the championship doesn’t start until Daytona, the reality is the championship leader by Daytona often will go on to win the title. Only two guys could leave Atlanta with the red plate and neither have won the supercross championship before. Now that we’re headed to the back half of the season, this could be a round where that “statement ride” is made. –Brauer