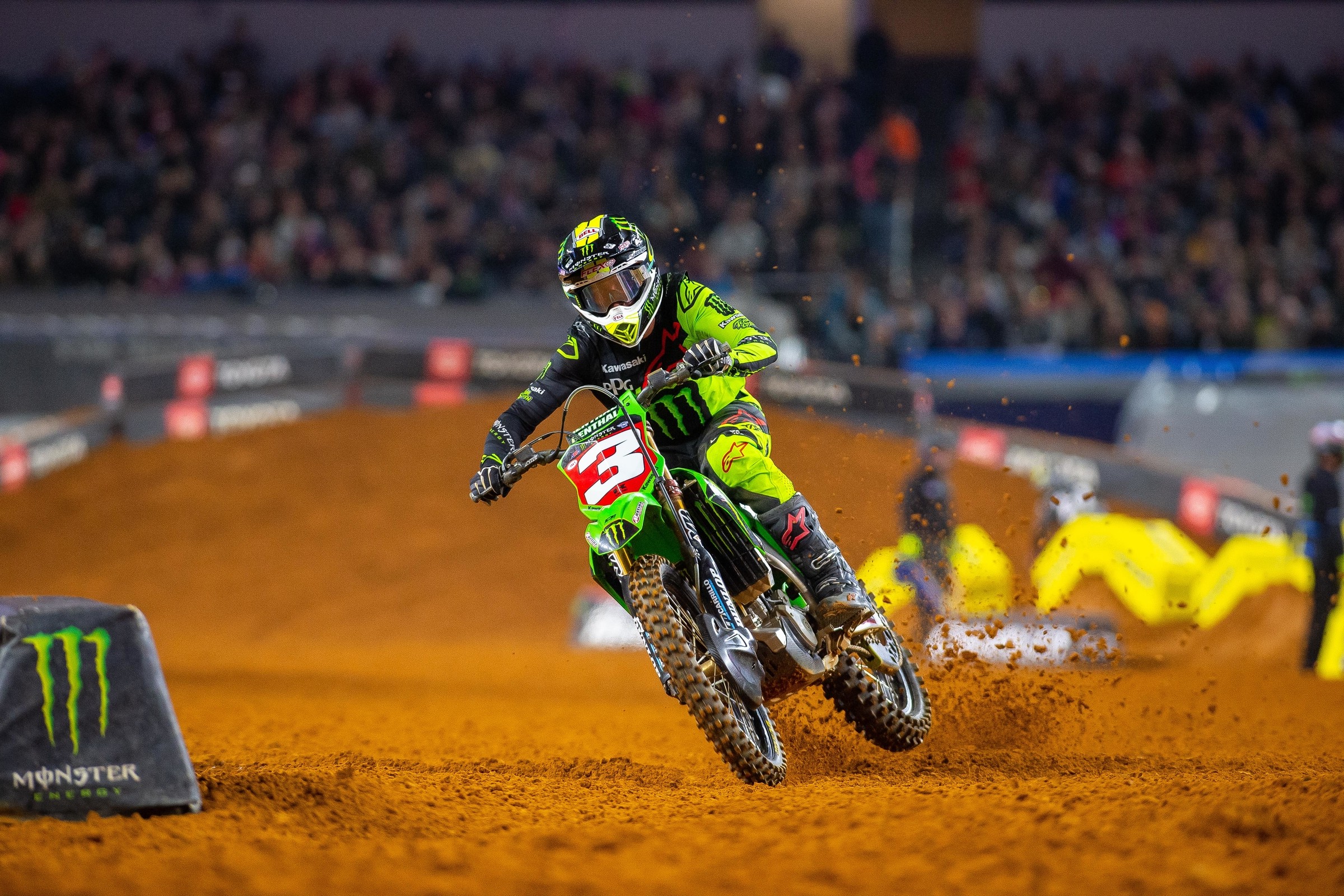 For the first time ever, Eli Tomac came into a Monster Energy AMA Supercross race in sole possession of the red plate, and then won that race. Just like that, some of the demons of yesteryear have been chased away, a message that rings extra clear on a night like in Arlington, where crashes and mistakes spilled out all over the place.

“It’s just nice to get through this one,” said Tomac, first addressing the chaos of the evening, before then turning to his grip on the red plate. “But, that being said, this year, I just feel like I’m in a better place. Where before, I felt almost like I was a little nervous in that situation, and that led to goofy mistakes.”

There. The first step to a solution is admitting the problem, right?

This weekend provides a stark contrast in that Tomac, often the “so fast but then the mistake” guy ended up winning what was easily the most chaotic night of the season. The Arlington race offered such diverse challenges, mixing some tricky obstacles, dirt, and the Triple Crown format. Whatever the reason was, there were crashes all over the place, including one that eliminated Tomac’s teammate Adam Cianciarulo (broken collarbone) and another that coulda’ shoulda’ woulda’ done the same to Cooper Webb. Somehow, Webb seems to have escaped only bruised but not broken.

This morning, though, our man Jason Thomas pointed out an interesting factoid with Tomac:

I will make a prediction: if Tomac successfully gets through Atlanta and Daytona, extending his lead to double digits, this thing is over. Historically, Tomac has been incredibly strong in April. If he stretches this lead to 12-15+, it’s done.

Hard to believe the early season has yielded to mid-season so quickly, but indeed we’re at the halfway point by this weekend in Atlanta. While the old saying is that the series begins at Daytona, it more often than not is over by Daytona. If Tomac avoids trouble in these next two races (and he’s traditionally lethal at Daytona), a very blurry title picture can snap into focus. Of course, we’re still talking about Tomac, who has suddenly lost control far too often. You just know he can’t truly relax until he’s actually holding the plate, no matter how big a lead he has, and no matter what history says. He has to deal with a different sort of history—his own.

Last week we mentioned that deep field right behind the Tomac/Roczen/Webb group, and while crashes did dot the evening in Texas, strength remains. Justin Hill continues to climb, logging fastest in both timed qualifying sessions, and then taking the next step in the night show. He used his top gate pick to line up outside of starter’s box (this is classic Alessi thinking, team manager Tony in action) and get a good start. He was fourth and passed Jason Anderson in the whoops for third. It would have been interesting to see what Hill could do with Roczen and Webb just ahead, but then Anderson knocked him down on the first lap.

He returned for third in the second race, then crashed on the first lap of race three, charging from last to eighth. Hill is definitely putting the puzzle pieces together.

Justin Barcia continues with the same story—good speed, lots of fight, bad starts. It was good to see Jason Anderson back up front after a few bad weeks, and Zach Osborne’s night was definitely progress. On a rough night in Texas, most of the #deepfield survived, so the potential for mixed up nights and bigger points swings remains. Still, Tomac was steady while others were up and down. That’s the kind of story Eli has been trying to write for a long time.