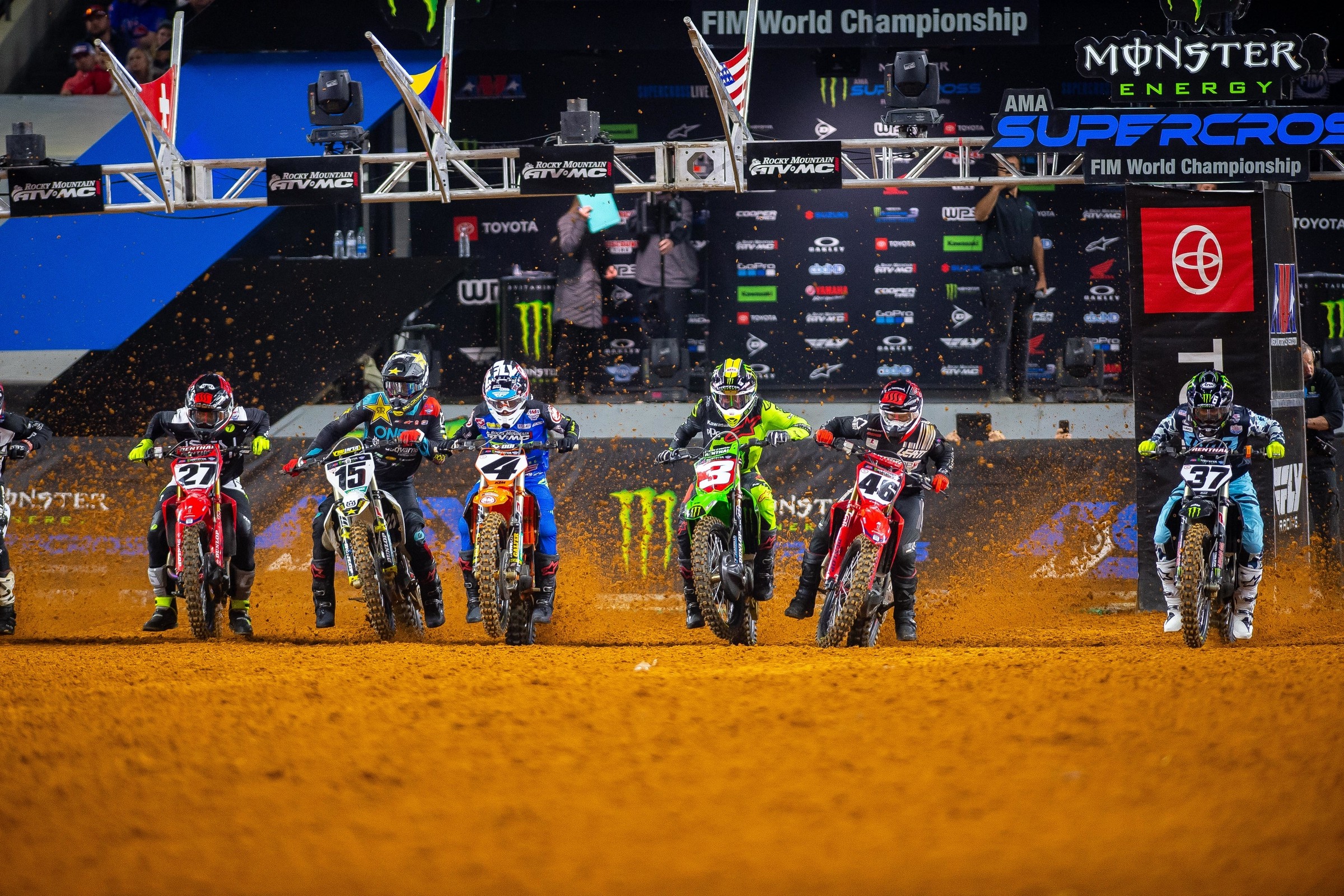 We’re once again firing off questions at long-time pro Jason Thomas for some opinions on round eight of the 2020 Monster Energy AMA Supercross Championship.

Ken Roczen and Eli Tomac commented on the dragon's back that led to Cooper Webb and Adam Cianciarulo's undoing. They said the final whoop was smaller than the whoop before it—which they say is not the right way to build it. Explain hitting a dragon's back and how it's supposed to work.

Ideally, all of the whoops would be the same size, climbing at the same rate. That allows riders to blitz consistently up and off without worry of missing one. What Roczen and Tomac are referring to is exactly that. When one of the whoops is smaller, particularly the last one, it’s very easy for the front wheel to miss it. That miss results in the front end dropping because it didn’t impact the next whoop. That lack of impact, especially when the rider expects the front wheel to remain flat or up, is worst case scenario. It completely disrupts the flat plane that riders want to maintain. The front wheel drops over the edge of the backside of the entire dragon’s back, surprising the rider and correspondingly, the rear comes up (if the front drops, the rear is going to rise, as it’s all connected).

More importantly, this particular dragon’s back forced riders to exert a level of caution. The penalty for a mistake was severe, especially at high speed. Justin Brayton, Cianciarulo, and Webb all had huge crashes from exactly this same scenario. They blitzed off, got a tiny bit careless on their front wheel location, and nosed into the landing and triple takeoff that followed.

Another factor of this particular dragon’s back was the distance to the landing. This distance was a little further than we sometimes see. The distance is critical because in an endo situation (all three crashes), because the further the rider has to travel, the worse the endo becomes. If the landing was closer, the chances of crashing would have diminished. Even if the front end was dropping, the front wheel might still have landed on the downside instead of plowing into the face of the next jump. It may not have saved all three of them, but it certainly could have lessened the severity of their crashes. You can watch Webb’s crash to see how it all unfolded—the endo started it, but catching his wheel on the next jump ended any chance of saving it.

Hoping the best for @CooperWebb2 after this brutal get off ? #SupercrossLIVE

The whoops were long. Where they tough? What was the key there?

They were long and tough. The length was definitely the toughest part because a small problem usually became a big problem by the end of the whoops section. In a shorter set of whoops, riders can usually escape the section before things escalate to a serious level. On a set that long, riders knew they were operating without the safety net that is the end of the whoops.

The other difficulty is in the deterioration of the whoops. The dirt was somewhat soft allowing the whoops to break down each time riders came around to make another run. The fastest approach in the first main events was to blitz, but that slowly devolved into jumping whatever rhythm came easiest. The timing for when to abandon the blitz and go to the jump was an interesting dynamic. Not everyone decided to switch at the same time and some paid the price for not getting the memo. Martin Davalos, for instance, tried to blitz late into the final main event and ended up crashing big. To be fair, though, Marty crashed several times in several different spots throughout the night.

Eli finally followed a weekend where he grabbed the red backgrounds with another win. Also, a significant title rival, Webb, took a hit. Dare we even start talking about this?

What are we daring to do? Talk about Eli’s title chances?

Well, I don’t think it’s ever too early to do that. Tomac has been in contention for the title every season (maybe exclude 2018 with the shoulder injury) so it’s always going to be a relevant topic. He was my championship pick before the season (as well as Steve Matthes and Jason Weigandt’s too) so this is kind of what we expected to see. With Webb wounded and Tomac getting the best of Roczen lately, maybe this will finally be his year.

I will make a prediction: if Tomac successfully gets through Atlanta and Daytona, extending his lead to double digits, this thing is over. Historically, Tomac has been incredibly strong in April. If he stretches this lead to 12-15+, it’s done. By the way, he’s usually really fast at Daytona. Things are definitely trending his direction right now.

What made the corner after the finish tough? Seemed obvious not to go wide enough to leave the door open, but it happened over and over. Was it hard to get stopped and slowed?

The turn was mostly flat which always makes it difficult to get stopped and turn. But more importantly, the turn offered a bit of pick-your-poison mentality. Riders had to guard the inside to prevent a block pass or worse. However, the next rhythm section encouraged riders to swing wide, to get the momentum to go 3-3 into the corner. Hug the inside and you were susceptible to being jumped past in the next section. Swing wide to jump the fastest option and the door was wide open for an aggressive pass to the inside. The lead rider had to assess the situation each lap in mid-air, deciding if there was enough room to go wide or if the gap was tight, protect the inside and hope to hold it through the next rhythm.

Seemed like Roczen had a sneaky line in the five-pack of jumps after the standard supercross triple. Tomac was experimenting in the long rhythm next to the whoops. Did you see anything there?

The rhythm you referred to with Roczen changed several times throughout the night. The fastest line was to go outside for a triple-double. That outside line got too deep and rough to maintain, forcing riders to choose a slower inside line. That inside line was still up for interpretation as riders could double in, blitz across the next small jump and then double, or roll the first one and double-double. That first choice became very quick as the third jump in the section became so small that riders didn’t have to respect it at all. They could accelerate through it, turning five jumps into virtually four.

In the next section, Tomac and Davalos were pulling a huge line early in the night. They would triple out of the turn, then triple onto a tabletop, then step off that, and then triple into the corner. It was the fastest line but also required precision. Each time they hit the outside rut, it became tougher to do, too. Over time, they both resorted to the standard line but for a few beautiful laps, they had that section dialed.

Does Shane McElrath still have the speed edge or did Chase Sexton show what he needed to show?

I think the speed was fairly even Saturday night. Sexton had the whoops dialed but we won’t see whoops like that every week. More importantly, McElrath botched two of the three starts, forcing him to fight through the field. Sexton’s starts were more consistent, putting him in a much better position to succeed. Even with RJ Hampshire helping him to the ground, Sexton’s speed and whoop prowess brought him back to the front. Sexton is the real deal and for those who left Tampa thinking this was going to be a McElrath runaway, I think last night was a good indicator of the impending war.

Hampshire said he owed Sexton a takeout from last year. Sexton immediately knew he meant from Millville. Just talk about riders keeping score like this.

As they say, revenge is a dish best served cold. I believe that most hard feelings dissipate over time, though. I can remember being so mad over a pass or take-out, swearing vengeance with a fist shaken at the sky. A couple of months later, though, I didn’t really care anymore. If I did get my chance to repay the favor, I would avoid it because I was more concerned with getting a good result that day. Events like this usually get sorted out within a week or two or not at all. This six-month payback is unique, for sure.

Any freaking advice for the JGRMX guys? Take the rest of the 2020 budget and throw it all down on the roulette wheel?