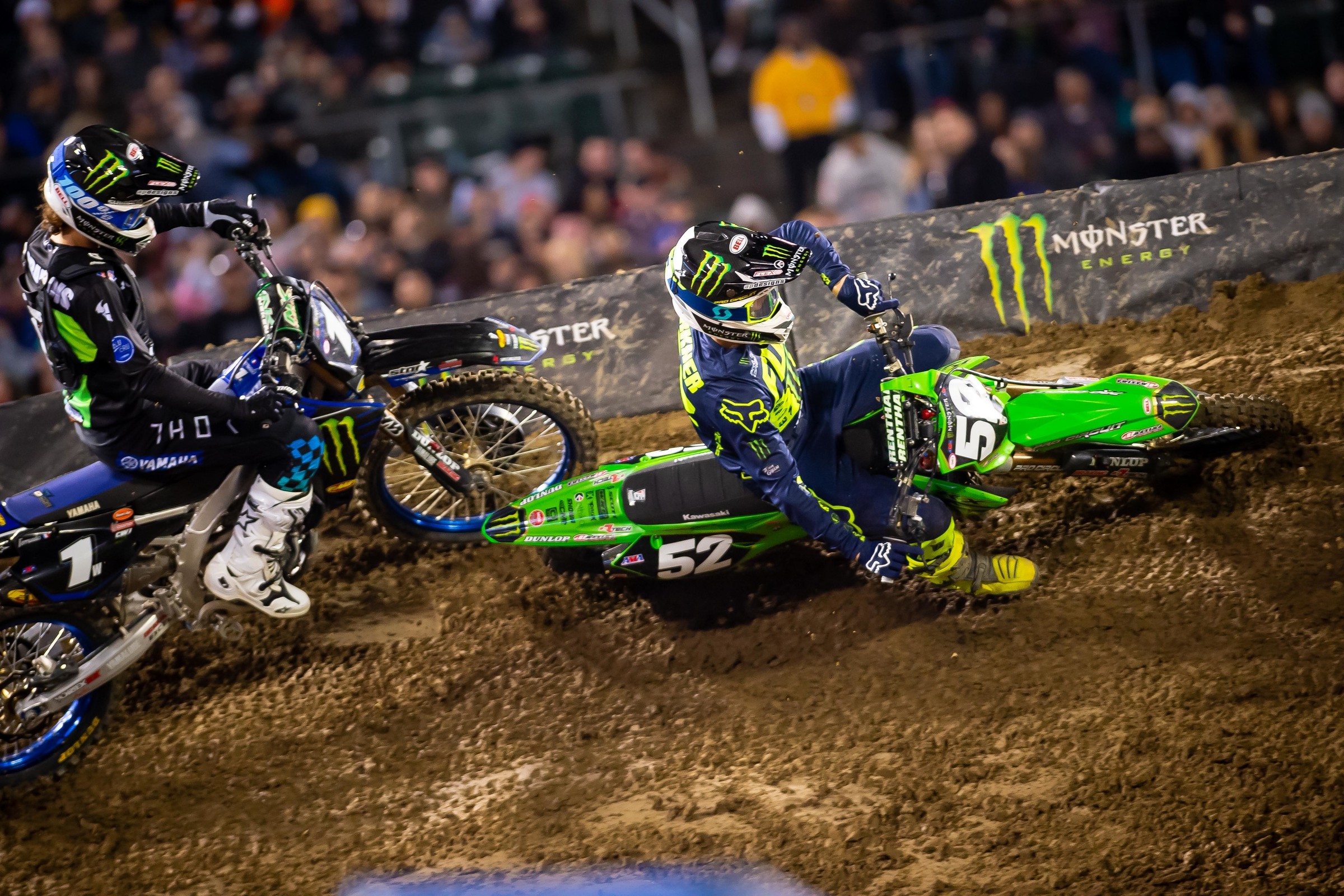 The strange thing about racing is how rarely riders actually find each other on the track.  Throw in the variables of starts and crashes and even riders that are “battling” for a championship don’t even battle at the races.

This year’s 250SX West Region Championship contains three riders, Justin Cooper, Austin Forkner, and Dylan Ferrandis. Cooper and Forkner battled immediately in their first heat race of the year, with Cooper block passing Forkner and Forkner going down. They picked it up again in the Anaheim 1 main, with Cooper pressing the Monster Energy/Pro Circuit Kawasaki rider until Forkner landed on some tough blocks and handed over the lead.

Ferrandis hasn’t been in these fights because, as usual, he’s often coming from the back after a bad start. His speed is undeniable, though, as the defending 250SX West Region Champion has clocked the fastest qualifying time at each race this year. Speed, though, is also the trade of Forkner, who even sold “Fast AF” shirts last year and won every round of 250SX East last year until injury. Forkner has  declared he’s no longer chasing qualifying times anymore after crashing away a championship in practice last year, but in the mains, you know Forkner always carries a certain swagger.

Lately, Cooper has been the one dealing with the adversity, so he hasn’t been in the fight. Forkner used his starts to get the better of the group last week at Glendale, and while Ferrandis did pass him in the final main event, the Frenchman even admitted Forkner didn’t have to beat him to lock down the overall. Forkner settled in just to lock the win in the Triple Crown with 1-1-3 finishes.

There was no place to hide in Oakland. Forkner got a great start again (his starts over the past two seasons in supercross have been unreal good) but Ferrandis finally gated close enough to set up a one-on-one battle.

For the first half, Forkner held his ground, keeping Ferrandis behind him. They clocked their best laps at about the halfway point, with Forkner’s 59.7 (lap seven) slightly quicker than Ferrandis’ best of the race (59.9 on lap eight). Then it all came apart, quickly, with Forkner’s bad run through the whoops and Ferrandis making the pass on lap ten. Forkner blamed lapped traffic, but for the second half of the race, once Ferrandis got ahead of him, he couldn’t quite hang. On lap 11, their times were almost identical. But on lap 12 Ferrandis gained four tenths, on lap 13 seven tenths, and another four tenths on lap 14. That was the critical juncture, and it was advantage Ferrandis.

It’s telling that Ferrandis made his move in the second half. Edgy whoops have led to some wild rides for Forkner, and he started jumping through them while Ferrandis stuck to skimming the whole time. That’s the section of the track where he made the pass. Ferrandis’ average time in the segment incorporating the whoops was 11.8 seconds, Forkner’s was 12.2. Extrapolate a four-tenths average gain in that section by the 16 laps in the race, and Ferrandis had a 6.4 second advantage in that area alone. He won the race by a 2.3-second margin.

There’s some thoughts out there that Forkner isn’t quite at his 2019 level yet following ACL surgery, but he and Ferrandis did race once last year at the Atlanta East/West Showdown. At that race, Forkner got the start (of course) but Adam Cianciarulo and Ferrandis tracked him down, yes, in the whoops. Forkner had gone down hard in the whoops in practice that day and choose to back in down in the night show. Plus, he still had his East Region rivals covered that night.

The whoops told the story again on Saturday night, just as they did two weeks ago when Forkner crashed back to 17th in a particularly rough set at Anaheim 2. That night, Ferrandis had already passed Forkner while coming through the pack, using, yes, whoop speed to draw up close for a pass.

There are two main separators at a supercross race: starts and whoops. Forkner has been the superior starter, but Ferrandis has been better in the whoops. So far, when they go one on one, it’s led to Ferrandis getting the edge.