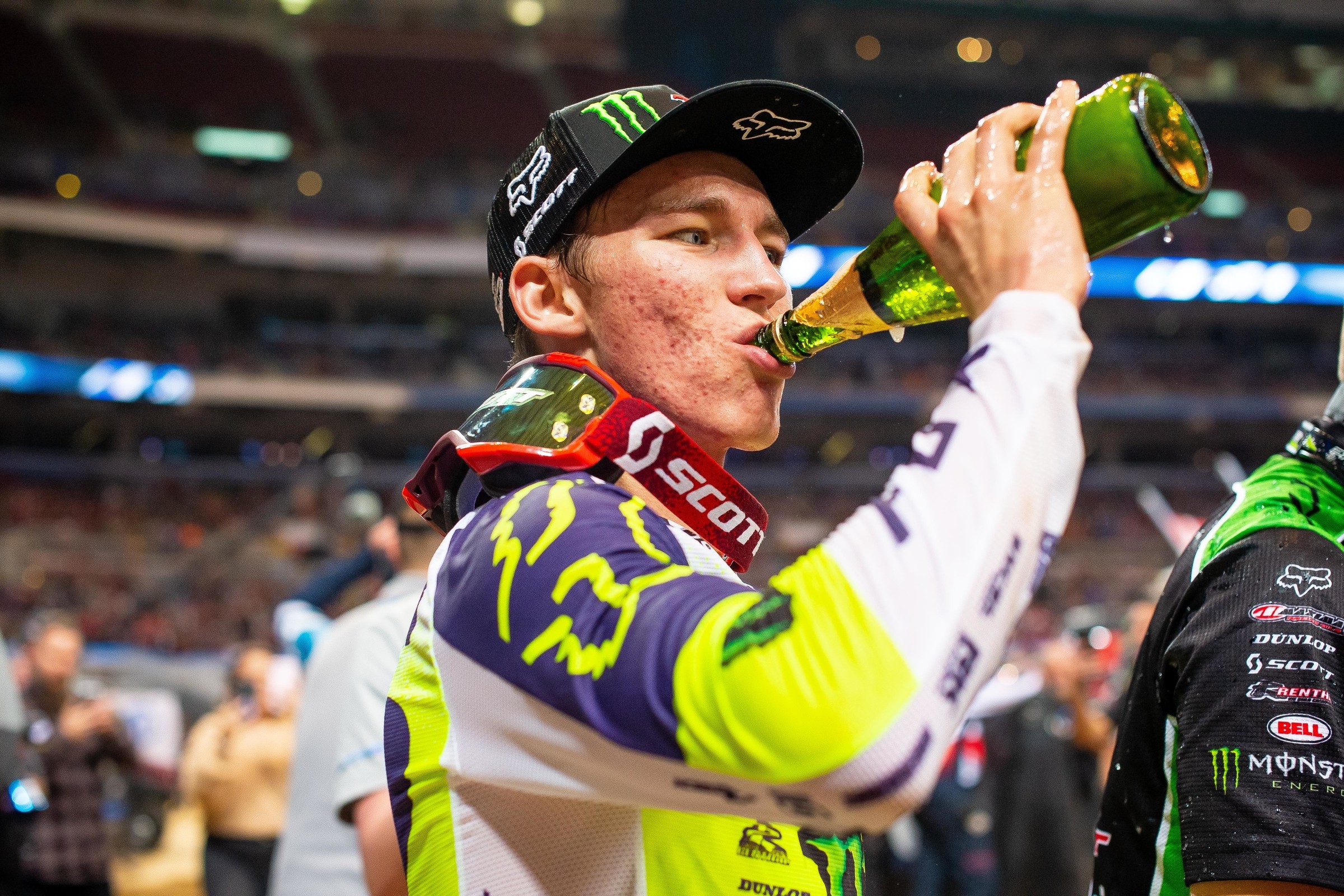 Everyone knows the story of Austin Forkner’s 2019 season. The Monster Energy/Pro Circuit Kawasaki rider was super fast in 250SX East Region. In the main events, he topped everyone in his region at the first five races of the year, but his practice laps drew attention also, because Forkner had plenty of crashes and close calls during the afternoon sessions. That became the theme of his year, because a crash in practice as Nashville left him with a torn ACL, which ultimately cost him a championship he seemed destined to win.

During his recovery, we saw Forkner at Loretta Lynn’s and talked to him for a podcast. He explained in 2020, he would no longer even try to go for top qualifying honors in practice, and he would save his best stuff for the races.

At round two of 2020 Monster Energy AMA Supercross 250SX West, that’s exactly what Forkner did. He was third-fastest in qualifying, seven-tenths off of leader Dylan Ferrandis, but got the most out of his races by grabbing holeshots, riding steady, and logging his first win since his recovery from ACL surgery.

“It was good, I was obviously happy to get a win at St. Louis, it’s kind of like a bucket list type win, this is the closest race to home and I’ve been coming to this race for a long time,” said Forkner, of Missouri. “Also, this is my first win since my ACL, so it just proves to myself I can still do it and still get up here. Hopefully I can keep it going and keep clicking it off.”

After the race, we asked Austin about his strategy. Here’s what he had to say.

Racer X: You said yesterday you’d probably be a little less nervous today, compared to round one. Did that actually pan out?
Austin Forkner: Yeah. No mistakes in practice. I don’t remember having a scary moment, or like, “Oh, that was pretty sketchy,” at all today. I had multiple of those at Anaheim. I crashed pretty hard in that last practice. I just felt like at Anaheim everybody was like, “Just go ride, just go ride,” but I just felt so not good that I couldn’t just ride my dirt bike. I felt sketchy just riding around the track. So today on practice and even in press, everything just felt dialed. The bike felt good. We didn’t really change anything, maybe a few little clicker stuff. My corner speed was back where it should be. It was kind of lacking at Anaheim. Everything was just clicking better this weekend. Everything was just back to normal. I tightened up a little bit in the main around the halfway point for three or four minutes there, and then kind of smoothed back out, but never was really making a big mistake or never really did anything that was risky. It was just a good day.

Are you making a conscious effort after getting hurt last year in practice? Whatever happens, happens, but you’re not putting huge stock in lap times?
Yeah. I obviously try to throw down fast laps, but I was perfectly happy with a third going into the races. I feel like guys kind of are figuring out that I might be kind of a sleeper in practice now. Webb qualified 16th last weekend and got third. I feel like I’m a little bit the same way. I’m not willing to push that extra edge in practice. The Star guys, they were fastest in practice and I feel like they just put together a perfect lap. All my segment times on the lap sheet where I was fastest on different laps of my segments, so I just didn’t put together a perfect lap. But I’m not stressing over it. I was third fastest. As long as I’m not way back, I’m not worried. It’s just more about how I feel on the bike. I felt good today. Being a half a second slower in practice, I feel like come to the race, we were all slower in the race. Nobody ran even close to what we were running in practice. So we were two, three seconds off of what we were in the practice in the main event. The track was completely different. The ruts didn’t form anything like practice, because everybody was going fast in the heat races so they formed all kind of cupped out and not like perfect lines like they formed in practice. They just formed really good in practice. It’s just not the most important thing. Obviously I want to be there and I want to put down good laps, but it’s just kind of how I feel on the bike, and I felt good today.

Was this all little lessons from last year, some of that practice stuff?
Yeah. I didn’t have a big crash in practice at every race last year. I feel like looking back on it, people are like, “He crashed so hard at every race.” Some races I didn’t even crash. I would just brush up against the Tuff Block and go off the track, but then everybody just remembers how I crashed in practice last year. That’s what I ended up doing for my ACL, so everybody just remembers, “He was bad in practice. He crashed all the time in practice.” So it’s not that I crashed all the time; just I did make some mistakes in practice. Today was really good. I didn’t fall all in press and practice and anything. I didn’t even really have a sketchy moment. So that’s obviously what we want. Don’t want to take any unnecessary risks, but still got it done. So, happy about that.