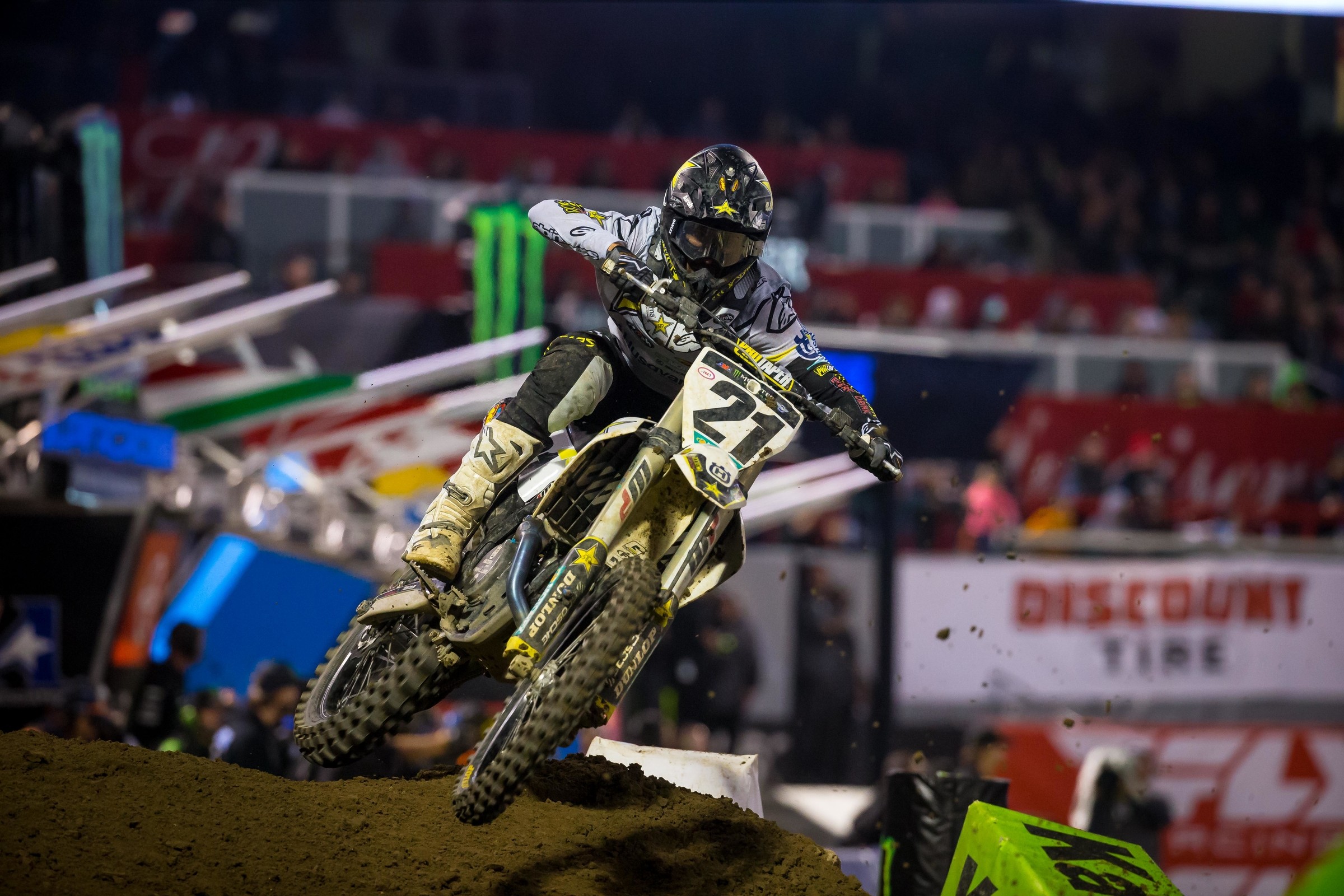 450 Words Hanging in There

Forget the “it’s a long season” stuff you hear about at the Anaheim 1 press conference. Yeah, Monster Energy AMA Supercross stretches 17 rounds, but the title picture usually comes clear much earlier than that, and by the halfway point you usually know who the very best riders are. Remember Cooper Webb’s signature ride at Arlington last year? That was round seven, and after that race he had won three times already. Jason Anderson’s amazing Oakland comeback in 2018? That was round five. Champions usually raise their hand pretty early in the campaign.

Right now, Ken Roczen and Eli Tomac have been the class of the 2020 field. They’re 1-2 in points and have combined to win the last four races. At Oakland, they were a lap away from a third-straight 1-2 finish.

So, is anyone else ready to go with them? What do they need to do to do that? Let’s look at the rest of the top 15 in 450SX points after five rounds.

It was alarming to hear Barcia talking about bike setup for a few weeks. He won Anaheim 1 and said his bike was so much better this year. He was rock solid with a second at round two. Then things went totally sideways at Anaheim 2 (18th in qualifying, ninth in the main event) and the search for comfort was back on. Certainly Barcia has stayed in this fight better than last year, when he dropped off immediately. Also, the last two races were definitely better than A2. So, this hasn’t become a disaster by any means, but the jury is still out on him getting more wins.

No one wants to hear a dude who is praising bike setup one week then saying they’re still working on it the next week, but to be fair, these tracks have trended in a direction few probably saw coming. Whoops are a bigger factor lately than in recent years, so a lot of riders and teams are scrambling to adjust.

There’s a bigger problem to solve for Barcia than whoops. Barcia was once the best starter of his generation, a holeshot artist on a 250 and he nailed a nice run of starts in his JGR Yamaha 450 days. That feels like long ago, though, as Justin hasn’t been a consistent holeshot guy in a while. He got good starts at the first two races this year and finished first and second. Haven’t seen him up front since. Somehow, those very fast Yamahas haven’t resulted in great starts for Justin. Even peak Barcia probably isn’t enough to rip from tenth to first, but if he could use his old formula, which is holeshot and fight like a madman, he’d be a podium threat every week.

Anderson is hanging in there by simply hanging around. If you subscribe to the consistency-wins-championships mantra, you’d be very happy with Anderson’s 5-3-5-3-5 finishes so far. To really win the title, though, he’d have to beat Tomac/Roczen for some wins. Can he do that?

Everyone knew Oakland was a pivotal race for the champion, and it seemed he did, too, because he was firing in practice in a manner that we haven’t seen at the previous four rounds. He wasn’t fastest, but he was a whole bunch closer. Ricky Carmichael was very high on Webb’s chances after watching practice, and it did seem like the type of track and moment for Webb to reestablish himself. Are we about to coin a term with #coopwhoops?

Well, it didn’t happen. Webb started right with the lead group and even challenged Tomac briefly, but then he lost them and spent most of the race in no man’s land. This was not trending well at all.

Just when it seemed all hope was lost, Webb went on another “can’t teach this” crazy run late in the race and performed another last-lap magic trick on Ken Roczen. Roczen’s last lap was bad, and that helped. Webb’s second broke up the Tomac/Roczen 1-2 party, but barely. No one is questioning Webb’s heart and gumption, but it was alarming to see him get pulled early in a race when he needed to show he has the speed. Grit is good, but is it enough?

You can write similar things with Cianciarulo as you can Zach Osborne and Aaron Plessinger, who we will mention later. These days, it’s one thing to simply be able to ride a 450 well. Plenty of these guys have speed, and Adam’s level has been astoundingly high in taking the fast qualifier slot in every single 450SX he’s been in so far. Even better, those fast laps look repeatable. They’re not just death laps like we saw in his 250 days.

From here, it’s down to subtleties. How much does the track change and what kind of bike changes can you make to cope? Can you adjust your riding and lines during those long main events? Adam has the tools but his performance in the day show versus the night show shows how experience helps. Really, this just comes down to how quickly he can figure out those details, because the rest of the tools are already there.

Everyone knows Mookie can go super-fast, but it seems like he and the whole Bullfrog Spas/SmarTop/MotoConcepts Honda team is playing the consistency card. Malcolm has never been in the 450 game long enough and consistently enough to really build a base. He’s been on his own privateer team, he’s been in a fill-in, or he’s been hurt. This year every piece is in place and he’s learning. As much as we love to watch Mookie Fever in some heat race whoops, there’s nothing wrong with hanging in there in the mains and taking notes.

Brayton keeps repeating the “haven’t reached my true potential yet” mantra, which teaches the mind not to settle. He could just accept pats on the back for being good for a 35-year-old, or being a solid teammate for Roczen. No! JB wants to be up there, he wants podiums or wins, and really if you don’t aim for that, you’re going to struggle. JB has been right in the mix, which is really good for a 35-year-old. Wait, I just did it.

Jeez, seriously. Baggett has been so fast at times this year. Like, so much of this group is evenly matched on speed, but he’s one of the few that can just find another gear and make it look like they’re holding him up. Did you see him roll up on Roczen and Tomac in the heat race this weekend, for example? Baggett has two problems that combine into one big one: his starts have been bad, and he’s not willing to bulldoze through people on the first two laps to overcome that. Aggressive passes and crazy-balls risks haven’t been a Baggett hallmark and might not even be the right thing to do. But it’s one of the few ways to overcome a bad start.

Blake was a bad starter for a long time and then had it fixed for a while. Now he’s back to having problems again. If he hits on everything right, he could easily win a race. However, that’s been the book on Blake for a long, long time.

Let us not forget how hard it is to adjust to racing in the 450 class. Zach Osborne has, with lap times against his Baker’s Factory mates, proven he can ride the big bike well. It just hasn’t manifested in the races yet, and that’s actually despite getting some great starts this year. For Zacho, pretty much anything that can go wrong (illness, crashes, etc.) has gone wrong. This learning curve is steep in this class.

Look at those results, then apply what I said about Mookie to Hill.

Amazing that Dean can keep bouncing back from these gnarly injuries. He had barely ridden before Anaheim 1 and is now already showing some spark. Just once, wouldn’t you like to see Dean actually start up front and show what he can do? That’s a real mental barrier to overcome—to want to live at the crazy-balls level on the first lap, especially when you’ve been through hell and back like Dean has.

Plessinger is 11th in points but his story is so similar to Osborne that its worth mentioning alongside it. I feel like AP’s superb 2018 season set him up with too much hype to live up to when he jumped onto a 450, especially with the “oh, he’s tall so he will be even better on a 450!” boost. That’s probably not fair, because it really takes three seasons for mere mortals to get the hang of the big-bike class. Aaron might need even more time, because he missed half of his rookie season last year (so did Osborne). So, yeah, this hasn’t been great but he’s not getting beat by anyone that shouldn’t be beating him, really. How good can he actually be? Might need year three to know for sure.

(By the way, just look at Cooper Webb in years 1-2 compared to year 3, which was last year. Don’t give up hope so soon.)

Friese is right where he should be, which is the best of the dudes no one in the stands is talking about. Like Brayton, Friese has taught himself not to merely be satisfied with being in there. His goals are higher than the results he’s getting. But if you look at the race wins and championship accolades of the guys ahead of him, this is damned good.

Look, consistency has never been Marty’s hallmark. But he’s fast! My hope is that he can get through the first half of the season in one piece, and when the field is a bit thinned, he harnesses all of his talent for one magical night and puts it in the top five, or even on the podium. In this field, it’s really hard to learn the 450 class and throw it on the podium at the same time. Marty needs some time on the big bike to get closer. Just don’t stack it up to badly right now, get to around round 12, and see what you can do. Podium Marty? He can do this!