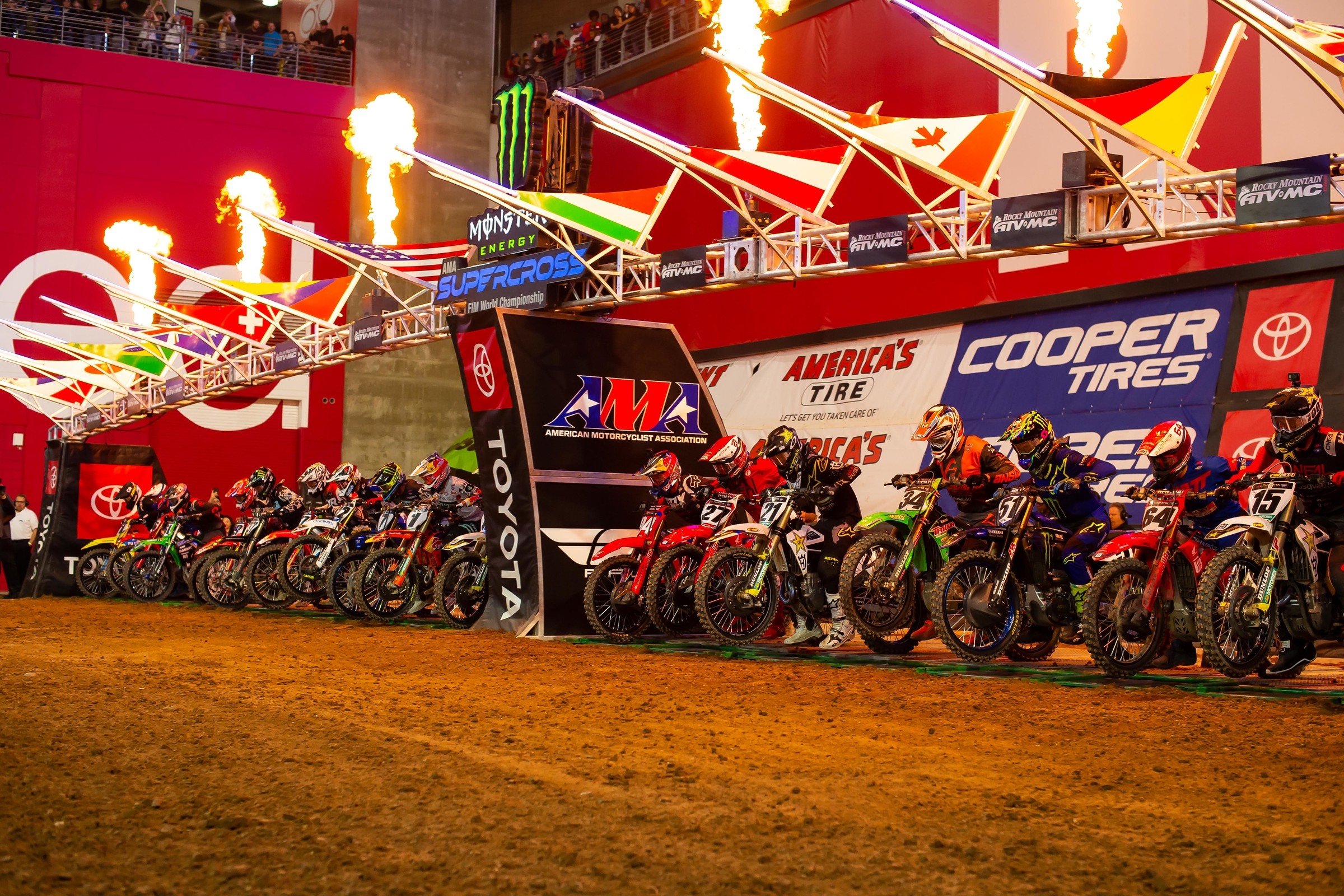 Back outside we go as round five takes us to Oakland, California. This round has grown on me over the years. Make no mistake, Oakland has rough and tough areas. When it comes to Monster Energy AMA Supercross, though, the event goes off without a hitch. The stadium is rich with history between the recently relocated Raiders as well as the Oakland Athletics.

A short walk through a tunnel will even take you to Oracle Arena, former home of the legendary Golden State Warriors. I actually walked over there two years ago, wandering around the court as the Warriors were on a road trip. I got out of there before I found any trouble but it was a cool little detour and further showed how much of the sports medium centered around Oakland. Now, as the Raiders move to Las Vegas, the Warriors moved to downtown San Francisco, and rumors swirl for the A’s, our motorcycle universe rolls into town. Hopefully our athletes give the hometown fans something to cheer about.

The track this week is very busy. There are several short sections and all are jump-filled. That’s a typical complaint with baseball arranged venues. The floor layout is different than a standard football venue, more round than square. The square-ish football venues have more options for long straightaways stretching the length of the floor. The baseball venue shape is a constant curve, forcing the track to turn back on itself repeatedly. That usually leads to several 90-degree turns and also lessens passing opportunities: 180-degree turns and long rhythm sections are the norm for football venues whereas 90-degree corners with short, busy rhythm sections are the norm for baseball shaped venues.

Oakland’s start is medium length and rolls into a wide, long, left-hand 180. A rhythm section greets riders immediately, similar to St. Louis’ first section. We saw a bit of carnage there at round two, so watch for that to possibly occur again. Riders jockey for position on that initial rhythm and can make ill-advised decisions. This section’s approach will hinge on the very first jump. If riders triple in, they will triple again and double into the corner. If that initial triple isn’t viable, they will double, then triple-triple into the corner. It will be interesting to see if anyone has the nerve to go 3-4-1 into the corner but Oakland’s soil is usually a bit soft, discouraging the outer limits of what’s possible.

A bowl berm sends riders parallel to the first rhythm and the most obvious option will be 3-3 but I have a feeling it will become 2-3-1 for most riders. Another bowl berm leads into the finish line section, comprised of a basic double-double.

A 90-degree left fires riders past the Mechanics’ Area and into a fast left-hand corner. With a few oddly placed jumps, riders will have to size up how to approach the next section. On the outside, riders could jump diagonally across the inside but will have to brake hard for the wall jump into the sand. If riders can set themselves up perfectly on the inside, though, there might be an opportunity to hop over the wall jump. This will be interesting to watch as riders experiment with line choice. Will anyone skyshot the wall jump into the sand like Blake Baggett at Freestone? Will anyone hop the wall like Stew at Daytona? Keep an eye on that section.

A hard left leads to a simple double and immediate right hand corner. Yet another simple double leads immediately into another 90-left (notice a pattern?). Riders will step on-step off from the middle of the corner, protecting the inside as much as possible. After a bowl berm, riders launch into the only whoops section. Oakland whoops deteriorate during the night’s racing and riders will have to choose between blitzing and jumping. Both should be viable options, much to the delight of a rider like Cooper Webb. His tendency to jump while riders like Eli Tomac and Ken Roczen happily blitz could be the determining factor in the main event.

The only standard supercross triple is up next, landing into a bowl berm left. An uphill rhythm section bends halfway through, forcing riders to plan and think ahead. I expect riders to triple out of the corner, allowing them to double across the bend and continue on with momentum. The final six jumps will be tricky but I am thinking they will go 2-3-1, rolling the final single and hugging the inside line as the track rejoins the start straight. This section could vary wildly depending on how the jumps are built. The most important aspect will be to jump across the bend, though. If your chosen line is to slowly roll the tabletop across the bend, you will lose valuable time. There is always a section that riders spend a majority of their time dissecting during track walk. This section could be their focus on Saturday morning.

The Triple Crown events present a different dynamic. With picks still open past the LCQ, all teams should have eight riders no matter what. If you don’t, you’re doing it wrong. With no picks jumping off the page in the 250s, it was still a difficult decision for many. There were no guaranteed double points paying riders. In other words, no riders in the 250SX night show were a 12 or above. Many of the middling riders were the real value. It was tough to pick them but they paid off. The Wagemans, Castelos, Oldenburgs, Drakes, etc., their handicaps weren’t visually enticing but they were able to sneak into the lower 30s points wise and lead the pack.

For Oakland, there will be a few to watch. Cameron Mcadoo makes his return and at a two handicap, could be a big points scorer. It’s always a little unnerving with an injured rider at his first race back, especially when it seems like an early return. Many of the same riders from last week will be likely picks, though, as there is still value to be had. Value has diminished over recent weeks for Carson Brown as his results are slowly bringing his handicap down. Watch for the Australians of Luke Clout, Jay Wilson, and Aaron Tanti to pop up on several teams, too.

In the 450SX Class, there was a lot of heartbreak last weekend. Blake Baggett’s crash with Zach Osborne, Justin Bogle’s huge start get-off, Adam Cianciarulo and Chris Blose both attempting to auger into the whoops left a mark on the people that picked them in fantasy. Other notable riders needing a bounce back ride include Kyle Cunningham (DNQ) and Chad Reed (rib injury). There are several others who have had a rough season but deserve a look due to their big handicaps. Adam Enticknap, James Weeks, John Short, Cade Autenrieth, Josh Cartwright, and Austin Politelli lead that crew. It’s a crapshoot as to who will fill in a few of the gaps that Glendale created (Benny Bloss out, Bogle out, Blose out), but there is going to be a big pay-off for someone. As for me, I am a little risk averse when it comes to the 450SX Class. I think I will stick to the elite few that I know will qualify and just hope they don’t crash. It’s risk/reward and my strategy won’t set me up for a win but I also won’t destroy my season long chances with one poor weekend, either.

Zach Osborne has a great weekend because holy guacamole, it can’t go much worse than Glendale.

Cooper Webb and Alex Martin are seen innocently leaving an envelope of unmarked bills on a Dirt Wurx bulldozer seat.

Eli Tomac wins Oakland, wrapping up his most successful January to date.

GEICO Honda’s team goes to Vegas instead of Oakland because hey, that’s what everyone is doing, right?

Zombie Chris Blose races his way to a 12th-place finish through plaster and ragged flesh. [Editor’s note: Blose will not be lining up this weekend but this is a nod to Steve Matthes’ nickname for Blose’s toughness].