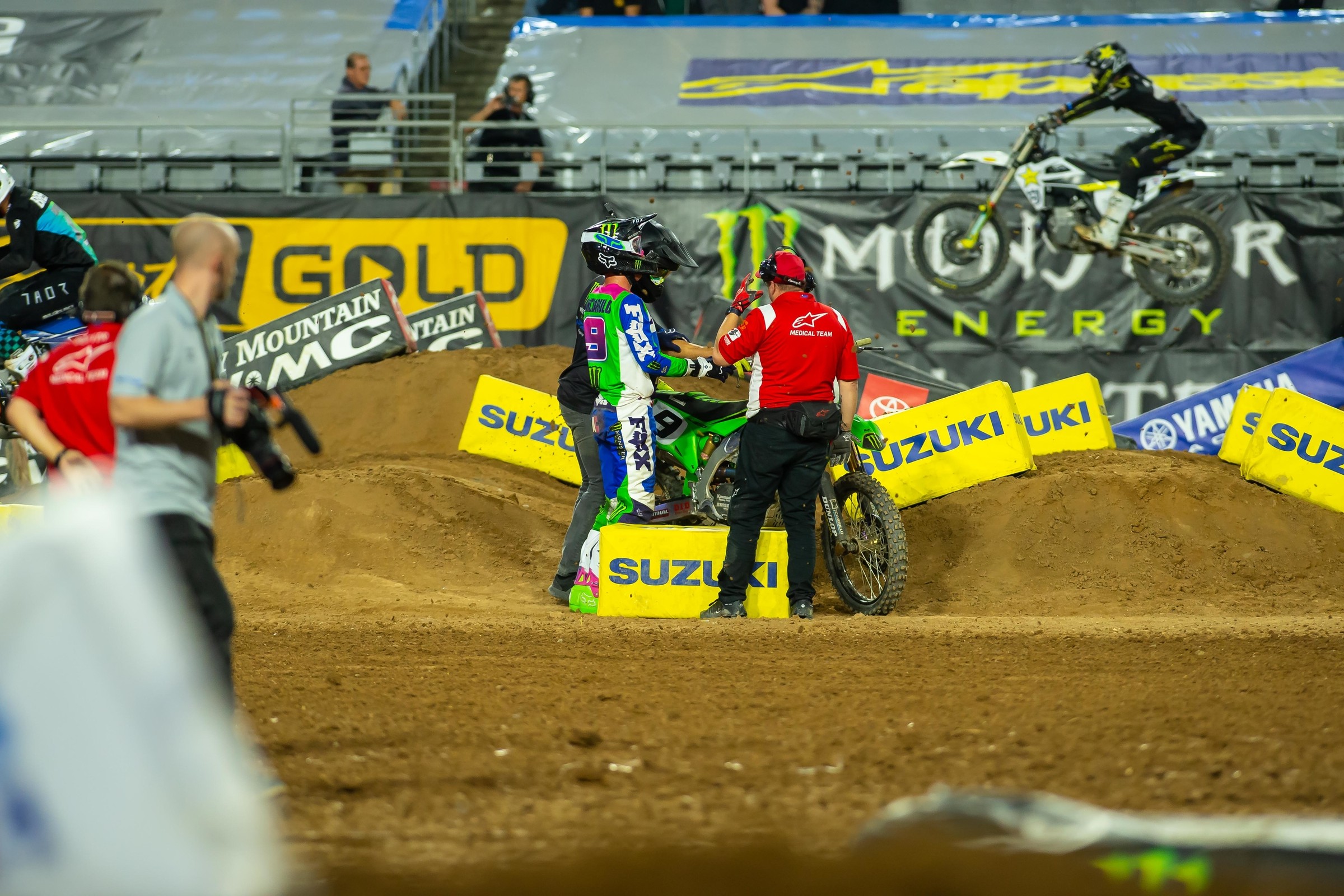 The surface of the Triple Crown events looks all chaotic and gnarly. Three shorter races lead to more starts (with a full gate of top riders) and higher intensity, but also more total laps. Certainly some riders who have dealt with big injuries in the recent past, like Dean Wilson and Malcolm Stewart, were just happy to just survive the night at Glendale.

“Trust me, I’m not gonna lie, I’ve never seen more yellow flags,” said Malcolm Stewart to our Steve Matthes. “I was sitting on the line saying ‘Lord, please, just get me through this race.’ After that second restart, I think that changed everybody’s mind set. You know what? It’s the beginning of the year, let’s just get through it.”

“I said it last year, I think it’s stupid,” said Dean Wilson to our Aaron Hansel. “It’s just so dangerous for us. Like tonight, we had five starts tonight and we had a fifth-gear start straight. I think the racing was good for me though, it was good training for me. But it’s dangerous. It’s so chaotic the first few laps and you have to do it three times, it’s gnarly. Of course from a fan’s perspective, it’s awesome. If I was a fan I’d be loving it, but as a rider, it’s dangerous.”

Yup, on the surface, three starts means more risk. Most of the riders realize the balance of racing and entertainment, so they’ll take the three Triple Crown events and accept it. Heck, Justin Brayton even mentioned watching last year’s Houston Triple Crown from home (he missed that race with an injury) and how much fun it was to view as a fan!

Beneath that, though, there’s an interesting side benefit to the Triple Crown. With the regular supercross format, a massive crash equals a huge loss of points. In a Triple Crown, results from earlier in the night accrue into the overall, and that bails out a rider who bails off late.

Today’s example is Adam Cianciarulo, who suffered a brutal get off in the whoops in the final race. This was worst-case scenario, with Adam not only flipping over the bars, but then slamming into the face of the next whoop (landing on the face or landing of the next obstacle is usually the biggest factor in a supercross crash. Alex Martin suffered a hellacious flip in the whoops last week but landed on the downside, and was able to pop up without injury).

Moto 3 ? AC was flying until this... #supercross @adamcianciarulo ?@cooperwebb2 with the endurocross move #braap

For Adam, the crash ended his night. This was terrible, although luckily he somehow avoided serious injury. In a normal supercross, a big get off like this likely means a finish in the 20-22nd range, and a huge loss of points. In Adam’s case, he still ended up eight overall! In fact, his Glendale result was just one spot worse than his St. Louis finish, where he ran up front most of the way before a last lap mishap cost him four positions. The difference between eighth and 20th is 12 points. That’s huge.

Two things helped Adam here. First, the 3-6 scores he grabbed in the first two runs helped massively improve his average. Second, there was enough other attrition that Adam, despite not finishing the final race, still took a 17th-place finish, instead of 22nd. Other riders had already dropped out due to crashes, bike problems, or other issues. Yes, the Triple Crown brings risk, but it can lessen some of it, as well. Right now, Cianciarulo sits 21 points behind series leader Ken Roczen, which sounds like a lot, but he’s just one point behind defending champion Cooper Webb.

A year ago, at the Triple Crown race at Anaheim 2, Justin Barcia bailed off of his Yamaha on the face of a jump, suffering a big crash and a tailbone injury. He took 22nd in the race, but ended up tenth overall thanks to 7-3-22 scores for the full night. Barcia had won the Anaheim opener just two weeks earlier, and it appeared this tenth had saved the season for a title contender. His season would go further south, but it would not be defined by one 22nd place finish at A2, and the subsequent loss of points.

“I’m not hating on the Triple Crown,” concluded Stewart. “One thing that’s good about it is, if you have a bad race, it’s almost like a throw away. You have one good one, one down one, one good one, mostly likely you can still consider yourself in the top ten.”