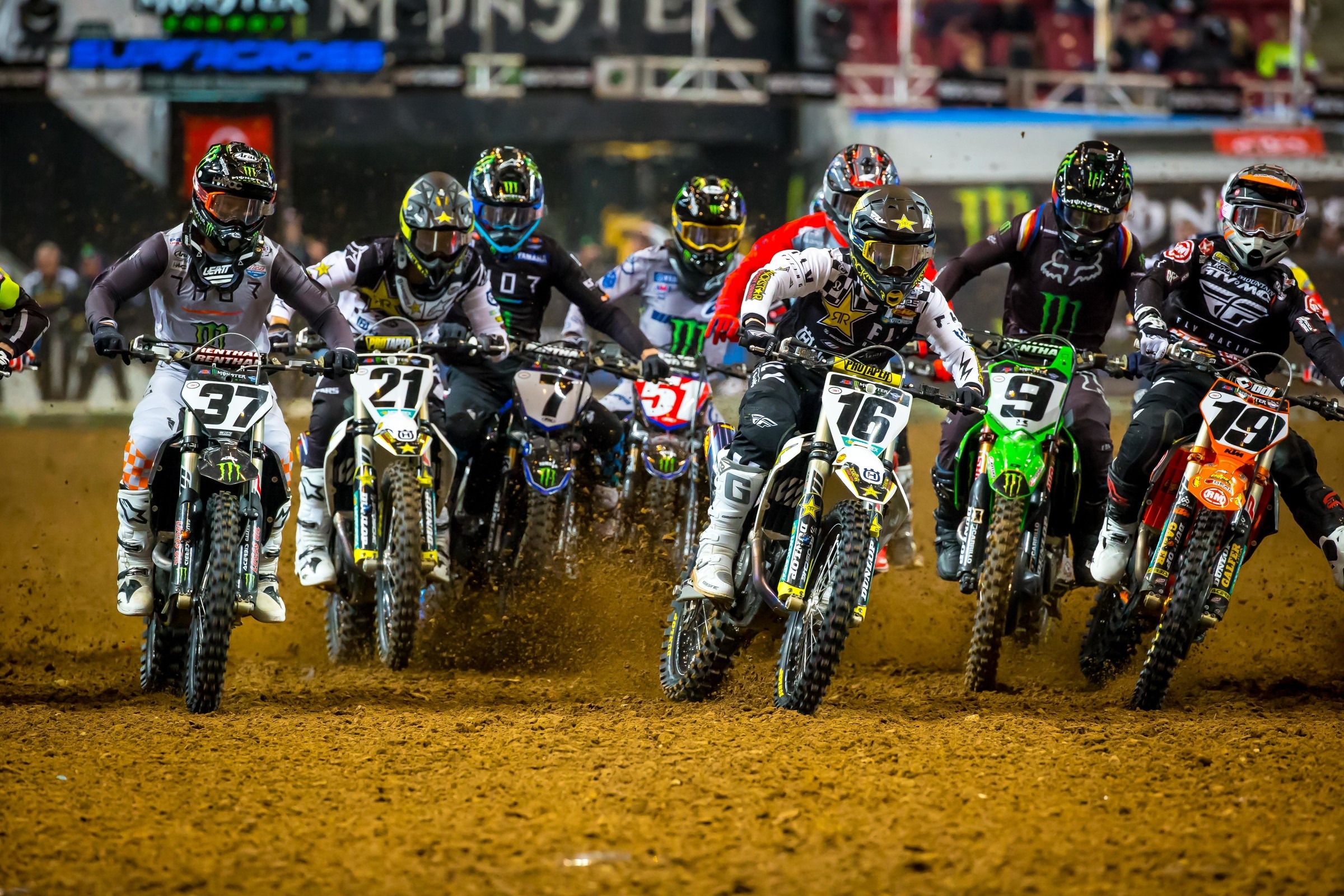 We fired some questions at former pro Jason Thomas this week to see his thoughts on some of the key talking points from St. Louis.

Adam Cianciarulo was so, so, so good in practice. He was also good in his heat and the main but not as good as he was during the day. Compare heater laps, practice laps, the track during qualifying and everything else in contrast to the actual races in the night show. What is different about practice speed and racing speed?

Timed qualifying has become an art form over the last decade or so. With the removal of qualifying races in the afternoon in favor of our current system, riders have had to develop an ability to ride above and beyond normal race pace. It has become somewhat of an unrealistic preview of what’s to come that night because the pace is very unsustainable. It’s fun to watch but I don’t usually weigh it too heavily as far as what will happen when the gate drops for the main event.

Some riders are more willing to take big chances in timed qualifying in order to have that top time. Austin Forkner got himself into trouble doing just that last year. He would continue to turn up the intensity until he had the fastest time, taking his risk level into the red. It finally bit him in Nashville, costing him a regional SX title last season (see: $500k or so).

The silly thing is that these qualifying laps mean nothing. The day after the race, no one even cares or worse, even remembers! The only period where those laps are important is from around 4:00pm until 6:30pm on race day. Then they are cast aside and forgotten in most cases. Adam Cianciarulo’s qualifying sessions have been incredibly impressive and are a bit of an outlier but in the end, there are no points paid for timed qualifying. Riders like Ken Roczen and Chad Reed are notorious for devaluing these sessions, instead focusing on race settings.

Overall, I have no problem with either approach. If you have the speed, let’s see it. The only caveat is when it requires big risk to turn in some crazy paced lap. A big crash during the season because you’re overriding the track isn’t worth whatever bragging rights associated. The season is simply too long for unnecessary risk in an already treacherous sport.

It’s a big step mentally. He had to be incredibly frustrated last season with the near misses. I still think it’s going to be situational wins because the field is too deep to just dominate right now, but that was a great night for a rider who was very overdue for some good fortune.

Roczen said his settings at round one—developed over an entire off-season—were wrong. A few days of abbreviated testing this week, he got things back in the right place. How is this possible?

I attribute this to the difference between a practice track and a racetrack. At home or at the Honda track, etc., the conditions are controlled. There aren’t braking bumps, per se, or big holes or nasty deterioration overall. The track is worked on daily and very static as far as that goes. The Honda track is rock hard adobe clay and doesn’t develop ruts. His Florida tracks are softer but again, they are constantly manicured. It’s difficult to mimic a track that had 80 riders turning lap after lap. In other words, all of that testing in the off season wasn’t done on the same track conditions that Anaheim would present. That was the big difference and why his settings didn’t work. Those untidy lines at the practice track were either filled in or avoided. At Anaheim, there wasn’t a way to avoid the ruts, holes, and bumps. His stiff setup worked on those smooth tracks that he knew inside and out. On a far rougher track that he was much less familiar with, he needed a bit more forgiveness from the chassis. It’s a dynamic I have seen it play out many times over the years and luckily for Kenny, he was smart enough to pivot this week and find a setting that works.

Zach Osborne was way better than Anaheim but still went holeshot to fifth. What’s the last piece he needs to turn a night like this into a win?

I don’t think it will take much more than time spent at the front. He has the ingredients necessary; I think it’s just a comfort level of being at the front that he will acquire. If he can make it to halfway, the crazy balls intensity will calm down a touch and he can settle into his pace. The early laps are full sprint, and everyone thinks they are going to win the race. That’s requires a calmness that he will figure out if he keeps putting himself into that position.

Or, he can just find the pace Kenny had at the beginning and pull away. That also makes life much easier!

Tomac missed the podium but did come from completely buried in the pack to fourth. Good or bad?

I don’t think it was exactly what he and team were looking for, but it was MUCH better than Anaheim. His speed was evident and undeniable. He was able to pass and didn’t look complacent when mired in the pack like he did at the first round. I think it was a good sign, something to build on, and confidence inspiring.

Who would you say is most improved so far this year compared to last year?

I am going to say Justin Hill. Sure, he hasn’t finished on the podium or anything, but he is markedly better than last season. Everyone had this unrealistic expectation after Tampa 2018 where he battled for the lead. That expectation really worked against him in 2019 as he never really flashed that. His start to 2020 has been solid if nothing else. He hasn’t looked tired or unfit, his starts are good, and he’s quietly been a solid top ten guy. I think we will see him in a few heat race battles at the very front but I will need to see more before I think he has that for 21 minutes.

We already know the answer to the above question. It’s obvious. That said, are you becoming a Barcia Believer?

I threw you a curveball with my answer, because I picked Hill, not Barcia. But  Barcia is certainly earning everyone’s respect. Last year’s Anaheim win didn’t seem to reflect what was to come. Now, he has put up a 1-2 on the board on two completely different tracks. Further, he was able to separate himself from the rest of the pack mid-battle. We have a LONG way to go, but he deserves every accolade so far.

Track offered some big jump combos. How did they play out?

As usual, there were a few options that simply didn’t pan out in the race. These typically require too much “set up” beforehand, swinging wide in the corner or simply hitting the corner perfectly to execute. The triple over the tabletop was a good example of this as most riders jumped it in their qualifying lap but in the race, most opted for the triple on-step off. The triple over required riders to hit everything just right in the corner to get the lift. That means coming into the corner on the outside, carrying momentum through the corner, and choosing an unimpeded line to jump from. With traffic, fear of block passes, and the track constantly evolving, it was just not practical. Roczen was alone out front, so he was able to use the line quite a bit, but for everyone else, there was simply too much going on to execute.

The other line after the start was usable and came down to a choice. Most opted for the inside 2-2-3-3-1, while Cianciarulo, Brayton, and a few others stuck with the outside 3-3-3-1. They were almost identical in overall speed but for those who had the outside line perfected (Cianciarulo was flawless), it looked much easier and smooth. That first 3 in was not for the meek, especially how Cianciarulo was cutting the corner short to do it. That's why most opted for the inside.

Did St. Louis’ legendary dirt live up to the hype?

It was pretty good but not as good as we have seen in the past. I think the next few months of cold, wet weather is the difference. Having the race in January didn’t give the dirt the same amount of time to soften and moisten. It was good dirt, don’t get me wrong, but it wasn’t the soft, tacky playground that I can recall year after year. The funny thing is that it might still end up being the best dirt we see all season, even if it was not at its peak just yet.

Compare Anaheim 1 Austin Forkner to St. Louis Forkner. And what about Jett Lawrence?

I don’t think there was a huge difference in the actual racing. In timed qualifying, he avoided the big whoops crash, sure. I don’t think that was due to overriding the track like last season. Those whoops were just brutally difficult.

He made one huge mistake in the main event at Anaheim and it possibly cost him a win and certainly cost him a podium finish. He was able to manage the race at St. Louis and bring home a win. I still question if his pace was good enough to beat Cooper or Ferrandis had they started up front with him but fortunately for Forkner and co., it didn’t matter. It was a great bounce back race and while Cooper was solidly second, Ferrandis gave back a gaggle of points.

Jett was awesome! He is still sketchy as can be in qualifying and even had a huge crash in his heat race. He needs to clean that up before he hurts himself, but his main event was a huge step forward. He was able to match Forkner’s pace for most of the race and I am sure learned a lot. That experience will pay dividends and his nervousness will dissipate more and more each time he’s at the front. That kid’s future is white hot bright if he can stay healthy.

As per usual in fantasy, Anaheim’s killers were this week’s heroes. Luke Clout, Mitchell Oldenburg, Ken Roczen, Zach Osborne, Kyle Cunningham, Benny Bloss, Alex Ray, Chris Blose, Jimmy Decotis, Eli Tomac, and Justin Bogle ALL delivered after disappointing at A1. That’s a who’s who of fantasy picks that all paid huge dividends this week. Fantasy picks are ALL ABOUT TIMING. If you’re on the bad side of it (see Christian Craig), you can get punished big. Craig, for example, paid off at A1, then crashed out of St. Louis, and will now be up for big points at A2. That’s the nastiest aspect of fantasy and it is a wash cycle that seems impossible to escape when you’re in the midst of it.

A2 will see the return of Tyler Bowers, Ryan Breece, Kyle Chisholm, and Jerry Robin, just to name a few. That’s four 450 main event worthy riders who will factor in somewhere, somehow. I expect to see more chances taken in the 450 class but also heartbreak as not all those guys will qualify.

One last note, Chad Reed’s early struggles have brought him into the fantasy spotlight for round 3. Who’s going to gamble on the 22?