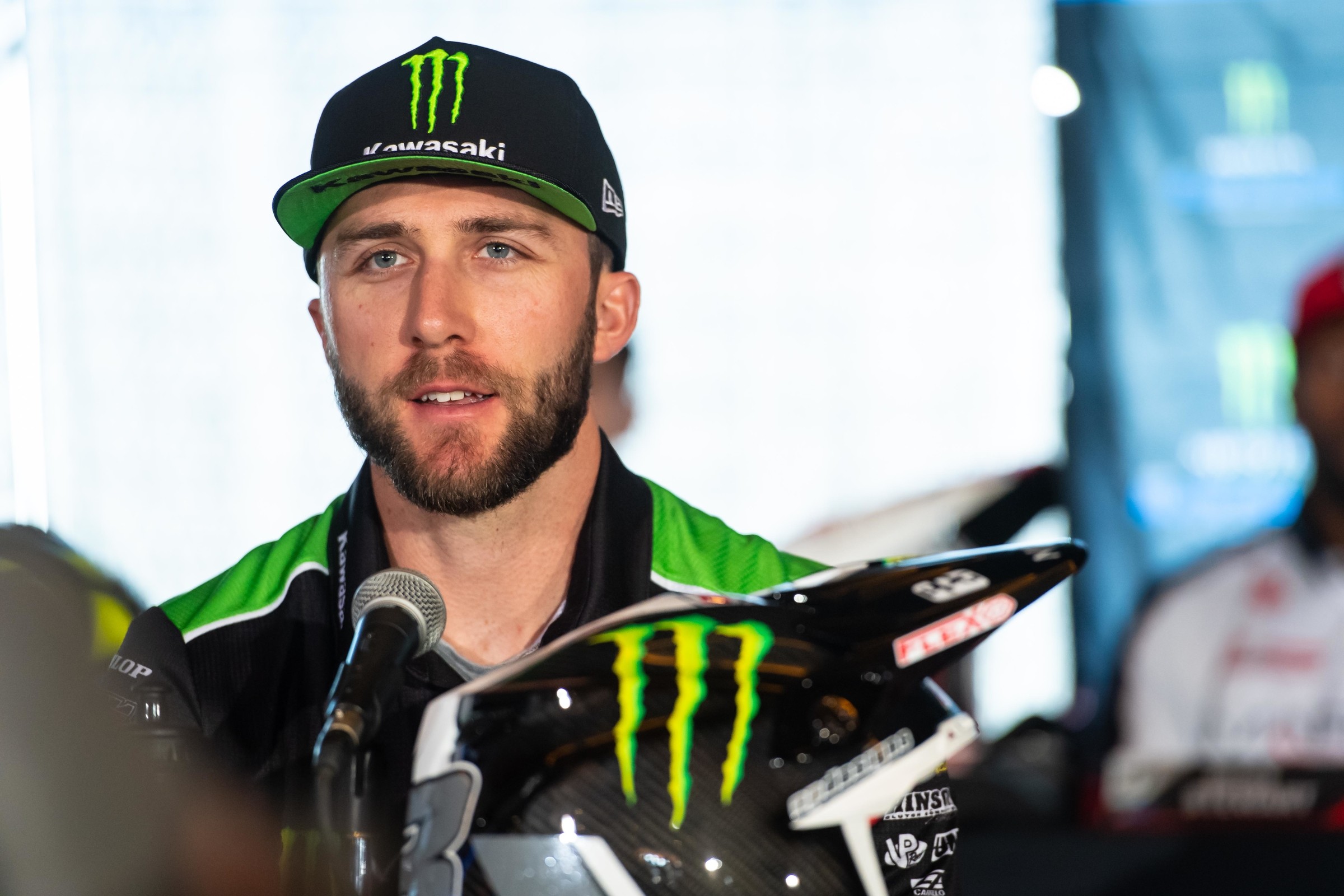 The gentleman in the sport coat behind the podium at the front of the crowded Knothole Club inside Angel Stadium of Anaheim, California spoke reverently about Eli Tomac. He called out the facts that over the past decade, pointing out that Tomac has won more races than anyone he has lined up against over the last three years.

He just hasn’t won the Monster Energy Supercross Championship. At least not yet.

Despite having claimed a total of 23 victories over the last three years, Tomac, through bad timing, bad luck, or even bad decisions, has just not been able to nail down what is arguably the most prestigious motorcycle racing championship in the world.

“Absolutely I’m here to win this championship,” declared the 27 year-old back in the Monster Energy Kawasaki pit area following a brief press day riding session on what will be Saturday night’s race track. “I mean the focus for this new season has been to just go in healthy, right? That’s half the battle, getting here healthy. The past two supercross seasons have consisted of a lot of wins for me, but it has also consisted of a lot of inconsistency. I’m trying to be a new guy that way, but it’s always easier said than done. I would love to make a statement here and try to get a win at Anaheim 1. I’m going in here with a very good base. I’m going in solid.”

Tomac clinched his third consecutive Lucas Oil Pro Motocross Championship last summer – a 12-round series fought out on natural terrain motocross circuits – and from there, entered the off-season hell-bent on preparing for the 2020 Monster Energy Supercross Series.

“There is a point in the off-season where it feels like it’s never ending,” said Tomac, shaking his head of the absolute and total commitment required to win a stadium motocross title. “That’s usually at the end of November and the beginning of December. You’re riding and training so much. Then, suddenly, boom, you’re here. Christmas is past and so is the New Year and then we have Anaheim 1. You’ve got to be ready to go. It comes up really fast and then you’re right back in the mix and there really is no looking back.

“It’s always good to get the first one out of the way as far as the new supercross season goes, but with that being said, though, I want to have a good result here. It’s on my mind. I want to really push for a win. I go back and forth with this too, but I would love to have a win here at Angel Stadium. I still don’t have a win here because I still don’t have one in the 450 class [at Anaheim 1]. That would be really neat. I’m going to give it all I’ve got and try not to do what I did in 2018, which was crash. I really want to push for that win here.

“Momentum in our sport is huge. When you’re lining up next to a guy on the gate, a lot of times they’re already beat or vice-versa. Our sport is huge that way. Making a statement the first four or five rounds – or even at the first round! – is crucial.”

It took 60 hours, 500 truckloads and 26,000,000 pounds of dirt to manufacture and configure the Angel Stadium race circuit, and from the brief shakedown session he put in on Friday, Tomac felt pretty good.

“I would say that it’s kind of average. There have been tracks in the past that have been more technical, and other tracks that are less technical. I would just call it in the middle. It kind of is what it is. We’re just going to have to go out there and race it. The most important thing for us is just feeling comfortable on the motorcycle and then the track comes together.”

Certainly a pre-race hype-out to the hilt, the world’s best supercross racers up on the big stage in the Angels’ Major League Baseball stadium big room, Tomac listened to the talk and held steady during the observations of his key competitors.

“There are always a lot of us up there on that stage each year, huh?” asked Tomac, mildly bemused. “There were 10 of us up there today for the press conference and we’re all capable of winning, but every single year there always the three guys that really get the wins and get it done. You’ve got to be in that group, for sure. What has changed is the depth of field. If you get the bad start, it is much harder to come through the field. There are only so many guys that can win, but if you do get the bad start, it now is more difficult to get to that podium position.”

Eli Tomac has had the tools for several years now. He lacks nothing in being fast or fit or capable. He just needs that Monster Energy Supercross Championship to slam it all home.

“Oh yeah, the supercross title is everything to me now. I’ve had the multiple motocross championships, but the supercross title has been the hangnail, for sure. It’s been tough for me the past three seasons, you know. Being the guy with that many supercross wins and not having the title, it sucks and it bothers me, but at the same time, it’s good motivation for me and the season. I’m going to try go get it. This is the opener. It’s supercross and it’s the sport. Everyone thinks of the Big A and Anaheim 1. I mean I came to one or two of these big supercross races as a kid and it was everything that you dreamed of. This is it. I really want to win it.”