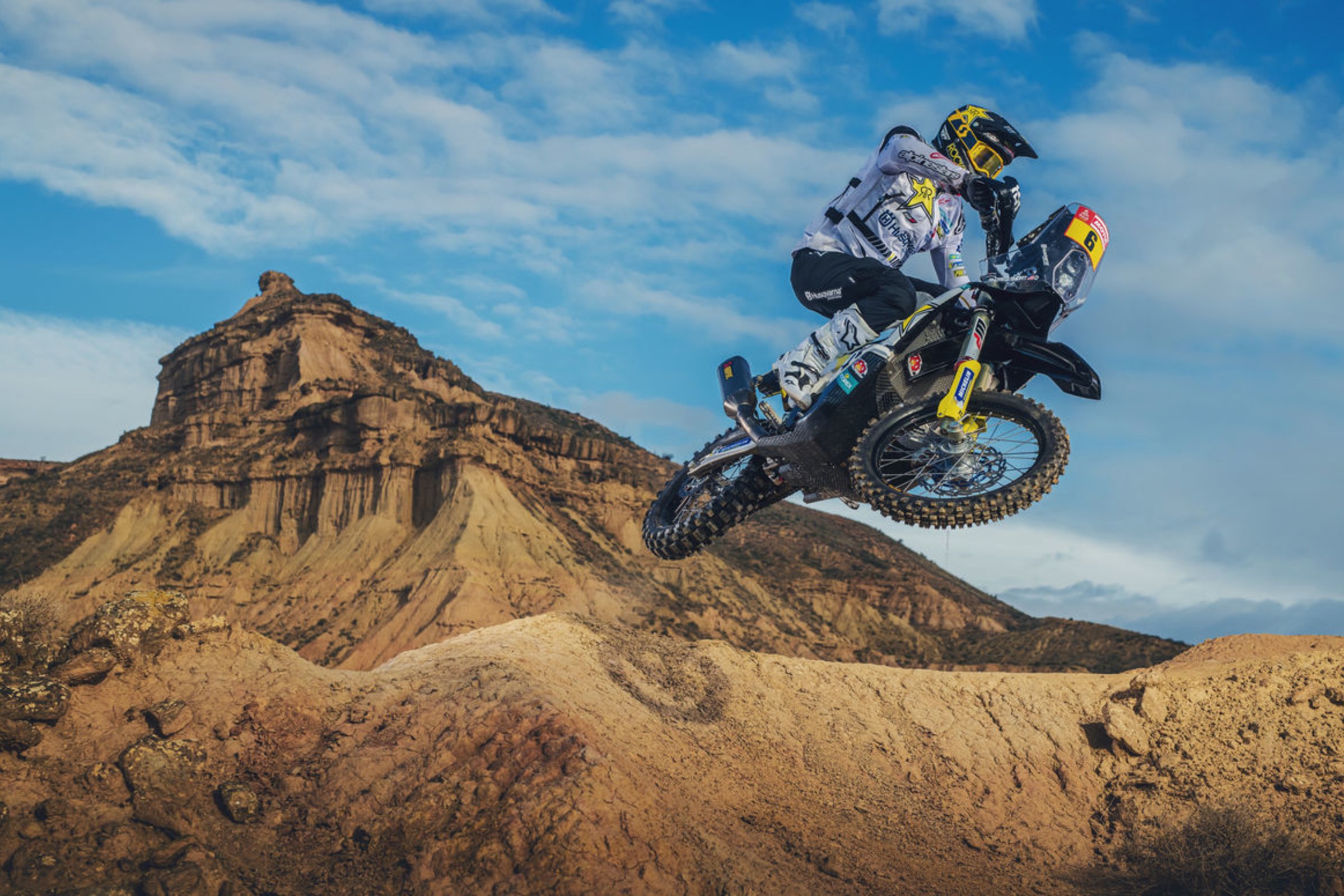 Andrew Short might be retired from motocross and supercross, but he’s far from being retired from racing. In fact, he’s currently in the midst of preparing for the 2020 Dakar Rally, which will take place in Saudi Arabia. A simple vacation to Saudi Arabia would be interesting, but to go there to compete in one of the planet’s biggest races sounds mind blowing. To learn more about it we dialed Short, who was kind enough to give us a few moments of his time to explain more about it.

Racer X: So you’re getting ready to do the Dakar rally. What on Earth is that like?
Andrew Short: This will be my third Dakar, so getting ready for this one is completely different than the first one. But it still has the same sense of adventure. We’re going to a new place, we’re going to Saudi. In one way I feel like I know what to expect. It’s my third one and I’ve done multiple rallies all across the world. But going to Saudi sounds like it’s going to be a whole new animal. From a sporting aspect, it sounds really cool. The landscapes, the terrain, it looks like it’s just one big massive desert. It’s four times bigger than the country of France. And it’s new to everybody, which is really cool. For me as a racer, Dakar is the ultimate challenge, and part of that challenge is being prepared for the unknown. It’s really cool.

How do you even prepare for the unknown? It almost makes no sense to even think about.
[Chuckles] Yeah. Saudi isn’t a place where people really go to ride motorcycles traditionally, but I think that might be changing in the future. It sounds like that’s the goal. They’re really trying to promote sport in that country. They’ve had boxing matches and even Monster Trucks with Feld Motor Sports, supercross people. And since it’s a place where nobody really goes to ride, nobody really knows what the weather is going to be like. We can look at the history and previous weather patterns, but when you’re on a bike all day, every waking hour, getting up and starting your day at 4:15 a.m., you don’t know. In the North it could be freezing, or even below. In the mountains, at altitude, it’s going to be completely different than when you’re in the south in the dunes. To be prepared for this and pack it all in a few gear bags is going to be tough but it’s part of the fun. That’s what rally is all about. You’ve got to adapt and be fast each day. You have to conserve energy and try to be your best and better than the next person.

Riding one of those big gigantic bikes in the sand dunes, that alone seems like an impossible task.
[Laughs] You sound like the typical American, it cracks me up. Rally isn’t very big in the U.S. but I feel like it’s grown quite a bit. People have this perspective that a rally bike is like a big adventure bike. But in reality it’s a really cool dirt bike. When you have nine gallons of gas on the bike, yeah it’s going to react completely different and you wouldn’t want to ride it on a motocross track. But these rally bikes, if they only have like two gallons of fuel, they’re super rad. You can go really fast. At a place like Glen Helen you could rip on a rally bike. They’re really cool, almost like handmade unique bikes that are purpose-built to go fast in the desert. They’re really fun to ride, especially in the dunes. It’s not a nightmare like what you were insinuating, it’s actually really enjoyable. Unless you have nine gallons of gas. It’s something I’ve learned to love and appreciate.

You’re telling me you’d ride one of those things at Glen Helen?!
If I had two gallons of gas I would rip at Glen Helen. They’re built to go fast and to go over dry hardpack and square edges. I can rip on one on a motocross track. Especially this time of year when I’m all pumped to go do Dakar. After Dakar, after two weeks of racing, I probably won’t even want to look at the bike. They’re pretty cool.

With the race being in a new place, does that make the logistics tougher? It seems crazy trying to figure out meeting points and stuff like that. Forgive my lack of knowledge with rally racing, but it seems like a logistical nightmare, especially at a place you’ve never raced.
It’s perfect that you don’t know, actually, because I think a lot of people think like that. That’s what’s so cool about rallying. Before, when this race was held in South America, it was probably much more difficult to get all the vehicles and everything brought into South America. But the promoter is ASO [Amaury Sport Organisation], the same promoter as the Tour de France. They do many events, but Dakar is in the winter and it’s one of their babies. They’re familiar with putting on huge races like this. They have a boat everyone has to have their stuff on by the first of December and it all ships together. You do all these technical inspections and everything before it all goes on the boat. The promoter takes care of this and it all arrives together. The logistics of what the crew has to do aren’t easy though. I think they cover 9,000 kilometers throughout the race. They build the pits each day, wake up in the morning and break it down, then drive to the next place where the pits are going to be. There’s a lot of energy and time devoted to this. It takes a lot of preparation from the team’s standpoint to make all of this happen.

Back in your motocross days did you ever think you’d be doing stuff like this?
No. I went to the KTM Ride Around in 2013 and I was just getting into trail riding. I still loved motocross and supercross. [Kurt] Caselli was there and he had his rally bike there. I was checking it out and it was like, “Whoa, this thing’s so cool!” But I had the same mentality as you. I was like, “This bike is massive.” It looked like a big street bike almost. I kind of learned about it but I was still like, “Yeah whatever, I’m never going to go fast or anything like that, that’s crazy.” But off-road life took over and I wanted to go do the Sonora Rally back when I was helping the Honda motocross and supercross team. I raced one as a fun vacation, it looked cool, and after that I was hooked. Now I’m all about rallying. I kind of wished I would have started earlier because it takes a few years to learn everything and how to be successful. I thought I would catch on much sooner. It’s a cool sport. I never thought I’d be here, let alone race one Dakar, and now I’m about to do my third. I feel like I have a pretty good shot at doing well. Life’s crazy like that sometimes.

You’re like Ryan Sipes with all these different disciplines.
Kind of. He does all kinds. I’ve learned I can’t do multiple things. To be good at one thing it takes a lot of time and dedication. I’m all-in on rally and Dakar. Mad respect to Ryan, he’s been pretty successful in a lot of different disciplines and it’s really cool to see what he’s done. I don’t know if I’m quite on that level.

Speaking of different disciplines, would you rather race the Baja 1000 solo or the Isle of Man?
Hmmmm, Baja. I’m not much of a street guy and I feel like if you did the 1000 you go at a different pace. I wouldn’t want to be the first bike on the course at Baja though. That seems dangerous and crazy, too much for me. But I think it’d be a cool event. I think a cage would be much better. Isle of Man is for sure nuts, but I think Baja, there’s something special about it.

I’d pick the Isle of Man just so I could be done a lot sooner.
[Laughs] Come on, dude.

I don’t have any more questions. You answered most of them before I even asked them. It’s like you had the list of questions ahead of time.
Yeah, well, you kind of get the same, typical questions. Americans ask you the same questions all the time. But there are some more good Americans going to Dakar. Ricky Brabec and Kyle McCoy, and a couple side-by-side guys are going also, Casey Currie and Austin Jones. Hopefully it keeps picking up in America and growing.

It does seem like the off-road stuff is gathering steam these days.
Yeah, for sure. I think people are kind of tired of spending a bunch of money to go ride five laps at a motocross track. That’s kind of dying out. I think more people can relate to off-road because they can do it. Supercross will always be the high level of racing in the U.S., the ultimate, but it’s cool to see off-road getting some momentum.