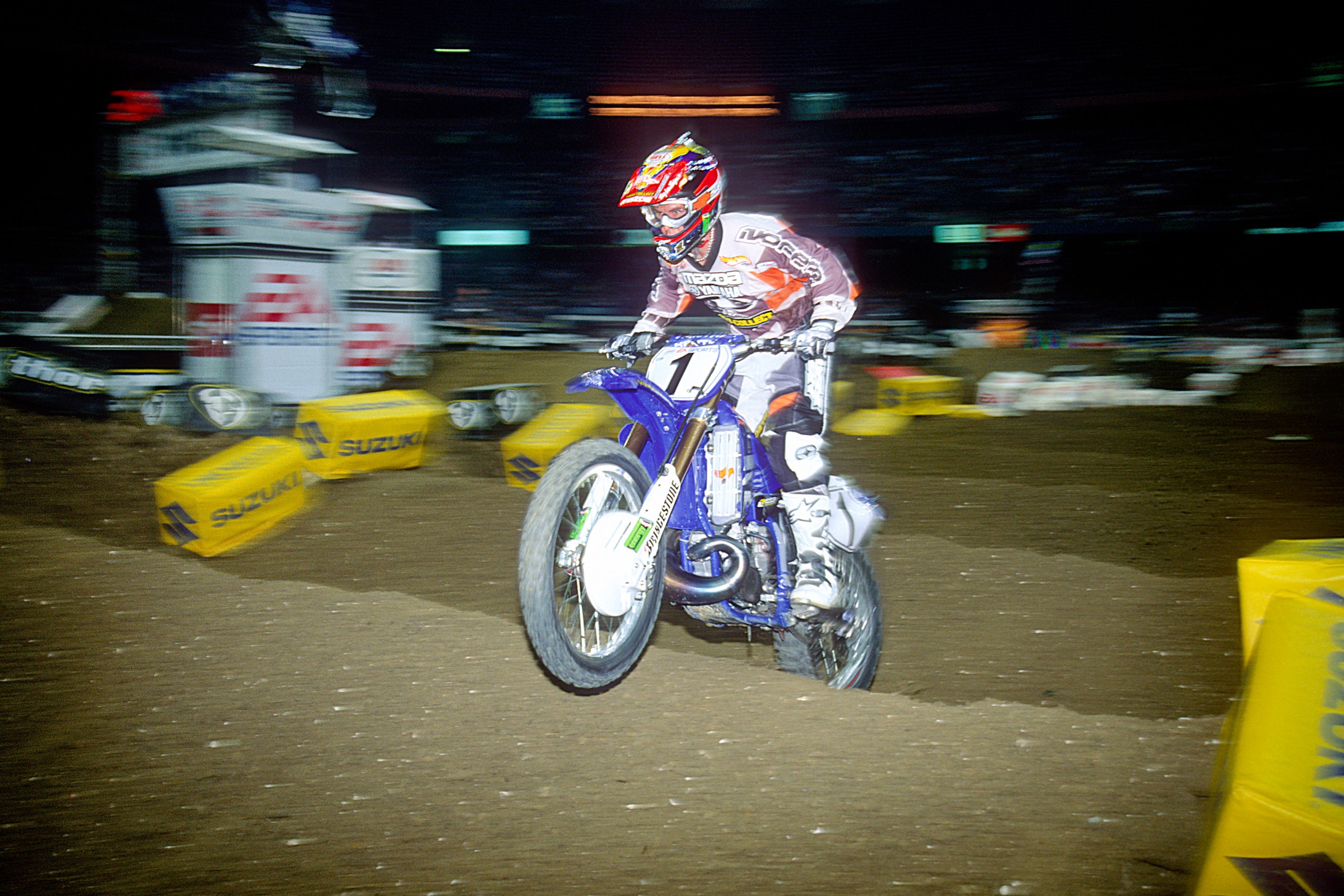 For seven years, we rang in Christmas on this website with the gift that kept on giving: Reed and Stew. It was the ultimate rivalry, with never-ending stories of grit, drama, and heart, two competitors who only battled because they had their souls set on the prize. Yes, AMA Supercross history is dotted with plenty of riders locked in on the same goal, but nothing kept giving like James Stewart and Chad Reed, who would go through team switches, career deaths and resurrections, drama, intrigue, mystery and all, and somehow still emerge fighting again. Plus, Stewart versus Reed comprised that ultimate sports contrast of styles. The Fastest Man on the Planet versus the all-time King of Podiums. Fast versus consistent. How did you like it?

When we started this tradition in 2012, we did it only to create easy content on the website during a holiday. Post the words “James Stewart and Chad Reed” and let the people have at it in the comments below.

We did figure, by 2012, that this was probably coming to an end. Yet they kept giving, throwing more race wins on the board, just as the world noticed the next set of rivals weren’t ever going to produce the magic they did. Ryan Villopoto and Ryan Dungey probably raced each other more, and finished 1-2 in championships more, but they never took it deep like James and Chad. This was something special.

Stewart had not raced in years, but alas, now it’s officially over because Stewart briefly came out of hiding over the summer with a video series, and actually really used the word retirement. You will see Reed on the track in Monster Energy AMA Supercross again in 2020, but Stewart is done. They won’t bang bars in anger. This is over. If you like Christmas traditions to remain as they are, go down into the comments section below and tell your favorite Reed/Stew stories. It’s good.

So, what do we do now with RacerXOnline.com? It’s time to start a new tradition, and we believe we have timing on our side. Incredibly, the 2020 season will mark 20 years since Jeremy McGrath’s last supercross championship. He won his seventh in 2000. McGrath has remained relevant and his King of Supercross reign will not ever be questioned. But after 20 years, perhaps some of the memories are beginning to fade. Maybe there’s some recency bias. So, let’s tell some McGrath stories, and then you can add your thoughts below.

Here’s how powerful Jeremy McGrath reign was: In this small, niche sport, we always talk about “growing the sport” and trying to “become mainstream.” It’s forever the goal, the hope and dream that dirt bike racing will grow like stick and ball sports, and our athletes and industry can flourish like those. Perhaps you enjoy following a niche sport, but everyone would love to see more money, more rides and more teams to support our heroes. Thus, growth is a worthy cause. We love it and we believe many others should, too.

However, Jeremy McGrath is one of the few who actually did grow the sport. His 1990s ascension to the top of the pyramid coincided with the consolidation and organization of the supercross promoters, and together they grew with each other. Supercross, which had previously been stunted through starts and stops with different promoters and sanctioning bodies disagreeing every few years, finally found stable ground under one ownership group. The series became more organized, and it had a brand-new star to promote. By 1996, McGrath had become not just the most dominant rider in his sport, but arguably the most dominant athlete in any sport, as he flirted with a perfect season, winning the first 13 supercross races in a row. Go read Steve Matthes’ epic oral history of that season to understand the type of attention McGrath’s streak began to garner.

The streak drew attention the sport had long sought but never could sustain. It’s impossible to separate the combined forces of McGrath’s star power and supercross’ improved organization. The two things worked together. What is not in doubt, though, is that supercross crowds grew massively during the McGrath reign, and by the 2000s, people were calling this America’s fastest growing sport. That wasn’t being said a decade earlier.

McGrath won all the time, and also at the right time. The 1990s also featured explosive growth for NASCAR racing and extreme sports comps like ESPN’s X Games. Supercross was a bit of a mashup of both, and at the top sat a charismatic athlete who enjoyed the spotlight so much that his nickname was Showtime. This was an easy sell. Into the momentum created by McGrath came superstars with names like Carmichael, Pastrana, Stewart, and Reed. They were royalty in their own right, but no doubt the profile they enjoyed was set up partially by the man who boosted the sport before them.

Jeremy McGrath appeared on late night talk shows like The Tonight Show with Jay Leno.  Jeremy McGrath had toys made by Hot Wheels. Talk show appearances and toys were not part of a dirt bike racer’s portfolio prior to McGrath. Jeremy McGrath was part of red carpet celebrity junkets and awards shows. Jeremy was the closest the sport ever came to mainstream, outside of Travis Pastrana, but most of Travis’ famous antics came far away from the racetrack.

Want some proof? Jeremy started his own team and got sponsorship from Bud Light.

This was in the earliest days of true outside sponsorship for teams. When McGrath retired before the 2003 season, Bud Light didn’t shift its money to another rider or team. Bud Light left.  It was only around to sponsor Jeremy McGrath. He was boarder line bigger than the sport at that point. But he also made the sport bigger.

There are very, very few that can say that.

His last title came in 2000. His last full-time season came in 2002. McGrath is the all-time leader in supercross wins and titles. His impact is even larger than those numbers, though. If the sport is big now, it has Jeremy McGrath to thank for it.

Go share your MC stories below, or remind some others who might not realize it’s been 20 years since his last title. Merry Christmas, everyone, and to all a good night. Jeremy McGrath had 72 really good ones inside of America’s biggest stadiums, and the sport is better for it.