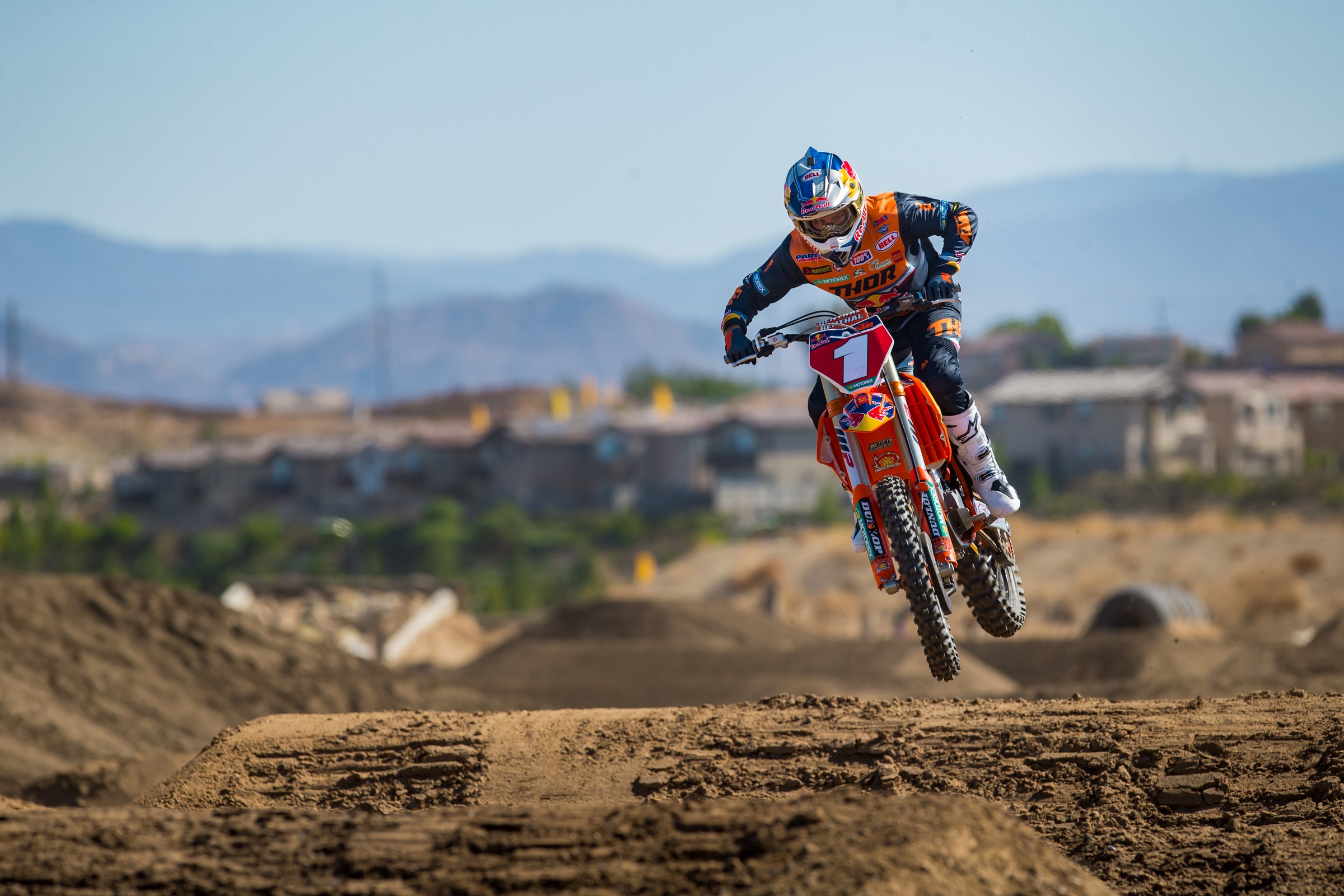 We’ve wrapped shooting for our annual Monster Energy Racer X preview shows for the 2020 run of Monster Energy AMA Supercross an FIM World Championship. In over one-hour of discussions (episodes one and two have launched and we’ll have three more parts soon), there’s so much ground to cover. However, some of the main stories are obvious.

Let’s get pumped on the upcoming season by running down some of the key points from our shows.

Is this finally Eli’s year? Steve Matthes says it in episode one: “Eli, for the love of God. Eli. Just. Get. This. Done.” Perhaps no rider has ever been so good for so long and not won a Monster Energy AMA Supercross Championship. With 27 career wins, Eli has blasted past famous bridesmaids Damon Bradshaw and Kevin Windham to become the winningest supercross rider without a premiere-class title. Consider that Cooper Webb and Jason Anderson, who now have titles, have just seven career wins each. Or consider a similar situation, which Jeff Emig described of himself earlier this week:

Yes, the stats alone could tell this story, but actually watching the races makes this seem even weirder. At least Bradshaw advertised a checkers-or-wreckers mentality, always willing to risk points to try to get the win. That backfired on him a few times too many (Bradshaw’s meltdown at the 1992 supercross finale always gets the attention but crashing out of the Indy supercross that year while running in second place cost him the most points). Eli? He’s not really a huge crash or injury guy. He’s won three-straight Lucas Oil AMA Pro Motocross 450 Championships, which can’t be done if you’re completely reckless. In supercross, he’s been amazing mostly, but things just continue to not work out for him.

You know this, we know this, Eli, and everyone around him knows this. Our panel (Matthes, Jason Thomas, and I) still picked Eli as the favorite for this championship, just like in 2018 and 2019. This is either the safest pick or the riskiest pick.

What’s My Motivation Here? In contrast to talents like Tomac and Ken Roczen, who continue to chase that elusive supercross crown, Jason Anderson and Cooper Webb already have titles here in the premier class. Recent history with Ryan Villopoto and Ryan Dungey, just to name a few, shows winning one often leads to another, however, there’s always that fear that one title can make a rider become complacent. We can’t read much into Anderson’s 2019 season because he only made it to three races (one of them was good, two of them were bad), and the jury is now out for Webb. After two rough 450 seasons, Cooper’s proverbial back was against the wall last year, and he delivered. Now his place is much more secure. Will that take away any fire? Anderson rode with a locked-in focus in the early stages of 2018, which is what allowed him to build a huge points lead and then manage things from there. Will he be the same guy in early 2020?

Confidence Kills: One key to Webb will be his early-season races. Every rider feeds off confidence, of course. But it fuels Webb to an incendiary level. You can literally see his swagger when he gets it rolling, and last year was no exception. He won early, and it was lights out from there. Did anyone really think, after that Arlington charge last year, that he wasn’t going to win the title? Now, onto 2020. We know this year’s field is capable, and if they can hold him down early, it might prevent him from getting the mojo again.

Party in front, business in the back: As for Anderson, he’s arguably become more famous for #TeamFried than for winning a supercross championship. That plays well to his loose style, but trust us he’s more focused, smart, and serious behind the scenes than he makes it look. He has to be. Anderson is aware the fun stuff only plays well when you’re getting results. If he starts struggling, the fans are going to immediately turn to, “Stop doing the goofy videos with your friends and start training.” Do a few videos really take away from training? Not at all. It’s just easy fodder for the people, though. If he wants to keep the good vibes flowing, he needs to keep delivering on the racetrack.

Reserved: Ken Roczen has never been short on confidence in his skills—and with his talent, he shouldn’t be—but the years have been tough on him, and he’s giving out a much different vibe than he did a few years ago. Going into 2017, the easy narrative was that Roczen was poised to bring Team Honda back to the glory days, with wins and titles raining down. Our man Aaron Hansel attended Honda’s 2020 media intro day a few weeks ago and said the vibe was more friendly and fun as opposed to, “we’re out to kick everyone’s ass.” Roczen was measured in his interview with Hansel, talking about managing things and enjoying himself more than predicting wins or titles. He’s capable, no doubt, but win-or-bust is a bit heavy for a guy who has been through so much.

Still, you can never sleep on Roczen. There are still some lingering questions about managing his health throughout a season, but the world would not be shocked if he figured it all out and had the #1 plate at the end of the season.

Reserves: Part of that fun and friendly Honda vibe comes through all the other teams getting support. The SmarTop/Bullfrog Spas/MotoConcepts Honda squad has become a legit thorn in the side of any traditional factory team, and Honda is glad to be working with them and not against them. Justin Brayton made that team a race winner two years ago, and with Malcolm Stewart and Justin Hill, two of the most talented riders in the pits, it’s not impossible for MCR to run at the front again. Vince Friese keeps getting faster, too. Brayton, by the way, is now on the full-factory team along with Roczen, further proving how strong the MCR/Honda HRC relationship has become. Honda’s got strength in numbers these days.

Plan B: Speaking of strength in numbers, the story getting the most buzz this off-season is Adam Cianciarulo’s entrance into the 450 class. Monster Energy Kawasaki has him paired with Tomac on KX450s. Fast rookies are common, but Adam is striking a unique chord, even without a 250SX Championship to his name. As Emig told us, Adam’s ups and downs make him more seasoned and experienced than the average 250 rider, so he might be able to avoid the typical rookie mistakes. Plus, he already won Monster Energy Cup, and Adam’s hype from the younger years (winning the first supercross he ever raced, as an example) means his talent and potential is not in doubt. People are rooting for Adam—he’s just too likable for people not to be excited about his debut.

The Wild Cards: We’ve got two weeks until Anaheim, and many more stories to cover. This is especially important considering recent history. Anderson won the 2018 title, and while he was definitely on the contenders list, he wasn’t an easy consensus number-one pick. Last year was even crazier, as not even Cooper Webb himself was picking Cooper Webb to become champion. It was a surprise, and it shows that anything can happen. So, leave no one off your list. Zach Osborne has the pedigree to do big things. Really, is Osborne’s ceiling any lower than Webb’s last year? Nope! So it really wouldn't be very whacko for Zacho to start winning and fighting for this title

Blake Baggett whipped up on everyone in Glendale last year. That's Baggett's style. Just when you think you've got him pegged, he logs a hero ride and goes next level. What about the Monster Energy Yamaha Factory Racing duo of Justin Barcia and Aaron Plessinger? Many riders could shock the system. Last year’s Anaheim 1 press conference featured 11 riders, all with big names, capable teams and great potential. Webb wasn’t even one of the 11 on that stage and he turned out to be champion. Lately, if we’ve learned one thing, it’s that we don’t really know anything at all.