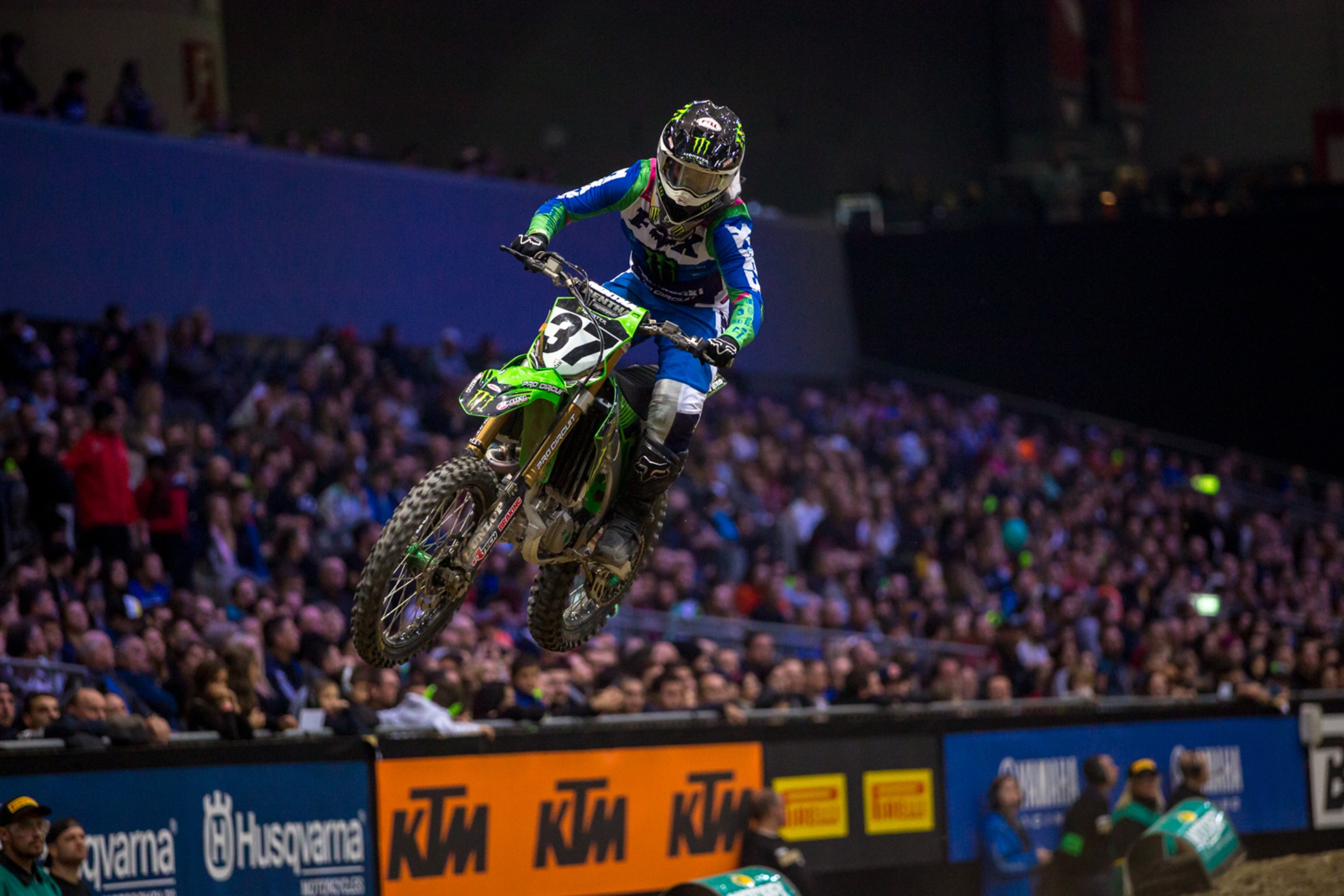 Finally! This will be the last time Martin Davalos will ever be associated with a Racer X Online feature named 250 Words, because he is now, truly, officially, no longer a 250 rider. His dreams of a 450 supercross ride have come true courtesy of Team Tedder with factory support from KTM. However, before that deal came together, Marty had already signed to race the Geneva Supercross, and he had a Monster Energy/Pro Circuit Kawasaki KX450 for it courtesy of Mitch Payton. So Marty rode a Kawi one last time in Europe.

Guess what? Marty is darned fast on the big bike just like he was on the 250 for so many years. He won Friday’s main event and led laps on Saturday, looking good to win King of Geneva honors, until he went down in a corner. He recovered to finish third, and his 1-3 scores over two nights left him second overall to Justin Brayton.

Our man Steve Matthes was there and recorded a live post-race show where he interviewed Davalos, who has, somehow, become “his guy” after all these years. Here’s the post-race views from Steve and Marty.

Racer X: Could have had it, huh? Looking good. You were using that inside line in the sand, which JB was not. He was going outside. I was wondering which one was better. You just came in a little hot.
Martin Davalos: Yeah. Brian actually told me, be careful on the inside. Yesterday it was working very good. They fixed it, and on my parade lap I really liked it. I just came in and it was sandy on the landing of that triple in, and I just kind of tucked the front end. Unfortunately I got stuck under the bike. One of the flaggers helped me. It was just a learning experience for me. The guys were riding really good. The track was difficult. I got great starts. That really, really helped me today. Just to run up front was good for me, just to see where I’m at. I made some rookie mistakes. I was over-riding the bike a little bit coming out of the corners. Just got so much power. I’m used to that 250. You really have to hit it. But that’s the reason why we came here, just to learn a little bit. Now I know what I’ve got to work on.

I think overall you’ve got to be happy. You have to be happy with the whole weekend. You showed speed. You had the win, I think, tonight if you hadn’t gone down. Your whoops speed was good. You’ve got to be stoked.
Yeah, I’m super stoked. I came here to be safe, to get some gate drops. I was riding good at home. I knew I was going to be fast, but I surprised myself a little bit today. What really, really surprised myself was the starts. I was really consistent. I think that’s going to be a huge, huge thing that’s going to matter in the supercross season for 2020. I think starting up front is going to make it a lot easier to try and run up front, because there’s so many talented guys.

Vince Friese stopped by yesterday and he was saying, “My motor is bone stock. I just need a little bit more off the start.” You did have a bone stock motor, except for a muffler, and obviously you were making it work. I was watching your helmet for the main event. I just watched your helmet and your first instinct was good. Just on it, man.
The bike has got so much power. Honestly, if there is any kind of hesitation of movement, it’ll bring your weight back and it will pull you back. Then you’re going to double, triple clutch and then it’s over. We’re talking about one one-thousandth of a second. If somebody gets the wheel in front of you, they can control you. So it’s very important. I’ve been really, really focusing on that. This bike has got a lot of power. It’s hard to be consistent. That’s one of my biggest surprises. I was very, very consistent. I was really focused. Been working at home at MTF [Millsaps Training Facility]. I’m riding at MTF now, and it’s been really helping me. I’m pumped.

I was bugging Brayton for his dirty move in the duel. How do you feel about that? He came across, he knocked you off the track.
I’ll be honest with you. Yesterday I had to come in a little hot to give myself a chance to go into the third. I didn’t think I was that aggressive.

He thought you were.
Yeah, he got really mad. I apologized. He didn’t even want to talk to me or nothing. I personally think it was an aggressive move, but it was safe.

I thought it was fine too, honestly.
He kept it going and I thought he was really going to stop. I had the inside. I had control. Today he hit me going to the face. I was like, dude. It is what it is. Justin is aggressive. I’m glad he did it. I learned. I left the inside open and he was able to control me.

He told me, “He broke my buckle.” Like you hit him and you broke his buckle. I’m like, stop it, Brayton. It’s fine.
He’s fine. We both are a little older. I understand where he’s coming from. This is a race that it really doesn’t matter to us. He wants to come in healthy. I want to come in healthy. I was just in the moment. It was fun. I wanted to give him a run for his money. It kind of worked. Today he got the best of me, so it is what it is.

It’s too bad, but again, I think the whole weekend was a positive for you. Now you can get back on the KTM for Team Tedder and you know that your 450 speed is good. I was texting back and forth with Adam Cianciarulo. He’s very happy about your results. He was like, “That’s my guy!” I said, “He looks good, dude.” Adam was pumped.
Yeah, me and Adam have developed such a good relationship. We were teammates when he first stepped to pro and I was with Mitch. He’s such a great guy. I really admire his dedication and overcoming the injuries. I’m super pumped that I’ll be able to still race him next year. He’s going to be an incredible competitor. I think he’s got so much potential and such a future ahead of him. I’m pumped, man. I’m 32. I have a new baby now. I’m so happy. My life is good right now. I’m excited to be racing. I’m thankful for the opportunity for Eric [Peronnard] to bring me here. I’m thankful for Team Tedder because there’s no rides out there. I’m thankful to have this opportunity.

You’re going to have good parts, right, from what I understand? Roger [De Coster] and Ian [Harrison, team manager of Red Bull KTM] have committed some good stuff for you?
Yeah. When I flew to California, Ian, Roger and Carlos were there. They agreed that the bike is going to be competitive. It’s going to be what Blake [Baggett] and Justin Bogle have and Cooper [Webb]. I’m sure there’s a few things here and there, but I think to be honest with you, this is the best motorcycle I’m going to have without being under the factory tent. I’m blessed about that. I have a great boss [Matt Tedder]. He’s an awesome person. Dakota is kind of helping out until he gets better with his wrist. I just want to come in and have fun. It’s my rookie season. I’ve got a lot to learn. It’s a long season. I want to be consistent.

Fitness too, man. When I talk to 250 guys that move up, they’re like, that extra five minutes, it makes a difference. So that’s something you’ll find out as you get into it.
I think so. The track deteriorates really, really badly too on the 450. You’re not doing 20 laps anymore. You’re doing 30, it depends on the lap time. I think line choices are going to be important. I think picking good spots and safe spots, be aggressive when you have to and consistent.