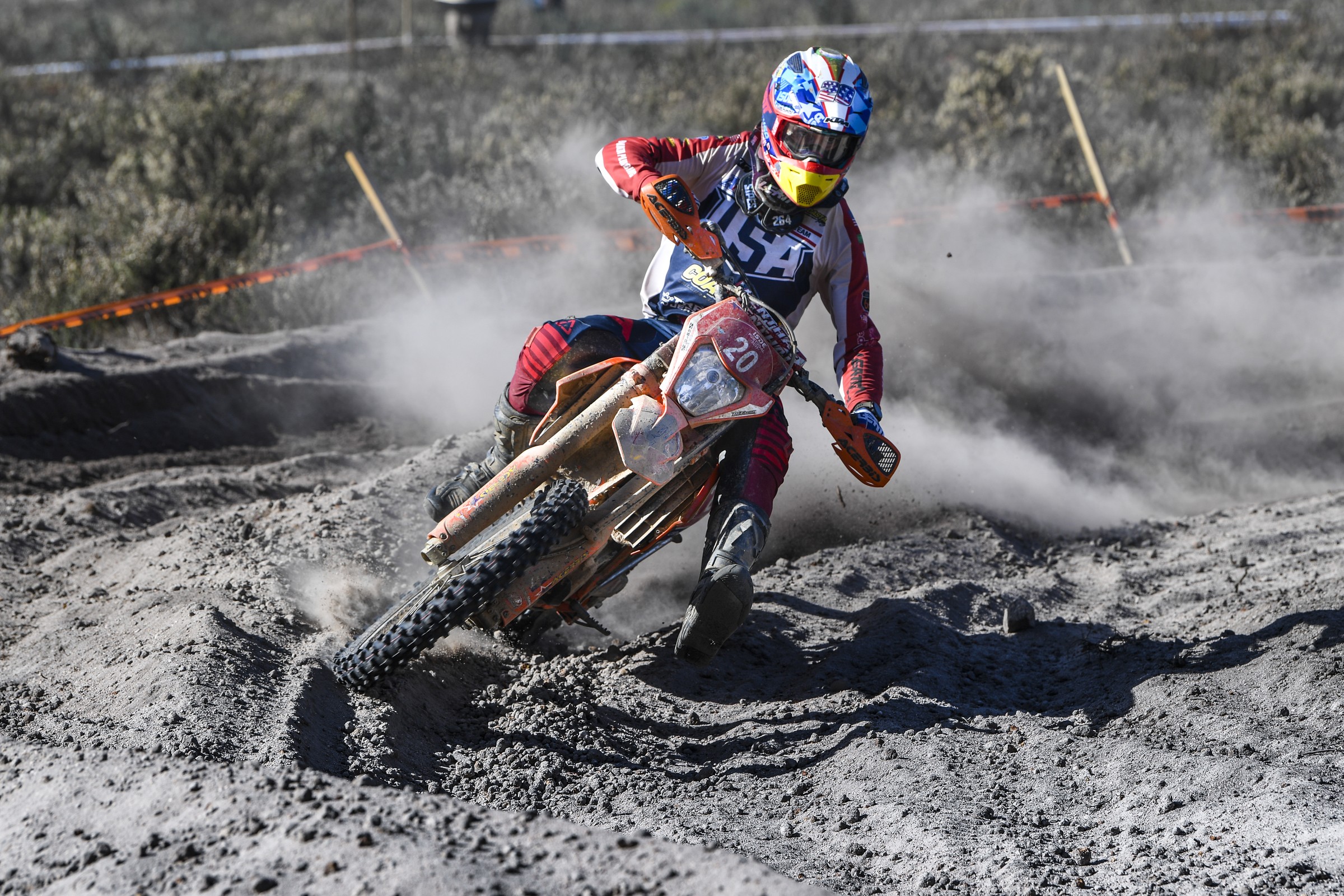 We have called upon Ryan Sipes here and there to pick the brain of the well-versed, veteran racer. This week, we reached out to Sipes to give us some first-hand insight on the International Six Day Enduro (ISDE).

Everything from walking the special test paths the week before the event to what work needs done on the bikes between tests, and more, Sipes gives us his rundown of Team USA’s 2019 ISDE World Trophy Team win.

You were injured right before the ISDE during Team USA’s previous triumph. How does it feel to finally be on the winning team?

Man, it has eaten at me for the last three years. That injury was a tough one for me, and then to miss out on the team's first ever World Championship was just a gut-buster. It was a huge goal for me to be a part of a winning ISDE team. So to go back this year and accomplish that goal was incredible for me. It was a stressful week for me, but I did my part and we got it done.

How tired are you?

Ha!  I’m smoked for sure. For ISDE there is no practice to learn the tracks, so we have to memorize it by walking everything the week before. Walking it once is good; you get an idea what the terrain is like. The second time you walk it you can remember a few turns. The third and fourth time is when it really sinks in and you can see the whole track in your head. Each test is three to five miles long, and there were nine tests total this year. Do all that silly math and we walked juuust shy of 100 miles in the days leading up to the race. Then in the actual race we ride 150-180 miles (about eight hours on the bike) per day for five days straight, with the last day being a short motocross style race. Oh yeah, wake-up call was at 5 a.m. this year. So yeah, it was tough, but 100 percent worth it to now be called a World Champion.

You had become known as a bit of an ISDE specialist in the past, based on winning the event overall several years ago. But how does ISDE jive with your current “General Sipes” program?

Every other time that I’ve done ISDE, I spent most of my year in the woods practicing for GNCC or Sprint Enduro, because that’s what I was racing full time. This year was different. Practicing for supercross, hill climb, and hard enduro doesn’t really help me get ready for ISDE. The one thing that did help was all the time I spent on the flat track. Being comfortable when I was totally sideways was a real benefit, since a lot of the tests at the race are grass track style and you have to let her step out a little. Where my practice habits hurt me is when the tests got rough and bermed up. Where in the past I would have loved that, this year I was better when there were no lines and I could slide around a little bit.

Related to that: explain how different the ISDE format is compared to most racing (motocross, GNCC, etc, where they wave the flag and tell everyone to race bar-to-bar).

The ISDE format is really unique. Of the eight hours a day we spend on the bike, only about 50 minutes of that is at all out race pace in the special tests. That’s where you can make up or lose time to your competition. The rest of the time is spent at basically a fast trail ride pace, getting to and through the time checks to stay on your minute. And, except the last day, you never race head to head against anyone. It’s just you against the track and the clock. My favorite part about the format is the pace you have to ride in the special tests. You have to push so hard and be tip toeing on the edge, but not go over it and crash. That’s a rush for me. The other unique thing about this race is we have to do all the bike maintenance ourselves. Crash and break something, and you have to fix it in a few minutes at a time check. Then at the end of every day when you’re the most tired, you have 15 minutes to change both tires (with bib mousses) and the air filter. That’s kinda fun too.

How did the week go for you in general?

I had my good days and a few not so good. Day one I was third overall and top American. Day two was bad with a 12th. Day three I rebounded for a sixth, day four another off day in ninth. Day five another sixth and day six I was third. Thankfully I had some great teammates who took up the slack when I wasn’t killing it. In years past I would have freaked out a little bit if I wasn’t one of the top guys, but this year I tried to fill the role of “old smart guy who’s not gonna blow it for the team.” I didn’t go the fastest, but I was solid and didn’t crash us out of it. Every team needs an old guy.

How's the camaraderie between teammates at this event?

It was great. I’ve been friends with Taylor Robert for almost ten years and we get along great. We see the event the same way and work really hard to be our best and figure out how to gain an edge. Kailub Russell rode really, really good this year and stayed strong through some adversity (he had to change a sprocket in eight minutes with a concrete curb for a stand in the middle of town…with no power tools. Try that someday. It’s not easy.) Stew Baylor didn’t have his best week but came through in the biggest way on day four when we needed him the most, taking fifth overall on the day. That was incredible. We all got along great and really worked as a team this year, helping each other when we were struggling. It was pretty special.

How did you guys manage the situation once you had the lead to make sure you brought it home?

That’s the thing about this race. No lead is ever safe. We all had to keep riding hard and taking chances, even though we had the lead. I’m just proud of the whole team for holding it together and being smart. We weren’t the fastest riders, but we never made that big mistake that took us out of it like so many times in the past. I’m proud to have been a part of this team. We raced the fastest guys on earth and beat ‘em. That’s pretty freakin' cool. USA baby. USA.

Finally, I’m done.  And I’ll be honest, I don’t have any energy left to put toward another race. I’m done for. But, what better way to end a crazy season than winning a World Championship? There isn’t one. I’m stoked.