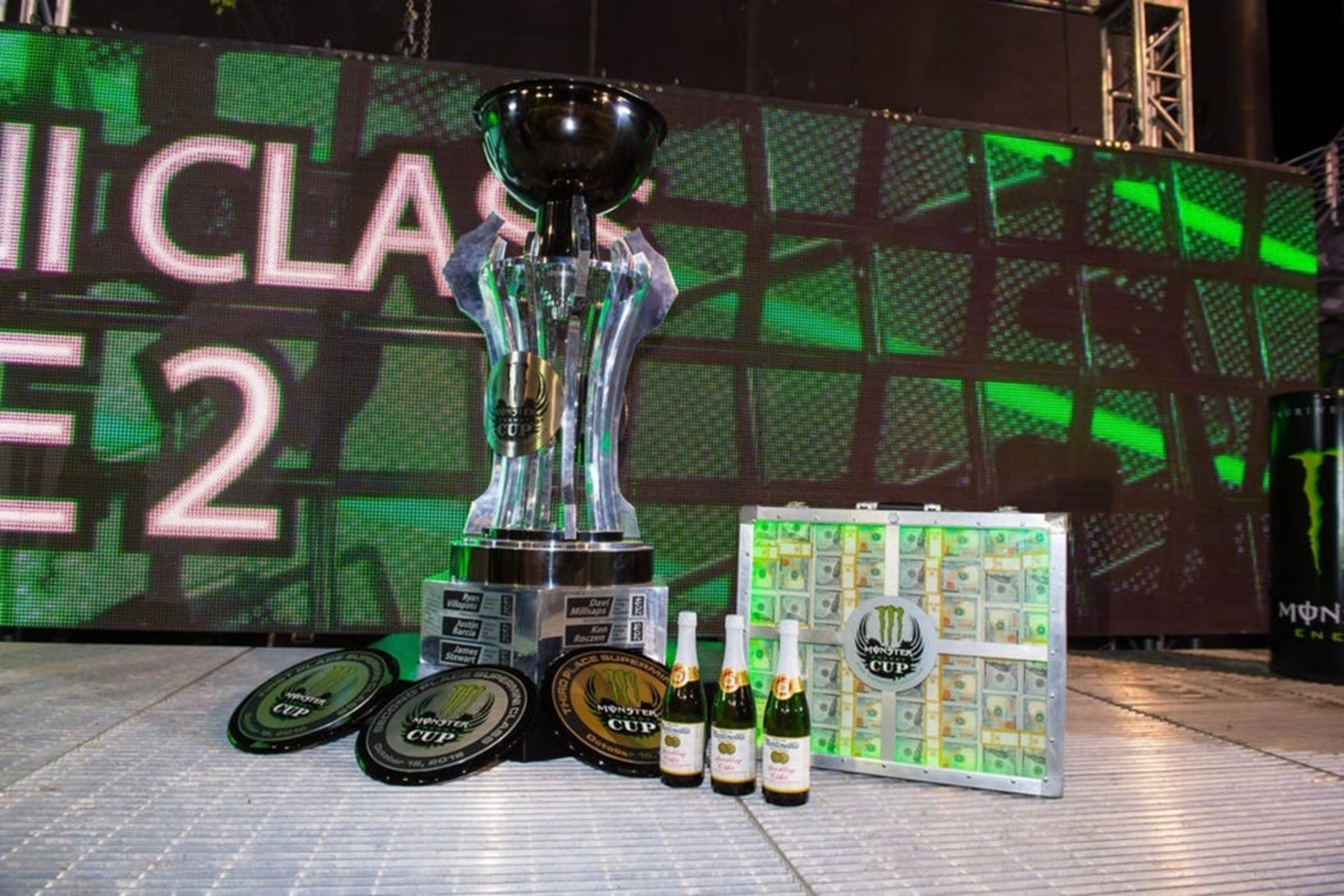 Monster Energy Cup, billed as the annual All-Star race for Monster Energy AMA Supercross, blasts off this weekend at Sam Boyd Stadium in Las Vegas, Nevada. The timing of this race, and even its predecessor, the old U.S. Open at the MGM Grand Garden Arena, always makes for interesting storylines. Some riders are jumping onto new bikes and teams, some are ready, some are coming straight off the couch. To some, it’s the final race of the season, for others, it’s the preview for what’s next.

As an example, back in 2014, Davi Millsaps made his debut for Monster Energy Kawasaki and won the event. But his actual 2015 Monster Energy Supercross season in green didn’t go well at all. In contrast, last year Cooper Webb used the MEC to make his Red Bull KTM debut. He went 6-19-9 for 12th overall. He went on to win the 2019 Monster Energy AMA Supercross 450SX Championship.

With riders and teams in completely different stages of preparation for this race, and the event itself offering major differences compared to a regular supercross, anything can happen.  We’ve literally seen just about everything at the MEC, so to prepare you for another wild night, here’s a look at some of the key names racing on Saturday night.

#1 Eli Tomac: Um, you might remember his performance here last year? Eli won the Monster Million by sweeping the event, although he only got 99 percent of the way there himself. A quick pull over by his old teammate Joey Savatgy in the final race completed the last step, and Eli scored the big bucks. Eli also won this race in 2016, but crashed out in 2017. Yup, just about anything can happen at this event!

#2 Cooper Webb: The defending SX champion won’t have his number-one plate this weekend, because Tomac is the winner of last year’s MEC. Webb missed about six weeks of riding due to a knee injury suffered at Unadilla, spent a week on a two-stroke for Red Bull Straight Rhythm, and now two weeks back on his familiar 450. We wouldn’t expect Cooper to be in mid-season form for this one, but, again, predictions are practically worthless at this event.

Update 2 pm Eastern: Webb just posted on Instagram that he's out for the weekend and will not race.

Little update for everyone. I will not be racing MEC this weekend. With only 3 days of riding on the 450 so far @ktmusa and I decided it would be best to skip this race and focus on preparation and testing for 2020 SX.

#7 Aaron Plessinger: Haven’t seen AP7 on a supercross track since his hellacious crash at Daytona. He did return for the second half of the Lucas Oil AMA Pro Motocross Championship but did not run near the front. Should be an interesting progress report on the Monster Energy Yamaha rider, who is heading into his sophomore 450SX season. By the way, way back in 2014, Aaron won the Amateur All-Stars race at this event.

#9 Adam Cianciarulo: This is it, the highly-anticipated 450 debut for AC, who will also sport his new number 9 in public for the first time. It’s also his first race operating alongside Tomac with Monster Energy Kawasaki.

#22 Chad Reed: Chad is racing this weekend, that’s not a surprise, but what he’s riding is. We suspect Chad will show up on a Honda of his own this weekend, as his old team, JGRMX/Yoshimura Suzuki, is in a holding pattern for the moment waiting on news regarding sponsorship and support. Chad has put together a quick program to at least get him through the off-season races like this one, New Zealand, Aus-X Open, and more.

#27 Malcom Stewart: First domestic supercross for Mookie since he broke his femur at round two of Monster Energy AMA Supercross back in January. He did race in Montreal a month ago—where he finished second overall.

#51 Justin Barcia: Barcia is a former winner of this event. It feels like ages ago, but don’t forget he also won the Anaheim 1 Supercross at the very start of 2019.

#64 Vince Friese: Vince tore his ACL at the Arlington supercross in February. He makes his return to supercross this weekend.

#243 Tim Gajser: The three-time FIM Motocross World Champion takes his second crack at this event. It didn’t go well here in 2017, when he crashed out almost immediately, so it will be interesting to watch his progress.

#911 Jordi Tixier: The Frenchman and former MX2 Motocross World Champion will try his hand at the event, as well.