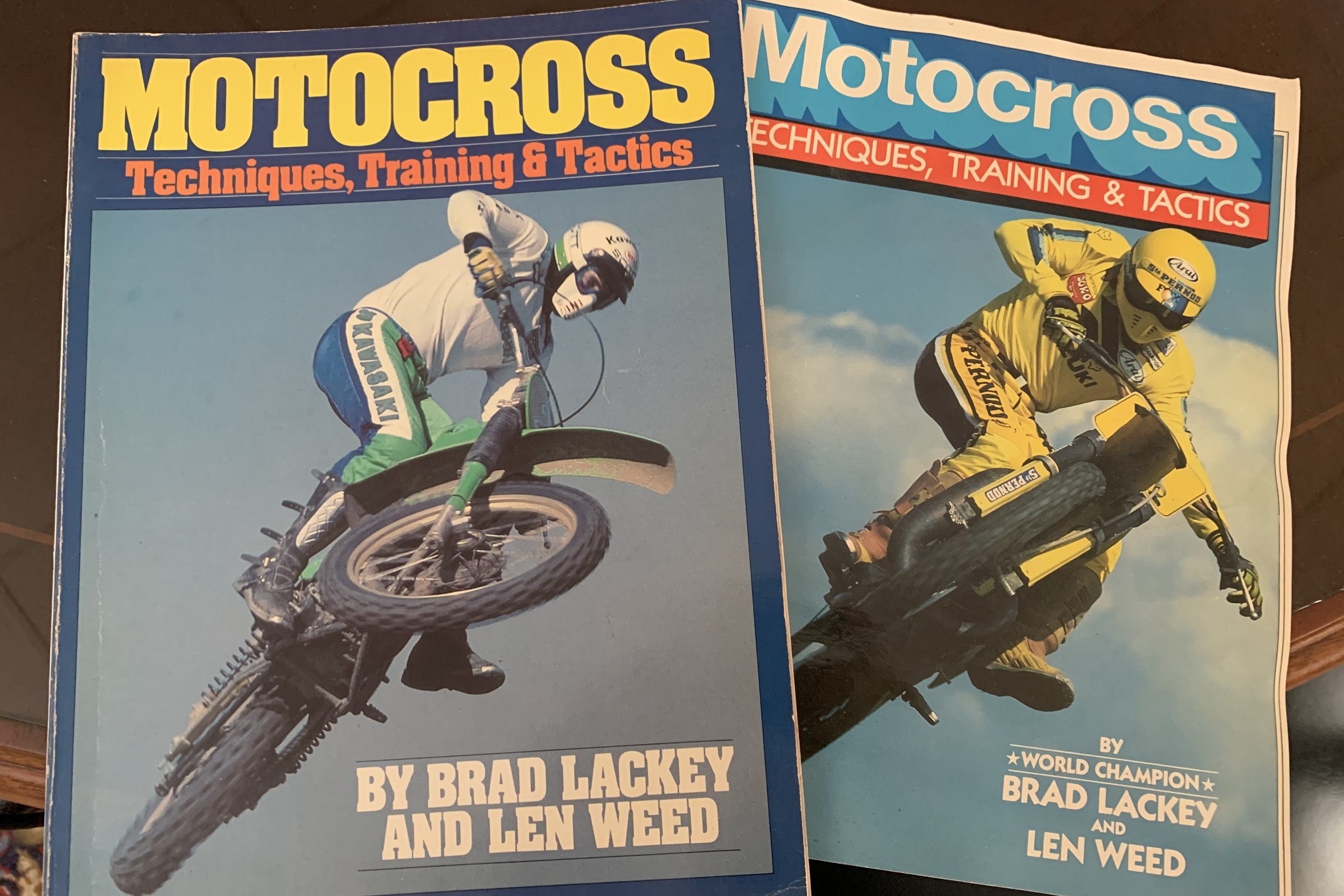 Now that we're well into the off-season, it seems like a good time to maybe read a good book about motocross. The problem is, there aren't many of them, and they can sometimes be hard to find. Fortunately, we have a library of them here at Racer X, so we thought we would pull a few out for reading suggestions. Be warned, some are very difficult to find because they are out of print, but some are as easy to find as getting on Amazon.

We will begin with the genesis of this column, and that was the news that Brett Smith of We Went Fast had come across stash of Terry Pratt's remarkable memoir of the 1972 FIM Motocross World Motocross Championship, Grand Prix Motocross, which was published in 2007. When Pratt, a longtime Cycle News executive, passed away a few years ago, it seemed like Grand Prix Motocross was gone for good. But through a little detective work and a trip to Nevada, Smith managed to get his hands on the leftover stock of these beautiful, well-written books. He's charging $40 for them, and they are worth every penny and belong in any real student of motocross history's personal library. The photos themselves would be worth the price, but the writing that Pratt did describing the events of that epic season in Europe make it even more of a bargain.

If you're looking to purchase a copy of your own, visit WeWentFast.com.

Fast forward to 2018 and the equally astonishing book Will To Victory by Roddy MacLeod, which follows the 2018 FIM Motocross World Championship. MacLeod's book is a bigger, newer, and color version of Pratt's black-and-white classic, and the side-by-side comparisons of what motocross was like then, and what it's like now, will have you going back to both time and again. The photos are incredible, and so is the insight from the likes of such legends as Stefan Everts and his father Harry, Joel Smets, David Thorpe, and more. You can get Will To Victory directly from Roddy's website, and it makes a great gift for yourself or another motocross fan in your life.

So we have a book about Grand Prix Motocross in the early seventies and one from right now. What about the eighties, you ask? We just got an advance copy of Rob Andrews' new book The Inside Line, and while we have only gotten to read a couple chapters, we can already tell you it belongs on the same shelf as the offerings by Terry Pratt and Roddy McLeod. The different is that Andrews was a 500cc Grand Prix racer himself, and he was there during another golden age of GP motocross, when the likes of David Thorpe, Andre Malherbe, Kurt Nicoll, and the late Eric Geboers and Georges Jobe ruled the roost in Europe. With photography from some of the best photographers of the era, including Sir Jack Burnicle, Fran Kuhn, Ray Archer, Adam Duckworth, and more, Andrews' tome about racing is like jumping in a time machine. His descriptions of everything from racing around The Citadel in Namur, to Hakan Carlqvist stopping in the middle of the race to drink a beer, to coming to California and racing the Golden State Series with David Bailey and friends are thorough and entertaining. The Inside Line will be available for order soon, we will keep you posted!

If you never got your hands on Motocross Techniques, Training & Tactics by Brad Lackey and Ken Weed, you're missing one of the all-time '70s motocross gems. Lackey was a pioneer in both training and technique, and his quest to be the best in the world was one of the major stories of motocross in the seventies and early eighties.

The original came out in 1979 when Lackey was still on his crusade to become the first American to win an FIM Motocross World Championship, which he finally accomplished in 1982—just in time for a newer version of the book to be released, this time when he was riding a Suzuki. You can find the newer one on Amazon, the original that we have in the Racer X Library is a little harder to find!

Jeremy McGrath's autobiography Wide Open, co-written with Chris Palmer, is a snapshot of the “King of Supercross” himself. The book was first published in hardback in 2004 when Jeremy was just past his official retirement from racing, with 72 AMA Supercross wins and seven AMA Supercross titles—all records—in hand. MC writes about everything from his first job bagging groceries to his cameo appearance in the motion picture remake of Charlie's Angels. He talks about life, racing, family and his competitors, including longtime rival Jeff Emig and the man who would take over his SX reign, Ricky Carmichael. It's a great look behind the scenes of McGrath's incredible career. It's available on Amazon.

Travis Pastrana also has an autobiography out called The Big Jump: The Tao of Travis Pastrana, co-written by Alyssa Roenigk. Like Jeremy's book, Travis gives readers a look at his career, his childhood, his challenges, and his rapid rise to fame as the world's best-known action sports daredevil. The writing is excellent and the book is full of full-color photos of all the things Travis likes to do: moto, freestyle, rally cars, jumping into the Grand Canyon or San Francisco Bay, etc. It's also on Amazon.

Travis is also on the cover of a book called The Way of the Motocrosser, along with James Stewart, that us editors here at Racer X worked on for Abrams Publishing. It features the photography of Simon Cudby and is a snapshot of the sport as it looked in 2003, back when Carmichael was on top, Jeremy and Travis were still doing the occasional race, and James Stewart appeared to be the next great superstar. There are chapters on everyone from Damon Bradshaw to Mike Brown, with a healthy dose of history thrown in. It's a coffee table-sized book and we were all very proud of it when it first came out 15 years ago. It's available on Amazon.

Our man Simon Cudby made a couple of beautiful photo books about the 2002 and 2003 seasons, called American Motocross Illustrated, Volumes 1 and 2. Both are gorgeous and include photos from AMA Supercross and Pro Motocross. This was back when Simon was still using film, and his artistic craftsmanship shows in the grain and texture of every photo in either book. Both are available on Amazon: Volume 1 and Volume 2.

If you are a student of motocross history, Gunnar Lindstrom's Husqvarna Success is a great read about the rise and fall of the Swedish brand that was at the forefront of motocross in the sixties and seventies. Gunnar rode for Husqvarna and then worked for the brand, so he had a front row seat to it all. Torsten Hallman, Heikki Mikkola, Rolf Tibblin, Bengt Aberg, Hakan Carlqvist, even Steve McQueen—they are all featured in Lindstrom's book. And so are the business problems of the brand, which pretty much went away for a couple of decades before recently being resurrected by KTM. It's available on Amazon.

And speaking of Torsten Hallman, his autobiography Mr. Moto Cross is a wonderful ode to motocross from the man who basically introduced America to the sport, as well as the businessman who pretty much invented the aftermarket industry as we know it! It's a snapshot of motocross in its infancy, and Torsten's humble tales will make you wish you had a time machine to go back and cheer him on as he was on his way to multiple FIM Motocross World Championships in the 1960s. You can order one of the books from Torsten himself.

At the same time that Hallman was on top of 250cc motocross, British racer Jeff Smith was the man leading the 500cc class on his BSA motorcycles. The Englishman wrote his own book The Art of Motocross and it's also a really insightful look at what motocross was like while it was still being called "scrambles" in Great Britain. But be warned, this 1967 book is a little harder to find than some of the other ones we've mentioned! It's available for purchase.

Another super-rare old gem is Ake Jonsson's The Technique of Motocross, co-written by Vin Gilligan. This is a book that every kid in my family (myself, my brother Tim, and my sister Carrie) each did book reports on growing up because it was the first motocross book we ever saw! Not a lot of the Swedish superstar's advice and technical suggestions would work today, but it was state-of-the-art stuff back in 1974 when it first came out! I'm not sure where exactly Dad found it, but we still have it, and you can maybe find one in good shape.

Longtime Racer X reader and motocross fan Dan Radlauer's parents Ed and Ruth wrote a series of scholastic books in the 1960s and '70s about various sports that were called the Rally Series and sold to school systems around the country for elementary and middle-school libraries. One of the real gems in the collection was Motorcycle Moto Cross School, which Dan got to co-write with his father in 1975. Before that came Minibike Challenge (1970) which we actually found online! There is also Minibike Mania, which came a little later. It's available on Amazon.