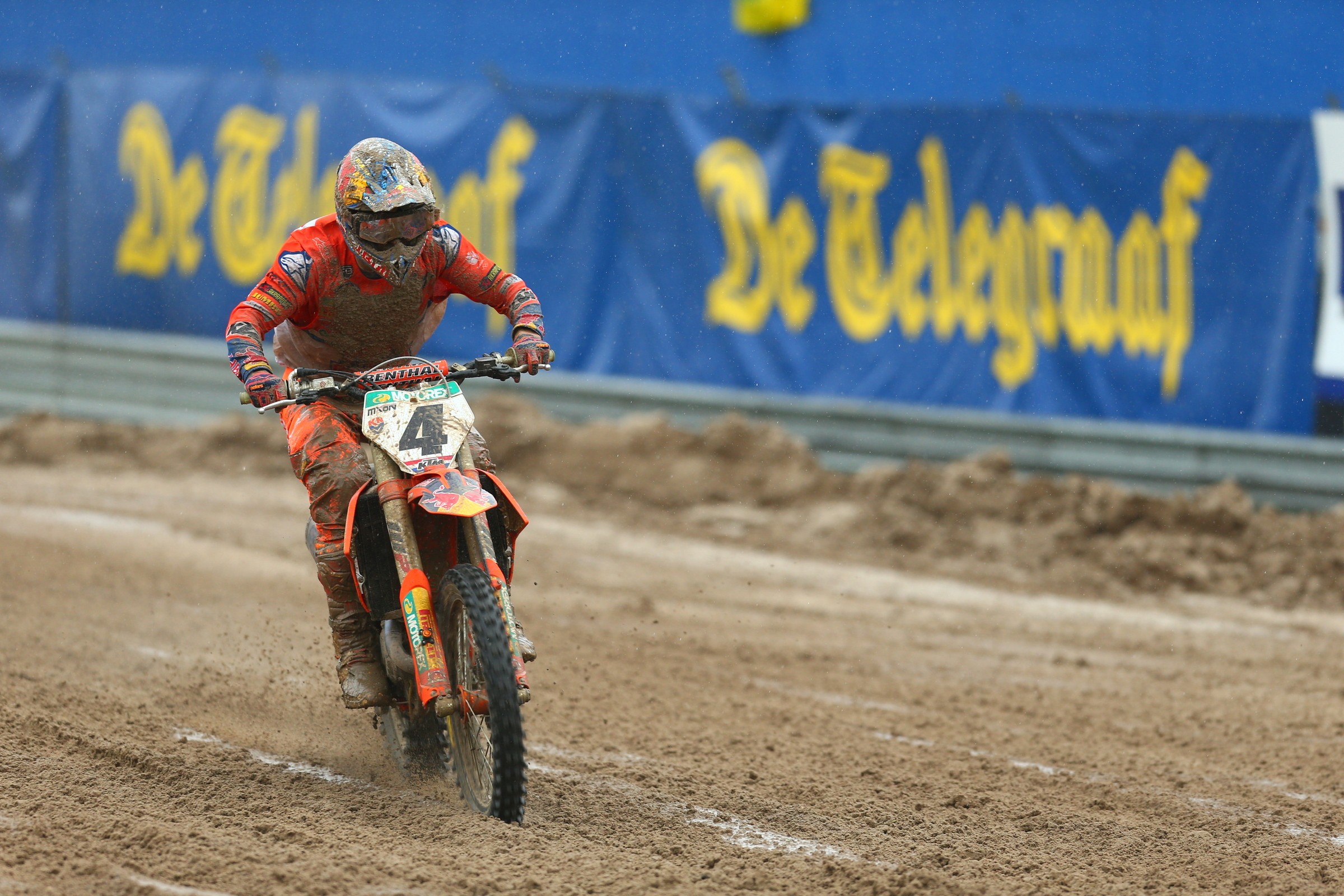 While the Netherlands has boasted plenty of great riders and world champions throughout the history of the sport, and even hosted the first-ever running of the Motocross des Nations back in 1947, somehow the European nation had never won the event. Three-straight second-place finishes only made the team even more hungry to win on home soil over the weekend in Assen.

Massive rain threatened even the favorites, but the squad pulled through to win with ease. Glenn Coldenhoff, Jeffrey Herlings, and Calvin Vlaanderen and team manager Patrice Assendelft talked about it in the post-race press conference.

Racer X: Patrice Assendelft, team manager, first of all, we joked in the press conference. Assen is in your name! You literally are the kings of Assen this weekend. You must be really, really proud of your boys and the way they performed.
Patrice Assendelft: Yeah. It’s like a dream come true. We worked so hard for this, and many months. We started living the dream already months ago, working together, having contact with each other. These guys are individual sportsmen, great sportsmen, but they function very well as a team. Also with Roan [Van De Moosdijk, reserve rider for the team], the four of them. This weekend anything could happen because of the weather. It was like a gamble before we started the weekend, but they did so well. Great performances and really functioned as a team. I’m very proud.

The first ever Motocross of Nations was held in the Netherlands at Wassenaar, just up by the Hague. Here we are 72 editions later. The first time the Netherlands have ever won in front of the king as well, no less. What does it mean to you as a team manager and as a proud Dutchman?
It means a lot. I promise you, we’re not going to wait another 70 years or something. This really feels good. At least we’ll try to defend our title next year. Our king was present today which made it very special. We’re all proud Dutchman. They all live in the beautiful province of Brabant, so you could say this is a Brabant team but it’s a Dutch team. We’re all very proud. It was very special.

Racer X: Glenn, four moto wins in a row now in the last two Motocross of Nations. Last year was a dream come true. This one, what are your emotions right now having repeated what you did last year, but doing it here on home soil?
Glenn Coldenhoff: It’s been an amazing year. First, I want to congrats also Team Belgium and Team Great Britain. They deserve to be on the podium. It’s nice to have them here. And of course the entire Dutch team. We have had some good days with rain. Of course the goal was to win. We will definitely be disappointed with something less. Glad we made it. It was very tough with those conditions. As you can see, it was an amazing weekend. We had the crowd behind us. That gave me definitely some extra. Tim [Gajser] was riding good as well. He was pushing me hard in that last moto, but I managed to get him behind me. Going 1-1 again, same like last year but this one was definitely more nice than last year because of the home crowd.

Team strategy always plays a part in this event. First race it looked like they put you up the inside, and then on the outside it didn’t really matter. You made two fantastic starts.
Normally the plan was to do everyone one time first gate pic, but after such an amazing race in the first moto we decided to put me on the inside. That definitely worked out well. Then for the last moto, we still hadn’t decided on the start line what we do. Whose decision was that? In the end we both said, we want to go first because of a good start. In the end Patrice made the decision. “You are the good starter,” and I know that also myself, but still. It was a bit difficult because I was in fifth place, I guess. Still made my way up to first. In the end it was a good decision. Well done to Patrice.

Racer X: Jeffrey, coming here, home Nations, a lot is expected of you, I guess. How do you feel about your performance, first of all? I know the team performance comes first.
Jeffrey Herlings: Yeah, there’s two sides. The weather was not in the plan. We were working hard the last couple of weeks but always in the dry. Coming here it was a completely different story. Good [weather] I think a few months, and then this weekend it was raining all weekend. I messed up my starts. Seriously, like three times yesterday we were almost complete outside so I had an excuse, but today I got twice the inside gate pick and twice I messed up completely my starts. From an individual point of view, I’m very not satisfied. Obviously first moto I almost won. The second moto even went down three times and still managed to finish fourth. So obviously a second and a fourth is not bad, but not what we wanted to come here for. We wanted to go for a 1-1. Due to the bad start and whatsoever, we didn’t make it happen. But we’re really here for is to win as a nation, and that’s what we did. Got to thank both my teammates who did an awesome job. It’s just a small country. To have won, it’s amazing.

How difficult were the track conditions here? Obviously, we know it was wet. We know it was soft. But I think personally the track crew did a great job getting the track race ready after the B final. Almost like a brand-new track every time. But it didn’t take long to break down, did it? How much did the conditions play in your mistakes or not being able to ride at your normal level?
I think they did not a great job because they kept flattening the track, so due to that, it was just like the first six, seven laps was just completely flat. You could just open it up. It was almost impossible to pass. So once it developed good again after a couple of laps, you got a few more lines. Due to the rain, I think when you flat it, it just got even more soft. Definitely after the B final it looked like a mess. I think during the day they should have just done the takeoffs [to the jumps but left the rest alone]. But it doesn’t matter. Racing’s racing. The track is what it is. Furthermore, I think for the circumstances we had and regarding the rain, it’s still okay.

Racer X: Calvin, two tenth-place finishes and second overall in the MX2 classification in the end. How good was this experience? Obviously last year was completely different, but this one is the icing on the cake and the cherry on top, I guess.
Calvin Vlaanderen: Yeah, for sure. Last year obviously didn’t go as planned. We came into this year confident and feeling ready. I think last year we should have won as well. This year obviously with the rain it was anything can happen. This morning we all sat down and we said, we’re just going to do our best. Whatever the result is, we still go for the win. Obviously with the rain and that, anything can happen. For myself, I had a pretty good day. Obviously, I wanted to win MX2, but Thomas [Kjer Olsen] was riding good and he took it both races. I think I was second and third, second overall for MX2 which is good. I was happy with that. Just happy to help the team. Obviously last year I felt really like I let them down a lot. I couldn’t see for a few weeks. Felt terrible. I’m going to sleep good tonight, I think.

Is that going to be helped by some kind of liquid refreshment?
I’m not going to say anything about that!

Going into that final race, your job was done. How nerve-racking was it for you knowing that these two had to still get a result to bring it home?
Even before the second race, they came to me and said, “You did a great job.” You just needed one good race. Normally they have two good riders, but still I wanted to do better in the second race for myself but also for the team. Unfortunately had to come into the goggle lane and change goggles, otherwise maybe I could have been a little bit higher. But going into the third moto I had full trust in my two teammates. Didn’t even stress about it at all. Glenn was riding good out front. Jeffrey, unfortunately, I saw him lying in the fence by the waves. I was thinking, he’s going to come back for sure, and he did. So for sure I had trust in them. They rode really well.