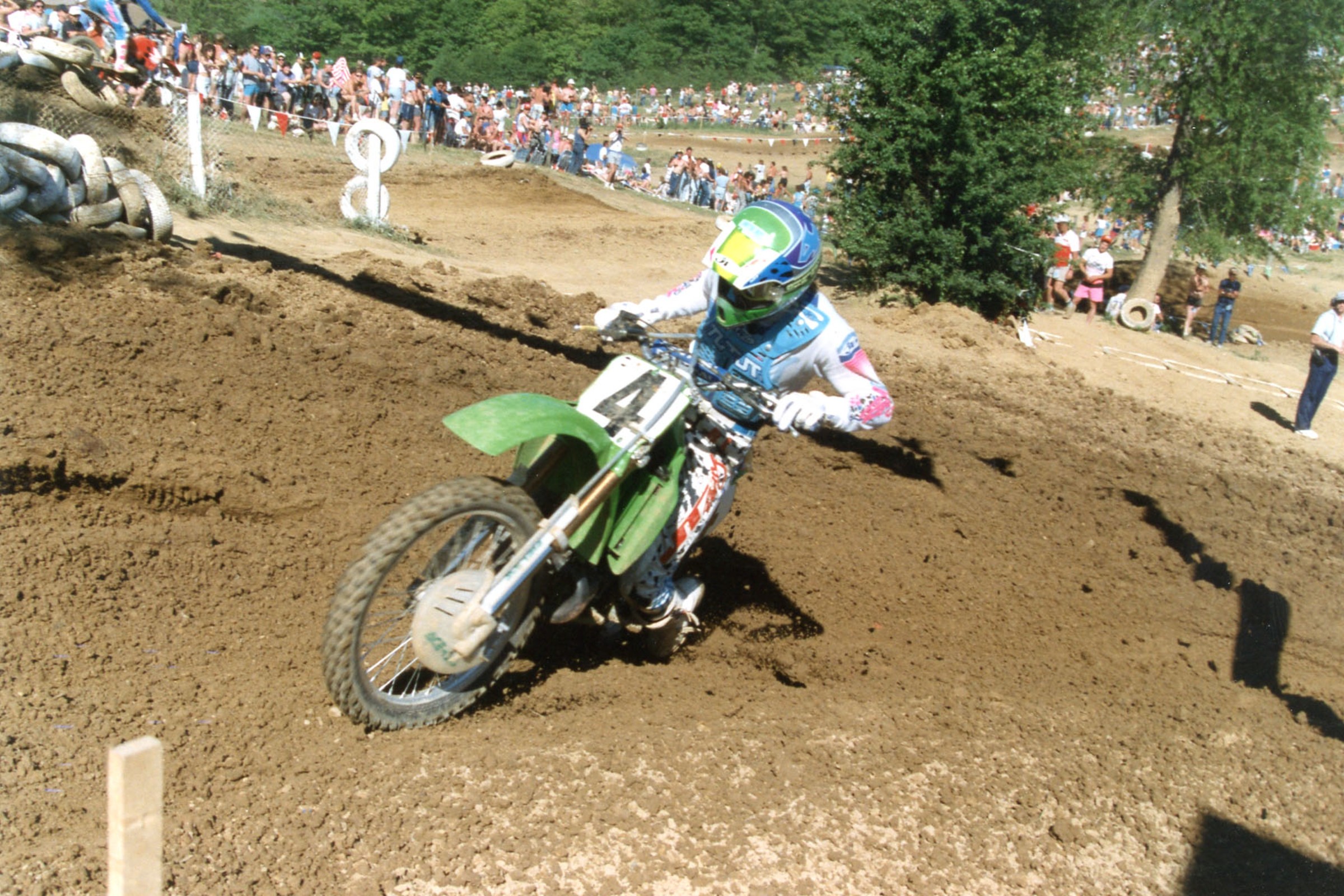 Finally! 1980's motocross fans have been pining for Ronnie "The Dogger" Lechien to gain entry into the AMA Hall of Fame for years, and that dream has come true courtesy of today's AMA announcement. Ronnie is in! (Matthes, you can step away from the edge of a tall building and put down the sharp objects. It's over. It's happening.)

Seeing the Dogger finally get accepted into the Hall has several members of our staff fired up. Steve Matthes, Davey Coombs, Jason Weigandt, and David Pingree give their reaction on the news.

We did it! When Ronnie called me with the news that he got the call that he made the AMA Hall of Fame, I immediately thought of two things. One is that it’s about time, Ronnie’s resume is awesome and he’s got a much better track record than many other riders already in the HOF and two, I’m glad a motocrosser got in after, in my opinion, a flawed voting procedure kept any motocrossers out the last few years.

Three years ago I was doing some research for a story and stumbled onto this AMA Hall of Fame website and started looking through the riders that were in there and reading some bios, etc. I couldn’t believe that Lechien wasn’t in there! So I read through the requirements, bought an AMA membership, drafted up a letter with Ronnie’s accomplishments and submitted it for consideration.

The only real strike against him was the length of his career as his competitive years in AMA SX/MX lasted from ’83 to ’89 before he badly broke his leg at the end of 1989. But look at what he did in those six years!

It was a slam-dunk, or so I thought. But after three years of no go for Ronnie, I heard through the grapevine that he was close in the votes but there just wasn’t enough motocrossers with lifetime AMA memberships to vote him in. It was bizarre and frankly, pissed me off. As I said there were many racers in there without the accomplishments of Ronnie. I tried, people! I tried really hard! I even did a podcast with AMA Hall of Fame board members Broc Glover and Tom White (RIP) to try and get the word out and get to the bottom of what in the hell was going on with the voting.

The best part of all of this that Ronnie, who went through some dark times after he hung up the boots, is doing well these days working at the family business of Maxima Oil and still rides very fast. So he's doing well, but he deserved this, and now it's finally happened.

Awesome news for Lechien and his family and congrats Ronnie, better late than never!

Congrats to the Dogger! Ron Lechien @thedogger4 was voted into the AMA Motorcycle Hall of Fame! Well done @pulpmx and @wewentfast and @dcracerx and everyone else who pushed for Lechien... #supercross #motocross #thisismoto #moto @ama_racing @ama_racing @motorcyclehalloffame

I used to tell people Ron Lechien sent me to college, and in large part that's true. It happened sometime between August 1981, when we first raced together at the AMA Youth Nationals in Rolling Hills in Reidsville, North Carolina, and the 1983 Orlando Supercross in Florida. Let me explain: In North Carolina we were racing in the 100cc and 125cc Schoolboy classes, and we both did pretty well. Lechien won the 100cc class and I got third, and in the 125cc class we were third and fourth, respectively. I felt like I was competitive with this hotshot California kid that was already popping up in Cycle News and Motocross Action.

Fast forward to less than two years later. I am an 11th grader at University High School, hoping to qualify for the Loretta Lynn's AMA Amateur Nationals. Ronnie Lechien was not. He was already done as an amateur. At age 16 years old, he stepped right into a Yamaha factory ride, winning the Orlando Supercross as a rookie on a YZ250! One week later at Lake Whitney, Texas, he won his first AMA 125 Pro Motocross National. He had progressed like a lightning bolt. Looking at Ronnie's rapid rise compared to my own progress, I realized that college might be a better career path for me!

Of all the natural talents I've seen along the way Lechien may have had the most talent of all. His effortless style, his creativity on the motorcycle and his pure speed were a nearly unbeatable combination. For his competition, anyway. And he could ride anything well: 125s, 250s, 500s, in the mud, sand, on hard-pack, indoors, outdoors, anything. And besides that, no one looked better in a JT Racing kit than "The Dogger," to whom I once felt the need to explain that they called him "Dogger" not because of his laidback style and attitude, but because le chien means "the dog" in French. Surely he knew that after going to West Germany in 1985 and France in '88 and dominating his classes for Team USA at the Motocross des Nations!

We recently did a list of Lechien's "Greatest Hits of the 1980s" and there were plenty, if you want to check them out.

Ron Lechien grew up in the time of Bailey, Barnett, Ward, Johnson, O'Mara, Glover, Dymond, and more, but his toughest competition came from himself. If he only had the discipline and self-control to match his remarkable talent, the record books of that era would look much different. Later on, as the speed diminished and his partying took their toll, Ronnie's career became something of a cautionary tale. It wouldn't be until Jason Lawrence came along where we could see such a wildly talented rider live such a wildlife, and while J-Law could ride, he was no “Dogger” when it came to pure talent.

I truly believe that had Ron Lechien led a calmer life he would have many more titles than the one AMA 125 National Championship he won in 1985, which happens to be the year I went to college. Thanks Dogger, and congratulations on your very well-deserved honor of finally going into the AMA Motorcycle Hall of Fame.

Like a lot of moto fans in their 40s, the 1980s hooked me on the sport. There were so many talented riders that you never really knew who was going to win on any given weekend, a formula that hasn't really been duplicated since. Ward, Johnson, Bayle, Stanton, O’Mara, Hannah, Cooper, and more... Each rider had their strengths and weaknesses, but there was only one Ron Lechien. “The Dogger's” style, on and off the bike, made him a fan favorite. I always appreciated Jeff Ward's work ethic, determination and professionalism, but I couldn't help but admire the way Ronnie could cruise into the track late, miss practice without stressing about it, and then crush everyone his first time out on the track; and that happened more than once. When Lechien's raw talent was on display, it was awesome to watch.

Of course it wasn't always standout performances, and those bad times certainly took a toll on Ronnie's career. His substance abuse issues were well-documented and have become lore in the sport. Love him or hate him, “The Dogger” was an easy pick for the AMA Hall of Fame. I don't quite understand how it took this long for him to get inducted considering his statistics, but I'm thrilled he's made it in.

Congratulations, Ronnie... this was a long time coming, and very well-deserved.

Because Ron Lechien's prime time as a racer is now 30 years past, we've lost a little too much memory to history. So there are two points I feel need to be made about “The Dogger.” The first is, whenever a "most naturally gifted ever" conversation comes up, Ronnie's name absolutely has to be part of the conversation. Surely James Stewart or Jason Lawrence come to mind because they're more contemporary and there are now fans too young to have seen Ronnie ride, but if you're having that conversation, you have to put Lechien in it, because trust me when the dude was on, he was amazing. Also, just have a look at some of the photos and videos of Ronnie from back then. Look at his style—he looks modern! A lot of 1980s guys were still hunkered over the back of the bike, trying to prevent their rudimentary (by today's standards) suspension from kicking them over the bars. Or maybe they just knew if they rode too far forward back then you could probably snap forks or frames? Well, somehow Ronnie made it work, though—he rode over the front, he jumped and landed front-end down, but he did it with a smoothness and grace that allowed him to get away with it. He was ahead of his time with style, and that comes from talent.

We do also know that Ronnie didn't train hard enough and had too much off-track fun to take those talents to the absolute top. For those that remember this, it seems like a bad-boy tale. So here's my second point. There's one key distinction you have to make, with Ron Lechien. Ronnie might have been bad to himself, but he was well-liked by his fellow racers. Talk to guys like Jeff Ward and David Bailey, and they have nothing but love for the guy. Okay, there was one famous incident with Ricky Johnson that led to a scuffle, but I think that one gets chalked up more to two young, talented guys from the same town having a bit of a rivalry. Ronnie sure seemed like a genuinely nice guy then, and still is today. The Jason Lawrence comparisons always get brought up with Lechien, but that's not really fair to Ronnie. Lawrence talked trash and hated on his competition. He was rude and disrespectful to others. Ronnie wasn't any of those things, as far as I know. He had bad habits but he was a good dude. That's a key distinction to make. Congrats to him on getting the love and making the Hall.