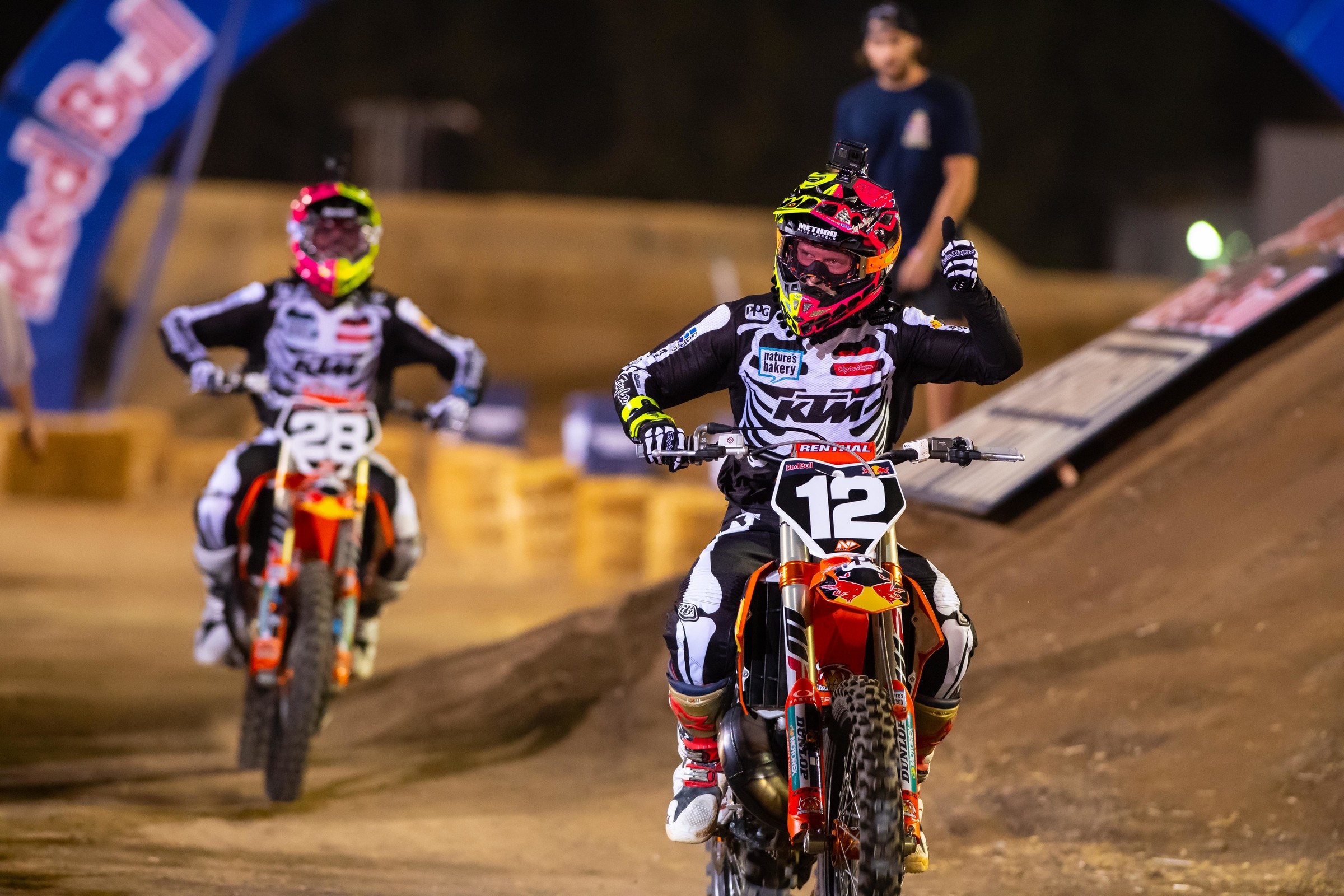 This is the sixth year of Straight Rhythm, an event that started with the singular gimmick of “unwinding” a supercross track. Remove the turns and leave the obstacles. It promised short, close racing and also a more level playing field. Fitness, for example, really didn’t even matter. It was cool for a bit but started to grow stale on 250Fs and 450s. What really caught the eye, honestly, was the controversial entry of Ronnie Mac, up until that time nothing more than a YouTube character, but actually competing in person on his 1998 CR250R. Ronnie actually went fast while gooning on the track, and the fans loved it. The Ronnie risk might have been a bridge too far, but it was also enough to bridge to a whole new look for the event. By the next year, a two-stroke class was added, Ryan Villopoto entered it on a KX250, Mac returned and battled Gared “Stank Dog” Steinke in the finals. We’re pretty sure Marvin Musquin won the 450 class that night. No one cared. They wanted more two-strokes!

So four-strokes were eliminated completely last year, and the event took on a, as Red Bull PR says, “love letter to the ‘90s” theme. Retro is so hot in modern times, especially when it comes to two-stroke dirt bikes.

Yep, it’s a two-stroke fever dream. Here’s Red Bull’s official word on the rider lineup and the event, which runs October 5, 2019, at the Fairplex in Pomona, California. Below is the full press release:

Santa Monica, Calif. (September 9, 2019)—It’s just about that time of year again – the Supercross series is long gone, the outdoor series has just ended, and in the ensuing 5.2 minutes of free time, the stage is set for the most unique, irreverent and fun race of the season, Red Bull Straight Rhythm.  The event has become known not only for its head-to-head, straight-line format, but also for its “love letter to the ‘90s” theme, which sees riders mixing gas and hauling ass down the ½ mile course on two-strokes while donning vintage-styled gear.  Last year the event established the all two-stroke format, and this year the retro fun continues with one of the strongest initial lists of riders ever to hit the track.  It all goes down on October 5 at Fairplex in Pomona, CA and tickets are available at redbull.com/straightrhythm.  Those that can’t make it out in person can still get a virtual whiff of race gas as the event airs live on Red Bull TV.

When the event went all two-stroke last year, it caused some top riders to pause, as no four-strokes meant no factory bikes and no factory support –simply terrifying for a top rider.  But those intrepid riders who showed up anyway were rewarded with an enthusiastic crowd, exciting, close racing, and one of the best vibes around.  Turns out those that didn’t attend apparently regretted it, as this year the FOMO seems to be taking effect, with riders lining up to secure a spot - both previous competitors as well as those brand new to the event.

From the full field (exact number TBD), qualifying will determine which sixteen riders advance from the 250cc class and which eight from the 125cc class.  And new for this year will be a special exhibition race for two gargantuan 500cc two-strokes, expertly wrassled down the course by Tyler Bowers and Travis Pastrana (who returns to the event for the first time since 2014).  Also for the first time, two Supercross champions will try their hand at the event: reigning champion Cooper Webb and 2018 champion Jason Anderson.  Ken Roczen, Cole Seely and Marvin Musquin will also all return to the event after missing the last few years.  Ryan Sipes, the ultimate generalist himself, has seemingly raced every single 2019 motorcycle event, so he will definitely be there.  And fear not, this influx of new / returning riders will still leave just enough room for the larger-than-life personalities of fan favorites Ronnie Mac and Gared “Stank Dog” Steinke…because honestly, you know they would show up even if they weren’t invited. Twenty-seven riders are now confirmed, with more to be announced shortly.

Despite the bike changes, the concept remains the same.  Line up side by side and race head-to-head down a ½ mile of rollers, whoops, doubles, tables and all other kinds of rhythmic insanity.  Racing is a best-of-three format, so each rider gets at least two chances to grab victory.  In its sixth year, the event will continue the format where practice, qualifying and racing will all take place on the same day, with the finals taking place at night under the lights.