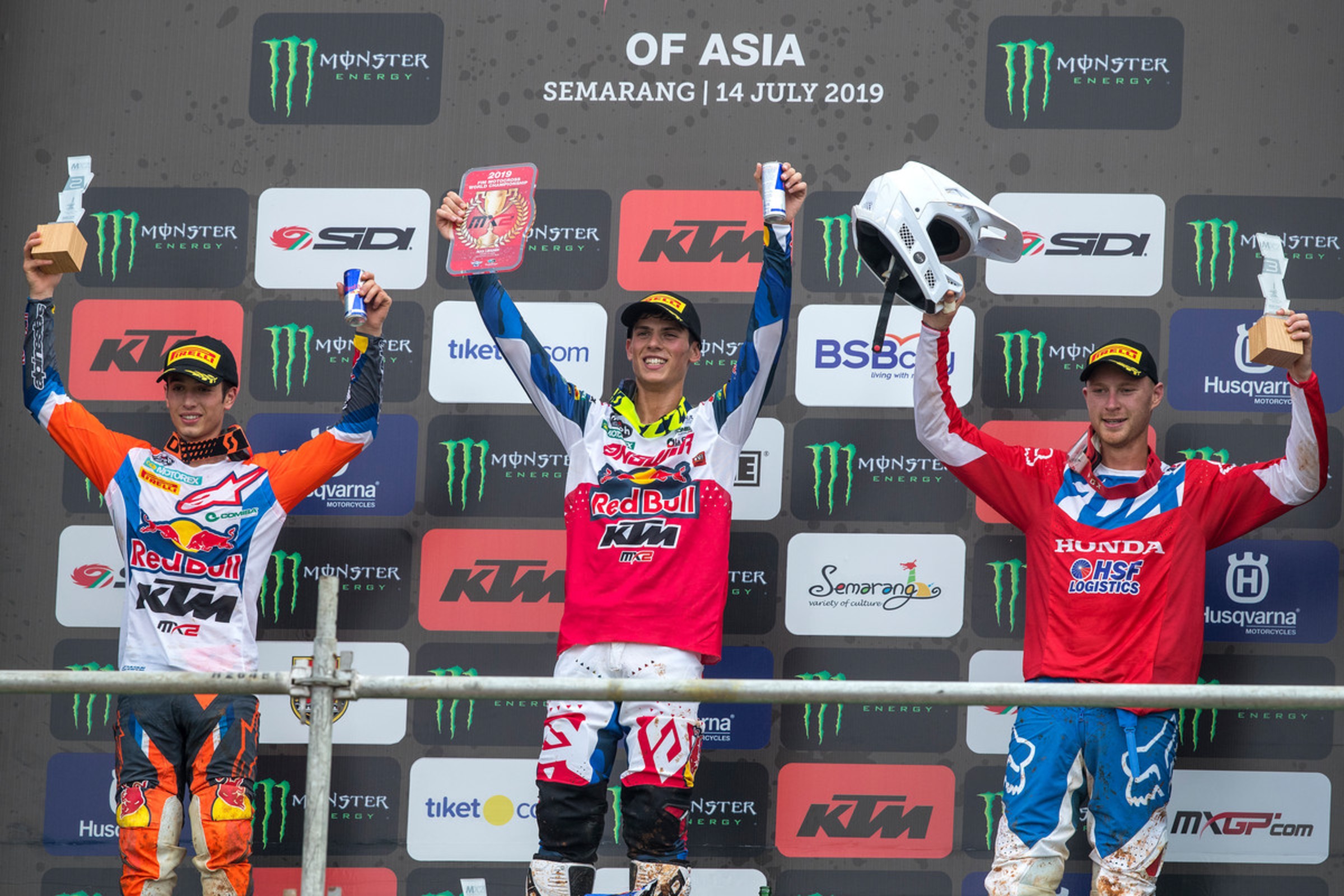 GP Report 3 Assessments From the MXGP of Asia

The FIM Motocross World Championship completed an Indonesian double-header with the second Grand Prix to take place on the rutty red hard-pack of Semarang. Here are three takeaways from round 12 (of 18) in MXGP.

Honda HRC’s Tim Gajser can now start to count the weeks, days, and motos towards a second MXGP crown and the third of his career. A straight forward 1-1 at Semarang—his fifth win from the last seven rounds and his eighth overall MXGP win of 2019—was achieved while setting another new record: TV commentator Paul Malin highlighting the fact that the Slovenian’s seventh success in a row was a new longest streak for a Honda rider in FIM world championship history (and there are some very dignified names on the HRC roster).

Gajser eased into his position of superiority with the same set of ingredients that have helped towards the previous six triumphs: bright starts, unflinching early speed, and then a measure of control and race management. This was mastered in spite of a tweaked and painful ankle picked up in timed practice on Saturday. Semarang—faster, wider, longer, more slippery, and arguably more treacherous than the new Palembang course the weekend beforehand—was not for the fainthearted. The vast jumps and rutty sections coupled with the empty spaces in the gate through the harsh rate of injury absence in MXGP reminded riders that a degree of caution was also a measure of performance at this Grand Prix.

The 21-year-old Gajser let the Monster Energy Yamahas squabble for podium places behind him (that’s now six rounds where YZ450Fs have filled the other two steps on the box) and was satisfied to bank another host of points and stretch his margin to 177.

With six rounds to go and a clear lead for race wins ahead of next nearest rival Romain Febvre (15 to the Frenchman’s 1), a 27-point gain in two weeks time in the Czech Republic means Gajser can realistically start to think about a championship party at the next event in Lommel on August 4 (round 14 of 18). If the Slovenian continues to enjoy the best of the rub, then toasting a second title by round 14 and four fixtures before the culmination of the season would be another new MXGP record.

Swiss duo Arnaud Tonus and Jeremy Seewer earned their sixth and third overall podiums of the year respectively at Semarang. For Monster Energy Wilvo rider Tonus, his runner-up result represented a return to the top three after a ‘blip’ in Palembang and he is now tied with the absent Tony Cairoli for podium finishes; thus standing as the most consistent rider in MXGP behind Gajser’s mammoth 11 podiums, 15 moto wins (Tonus has yet to take one) and eight overalls. It’s not hard to understand why Gajser has his hefty advantage.

Standing Construct KTM’s Glenn Coldenhoff and Max Anstie (both in the top five again) gave KTM some welcome presence at the top of the leader board and the beleaguered satellite team some overdue solid results while Arminas Jasikonis continues to strive for an elusive first top-three finish for Rockstar Energy IceOne Husqvarna and should perhaps have earned a podium appearance by now.

Since his multiple-crash nadir at Mantova for round five, Gajser has been the picture of regularity and his confidence prospered with two key defeats of Cairoli soon after the Italian misstep. Since then he has been on a roll.

Seewer’s second podium in a row allowed the 24-year-old to move past Cairoli and up to second place in the championship. Semarang was already the third MXGP fixture without the stricken Sicilian and therefore provided an indication of how the rest of the premier class pack needs to lift their results to get anywhere near the level of the Red Bull KTM man and Gajser.

“I’m so happy about how the season is going and couldn't wish for better,” Gajser said. “It is definitely sad that Tony is not here, and I wish him a quick recovery. For me the goal was to have fun at each GP and not put pressure on myself.”

Yes, the 2019 title is floating firmly towards the HRC awning and Gajser knows the strength of his opposition has taken a firm hit but it would still be foolish to assume MXGP is already over. Jeffrey Herlings lost MX2 titles in 2014 and 2015 despite 100+ points advantages, so the unbelievable is still possible.

Red Bull KTM’s Jorge Prado now has 11 wins from 11 contests he’s competed in (nine of those being 1-1 scores) and would perhaps have a perfect record if he hadn’t have missed the British Grand Prix with an injured shoulder. Unlike Gasjer, Prado has had to cope with the constant presence of riders like Rockstar Energy Husqvarna’s Thomas Kjer Olsen and Monster Energy Kemea’s Jago Geerts and, of late, his own teammate Tom Vialle. Semarang was disappointing for Olsen (tenth overall with a second-moto crash) and Geerts (ninth) and therefore the Spaniard pulled away to the tune of 78 points.

There was little to dispute the 18-year-old’s dominance at Semarang, and even if Prado is struck by misfortune at some point in the rest of 2019 it is hard to see him retaining the motivation to trample over MX2 in similar fashion again in 2020. If he goes on to wrap the MX2 title, then he has to climb on a 450 SX-F anyway. Only in recent weeks has #61 started to openly talk about the prospect of MXGP and competing alongside Herlings and Cairoli at Red Bull KTM next year.

MX2 is currently providing relief for the Austrians with their MXGP wing in tatters. In Indonesia, the factory could not have asked more of their 250cc athletes and material. Prado was followed onto the podium both in Palembang and Semarang by rookie Vialle as the 18-year-old Frenchman opened his fifth bottle of champagne this year and climbed to third place in the standings.

Vialle’s emergence is more encouraging news for the French. Former European Champion Mathys Boisrame has also breached the top three this season (at the MXGP of Germany) and ex-125cc ace (slowed in his development by a broken arm) Maxime Renaux on the SM Action Yamaha was again among the leaders in Indonesia; his second place in the second moto marking a career-best so far in his first full MX2 season.

There are shoots of talent popping through in MX2. Prado’s superiority and the presence of only two other GP winners in the class have led to comments that MX2 is at a lower competitive level compared to past years. The class is definitely in transition, and at least five of the top 15 riders will age-out for 2020. One of those is Honda HRC’s Calvin Vlaanderen. The South African/Dutchman won at Semarang’s inauguration in 2018 and despite only competing for the second time after his leg injury he did enough to again appear on the box in third place. This year, Vlaanderen’s absence, Mitchell Evans’ irregularity in an eye-catching debut campaign and errors and glitches from Henry Jacobi, Geerts, Ben Watson, and Adam Sterry have only helped Prado.

For all the consternation about new-build tracks and the ‘transportation’ of MXGP to far-flung territories round 13, will take the series back to a venue that is the definition of ‘old school.’ The narrow and weaving layout at Loket will stage the Grand Prix of Czech Republic (on July 28) and a circuit with decades of FIM World Championship pedigree.