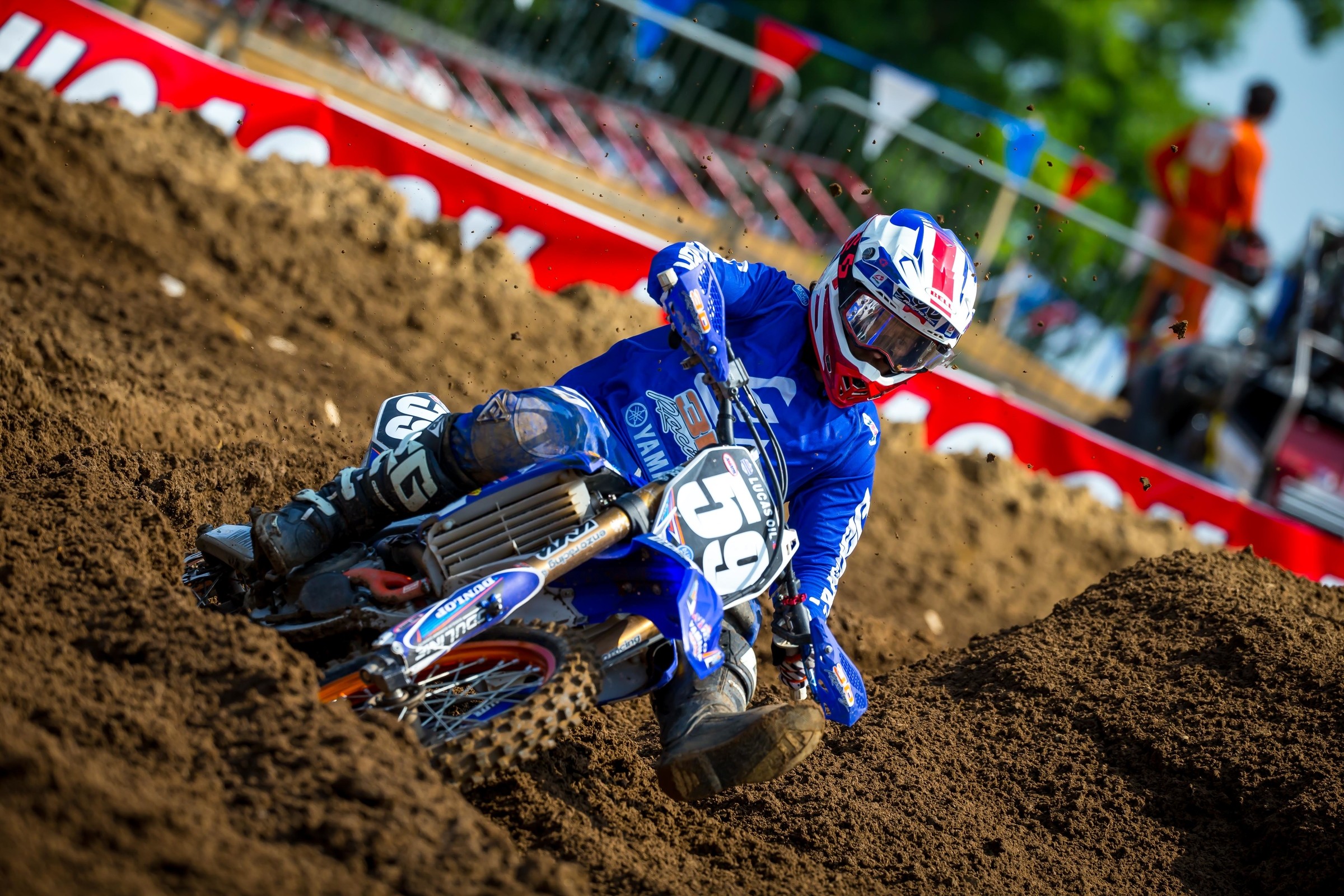 Nick Gaines has seen what it’s like to experience success in his racing career. Touted as one of motocross’ elite riders as an amateur, the 3D Racing rider has learned that success is now measured differently in the professional ranks. As a rider not on factory equipment, a finish inside the top 15 is considered a successful weekend. Gaines’ goals seem to be on par with that of many privateer riders—keep improving and try hard to earn a top-ten finish. Having scored top-15 overall finishes in the 250 Class at Southwick (17-10 for 13th overall) and RedBud (13-18 for 15th overall), the rider out of Georgia looks to keep improving and to work hard during the week off in hopes of putting the #59 Yamaha where he wants to be.

We caught up with Nick this week to chat about his finishes, training with Ezra “Yogi” Lusk, and more.

(NOTE: The following interview was conducted via iMessage and has been lightly edited for clarity.)

Racer X: Nick Gaines, congratulations, you’ve been selected for this week’s Privateer Profile. What are you doing right now?
Nick Gaines: Thank you very much, it’s awesome getting it! Right now I just pulled up to the house from a day training with Ezra Lusk. It’s hot out here in Georgia. [Laughs]

Woah. Lusk?
Yeah, it’s awesome being with him three days a week. He’s got classes he does Tuesday-Thursday 10 a.m. to 3 p.m. It’s been awesome working with him this year, he knows so much and he’s been pushing me hard during the week. Just been trying to take it all in and use it on Saturdays!

Suddenly your stellar rides all make sense now. [Laughs]
[Laughs] For sure! It’s awesome mixing it up with these factory boys on the weekends. I still need to get a start, I’ve really been struggling getting in with the front group of the beginning of the race. But I’m really happy with everything going on with speed and fitness.

You’re happy, but is Yogi?
[Laughs] He wasn’t happy with the second moto this weekend at RedBud. He sure made me pay for it today! It’s going to be a long two weeks for me I’m guessing. [Laughs]

Let’s talk about your motos. Even if moto two at RedBud wasn’t excellent, you’ve still finished in the top 15 the past two rounds.
Yeah, definitely. First moto I was okay with it because I came from a ways back and just picked good guys off at the end there and moved up to 13th. Second moto on the start I don’t know what the heck I was doing on the gate drop, but it was awful. But still I was charging and put my head down and got up to 15th or something before I ended up going down pretty hard and hit my head, [Derek] Drake and I came into a turn side by side and it was just about who was going to let off first. Unfortunately for me I made the pass but came into the turn wayyyy too fast and launched a single and my front end just tucked on me and threw me over, the bike ended up coming down and hitting my head. Couldn’t really seem to get into my groove the last six or seven laps, so it wasn’t good. I couldn’t make more passes.

Is that kind of your mentality? “You’re on a factory bike, if you want to go around me let’s see who holds it on longer?” When you’re racing in the top 15 like that?
No not really, I mean I know I want to beat as many factory bikes as possible. I’ve just been focusing on myself and doing the very best I can every single moto. I know my best with a decent start is a top-ten for sure. I just need to make it happen more than I do.

Is that the goal you and the team around you have for yourself? Finishing in the top ten?
Bill, the owner at 3D [Racing] has been really cool and supportive but yeah him and Ezra and a couple other people have been pushing me saying that I can do it and be a solid guy up there. Makes me work harder because I want to be up in the single digits so bad, I can’t stand it.

A lot of privateers we talk to seem to have that common goal. What is it about being in the top ten that makes privateers want in so bad? Just a rewarding feeling to be in the “elite” group?
Yeah for sure, just that feeling of everything coming together. Getting a ninth place or better right now with the depth of the 250 Class is something to be proud of. My goal will always be the same to keep pushing forward and maybe being a factory guy and getting holeshots and leading laps, that’s the dream. Keep improving.

I was just looking at your Instagram and had a thought. Often in our sport we see riders who were top amateurs, and winning races at Loretta’s and stuff like that. You tasted success and winning as an amateur, what does that do to a rider when you jump into the pro ranks and suddenly success is measured differently?
Yeah, having a successful amateur career was great. I was blessed with being with Cobra and then with Monster Energy Kawasaki Team Green for 11 years. The thing about amateurs is there is only three to four bad dudes in a class it seems like and it’s all about sprints. With the pros there’s about 20 guys that have won titles and been a stand out amateur. With me, I came into the pros and got 11th place my first moto but I just couldn’t stay healthy for a year, so I would have to come back and rebuild everything and try to keep improving through the season you know so maybe I can put all that behind and really get some momentum on my side and keep it rolling. I know I’m putting the work in and gaining my confidence again.

And with that we’re back to Ezra Lusk, training with him has to be very educational. Aside from kicking your ass this week, what’s he like to work with. Walk me through your day today.
[Laughs] He’s kicking my ass weekly for sure! He’s an awesome guy, knows so much and I’m trying to be a sponge taking it all in! Today was more of a moto day so we broke the track in and did two practices and then two 30+2 motos. Every day is different, track is different, we work on different stuff, monitor heart rate, and every lap is on the watch. Just having him has taken the questions I ask myself away if I’m not going hard enough, or when I need to back it down.

Does he moto with you? Are you out there alone? So many questions!
I’ve been trying to get him to ride with me! He has a Honda 250F but he doesn’t ride, he focuses on us at the track. Also to road bike or mountain bike with me even though I would get smoked. [Laughs] There’s kids there that ride with me, some are getting ready for Loretta [Lynn’s] and some just want to get better for the weekend races.

Getting better: That’s the consensus always, right? Let’s wrap up with this. By the end of the season, what do you hope to “get better” at the most, so that you can confidently say 2019 was a successful Pro Motocross season for you?
Always to get better, no matter what it may be! For me I would like to get inside the top 10 on a start and just ride my best and I think I will surprise myself. Either way, I just want to be a solid guy and to be up there battling and be someone that teams can invest in.

Sounds like a good plan. Anyone you want to shout out before you go?
Yes, for sure! A big thank you to Ezra Lusk, my trainers in the gym Brandy and Gina, 3D Racing Yamaha, Enzo KYB, Answer, EVS, Scott goggles, Kris Swaney, and just everybody that helps me out!