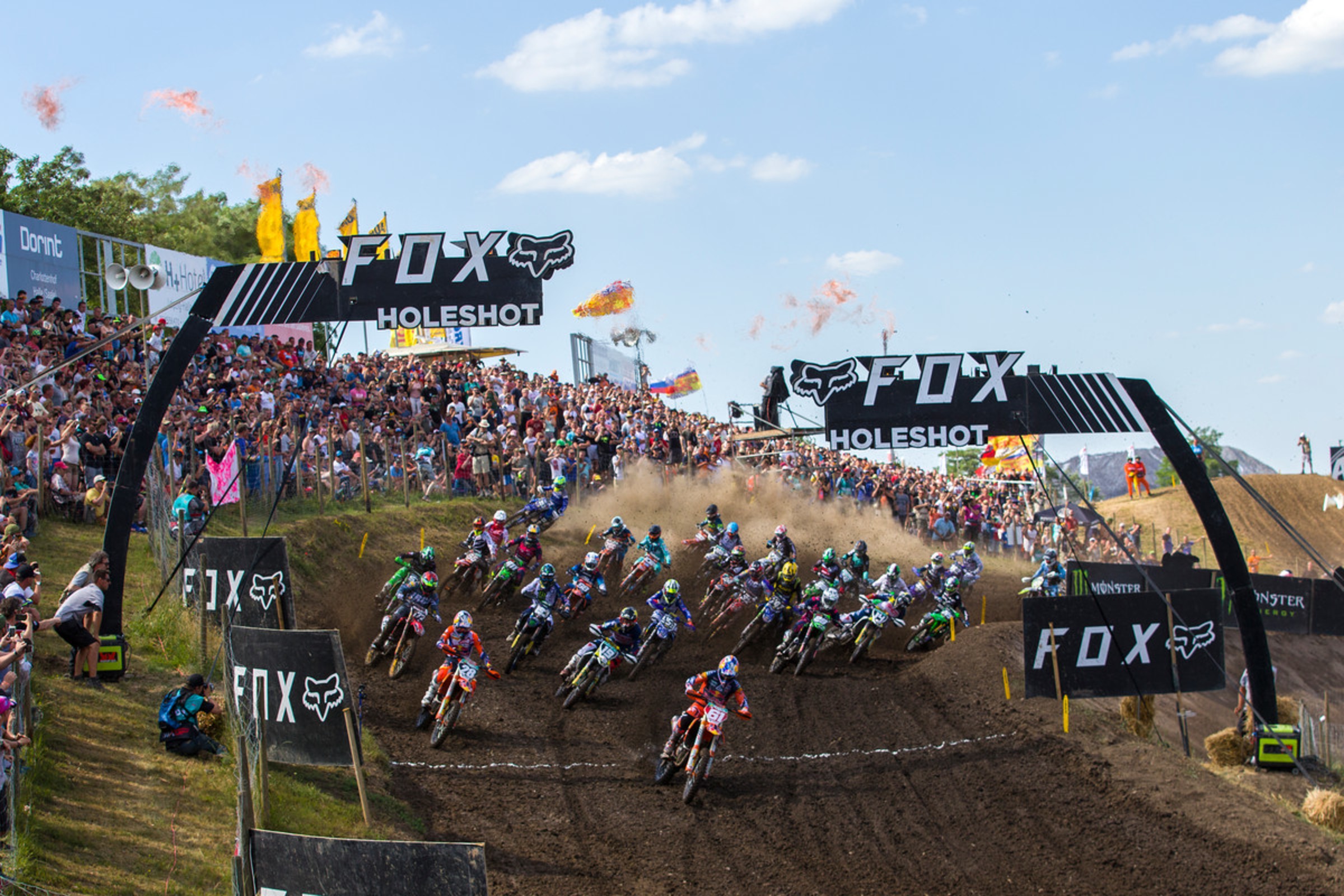 GP Report 3 Takeaways From the MXGP of Germany

Round ten (of 18) took the FIM World Championship into the fearsome bumps of the former FIM Monster Energy Motocross of Nations venue (2013) and the staple home of the German Grand Prix since the beginning of the century (with occasional departures to Lausitzring and Gaildorf a distant memory). A substantial list of injuries prior to the sixth round in seven weeks was lengthened with Monster Energy Kemea Yamaha’s Ben Watson (fifth in the MX2 standings) breaking his hand in free practice and Monster Energy Kawasaki’s Julien Lieber smashing his left elbow after tumbling out of second place in the first MXGP moto.

Here are some of the other notable occurrences or topics to emerge from the carved Talkessel hard-pack.

For the third weekend in a row HRC’s Tim Gajser and Red Bull KTM’s Jorge Prado claimed overall wins and with 11 from 12 motos bagged in both classes between them. Gasjer stretched out an 83-point gap over the absent Tony Cairoli (at least three motos) and Prado made another gain over Thomas Kjer Olsen, who missed the MX2 box for the second time this season, to sit 44 points ahead.

The championship leaders prevailed largely on the strength of their starts. This was an essential asset at Teutschenthal as the narrow and rough hard-pack—littered with axle-deep ruts thanks to pre-event rains, a fair amount of terrain-ripping and constant watering, sometimes in questionable places –was not generous with overtaking opportunities. Talkessel was technical, slower than usual and awkward.

“It is more like enduro, and you need to find a balance between smooth and fast,” said overall runner-up Monster Energy Wilvo Yamaha’s Arnaud Tonus. “If you overdo things then you’ll just crash or make mistakes and go slower.”

Despite his obvious superiority in topping every session bar free practice and warm-up, Prado was not content with his riding. “It was tough to get a flow,” he partially grimaced, “[but] it was enough to get the job done today.” His collection of 14 holeshots have helped immensely to 17 moto wins and a second place from 18 races this season. He was unchallenged in Germany but insists his routine routing is not becoming a breeze “once you get the start it’s easier but you cannot make any mistakes.”

Gajser crashed in the first moto and gave some brief hope to pursuing Monster Energy Yamaha rider Jeremy Seewer (who’d have his own bobble and be passed by fellow Swiss and brandmate Tonus on the last lap) but the Slovenian was soon able to pull away once more. He doubled-up in the second race in what were two fairly static affairs. Gajser is confident. The Honda is also sprightly away from the metal gate, thanks to #243 claiming that HRC “worked so much to make a bike exactly how I wanted it.” He describes his level of superiority as the “cherry on the cake” compared to his feeling from 2018 and the 22-year old is clearly breathing easier in a factory-KTM-free world.

Three Monster Energy Yamaha riders—Jeremy Seewer, Arnaud Tonus, and Gautier Paulin respectively—are separated by just one point for third place in the current MXGP standings and it was the Wilvo team’s day in Germany as both Tonus (for the fifth time in a row) and Paulin made the steps behind Gajser. Seewer’s errors in the first moto and at the beginning of the second moto stopped the impressive 24-year-old from celebrating a second MXGP podium and Tonus’ career recovery continues to bloom. The former Pro Circuit man in the U.S. successfully closed a narrative at Teutschenthal. It was here in 2014 that he crashed in practice and separated his left shoulder, ending what would have been a potent bid for the MX2 championship. With second place overall, Tonus banished memories of that painful and costly trip to the medical centre, but it was not without a reminder as a ‘moment’ through the sandy section towards the end of the second race while holding third yanked the same joint. The 28-year-old was massaging the shoulder post-race.

Romain Febvre, the fourth Monster Energy Yamaha rider, was fortunate to escape a start-straight fall in the second moto. Fellow Frenchman Gautier Paulin demoted Standing Construct KTM’s Max Anstie on the final lap to enter the overall top three for the first time since round five in Italy and end a barren spell of crashes and wavering confidence.

"A few weeks and months now I haven’t been on the podium and I struggled hard,” Paulin admitted. “I had a really hard crash in Portugal and didn't have much luck in France and was back on the ground again in Russia, which was a heavy one…[but] I felt like the old Gautier Paulin at the end.”

On the subject of the serial Motocross of Nation winning country: Prado’s teammate Tom Vialle helped fill the odd chasm in the Red Bull KTM truck (Herlings and Cairoli watching from home) by taking a third podium result in his rookie season. Vialle, 18, was one of four French youngsters from the five riders in the post-race press conference that included Mathys Boisrame (EMX250 champion from last year and making his MX2 rostrum debut after a brilliant second moto runner-up slot), Stephen Rubini as the current EMX250 winner and series leader, and EMX125 victor Tom Guyon: the ‘Tricolour’ potential for future Nations glory seems in very rude health for the competition.

In just two weeks, MXGP will have to deal with the far-flung Indonesian double-header (hot both in terms of climate and fan attention from this motorcycling-obsessed corner of the globe) and there are valid questions over the attendance for both KTM and Kawasaki factory teams. Lieber’s broken elbow and Clement Desalle’s tib-fib fracture are not short-term problems. Herlings and Cairoli are also in a rush against medical estimations but the long trip to Asia would seem unrealistic. MXGP is negotiating a chronic rash of injury misfortune after the 2018 season was surprisingly mild for this kind of physical turbulence among the paddock presence.

It would be easy to point a finger at the tracks, but this is a disservice to the guiding hand of recently retired racer and former GP winner Rui Gonçalves who is ideally placed at the head of the track crew to react to the needs and concerns of the riders. Complaints have been inconsistent when it comes to the amount of watering (some saying there has been too much and others openly stating a preference for water instead of dust) and the series has passed through three of the most unforgiving sets of hard-pack in the last three rounds with St Jean D’Angely, Orlyonok, and Teutschenthal. The riders don’t appear to be very unified when it comes to safety. There are a lot of opinions but no spokesperson or semblance of a ‘body,’ such as the Safety Commission in MotoGP that meets with Dorna and the FIM usually more than once at each Grand Prix.

There is not a sole culpable factor in the harvest of health, and it is almost unthinkable to imagine the track team now without the knowledge and intelligence of Gonçalves. Alessandro Lupino’s accident in Russia came about through a collision with another rider and Jeffrey Herlings’ latest malaise was also through contact. Until Watson’s accident (which is track related as the Brit skewed off course in a slick free practice session and was thrown over the bars by one of the purpose-built ‘mounds’ to denote the course boundary) most of the attrition has hit the premier class.

“There are not many injuries in MX2 compared to MXGP,” opined local favorite Max Nagl, who did not even last one practice session after returning from knee surgery before he re-injured the leg he damaged in Argentina for the championship opener. “The tracks have not changed that much in the last few years but the bike development is unbelievable. The 450s go so fast because the suspension means you can go right through the bumps and the acceleration is massive. There is a limit with the body. Everybody is trained like an athlete but there is still a limit…whereas there doesn't appear to be one with the [bike] material. The manufacturers cannot change the bikes to make them slower but in my opinion this is the problem: the 450s are too fast these days for body to handle them on the rough tracks.”

Australian breakthrough talent Mitchell Evans sat out the second MX2 moto due to a crash in the first that left the Honda 114 Motorsports man with a sore lower back.

There was a confused state for the on-going silly season as some teams are urgently clamouring for fill-in riders while talks for the limited merry-go-round for 2020 were taking place. At least half a dozen notable MX2 athletes need to find a 450 for next year and some of the current establishment are now sweating a little more profusely. The perspiration will only increase with the trip to Asia in the next nine-ten days.