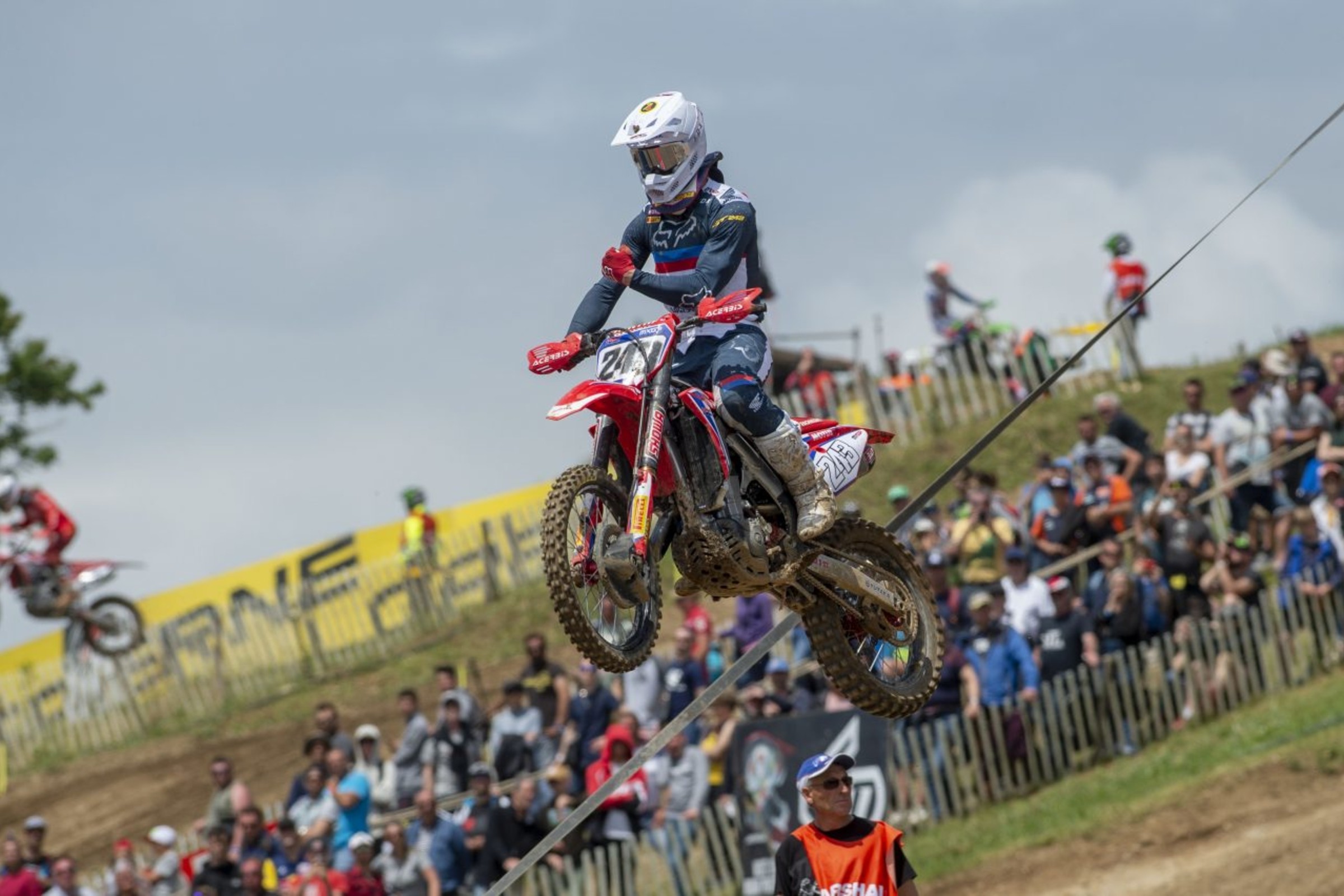 GP Report 3 Surprises at the MXGP of France

Round seven of 18 brought the series into the ruts and stony terrain of the wonderfully atmospheric St. Jean d’Angely, France, where we witnessed a mix-up in both the MXGP and the MX2 class.

Here are three things we learned from the Grand Prix of France.

Remove the KTM show of 2018 and when Antonio Cairoli and Jeffrey Herlings managed one of their eleven 1-2s of the MXGP podium that year, and the last Grand Prix at Saint Jean d’Angely in 2016 saw Honda HRC’s Tim Gajser and Monster Energy Yamaha’s Romain Febvre share moto wins with the Frenchman taking overall honours. It was thus fitting that both riders were the stars of the 2019 edition after their recent travails.

Last week in Portugal, Gajser stalked Cairoli to usurp the championship leader for a 1-1 and complete a remarkable turnaround from his disastrous set of motos at Mantova in Italy seven days previously—the first episode of this three-in-a-row run of races. This time Gajser had to deal with the rapid Yamahas of Febvre and Monster Energy Wilvo’s Arnaud Tonus (the Swiss on the box again with a 3-3). Cairoli played a part in the first moto by keeping a distant runner-up, but the Sicilian was struggling. A crash on the third corner of the qualification heat on Saturday had led to a twisted left ankle so #222 was playing the odds and maintaining his designs on the overall podium.

Gajser, Cairoli, Tonus, and a fairly static first moto was upended by the chaos of the second. More than one rider commented on the erratic start gate at St. Jean and Cairoli (as well as Rockstar Energy Husqvarna IceOne’s Pauls Jonass) was caught out. Cairoli’s chase to 11th while nursing a sensitive left limb through some brutal ruts, slick hard-pack patches and some varying lines was impressive but he crashed in a banked left turn, and later stalled the bike and survived to pass the flag in 17th for seventh overall. At the front Febvre, frantically cheered by the packed hillside “wall of noise” so characteristic of this particular circuit, was powerless to Gajser but successfully held-off Tonus.

“We don't have to panic. We have to stay healthy and keep try our best each weekend,” Cairoli said, trying to transmit a positive take on the day but it was another setback and a remarkable twist in the championship before the halfway point.

A fortnight before he had dominated his home event but then erred to rejuvenate Gasjer at Agueda, the freak events of this weekend has taken Cairoli’s lead of 40 points down to just 10.

“I am still learning, even at nearly 34,” Cairoli half-joked but his four points in the second moto was a costly reverse from the rest of his scorecard so far in 2019 where he had finished in the top two of the previous 13 outings.

On the other hand, 21-year-old Gajser deserves copious credit for his turnaround only days after a crash-tastic Italy. “I’m really happy with how things are going,” he said. “In Mantova I was setting goals of ‘I want to win, I want to win…’ and afterwards I told myself that I don't need to put that pressure. The goal now is to come to races and have fun.”

When Romain Febvre said “it has been a long road” he was not only describing the journey back from multiple fractures of his right talus bone sustained In Argentina at round one and the subsequent surgery instigating a five round lay-off, but some of the remarkable circumstances behind his 5-2 to a enrapt audience at St. Jean.

“I didn't ride all week because I’ve been sick with a fever. I came here expecting nothing,” he said through a voice still clearly trying to shrug off the effects of the virus. The first moto complicated matters further.

“I got hit by a stone and opened my eye and so blood was dripping into my goggles and I needed stitches.” Febvre dug this one out for his first trophy in almost 12 months.

Although Monster Energy Kawasaki’s Clement Desalle was also strong at St. Jean (fourth again for the Belgian) and Febvre’s teammate Jeremy Seewer banged in a second top five result—joining Tonus once more to place two Swiss at the top of the leaderboard in MXGP (the new power nation?!)—it was Febvre’s comeback only two weeks since climbing back on the Yamaha that was particularly inspiring.

The Frenchman’s progress was a contrast to the crash and low-key day from fellow Nations winning teammate Gautier Paulin (again St. Jean was unkind to #21) who was 10th overall. Febvre’s determination was driven on by frustration of having what should have been his best season since that amazing 2015 title-winning campaign wrecked in Argentina and also the looming prospect of wanting to extend his Yamaha contract into a sixth year with rumours swirling of a restructuring coming up for the Japanese factory effort.

“I feel I can still do much better,” commented the 27-year-old. Understandable considering the amount of catch-up needed but Febvre, and the imminent return of Jeffrey Herlings, mean that more characters are being added to the MXGP cast list for Cairoli and Gajser to think about.

And what about Tonus? Two podiums in a row and a competitiveness that had his mechanic boarding him with messages like “you the man.”

“I’m not sure what to expect anymore,” the Yamaha rider said. “I was so happy last week and was riding good, making passes and getting starts and then it happened again. I’m super-happy and thankful.”

Ah, so he is mortal then. Monster Energy Kemea Yamaha’s Jago Geerts became the first to break Jorge Prado in 2019, and bumped the Red Bull KTM man away from the chequered flag for the first time in ten motos, the last eight in a row. Geerts was flying in France and his pursuit of Prado in the first race and surprise attack caught the Spaniard off-guard. “I relaxed too much,” the champion admitted. “I tried to bounce back on the last lap but made a mistake.”

Any hint of nonchalance by the 18-year-old was scrubbed away in the break. “I was frustrated… but Claudio [De Carli, team manager] said ‘Don't worry, you have been winning everything so if you take second then no problem’ but when I know I can win, I like to win! And I felt like I threw it away in that first moto. I was not nervous coming to the second one because I knew what I could do.”

Cue a ninth holeshot (KTM now holds 13 in 14 starts in 2019) and normal services resumed. Geerts passed teammate Ben Watson and set-about creating another finale but a brief front-end tuck cost valuable seconds and Prado, radiating red, white, and blue in new Answer Racing gear, was much more careful about managing his advantage at the front. The streak of moto wins might have gone but Prado is still unbeaten for overall triumphs. Third place for title rival Thomas Kjer Olsen (the Rockstar Energy Husqvarna rider battling to a 3-5 from mediocre starts) meant a small increase in his MX2 lead that now rests at 14 points.

“Like I said last week, it is not easy to go 1-1 all the time, especially with a guy like him [Geerts] that comes in with two laps,” Prado said. “We will keep working and improving so that doesn't happen too often.”

This was 19-year-old Geerts’ best performance in what is just his second Grand Prix year and offered fleeting hope that the shy Belgian can compete with his former 85cc rival on a regular basis. Honda 114 Motorsport’s Mitchell Evans (fourth) again consolidated his case as one of the breakthrough riders in 2019 so far and F&H Kawasaki’s Adam Sterry made the top five as his teammate Henry Jacobi struggled—a crash in the second moto the low point.

From south, west, and central Europe, MXGP now heads further afield. The weaving hard-pack of Orlyonok will stage the Grand Prix of Russia in two weeks and begins another triple that also takes in former Motocross of Nations venues Kegums (Latvia) and Teutschenthal (Germany).