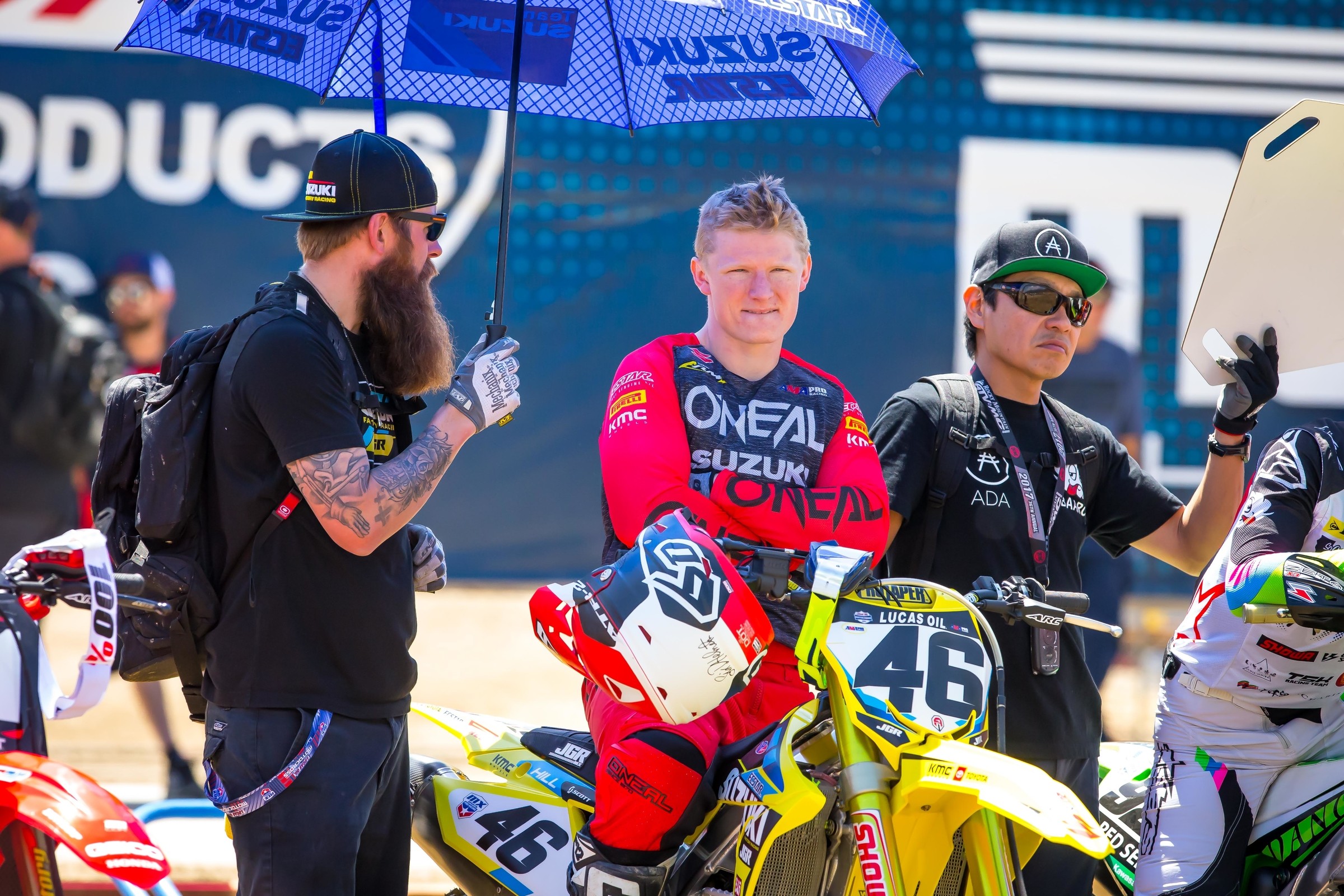 Between the Motos Justin Hill

JGR/Yoshimura Suzuki’s Justin Hill has spent years saying he’s a better rider on a 450 than a 250, and in a few shots on the big bike last year, he showed speed, earning four top-ten finishes, including one top-five finish, and a near-podium at Washougal until a late crash. Also, there was that magical night at the Tampa Supercross.

Yet, his rookie 450 season has not gone well. Besides a few qualifying flashes, his Monster Energy AMA Supercross results never really showed his talent, and he wasn’t happy with his 21st-place finish at Hangtown (16-21 moto finishes) for the opening of Lucas Oil AMA Pro Motocross.

Hill got deep about his mental struggles this year in a revealing interview a few days ago on DMXS Radio. He said he’s doing everything in his power to at least know he tried to fix it—so even if the results don’t come, he won’t regret having left things on the table.

This week he logged a lot of riding with his brother Josh, and there was a small sign of a turnaround. Hill recorded 8-7 finishes at Fox Raceway at Pala to earn a seventh overall. We caught with him after the race.

"Last weekend was such a disappointment, and I just didn’t stop grinding," Hill said. "I went back out and kept riding. I didn’t want to sit at home and reflect on how bad it really was. I just wanted to get back out, put work in, and do my best to improve. I rode, rode, and rode. I only took Wednesday off from riding, and it helped get my mind right, along with other things, like encouragement from the people who’ve been helping me. This is just a step, but it’s finally a step toward what I want. I could be out here doing this, risking myself for nothing, to be in the back, where I’m not a happy person because I’m failing, or I can put my best foot forward, improve, and get to where I’m happy with me. It’s just an internal thing.

Racer X: Is there anything else you can put your finger on that’s made the difference this weekend?
Justin Hill: There’s a noticeable physical difference. My brother and I worked on the little details. Josh just went out with me, rode with me, and brought it back to square one. We just did dumb little stuff, like rolling my bars forward to broaden my shoulders out a little bit. We kind of tried to get my front end up and my rear end down, because it’s a little too hoppy in the rear. We worked on that, and the team expanded on that today. I expanded on it with Johnny Oler [team’s 450 suspension technician] today and he did a great job. It was just basic stuff. Josh said, "Dude, this isn’t you. Let’s go back to what we know. You just seem lost." I think that was probably the biggest thing in the week. And I just kind of accepted that I need to talk to a guy about my attitude and mental state. I think I’m a pretty self-sufficient person and I like to tackle things on my own. I like to figure things out, and I’m probably the last guy to say he needs help. But I kind of kicked all that out and I was like, "You know what? Let’s see someone who can help." Obviously, what I’m doing wasn’t working, and self-diagnosing isn’t working. I invested a little bit of time in that with Weston’s [Peick] guy this week. He gave me some words to repeat, and some little secret things he likes to help us with. That helped big too. It’s just a bunch of little pieces. Also, my willingness to go look for a fight out there and not just be complacent.

You mean like battling for spots?
Exactly. I’m watching races and videos of myself and it’s like, "Dude, I look like a wimp!" But I’m not, I’m a tough dude and I don’t need people thinking that. Someone asked me a funny question. They said, "What are you scared of? Are you scared of these dudes trying to come beat you up after the race?" No, not one bit. That’s the last thing I’m worried about. So it’s like, yeah, let’s go shake some things up, let’s go do it! It seems like it’s working, at least for this weekend. I’m more comfortable, and we got the bike sorted out for this track. I think it’s going to help next weekend too; I think the setup is going to help out there in Colorado. It’s a combination of a lot of things, but most importantly, to summarize, Josh helped me with little stuff and my mental state, my willingness to say, "Let’s do this. Let’s get out there and mix it up and not be afraid."