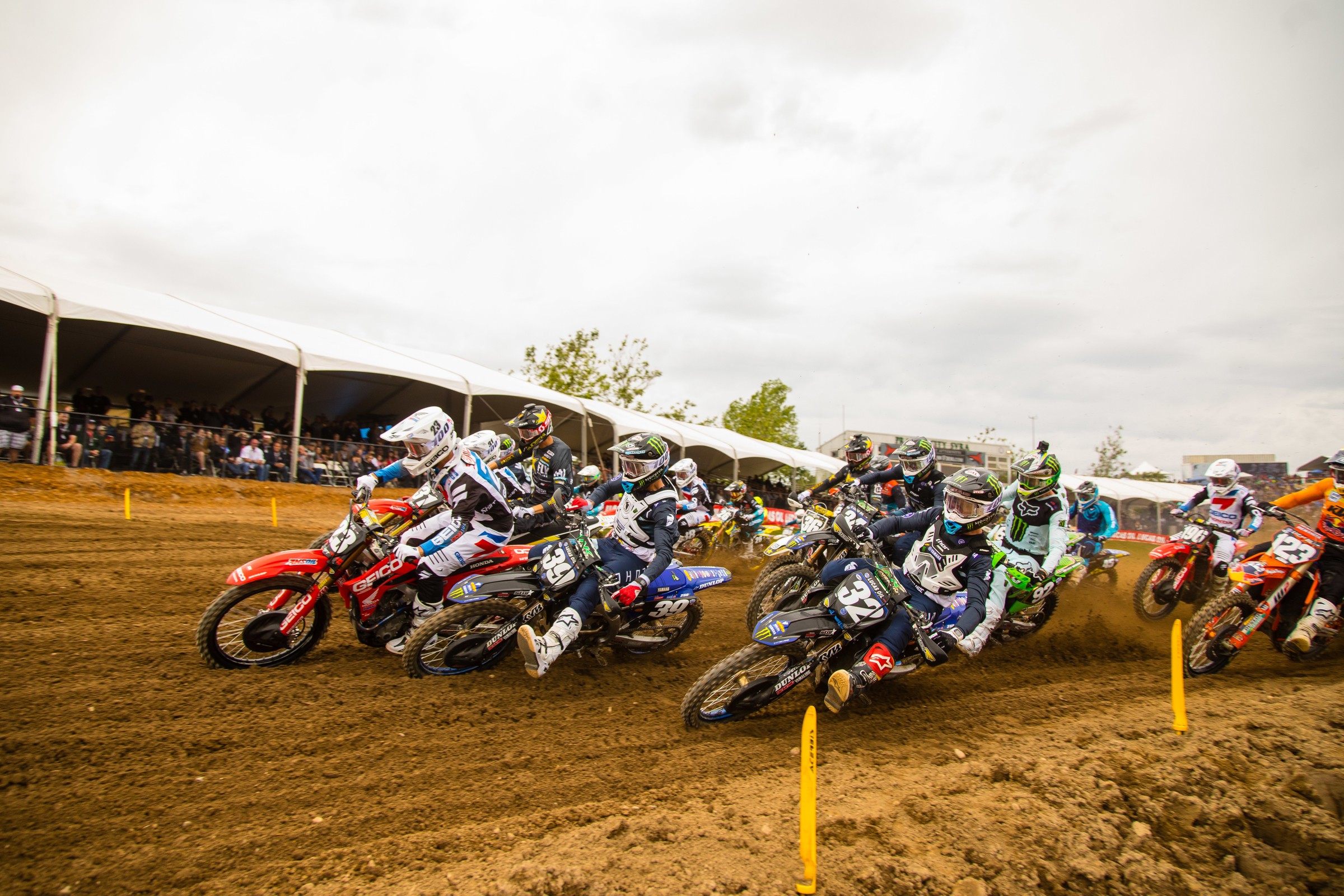 We’re once again firing off questions at long-time pro Jason Thomas for some opinions on the opener.

It wasn’t hot or super rough at the opener, but Ken Roczen was great. Did he answer any questions about his physical condition?

I don’t know if he really answered the questions about his physical ailments but he certainly served notice that his speed of yesteryear is back. Last year’s Lucas Oil AMA Pro Motocross Championship was a work in progress as he entered the series underprepared. Last Saturday was a totally different story altogether. He was the fastest rider of the day, dominating the first moto and hanging tough in the muddy second moto. I don’t know that anyone expected that type of speed advantage from the 94, maybe not even he himself.

As for the races to come, it’s difficult to predict how he will respond. This weekend’s event in Pala will be nice and cool again (high of 68 predicted on Saturday). The following weekend in Lakewood, Colorado, is looking to be in the low 70s during the motos. So, realistically, we may be nearly a month away from the first real answer on how heat and humidity will affect the 2014 and 2016 champ. Even then, the High Point National in southern Pennsylvania is not known as a scorcher. For me, the first guaranteed test will be down at WW Ranch in Florida on June 22. There will be no escaping the heat that weekend. Even if it rains, the heat will be a factor some time during the day. Maybe Roczen has turned the corner and just needed this change to outdoors but we may not even know for another month.

Were you surprised that Adam Cianciarulo was able to bounce back from his Las Vegas heartbreak so quickly?

No, I think it gave him something to focus on. A nightmare like the Las Vegas crash can go two different ways. It can cripple you emotionally, draining all the confidence built up throughout a great season. Or, it can ignite a fire. I really believe there are only those two options in the wake of such a tough blow.

Even if he didn’t win, the way he rode was a clear signal that he wanted redemption this summer. He wasn’t moping around feeling sorry for himself. He came out swinging. His demeanor spoke volumes about his character. He acknowledged his mistake, took a couple of days to swallow it, and turned his focus to the task ahead. Many have noticed that Adam shows wisdom beyond his years, but this latest adversity may be the best example yet. Win or lose, he has my respect.

Dylan Ferrandis wasn’t able to move forward in the mud moto and even lost a spot or two late. Any cause for concern?

No, mud is always difficult and open to a wide range of variables. Early in that mud moto, Ferrandis’ entire body was covered in mud while many others around him were much cleaner. I wondered even in those early laps if that would take a toll on his eyes, glove grip, seat grip, etc. His lap times suffered at the end of the moto, as did everyone’s, but I think most expected him to shine in those conditions. He looked very good in timed qualifying and rode well in the first moto, so I am going to just wait and see on Ferrandis. Hangtown has rarely been a great indicator for how a season will go, let alone a mud moto.

What’s it like lining up for a moto when you know it might go from dry to mud during the middle of it?

It’s not ideal, obviously. There’s not a lot anyone can do about it but there some small adjustments that help. Choosing a tire that will work in both conditions can help, although it might be a bit of compromise in both situations. Most riders use the same tire on every track these days so they might not even have changed anything. If the track was super hard and slippery, though, and a rider was using a hard-packed front tire for a normal moto, maybe he could move to a more intermediate in case the rain did come. The early laps would be a compromise but the muddy second half of the moto would be manageable versus the original tire choice.

If rain was a possibility, I would also just go straight to roll-offs. Tear-offs are nice and give a new field of vision with each pull but roll-offs are a better option in my experience. Roll-offs have more pulls and aren’t as temperamental as tear offs in adverse conditions. I never found roll-offs to be a nuisance like some riders do, so I always chose roll-offs in any iffy conditions.

Zach Osborne’s second moto didn’t get a lot of attention, but he rode very well. Thoughts?

He was incredibly good. He was 16th at the end of the first lap and moved forward steadily throughout the moto. He made a last lap pass on his training partner Marvin Musquin and was putting in lap times similar to the leaders. I expected him to be good after dominating this race in the 250 Class last season but I wasn’t expecting mud to actually help his results. He might be a bigger player in this series than most penciled him in for.

What is going on with Thomas Covington?

I wish I knew. I would probably guess that he isn’t 100 percent comfortable with his motorcycle and that is holding back his best form. When riders are that far off the expected pace, it’s usually a lack of confidence in what the motorcycle is going to do in a given situation. To go as fast as he needs to go, there can be no doubt. Surely there is a lot of urgency this week to find answers so let’s see what they come up with for Pala.

Did you expect Jason Anderson to be that good?

No! He only started riding on April 1 after a tough arm injury. I figured he would slot in around fifth or so and try to improve each race. He was having none of that, though, putting in a runner-up finish in that first dry moto. His fifth in the second moto was good enough for a third overall and I would guess a smile from his team. I was impressed.

What happened to Marv?

He mentioned in the post-race comments that he had a huge crash in practice and was lucky to be racing. Crashes like that usually take a few percent off a rider’s peak performance. Instead of thinking how to win the race, it goes to management/salvage mode for the rest of the day. He wasn’t bad but he wasn’t his best self either. I expect him to bounce back with a podium in Pala.

Overall, how many conclusions can be drawn from the first round?

I never like to take too much from Hangtown. Even though Tomac won the title AND Hangtown in 2017 and 2018, I have just seen too much variance from the first round to the rest of the series. Most riders are trying to work out the bugs in their bikes, their bodies, and their minds after a long supercross season.

Hangtown’s track is very different than most of the series and it’s just too early to know how things will look in a month. Riders like Blake Baggett have struggled at Hangtown and then been on winning form by Colorado. Ryan Dungey went 7-7 at Hangtown in 2010 and then dominated the rest of the summer. It can go both ways.

Tomac and Osborne won Hangtown in 2017 and 2018 and it did bode well for them (minus Osborne shoulder injury). Mike Alessi won Hangtown in 2009, Chad Reed won in 2010, James Stewart won in 2012, and Ryan Dungey won in 2011. None of those riders won the title in those years. It’s the opening round in the midst of changing literally everything. Let’s see what the next few rounds bring.