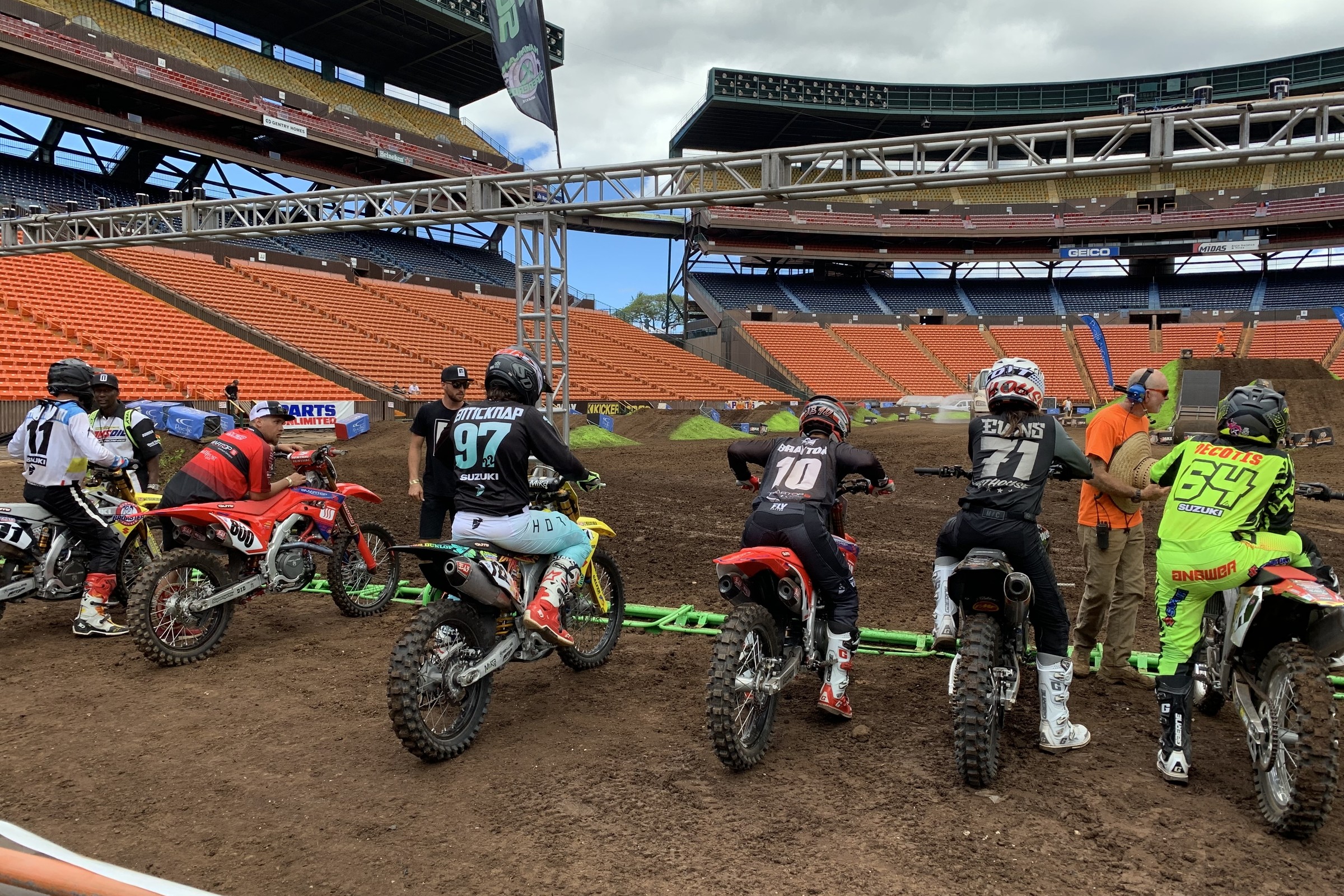 After finishes of 5-13-11, Jimmy Decotis earned 11th place overall in the return of the Hawaiian SX. He borrowed a brand-new 2014 Suzuki RM-Z450 for the event but was able to put a good qualifying time in, and even led laps in the first race of the Triple Crown format. Decotis, who is still dealing with Lyme Disease according to an Instagram post, eventually fell, and said he was "pretty shot" after the first race.

Racer X: Brand-new bike, 2014, factory forks, stock shock, stock exhaust, stock tires. You pulled a good qualifying time out of it. Your whole night could have been different if you hadn't fallen after Ryan Sipes got you.
Jimmy Decotis: Yeah, I think so. I’ve been a little sick with my Lyme [Disease] stuff. So after that first one, I was pretty shot. That second one I struggled. We had a good break before the third one. I actually felt like I recovered and rode good in it, but I just crashed on the start. You're done at that point.

Were you surprising yourself with moto one?
No. I knew could I do it. I knew I could beat these guys. It was just about how this bike didn’t work in these conditions and stuff. So I was happy with that first one. I did surprise myself a little bit just being on this bike. I’ve never ridden a 450 really, so to come here and have no time and do that, I felt like if there was 20 more feet it would have been cool to get a one on the night. It is what it is. It looks shitty now that I crashed, but if I had won that one it would have been a good one.

Way too much fun racing @hawaiiansupercross this weekend. Picked up a stock 450 for the weekend and tossed my suspension on her. Had the main event 1 win in the bag but ole @r_sipes used his all around Moto skills and made a last turn pass on me. Bad starts and a couple crashes took me out of the other 2 main events for a good overall finish, However I got to meet some amazing Hawaiian fans and see the culture over here. It is truly one of a kind. Thank you @montgomerypowersports & Myron for loaning me this bike! Thanks @duffe38 for helping me out and all the people back home keeping me on 2 wheels.. @jgrmx @suzukicycles @answerracing @araiamericas @scottmotosports @gaerneusa @dedicatedrideco

How were the six-year-old Bridgestones?
They were good. I'm a Dunlop guy, so I'm going to say they suck, but I didn’t mind them.

I actually thought your shock looked alright.
I thought it was good. I thought I was killing the whoops.

It was very bizarre to see that.
It was. I was a little bit surprised, but I’ve done a lot of local races in my life so this kind of felt like that. I feel like I'm pretty good at that stuff. It is what it is. It was a fun night. I’m happy I showed a little speed on the 450.

You really could have killed it that first one, damn it!
I’ve never been so bummed to not win a race and not change/money or anything. I still get paid the same money and I’m still so bummed. I can’t imagine what Coop [Cooper Webb] felt at MXoN [in 2016] or [Adam] Cianciarulo last weekend. That shit’s gnarly.