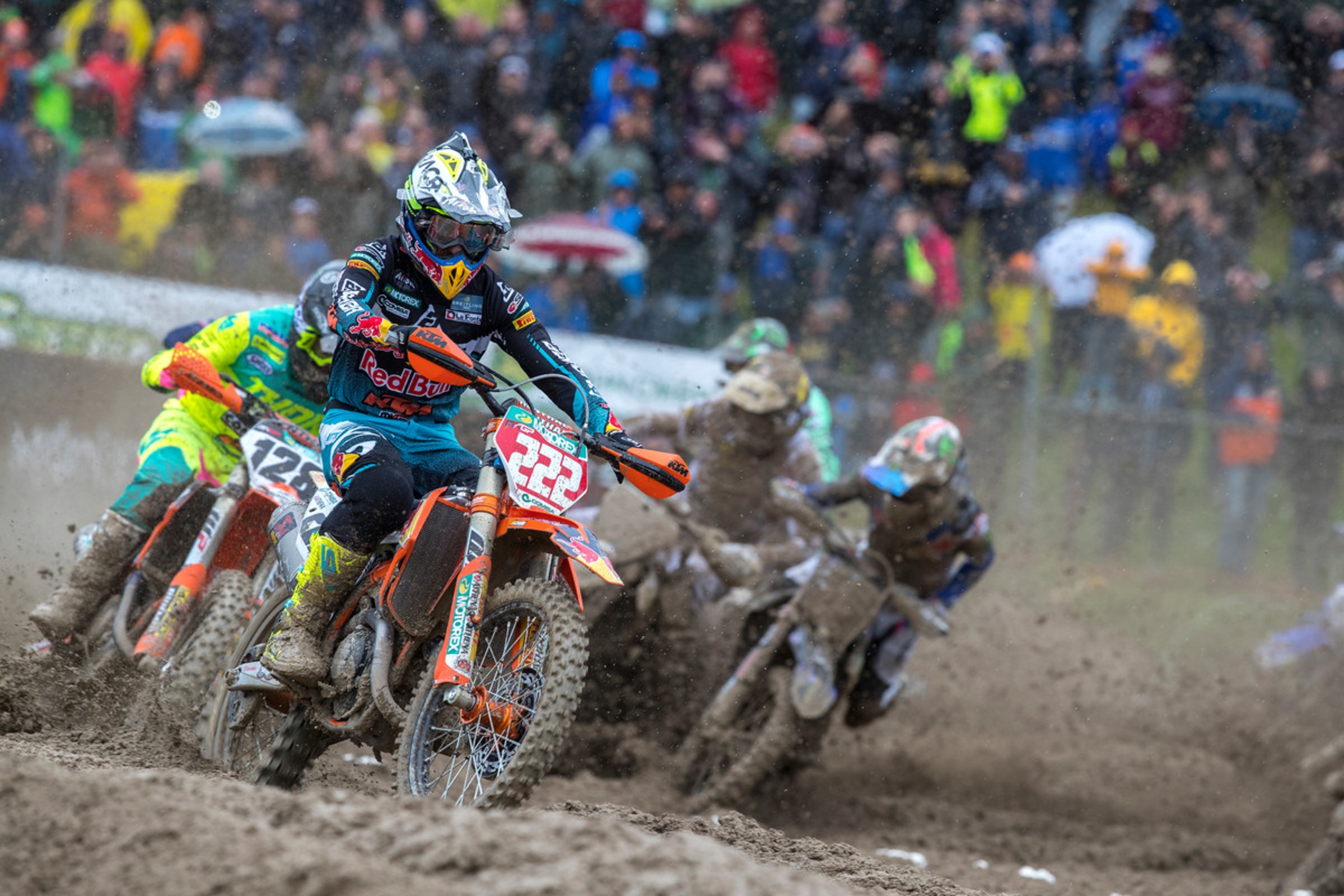 GP Report 3 Things We Learned at the MXGP of Lombardia

Grand Prix was washed back to alertness with an incessant gentle rain that created swampy and treacherous conditions for the fifth round of 18 in Italy. MXGP had previously weathered a curious spell of a month without racing thanks to the 2020 postponement of the MXGP of Hong Kong and the displacement of the inaugural Chinese event to the end of the calendar. Riders like Clement Desalle, Calvin Vlaanderen, Pauls Jonass, and Gautier Paulin were grateful for the break to either recover or revise their technical set-ups while others like Tim Gajser (who had halted Antonio Cairoli in round four) or the entire Red Bull KTM roster were frustrated by the hiatus that evergreen Cairoli described as a “distraction.”

Nevertheless it was a bruising return to the fray and here are some of the talking points.

Last year was a gluttonous haul of numbers for the world champions and 2019—even without the absent Jeffrey Herlings—is already starting to total up. Between Antonio Cairoli, Jorge Prado, and Tom Vialle, Red Bull KTM seized all four holeshots at Mantova—an indispensable key for the break away from the front of a pack that was otherwise submerged in roost, watery sand, and at the mercy of other riders toppling over in close proximity.

Cairoli and Prado had no peer in their respective 1-1 performances. Cairoli now has four Grand Prix overall wins from five and seven motos from ten. He has 89 career triumphs and inches closer to Stefan Everts’ record of 101 every time he jabs the electric starter of the 450 SX-F.

Prado is even more impressive. He may have missed the British Grand Prix due to a brief shoulder ailment but has won all eight of his moto appearances to date—and at a canter. It was only Rockstar Energy Husqvarna’s Thomas Kjer Olsen and the Dane’s stubbornness to concede points (he was caught up in a first turn pile-up in the first MX2 moto but flew back to sixth—using the new Goggle Lane facility in the process) that helped the tall championship leader retain his red plate for another week. Olsen how has four podium finishes and has to find some solution to Prado’s superiority.

In MXGP Cairoli now has a dwarfing 40-point lead over Gajser. The Slovenian had a miserable day with numerous crashes (six? seven?) between both motos and all of his buoyancy and momentum from Trentino and the previous fixture seemed to trickle away like the sand into the many puddles at Mantova.

Watching the intensity, technique, and flow of both Cairoli and Prado (as well as the easy and brotherly vibe between the pair around the awning) it’s clear that training and riding together has had an obvious benefit. Cairoli is prompted by Prado’s youth, energy, and competitiveness while the Spaniard continually learns lessons from the master.

“With Jorge it is always full-gas every week,” Cairoli says smiling. “He is always pushing and pushing and I cannot relax. For sure it is good. We always ride and train together and it helps during the week and for him also. It’s a nice match.”

The Baker’s Factory has cooked another fine product in the U.S. with Cooper Webb this year and Claudio De Carli’s Rome-based operation with #222 and #61 is proving to be equally delectable in its output. For Cairoli at least, he has a training partner that is reaching his equal in several aspects: starts, technique, confidence, and audacity.

As an aside, Jeffrey Herlings had been attempting some easy and short moto runs only a week before the Grand Prix and his return from a broken right foot could add another dimension to the MXGP class and will only bolster the orange menace further. Herlings will push for wins when he is ready but will also be asked to play as Cairoli’s wingman. If Prado proves to be unstoppable in MX2 then all three will be together in MXGP in 2019 and the rest of the field might as well play in the sand.

The quirk of an unsettled calendar in 2019 meant that MXGP faced two Italian rounds back-to-back and with some awkward timing as the renowned bicycle race—the Giro d’Italia—was setting off from the nearby city of Bologna and the WorldSBK series (that was also battered by the rain) was occurring at Imola, less than two hours from Mantova. In spite of the forecast (the storms on Saturday night that sent awnings rolling through the paddock) and the gloomy and leaky skies from dawn to dusk on Sunday, the turnout from the public at the circuit was encouraging. Cairoli appeased the masses with his fourth career success at the distinctive sandbox venue and the country is most definitely in throes to the MXGP icon that is stirring up yet more excitement in 2019 as the prospect of a record-equalling 10th title seems more and more realistic.

Mantova/Lombardia (the event is named after the region) was the second of three Italian meetings on the MXGP slate: the last will see the Autodromo Internazionale Enzo e Dino Ferrari at Imola again in action for the second year in a row and where the very first e-bicycle world cup will take place in mid-August.

Mantova’s reputation as an “all-weather” site was tested to the fore. On Saturday there was a degree of dismay among the riders with a hard and dry sandy layout yielding little in the way of lines or options. Expecting rain, the track crew had not worked-over the surface and subsequently the maintenance carried out on Sunday—when the water did arrive—to preserve and heighten safety was utterly commendable. Slower, very rutty, deceptive with the lines, holes and edges, Mantova was two tracks in two days and the state of play assisted good starters, those able to keep perpendicular, and whose machinery lasted the distance.

Profiting ably was Rockstar Energy IceOne Husqvarna’s Pauls Jonass and Arminas Jasikonis, the former earning his first MXGP trophy in just his fifth appearance and still playing catch-up in the class after missing preseason due to knee surgery. In MX2 Holland’s Davy Pootjes (branded as the “next Herlings” as early as 2015) finally shirked free of the misfortune with injuries (shoulder complaints) and damaged self-esteem to make the top three for the first time “it should have happened four years ago” he stated.

The terrain was a blessing for Honda HRC’s Brian Bogers—another injury-hit Dutchman but a bright start and consistent speed meant a strong second moto in the runner-up slot—and Vialle’s second moto MX2 holeshot allowed the French teenager to rescue his day and weekend with third spot (he had crashed and hurt his left knee cap and left thumb on Saturday and was overly cautious in the opening race).

Desalle banked a top five finish in his first serious bike action after right meniscus surgery (assisted by Mantova’s curling majority of left-handed corners) and the sand was also kind to Standing Construct KTM’s Glenn Coldenhoff (fifth overall) as the Dutchman edged closer to that Motocross of Nations pomp since recovering from a vertebra injury in the winter. His teammates Max Anstie and Ivo Monticelli were less fortunate. The Italian—one of the biggest revelations in MXGP so far—broke down in the first moto and crashed early in the second. Anstie slipped out of an easy second place in the first and was then tagged by Shaun Simpson in the second and seemed to struggle with a sore hip.

Special mentions include bright Australian rookie in MX2, Mitchell Evans, who with fourth place overall continues to show that he is filling Hunter Lawrence’s shoes quite nicely at Honda 114 Motorsports and Spaniard Iker Larranaga who both survived the skirmishes and chaos that collected names like Henry Jacobi (second moto DNF) and Jago Geerts (second moto crash).

The wonderfully distinctive Agueda circuit and the red soil awaits next weekend for MXGP, another location where Red Bull KTM did the double last summer.