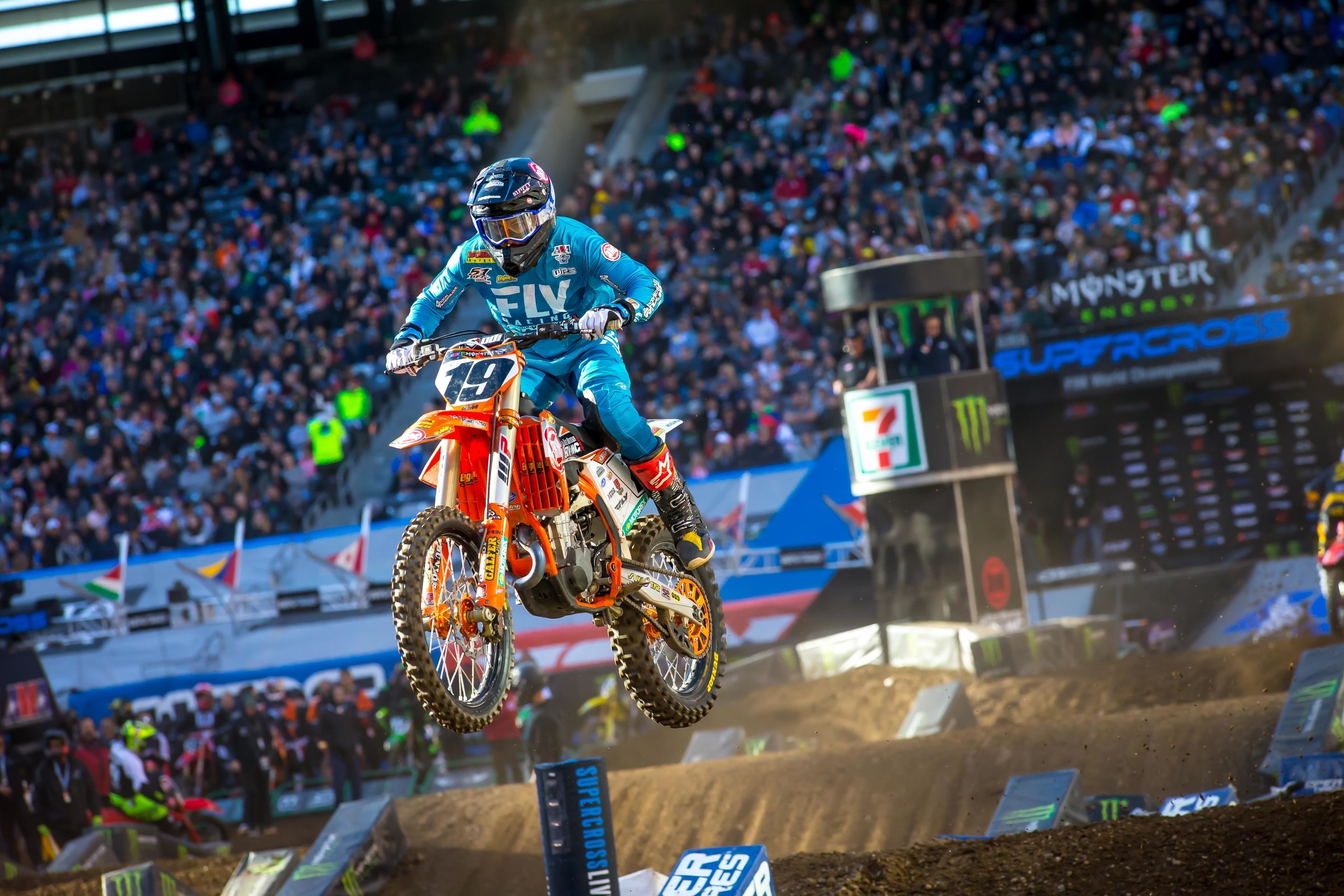 Between the Motos Justin Bogle

Justin Bogle right now isn’t the Justin Bogle that started the season of Monster Energy AMA Supercross on January 5 in Angel Stadium. The Justin Bogle at Anaheim 1 finished in 19th, wasn’t comfortable on the KTM (Bogle was with JGR/Suzuki last season), wasn’t in shape enough to finish a full main event and just wasn’t himself. But alas, recently the old, normal—well to his standard of it—Justin Bogle has returned and so has his confidence. He’s won two heat races in as many rounds, finished fourth in Nashville, and has jelled well with tracks that most riders haven’t.

While mechanical issue and a crash caused his night to end early last Saturday in East Rutherford, the Rocky Mountain ATV/MC-KTM-WPS rider is having fun. His end goal is winning but he knows it’s a process and he’s just enjoying all of it.

Racer X: Hey, another heat race win, here we are in New Jersey, you pulled it through, nice work. That’s got to feel awesome.
Justin Bogle: Yeah man, it really does. Like I’ve been saying, I’ve been having fun and I’m enjoying this process. It feels good to start to feel like myself again, which I haven’t been able to show in a couple of years, you know.

You went back at ET [Eli Tomac] a little bit there when he got you.
Yeah, confidence is coming back. I belong up there—I haven’t got to show it in a long time, so everyone will think you’re crazy by thinking that until you do it but I truly, truly believe in myself, so it just takes time. It just takes time. It’s coming around and it’s a beautiful thing.

You threw a half-nac.
Yeah, I don’t know what that was. It was honestly like my brain popped a fuse up the face and I’m like I don’t really know what I’m going to do and I threw kind of like a little, I don’t know if you’ve seen that Terrafirma where Pedro Gonzalez does that like hip-jump and he does a nac nac like.

I saw it but a long time ago.
I don’t know, I always just called it the under nac that Pedro did and it was super fire and that’s kinda what I did. But yeah, I’m having fun, man.

Alright, main event. Someone in the press box goes “Bogle just tossed his glove off,” but it wasn’t your glove, it was your wrist brace.
Yeah, I had a problem with my wrist brace in the first corner, just bumping into guys. And then I had a mechanical issue early in that thing and I was trying to ride it out and I ended up going down because of it. Once I got up I knew what it was.

Did you blame “Jericho” [his mechanic Derek Rankin]?
It wasn’t Jericho’s fault, you know what I’m saying. Shit happens. But it definitely was a bummer because I believe I was a podium threat, but it is what it is. We’ll get ‘em next week, right. Stuff happens. Yeah, I was trying to ride it out and then I went down from it and it was sketchy to ride with so I pulled it in.

Yeah, that’s unfortunate for sure but like build on the positives, heat race, everything else. So you’re one of the last guys I’ve interviewed tonight, no liked the track and it wasn’t a layout issue, it was a dirt issue, like no one was stoked.
I honestly… I kind of liked it. I don’t know, it’s been fun but it’s because I can feel like myself and I can move around and I can jump stuff. And I’m just not nervous to try different things and that was always a strength of mine before and I lost that just with being so damn nervous out there when I’ve been racing. And that’s coming back so it makes it a lot more fun when the track gets sketchy. And the track was tough. But far from hating it, I mean it is what it is. Like last round was super dry but I kind of liked that too, it was interesting it was a little different. I don’t know, I like that better than just the track always being the same, you got to think a little bit, you know.

Did you eye up that 3-4?
Uh, after the second set of the whoops?

Yeah.
I was jumping it with broken forks and no clutch lever.

You were? Oh, I didn’t see you jump it, my bad. I need to give you props.
I jumped it in the heat race.

Okay, I got to pay more attention because I was making a list of the guys that were doing it and I didn’t see it.
Yeah, Eli jumped it in front and then I did it the next lap, in the heat. I was doing it in the main and then I had a suspension issue and the forks like broke and I jumped it anyways just to do it. [Laughs].

So how was that thing?
It was so much fun. When I pulled off I told Byrner [Michael Byrne, team manager], I’m like dude, that’s the best section because you can go slower but still go the same speed. Like it’s quicker, you can just float it and have fun, you jump one less time. I love stuff like that.

Yeah, it’s technical, it’s kind of right up your alley, that’s why I mentioned it, because that would be something you would do. I’m just an idiot, I didn’t see it. [Zach] Osborne told me the three in was tricky but once you did that, nailed that, the four was pretty relatively easy.
Yeah, it was super easy to get the four if you just cleaned the three. But it was fun, man. Like I said I’m feeling more like myself so stuff like that isn’t scary to try. It’s tough for sure, but it’s also really doing stuff like that. That’s what makes supercross fun to me: being able to be creative and be able to kind of jump stuff.

Or Nashville that jump that didn’t really work out, but you were doing the 3-3 to start.
Yeah, but it’s really, really cool to be able to try stuff. Like first practices are so fun for me because I’ll jump everything early, second or third lap or whatever and then I’ll try something else. And then I’ll do a lap and then try something else. It’s just fun. I like when they give options too, there’s a couple of options lately in the rhythms—whether they end up being the fast lane or not, obviously there’s always a fast line but there’s things you can try—and that just makes this stuff fun for me, just being able to be creative. And being comfortable on this motorcycle helps a lot with that.

I remember being a mechanic and there were sections like that, we didn’t have Dartfish, we didn’t have video, we didn’t have anything, so you didn’t really know what was faster other than your tubby finger trying to time it. You would have been better in that era, when no one knew the ultimate fast line, it was just “Let’s try all sorts of weird shit.”
I would have enjoyed that because even in Denver, I was doing a table over two in the middle and it was not faster but it was fun to try and to jump it and feel it. To me, that’s just my confidence coming back and I’m just so thankful for that, man. I’m so thankful to just be on this incredible team and just being healthy. Man, I’m having a great time.

Well it took 16 weeks but we finally did a walk-in together. I was very proud of that. I was the every man with the hoodie and cargos and you were wearing whatever it is you were wearing. But it was good to see that. I’m like that you were happy to represent the every man with me.
Dude, I’ve been waiting for the collab for weeks now. I’m so amped. And honestly, if you go look at any of our Instagrams, people were loving it. Yeah, it was awesome.

I think they were, like I said, I’ve got lots of pockets so if you need me to hold your stuff.
Dude, I’m telling you, your comments on your Instagram were killing me. They were so funny. I responded to half of them, they were so funny. [Laughs]

Well, you know my fans are older so they’re like “What the hell is Bogle doing?!”
I love it. Like I said earlier, if you’re going to roast me, as long as it’s done tastefully, I think it’s hilarious. It’s so funny. [Laughs]

No, I don’t think our demographics really match up but it was fun to do, so it was cool, thank you.
Yeah!